Smiling for the camera, smoking a cigarette, relaxing with friends and even taking part in a wedding – war seems to be the last thing on the minds of these North Korean soldiers.

But these are the conscripted men and women that Kim Jong Un will rely on to fight America and its allies should war break out on the Korean Peninsula.

The fascinating pictures were captured by photographer Pierre Depont, from Cornwall, who has travelled to the hermit kingdom seven times in order to capture the lives of its citizens. 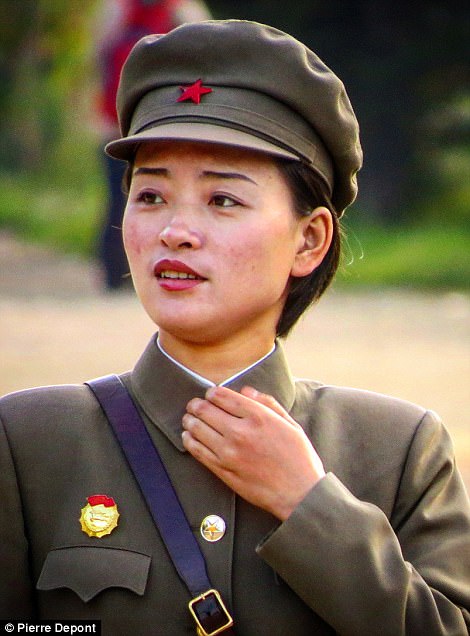 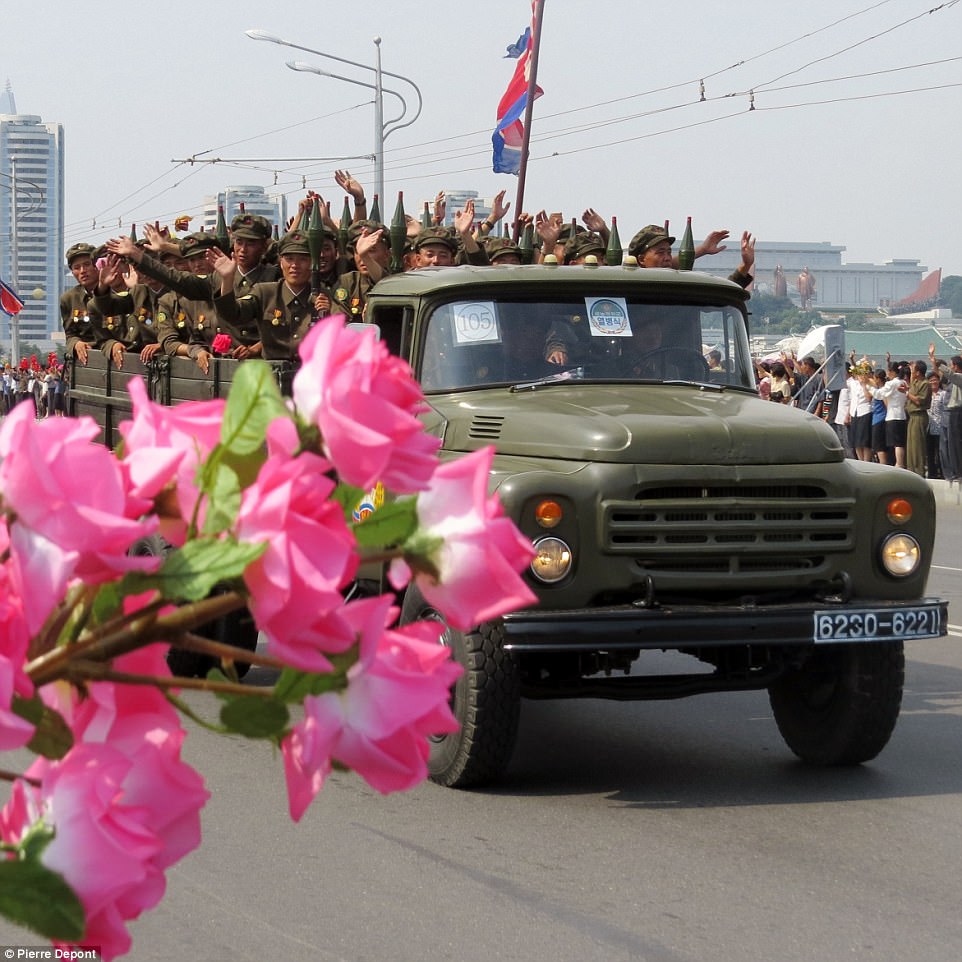 North Korea has one of the largest standing armies in the world, with more than 1 million personnel in active service and another 6 million reservists ready to be called up 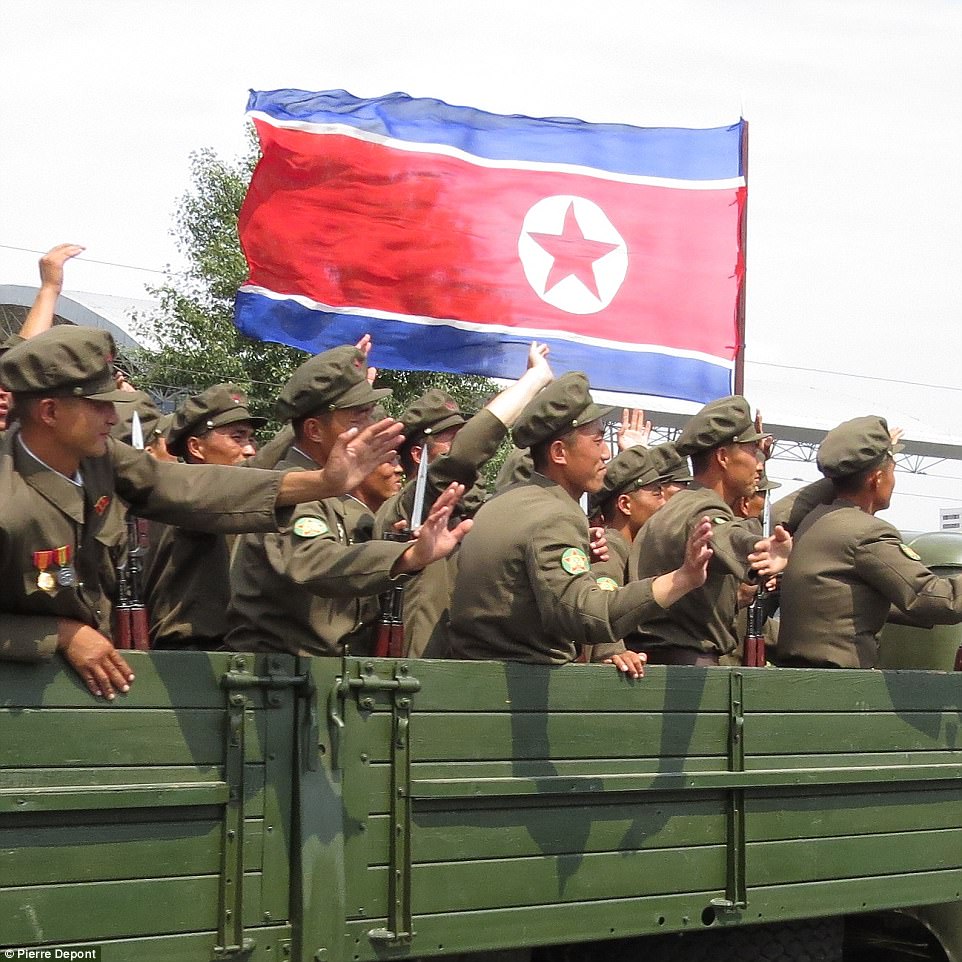 Most men and some women are conscripted into the North Korean military for 10-year terms. Serving in the military is viewed as a great honour, and shows loyalty to the regime 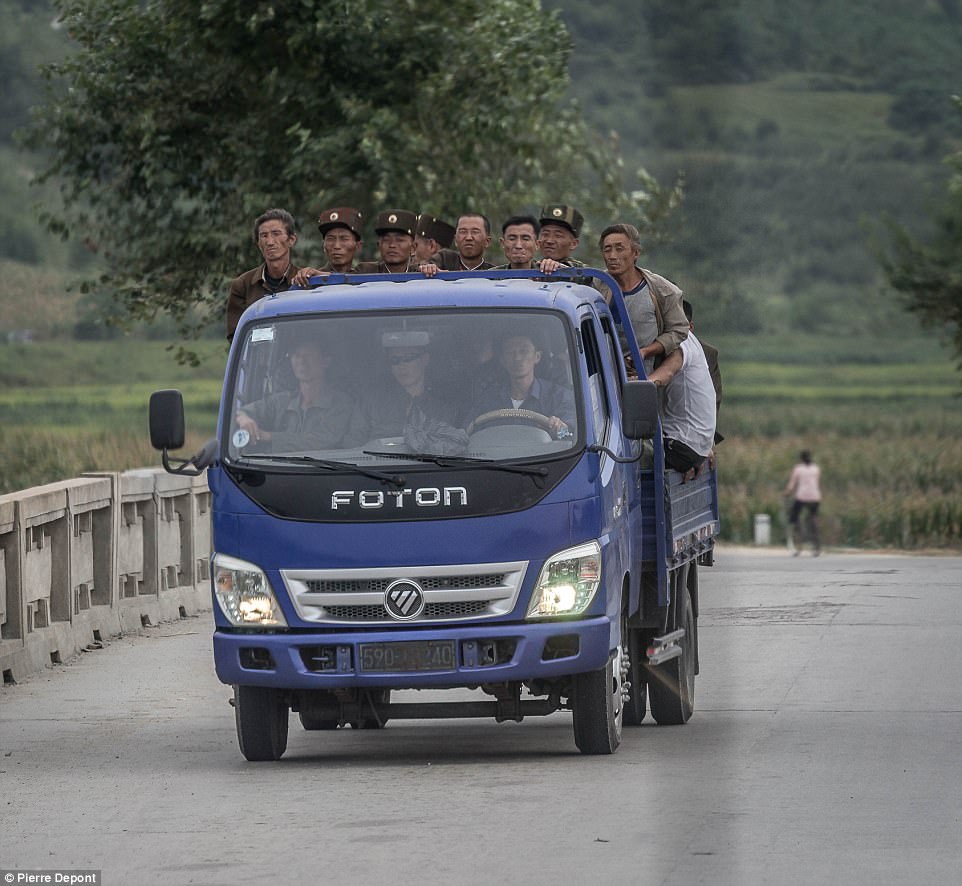 What North Korea’s military has in numbers, it lacks in technology and equipment, with much of it dating from the 1940s and 50s when the army was first formed, or bought on the cheap from neighbouring countries 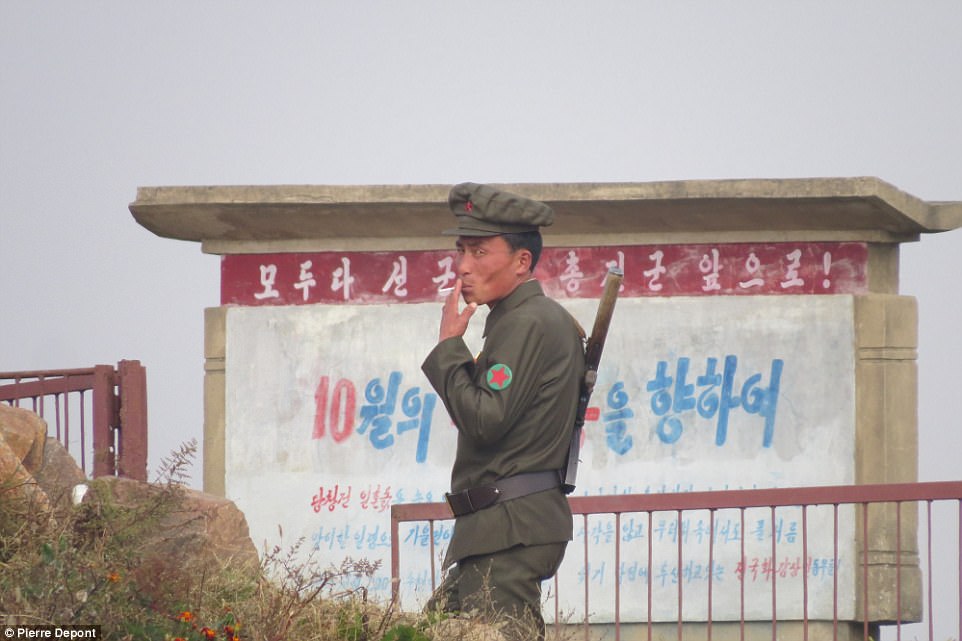 These pictures were taken by Pierre Depont, a photographer from Cornwall, who has visited the hermit kingdom seven times in order to capture the lives of its citizens 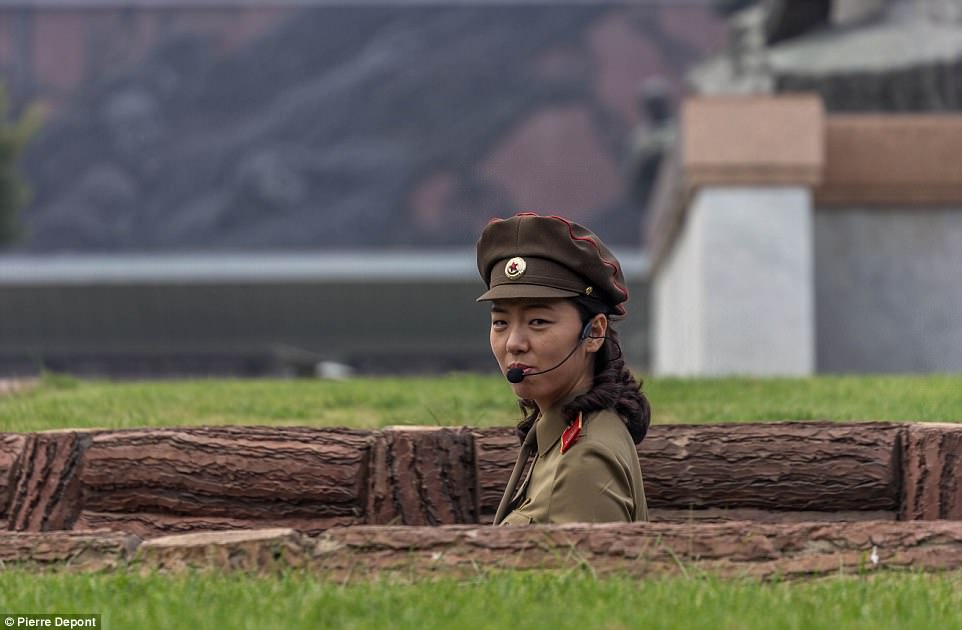 Both men and women of fighting age are expected to serve in the North Korean military, with defense of the country written into the constitution as the primary duty of citizens 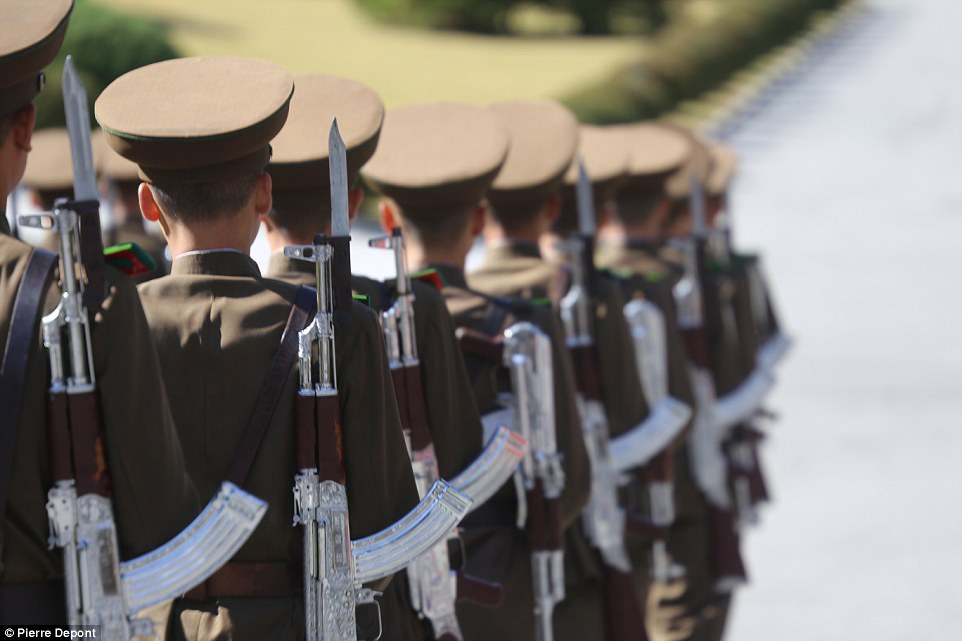 Men of the North Korean military parade with AK-47 rifles slung over their shoulders. Much of the army’s hardware, including planes and tanks, is bought from Russia 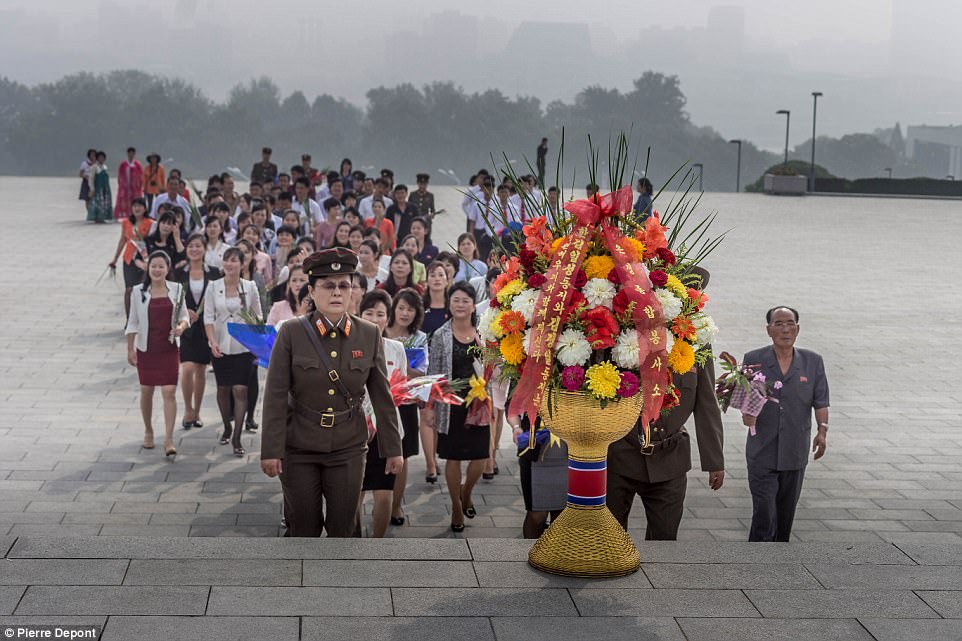 A wedding party makes its way across the main square in Pyongyang which is filled with two giant statues of Kim Il Sung and Kim Jong Il, and monuments to the country’s founding 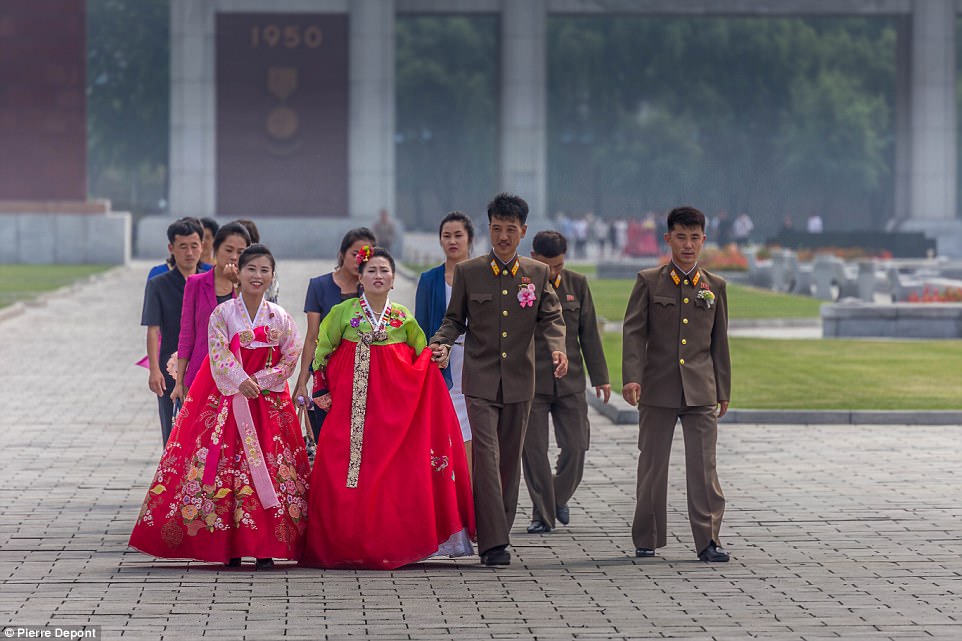 A soldier and his new bride walk through the centre of Pyongyang after tying the knot. The date on the wall in the background is a reminder of the last time the Korean Peninsula went to war 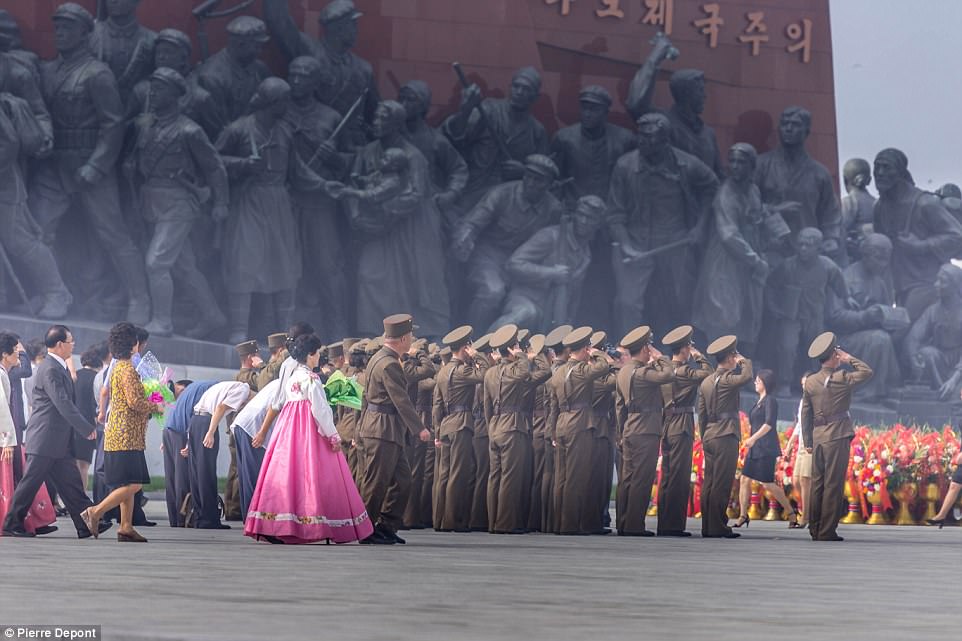 A wedding party is escorted by members of the country’s military in front a monument remembering the country’s Socilaist revolution. The figures depicted are of workers and soldiers

North Korea has one of the largest standing armies in the world, with more than a million soldiers believed to be on active duty and six million more in reserve, it ranks just behind America in terms of size.

Kim achieves this by conscripting most men and some women into the armed forces for 10 year terms, during which they will not only help to man outposts and guard the demilitarized zone with the South, but also run factories and provide manual labor in rural parts of the country.

However, what the North achieves in size it lacks in capability, with technology and vehicles dating back decades to when the military was first formed.

The majority of its tanks and planes are decommissioned Russian models, some of which date back to the Second World War, though China has also sold vehicles to the North. 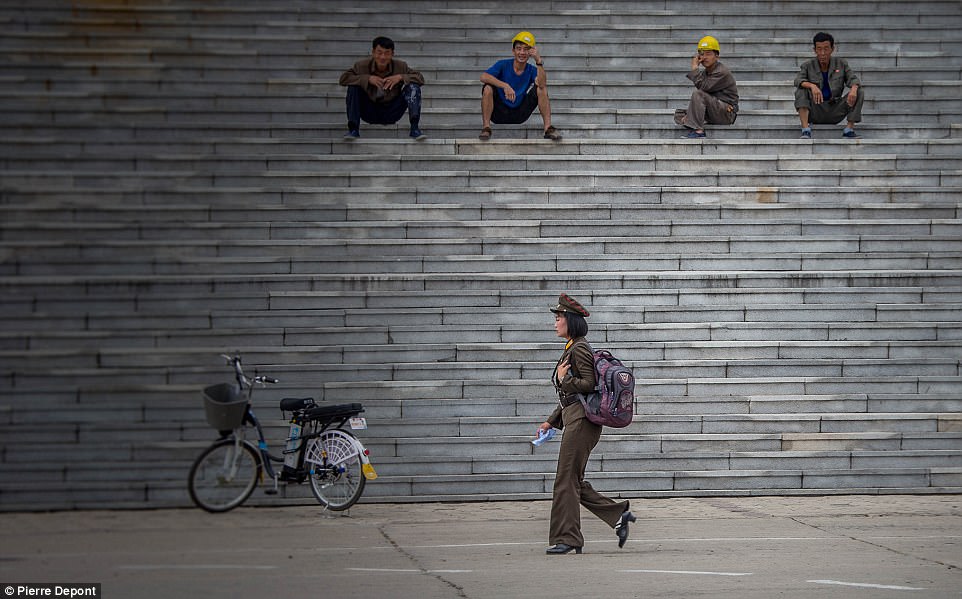 Construction workers gaze at a female member of the North Korea military as she makes her way to work through the main square in Pyongyang, where only those most loyal to the regime are allowed to live 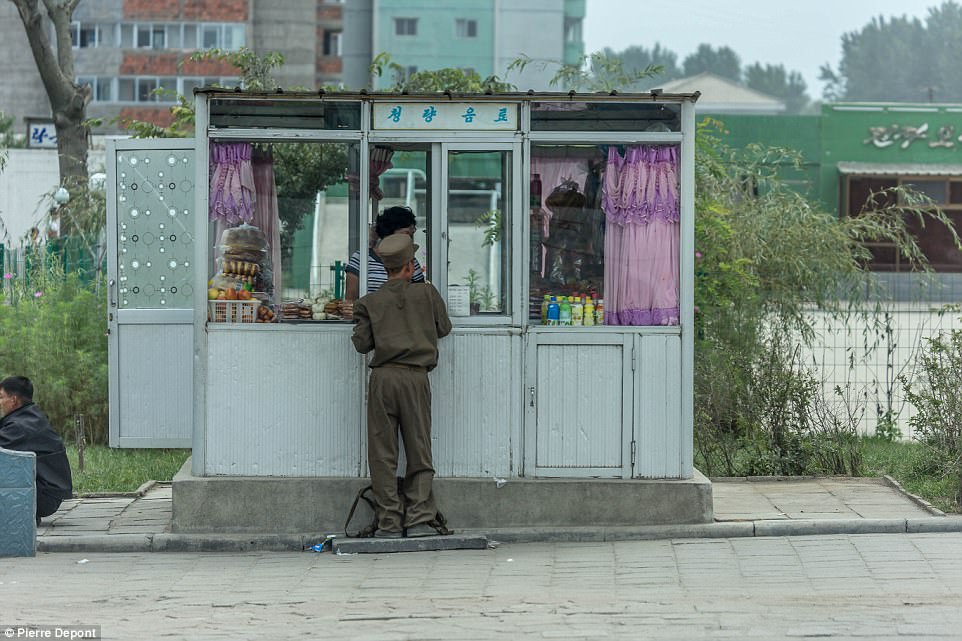 While life for many North Koreans, especially those in rural areas, can be tough – becoming a member of the military allows them to earn a modest salary and makes basics easier to afford 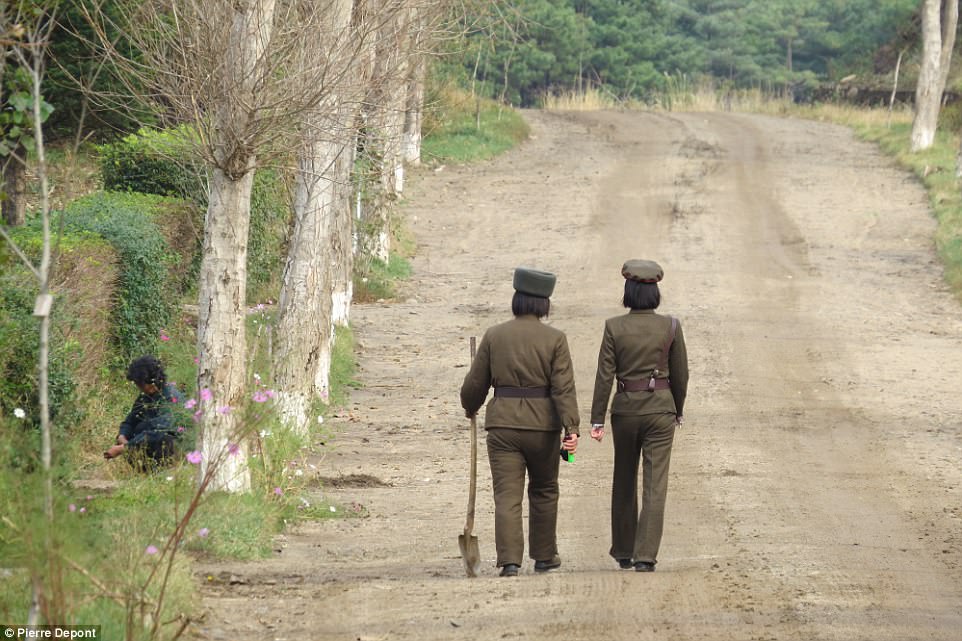 While members of the military will be called upon to protect the country from invaders, a large number are put to work providing much needed manual labour across the country 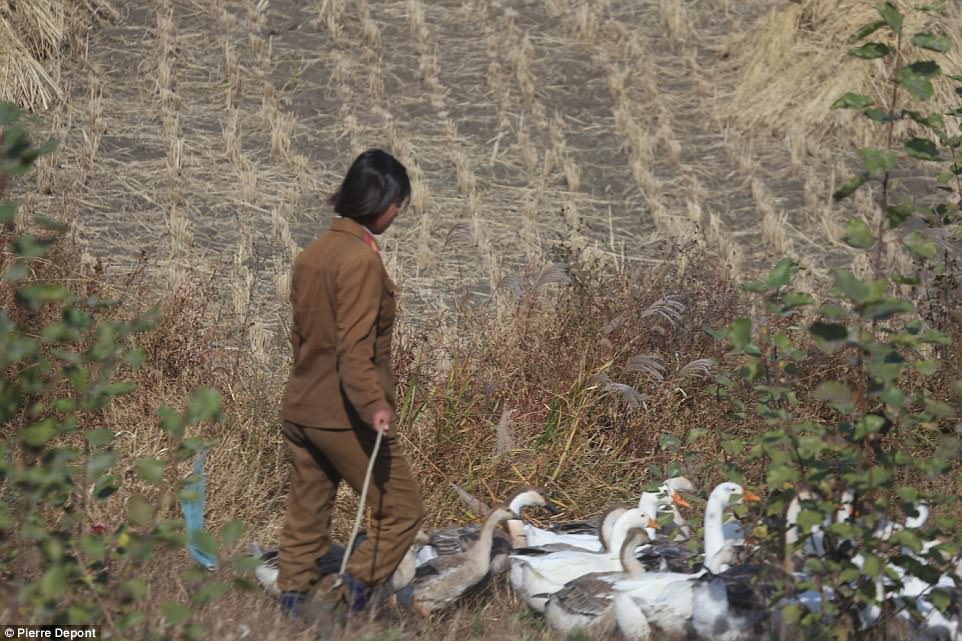 Farming, cutting wood, transporting goods and running factories are all jobs carried out be members of the armed forces 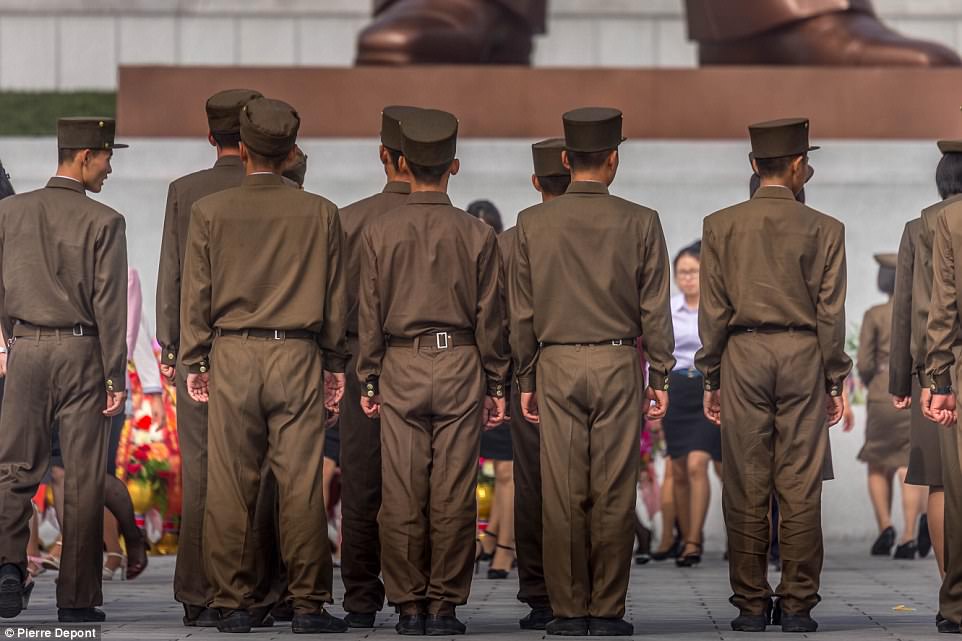 Young conscripts in the North Korean military parade in Pyongyang in front of a statue of the country’s founder, Kim Il Sung 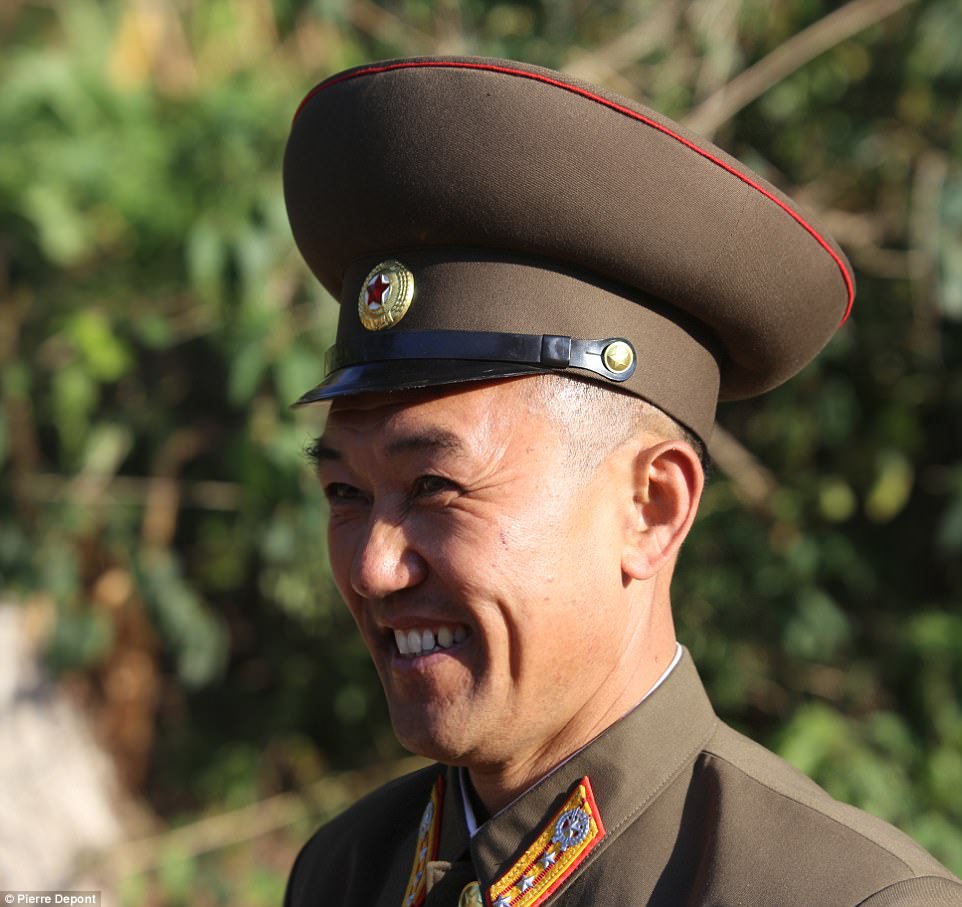 A soldier cracks a smile in an unusually candid portrait captured near the demilitarized zone, which marks the border between North and South Korea 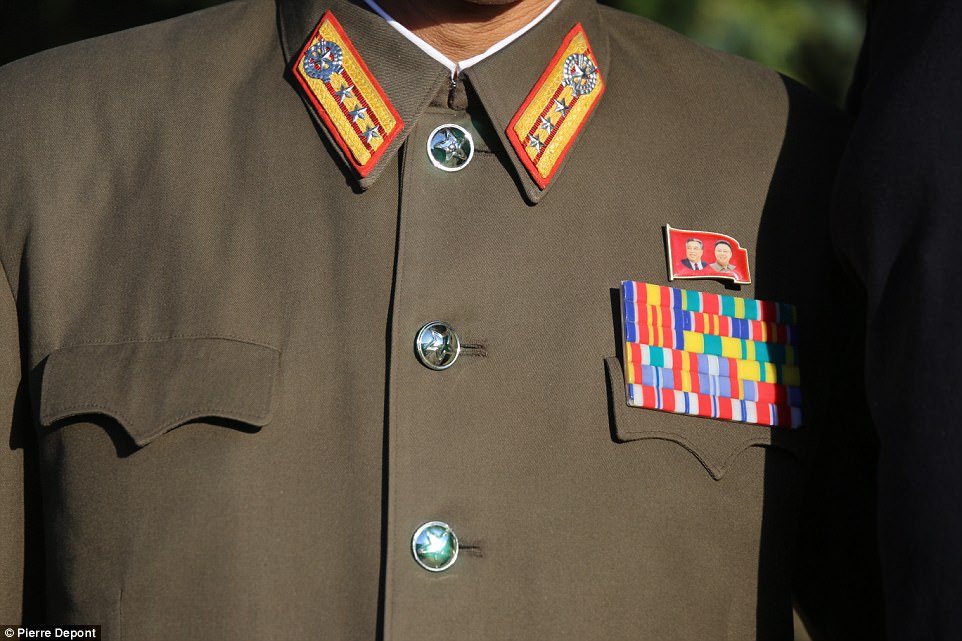 Soldiers stationed at the DMZ are more camera-friendly than elsewhere in the country, because of the number of visitors they get. Here, one soldier allows his service ribbons to be photographed 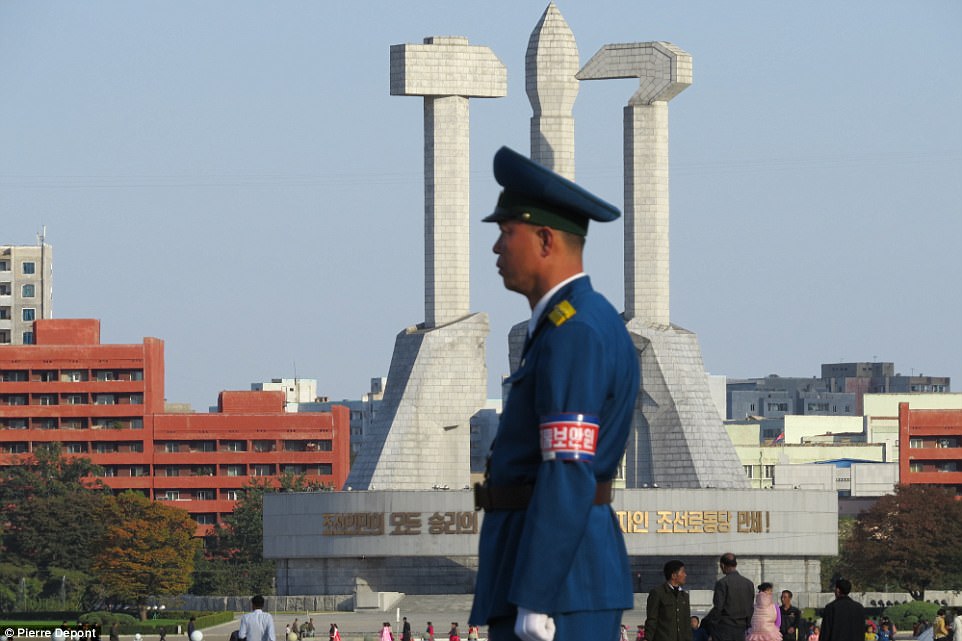 As well as providing manual labour, a large part of a soldier’s life will be spent on guard duty. Here, a member of the military stands to attention in front of the monument to the founding of the Worker’s Part of Korea 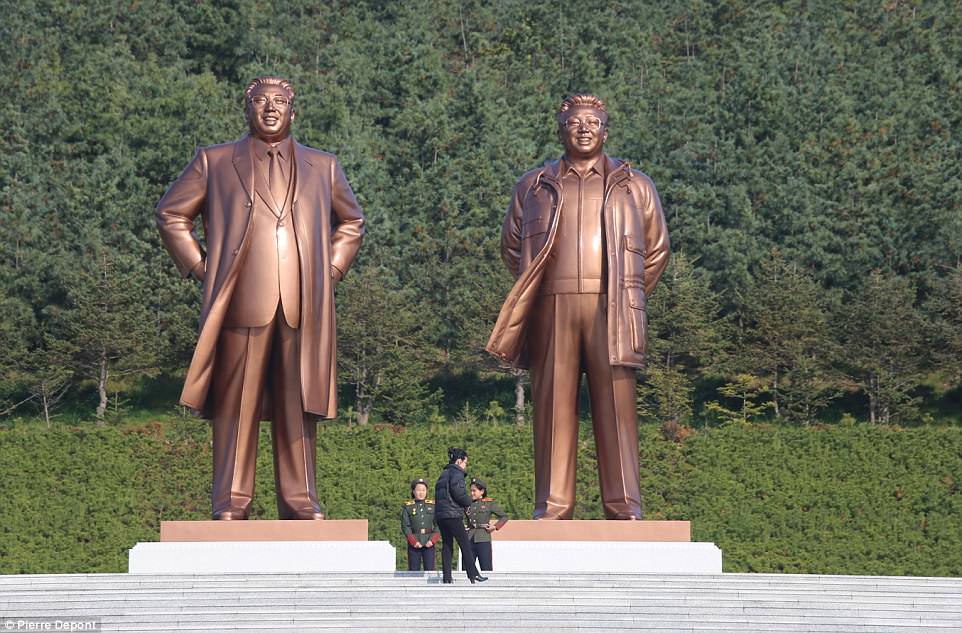 Huge bronze statues of Kim Il Sung, the founder of North Korea, and Kim Jong Il, his successor, dominate the main square in Pyongyang, where members of the military are often seen 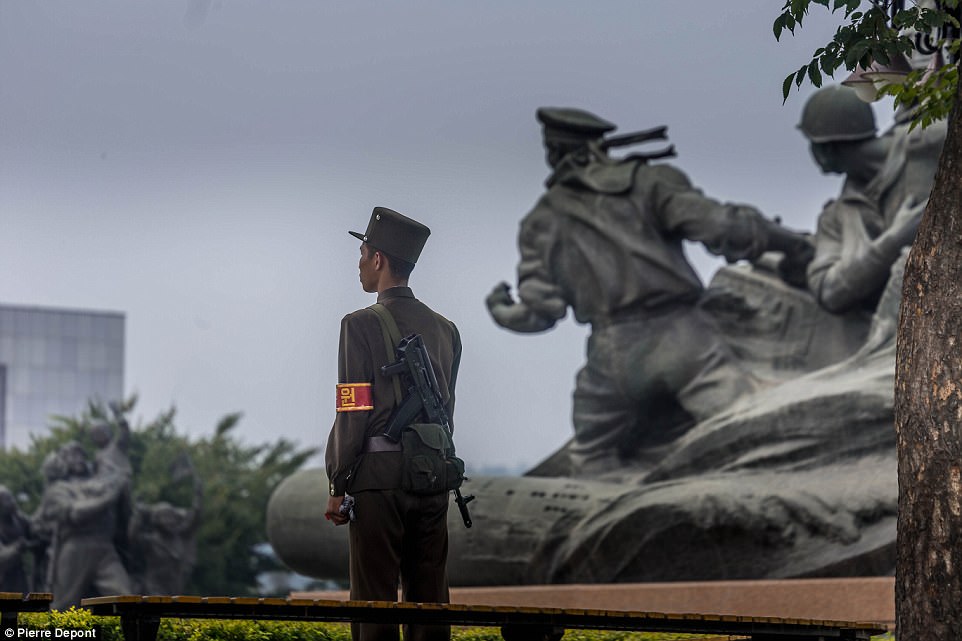 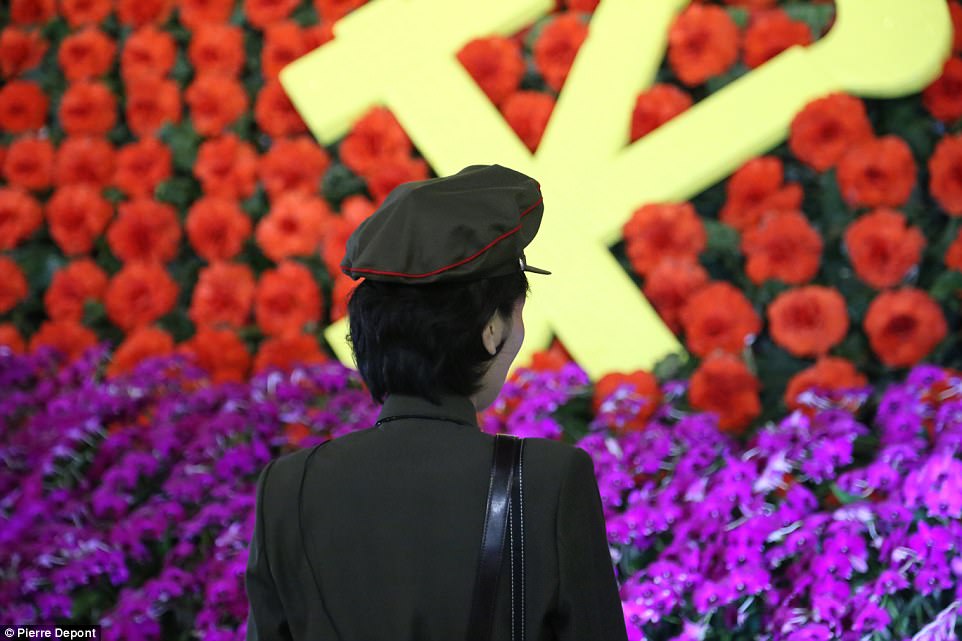 A female conscript examines a floral display in Pyongyang, complete with the symbol of the Worker’s Party of Korea, the country’s ruling – and only – political party 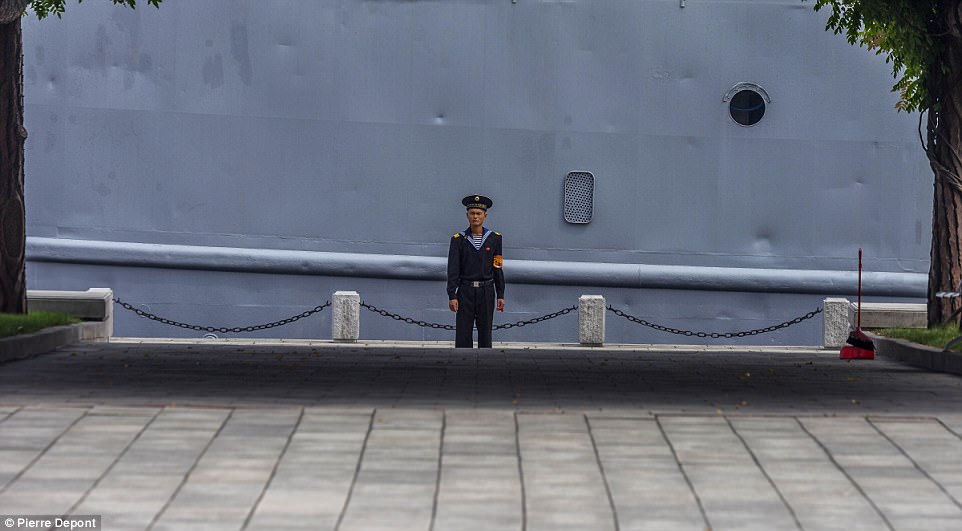 There are an estimated 11 frigates in the North Korean navy, one of which is pictured at anchor here in Pyongyang

The uniforms are also modeled after old Soviet outfits and are a common sight around the country, especially in parts that visitors are allowed to see because the North believes this reinforces their image as a powerful, war-ready nation.

Tensions on the Korean Peninsula have been running high following a series of provocative missile tests and a nuclear detonation carried out by Kim’s regime.

President Trump has threatened to ‘totally destroy’ the country in response, should the US or its allies be directly threatened, which promoted an unprecedented personal response from Kim who branded him a ‘mentally deranged dotard.’

While few experts believe either side is ready to engage in a war, warning that it would be the most bloody seen since the Second World War, there are fears that the inflated rhetoric of both sides could accidentally boil over into conflict.