Neighbours used a sledgehammer to try to smash their way into a burning house and save a family trapped inside, it has been revealed.

At least three people died in the blaze, which broke out this morning inside a detached bungalow in the rural Northern Irish village of Derrylin.

A 27-year-old man was arrested on suspicion of murder after he was detained at the scene and transferred to hospital for treatment.

Locals tried to smash a window but were unable to get in and save the English family as the property was consumed by the blaze, Sinn Fein MP Michelle Gildernew said.

Emergency services attend the scene of the house fire this morning in Derrylin, Co Fermanagh

She added: ‘As somebody who goes to a house in good faith to try and help people and people die, that is just, it’s horrendous. It’s hard to take.’

The whitewashed rural bungalow in Derrylin, near the border with Ireland, was destroyed in the blaze and the roof collapsed, leaving a shell surrounded by farm buildings and machinery.

The victims had only moved to the area recently, a local priest said, and were members of one family.

They had previously lived in the Republic of Ireland and were originally from England.

Fire engines and police cars were coming and going from the scene for most of the day.

Ms Gildernew added: ‘I know that some of the neighbours had went to the house here this morning to try and rescue the family inside. They are badly shaken.

‘I understand they used a sledge and tried to break a window to gain access but weren’t able to do that.’

Police Service of Northern Ireland (PSNI) Detective Superintendent Jason Murphy said: ‘At this time we believe the fire, which has claimed at least three lives, was started deliberately.

‘We are continuing to thoroughly examine the scene along with our colleagues in the Northern Ireland Fire and Rescue Service.’ 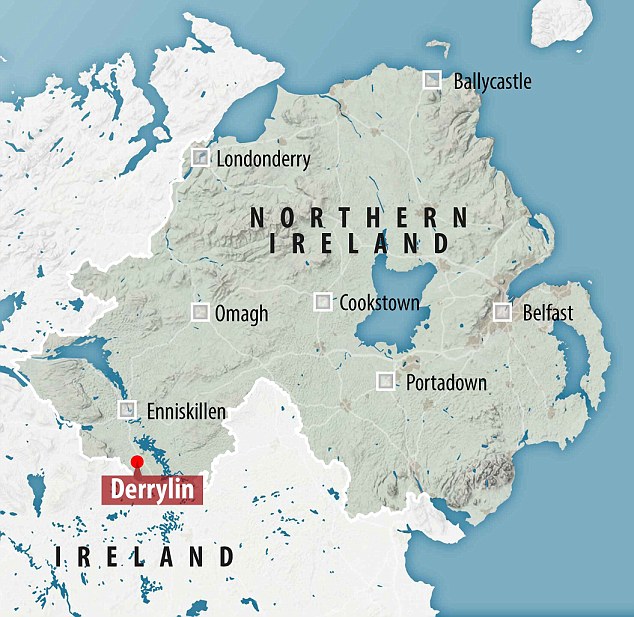 Northern Ireland Fire & Rescue Service (NIFRS) said officers took an emergency call about the fire at 7.14am on Tuesday.

The blaze occurred in a rural lane near the scenic Doon Road. It was ‘well-developed’ when firefighters arrived in three appliances from Lisnaskea and Enniskillen, the service added.

Police tape sealed off the entrance to Molly Road. It is the only house on the lane, surrounded by farm buildings and fields.

The fire was extinguished and police and fire officers are determining if anyone else was involved in the incident.

A spokeswoman for the fire service said: ‘The thoughts of NIFRS are with the family, friends and local community at this time.’

Mrs Foster added it was devastating news for the local community and there was widespread shock in the area.

‘It is important that the cause of the fire is established but my thoughts and prayers are with all those in the local area, friends and the wider family circle as they struggle to come to terms with this terrible tragedy.’