A miner who caught the highly-virulent Indian Delta strain of Covid from a co-worker in the Northern Territory before flying into Queensland has assured the community she ‘never mixed with anybody’ before testing positive.

The woman outed herself as the Delta carrier on the Sunshine Coast to give locals ‘peace of mind’ and explain she had always worn a mask while travelling in the lead up to testing positive.

Queensland will join New South Wales, the Northern Territory and Western Australia in lockdown as the highly-infectious Delta strain seeps into communities.

The woman travelled to Bli Bli from Dundee Forest, southwest of Darwin, where she is employed as a miner at the infected Granites gold mine.

Almost 800 miners are currently in lockdown and another 900 are isolating across Australia after an outbreak in the camp.

The woman claims she flew from the mine to Darwin on Friday June 25, and boarded a second flight directly to Brisbane.

The woman claims she had no symptoms and no reason to believe she might have contracted the virus until the next day, when she received a text from her employer informing her that a colleague had tested positive to Covid City of Darwin, City of Palmerston, Litchfield, Wagait Shire and Belyuen Shire, and Darwin Waterfront will all stay into lockdown until Friday at 1pm (Pictured: A woman getting a Covid test in Darwin) 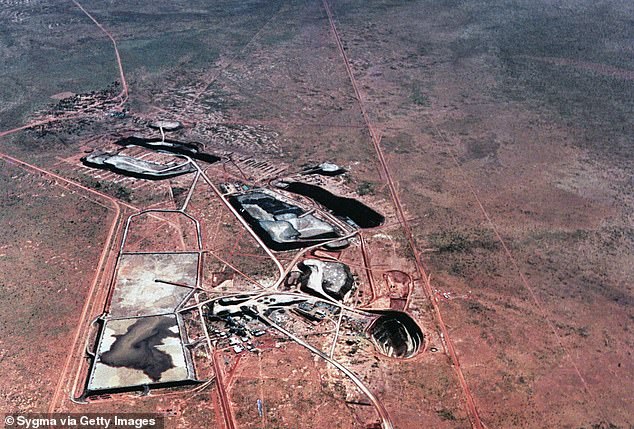 She claims that her normal residence is in the Dundee Forest in the Northern Territory, where she is employed as a miner at the Granites gold mine (pictured)

From there she caught a shuttle bus to Bli Bli – about an hour-and-a-half north of Brisbane on the Sunshine Coast while ‘wearing a face mask the whole time’.

The woman claims she had no symptoms and no reason to believe she might have contracted the virus until the next day, when she received a text from her employer informing her that a colleague had tested positive to Covid.

Up to 900 workers who had already flown out of the mine and scattered across Australia received a similar message.

‘All employees were told to get tested immediately and quarantine themselves,’ she told concerned locals in the Bli Bli Locals community group.

The woman alleged she was en route to Moura – five-hours north – when the text came, but turned around and returned to the Bli Bli address to quarantine. On Sunday June 27, the woman claims she drove herself directly to Nambour Hospital, still wearing a face mask, to present for testing.

She returned to self isolation and was contacted soon after to let her know that she had tested positive to the virus.

‘I waited until an ambulance collected me from the residence and transported me to the Sunshine Coast University Hospital, where I will be in isolating until a negative result is obtained after a minimum of 14 days,’ she said.

The woman then reiterated that ‘at no point’ did she mix within the community and said she would not be answering further questions relating to her diagnosis.

Queensland went into lockdown on Tuesday after confirming three new cases on Monday, with restrictions imposed for at least the next two weeks. Territorians in hotspots will also only be allowed to exercise for one hour a day with one other person they live with Pictured: NT officers checking on people in quarantine Queenslanders are on knife edge with the news that the Delta strain of Covid is now in the community. Pictured: People lining up for a vaccination in Brisbane

Premier Annastacia Palaszczuk said the next 24 to 48 hours are critical if health workers are to stop a surge in cases.

When asked at a press conference about the threshold for lockdown, Ms Palaszczuk said: ‘When we have unlinked community transmission.’

‘We are going to be looking at this day by day and we will not hesitate to take action, I’ll tell you that,’ she told reporters.

‘This a highly infectious strain and we need to get on top of this very, very quickly.’

The mask mandate will apply for the next two weeks. Masks do not need to be worn while driving a car or outside exercising.

Only 30 people can visit people in their homes and the one person per 4sqm restriction had also been reintroduced in public places.

People visiting restaurants and cafes must be seated, and must use Queensland’s check-in app on entry.

Meanwhile Darwin, Litchfield and Palmerston in the Northern Territory will remain in lockdown until Friday amid concerns the Indian Delta strain of Covid could have spread through the mine.

At least 1,500 miners have potentially been exposed to the virus – with 900 already catching interstate flights and another 750 in quarantine.

West Australian health authorities scrambled to isolate and start testing 252 contacts who flew into the state over the weekend. It is not known how many miners entered New South Wales, but one person linked to the outbreak in the NT tested positive in New England.

The mine’s ‘patient zero’ is believed to have been unknowingly infectious from June 18 until he tested positive.