One of the most recognised brands in Britain’s motorcycle history, Norton, has today unveiled its new global headquarters and state-of-the-art factory in the UK that will create 100 jobs.

The new facility is located in Solihull in the West Midlands includes its assembly plant, global design and research and development hub, customer showroom, service workshops and offices.

TVS Motor Company bought Norton for £16million in April 2020 after going into administration earlier that year.

He added: ‘We are creating the foundations for a sustainable long-term future for the Norton marque.

‘We are setting out to create a bold future for the company, our employees, our customers and our partners that lives up to the highest expectations, enabling Norton to once again become the real global force its legacy deserves.’

The purpose-built 75,000 square-foot facility, once fully operational, should have the capacity to produce around 8,000 bikes a year.

TVS looks set to put the same Norton models back into production before the company hit headlines for all the wrong reasons in 2020.

A range of new models are expected to follow as the company looks to repair its reputation and establish itself as a trustworthy name in the market.

‘The facility is home to design, engineering, purchasing, sales, marketing, and support departments, as well as the highly skilled production team overseeing the build of our new generation of motorcycles.

‘It is the perfect platform to re-energise our business as we lead the Norton brand to onward success where it will play a key role in the future of mobility.’ 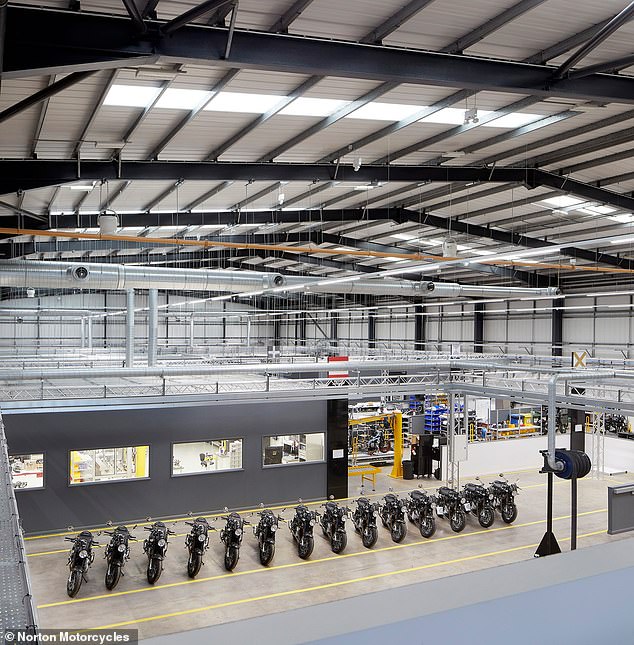 The purpose-built 75,000 square-foot facility, once fully operational, should have the capacity to produce around 8,000 bikes a year 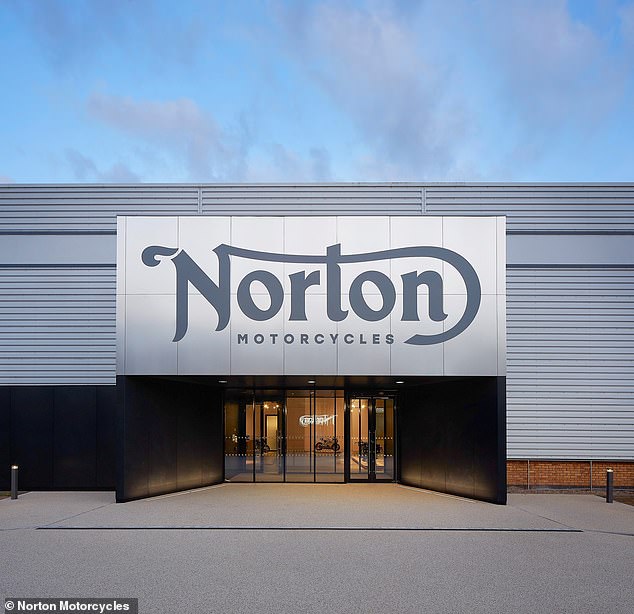 Norton was founded in Birmingham in 1898 and began building motorcycles in 1902.

In 1907, one of its bikes fitted with a Peugeot engine won the twin-cylinder class in the first Isle of Man TT event – the iconic road race that still takes place on the island today.

The company hit headlines when businessman Stuart Garner bought the group in 2008 and promised to bring it back to life.

The revitalised brand received high praise over the years from politicians – including former Chancellor of the Exchequer George Osborne – as well as millions of pounds in public funding.

However, it filed for administration in January 2020 over unpaid taxes.

Garner was ousted from the iconic British marque a month later as charges were sought on allegations of illegal handling of funds submitted by up to 227 members into pension pots.

The Pensions Ombudsman later ruled that Garner had ‘acted dishonestly and in breach of his duty’ in his role as a pension scheme trustee.

Garner appealed the ruling, but this was refused by the court and he was ordered to pay the £14million that was missing from the company’s employee retirement fund.