Norway’s Karsten Warholm warmed up for the Tokyo Olympics in perfect fashion when he broke the 400 metres hurdles world record at the Wanda Diamond League meeting in Oslo.

The 25-year-old two-time world champion beat American Kevin Young’s mark of 46.78 seconds, which had stood for 29 years, when he clocked 46.70secs at the Bislett Stadium on Thursday evening.

In a video interview posted on the Diamond League’s official Twitter account, Warholm said: ‘I knew that I had fast times in my body for a long time, but it’s one thing to know that you’re in good shape, it’s another thing to be able to go out and perform.

‘This was just a perfect moment. Everybody is talking about this world record, it has been standing for many, many years – it’s older than me, actually. The first time, Bislett, back with an audience, family and friends in the stadium…

‘I knew I had it in me, but of course it’s very special to be able to do it, and I’m just really happy and really proud. It’s an amazing moment.’

Young set his world record, which had been the longest-standing men’s mark on the track, at the Barcelona Olympics in 1992. 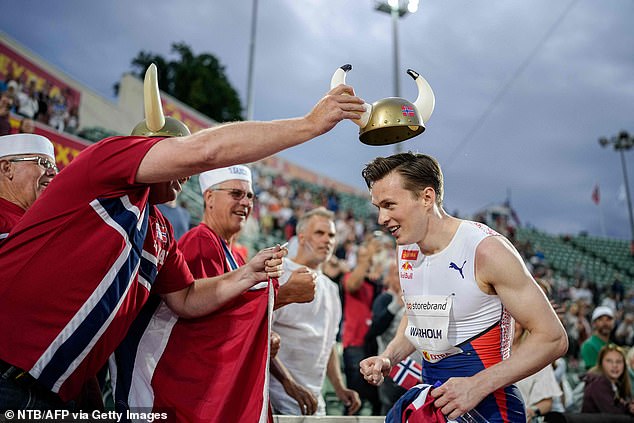