Norway’s PM poses for a selfie with her new team

Norwegian Prime Minister Erna Solberg on Friday announced the biggest shake-up of her Cabinet since she took office in 2013, replacing or repositioning two-thirds of ministers in the hope of reviving the Conservative-led coalition’s prospects.

Solberg lost her majority in parliament this week following the shock exit from government by the right-wing Progress Party over a decision to bring an ISIS bride home to Norway from Syria.

While Progress has said it will still back Solberg as prime minister, opinion polls point to an overwhelming lead for centre-left opposition parties ahead of a general election in 2021.

Solberg said the government would seek to cut the country’s carbon emissions, boost security and help modernise the economy.

But working with a minority could make day-to-day management more complex, she told a news conference, adding ‘deliberations in parliament will no longer have a foregone conclusion’.

The overall size of the Cabinet was cut by two jobs, and there will be a newcomer in 13 out of the 20 posts, either from inside or outside the current government lineup, including those of finance, oil and energy, justice and transport.

Veteran Conservative Party lawmaker Jan Tore Sanner is moving from the education ministry to become finance minister, in charge of fiscal policy and of overseeing the world’s largest sovereign wealth fund with $1.1 trillion in assets.

Tina Bru, 33, a rising star among the Conservatives, will take charge of the oil and energy portfolio, charting the course for western Europe’s largest petroleum industry at a time of rising concern over climate change. 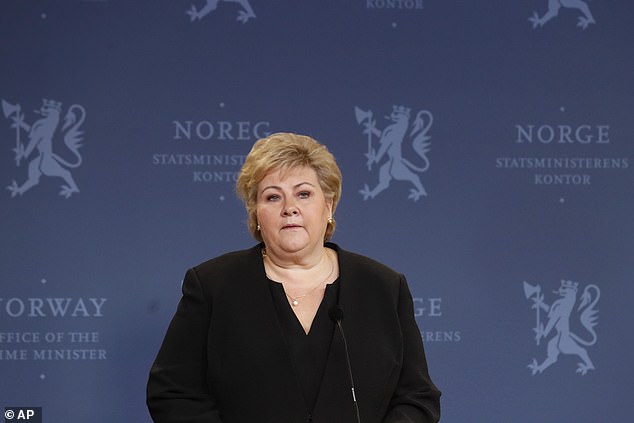 Solberg speaks during a press conference in Oslo on Friday. Norway’s prime minister on Friday presented her revamped center-right government, four days after the populist Progress Party pulled out of the coalition over the decision to repatriate an Islamic State group-linked woman from a detention camp in Syria

Bru said last November that Norwegian oil firms should speed up their work to replace gas turbines that power many offshore installations, replacing them with power from renewable sources.

Norwegian oil and gas platforms should thus stop emitting carbon dioxide, preferably by 2035, which could cut Norway’s overall emissions by a third, Bru told public broadcaster NRK at the time.

Emission cuts from platforms operated by Equinor and others cover only the carbon dioxide related to operations however, and not those that stem from the consumption of oil and gas when used by customers.

Analysts had expected Solberg to shake up her government later this year, but the sudden departure of Progress, including the party’s leader, Finance Minister Siv Jensen, led to the moves being brought forward.

Jensen’s exit followed Solberg’s decision, announced last week, to help a Norwegian woman and her two children return from Syria so that one of the children could receive medical treatment.

Progress had offered to help the children but opposed any assistance for the mother.

Decisions on whether to help women with ties to Islamic State return from Syria has caused controversy in Europe, including in Finland where the recently appointed government settled on a compromise to decide each case individually.

The woman, who has not been named, has denied being affiliated with the Islamist group, her lawyer has said. She remains in police custody at an Oslo hospital, and could eventually be separated from her children and transferred to prison while awaiting trial, police have said.