One of the world’s largest cruise line companies is to ditch plastic water bottles from its fleet and use paper cartons in a bid to protect the environment.

Norwegian Cruise Line will replace the five million single-use plastic bottles it gets through each year with a paper alternative by 2021.

The cartons, from Just Water, are made almost completely from paper with a sugar cane cap.

It comes just days after Greta Thunberg’s impassioned speech before the UN and consumers now demeaning their concerns for climate change be met.

Norwegian Cruise Line says it will not allow plastic bottles on its vessels from 2021 (pictured: the Norwegian Cruise Line’s Breakaway cruise ship enters Portland Port in Dorset in April 2018 – the longest and heaviest vessel to ever dock at Portland)

‘We’ve established a goal to eliminate single-use plastics across the fleet, which is a substantial undertaking,’ Andy Stuart, CEO of Norwegian told The New York Times.

‘The Just Water container goes as far as technology allows today in eliminating anything not renewable or recyclable in a container that will store water.’ He added.

The travel industry, in particular, is of great concern to tourists, with so-called flight-shaming now rife and an expectation on those who can afford to do so, to offset their carbon footprint. 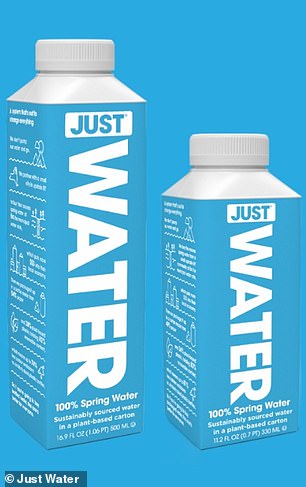 Prince Harry has even thrown his hat into the ring with his new Travalyst scheme, inspired by the words ‘travel’ and ‘catalyst,’ he hopes it can spark a change in the tourism industry.

The Duke of Sussex is not alone in wanting to see better options provided to consumers and public bodies are working to promote a change in the industry too.

The World Travel & Tourism Council, which represents airports, airlines, hotels and cruise companies across the world, announced yesterday at its New York Climate Summit an aim for climate neutrality by 2050.

The group is also working alongside the United Nations Framework Convention on Climate Change to address the problem.

Gloria Guevara, chief executive at the WTTC, told The New York Times of their plans to create a turtle logo to help consumers when choosing travel products.

She said that consumers were left ‘confused because there are so many certifications,’ such as the Rainforest Alliance or EarthCheck seals of approval.

But as the move towards sustainability grows, many will wonder if promises by companies like Norwegian Cruise Line are genuine or part of a public relations offensive.

In June, Princess Cruise Lines was fined $20million for environmental violations, including dumping plastic into the sea.

It had already been forced to pay $40million for deliberate pollution.