Norwegian may offer budget flights from Australia to UK

Flying from London to Australia is notoriously expensive, but that may be about to change if budget airline Norwegian gets its way.

The low-fare specialist confirmed that ‘the door is open’ for exploring ways of expanding to Australia.

However, it would need to do a deal with another carrier to succeed.

Flying from Australia to London is notoriously expensive, but that may be about to change if budget airline Norwegian gets its way

The potential move was reported by adelaidenow.com.au and a Norwegian spokesperson told MailOnline Travel: ‘As an ambitious airline with a huge aircraft order it’s no secret that we have plans to expand globally. We recently launched our first ever route from London to Singapore that offers passengers an affordable springboard to the wider Asia-Pacific.

‘Our Singapore-London flights continue to perform well and the door is open to exploring potential ways we can cooperate with other low-cost carriers that would offer passengers onward connections to other parts of Asia, and places as far as Australia.’

This week Norwegian launched the UK’s first low-fare route to South America, with a non-stop service from London Gatwick to Buenos Aires. 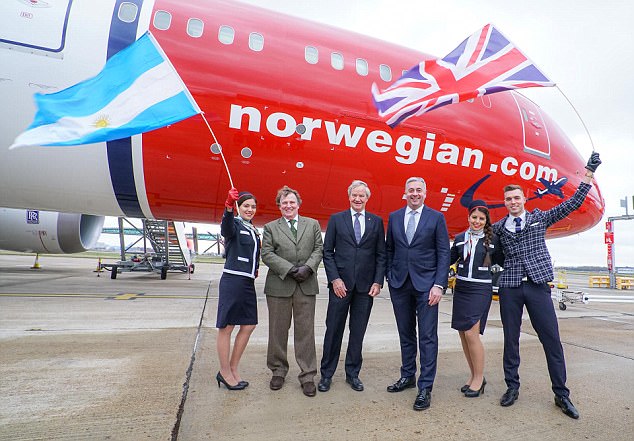 This week Norwegian launched the UK’s first low-fare route to South America, with a non-stop service from London Gatwick to Buenos Aires

Norwegian CEO Bjorn Kjos said: ‘We have marked the start of our new expansion into South America by bringing a taste of Argentina to London Gatwick.

‘I am delighted to bring our high quality long-haul flights to another continent as we launch the only direct flight from London Gatwick to Buenos Aires, giving leisure and business passengers affordable access to South America.

‘Our first flight to Buenos Aires from the UK marks another milestone for Norwegian. As our first South American route takes off, it is also a first step towards ambitious plans for international and domestic growth in Argentina, ahead of flights to Chicago and Austin from London Gatwick next month.’

In January the airline set the record for the fastest ever transatlantic flight in a subsonic passenger aircraft from New York to London after the journey was completed in just over five hours.

The Norwegian Boeing 787-9 Dreamliner was able to reach a top speed of 776mph as it hurtled across the Atlantic Ocean after being pushed on the 3,458-mile journey by an extra strong jet stream that at times reached 202mph.

This meant that the Norwegian DY7014 service from JFK to London Gatwick only took a total of five hours and 13 minutes, shaving 53 minutes off the expected flight duration.