From Frankfurt to the frankly awful. West Ham exited Europe and unleashed their anger on an underwhelming Norwich side that just want time called on this sorry season of theirs.

They were like 11 condemned men lined up in front of a firing squad, minus the blindfolds and cigarettes, and West Ham showed no mercy. David Moyes’s side hit them three times before the break – Jarrod Bowen setting up each strike – then added a fourth in the second half.

It made for an easy return to the Premier League in the end – just what the Hammers needed after that Europa League semi-final defeat by Eintracht Frankfurt on Thursday.

Manuel Lanzini completed the 4-0 rout, scoring from the penalty spot in the second half 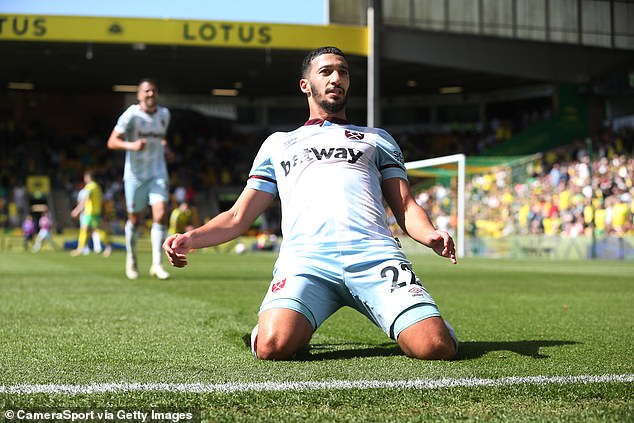 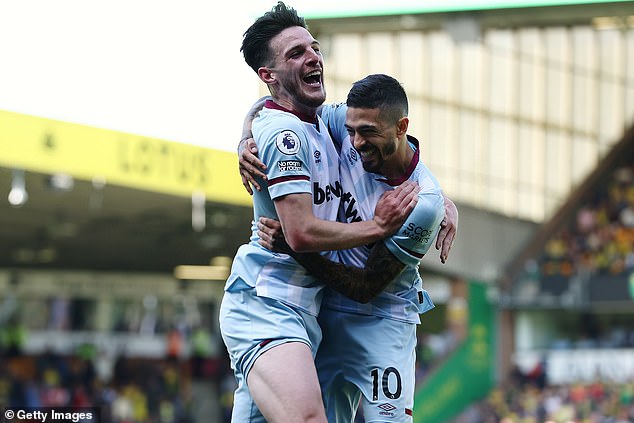 As gutting as that game was, West Ham’s supporters are looking forward, not backward. They sang about going on a Europa Conference League tour next season, but then that’s not what Moyes wants. He wants to snatch that Europa League spot from Manchester United.

It can happen. West Ham trail United by three points and have a game in hand on their rivals – the only snag being that it’s against Manchester City. Still, it’s a target.

Aaron Cresswell’s early red card in Frankfurt was correct and costly. He knows that, and so does his manager. Yet as Sportsmail reported on Saturday, Moyes started him here, throwing the 32-year-old straight back into the mix.

Cresswell had to front up sooner or later, and now was as good a time as any.

With relegation to the Championship already confirmed, the Carrow Road atmosphere was non-existent. The only noise came from West Ham’s support. They filled the silence with their songs, including a cheeky ‘let’s be ‘avin’ you’ chant on repeat.

It felt only a matter of time before West Ham made it 1-0 and they struck in the 12th minute. 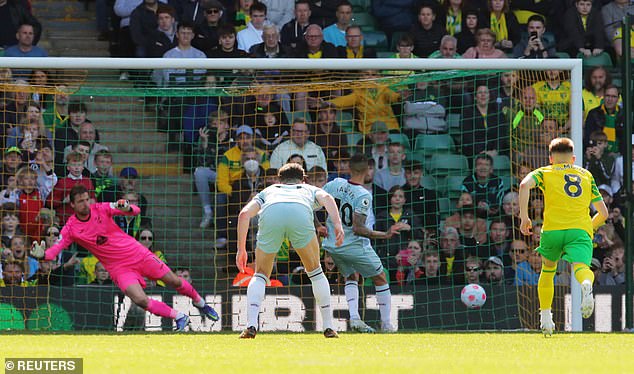 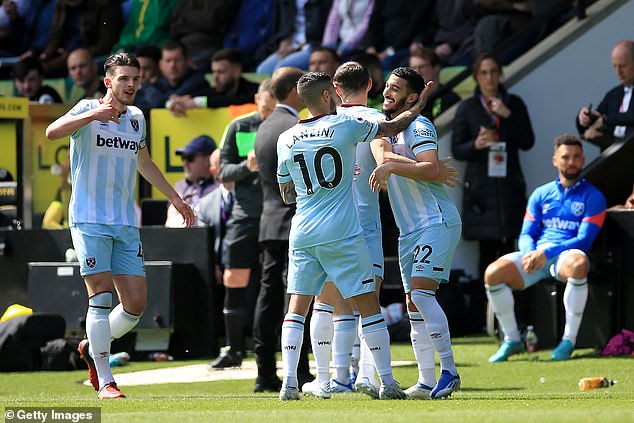 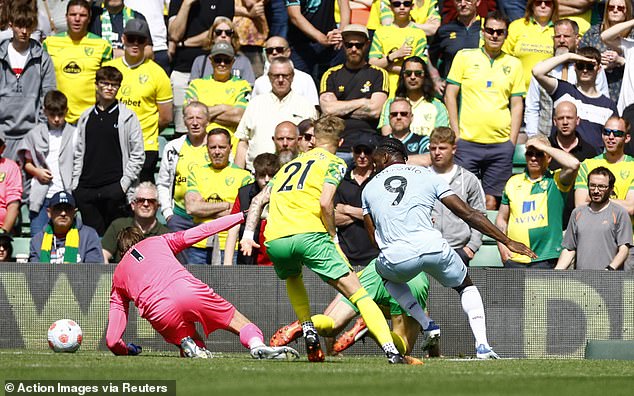 Bowen spread the ball wide to Said Benrahma, whose shot deflected off Max Aarons. It beat Tim Krul and Benrahma ran to the bench to hug birthday boy Mark Noble.

This match fell on Noble’s 35th birthday. With the club captain retiring at the end of this season, West Ham’s next fixture with Manchester City will be his final farewell at home.

The club are working on a grand goodbye at the London Stadium, although you hope they don’t go full-John Terry – the Chelsea captain who was infamously substituted after 26 minutes, marking his shirt number, to a guard of honour at Stamford Bridge. 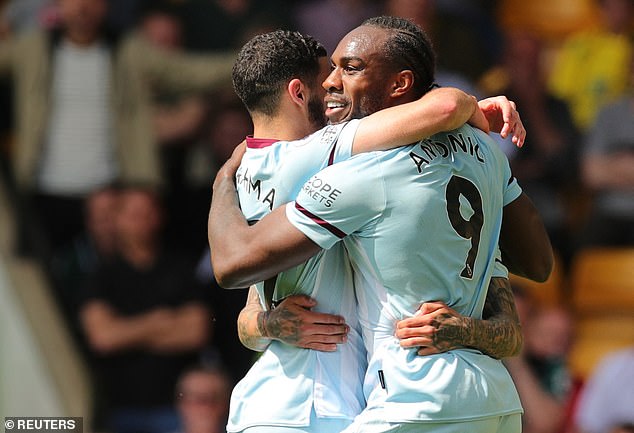 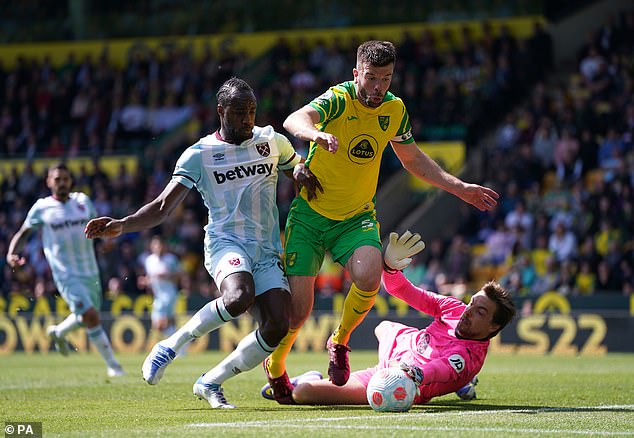 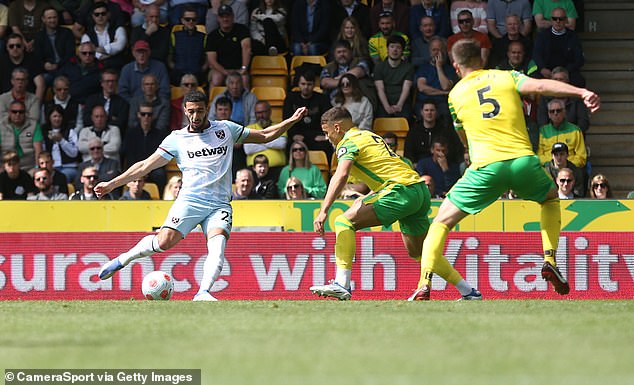 You imagine Moyes wouldn’t allow such a sideshow. Not when there’s a Europa League spot at stake. That’s what they’re now chasing and it was 2-0 to West Ham before the 30-minute mark when Bowen slipped through Michail Antonio. It looked like Krul had the ball but he flapped at it, gifting an open goal to Antonio.

Bowen should have scored when the ball fell kindly for him inside the six-yard box but it wasn’t his day in that regard. He was West Ham’s provider on this occasion, with it becoming 3-0 when he cut the ball back for Benrahma to blast the ball beyond Krul.

Norwich thought they’d got a goal back at the start of the second half when West Ham goalkeeper Lukasz Fabianski fumbled a cross. Sam Byram scored but VAR spotted him using his arm in the process. The goal rightly ruled out, it remained 3-0. 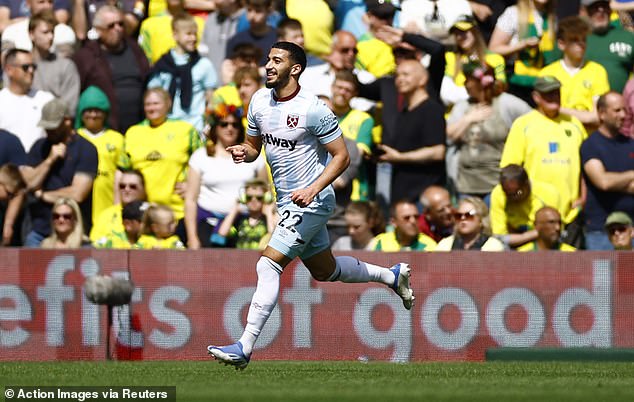 Only until West Ham were awarded a penalty after the hour mark, that is.

Craig Dawson had tried to meet a corner when Jacob Sorensen used his arm to stop his header from reaching the goal. Referee Robert Jones awarded the spot-kick via his pitch-side monitor and Manuel Lanzini made it 4-0, sending Krul the wrong way.

Noble was introduced for the final 25 minutes, sparking a rendition of ‘happy birthday’ from the away support. West Ham could have scored more than the four they did, but this did the trick.

They’re still in those European places in the Premier League, but Manchester United are in their sights.