Nostradamus predicted in 1555 that climate change would become so bad that the soaring temperatures would ‘half cook’ fish in the sea.

He also suggested that, eventually, the human race will not see rain for 40 years, and when it finally does, there will be ‘great floods’ that would devastate nations.

Nostradamus wrote: ‘Because of the solar heat on the sea/ Of Euboea the fishes half cooked/ the inhabitants will come to cut them/When the biscuit will fail Rhodes and Genoa.’

In another section of his book, Nostradamus also wrote: ‘For forty years the rainbow will not be seen/ For forty years it will be seen every day/ The dry earth will grow more parched/ and there will be great floods when it is seen.’

The UN has warned that the Earth is likely to warm by 1.5C within the next 20 years — a decade earlier than previously expected.

Nostradamus also appears to have predicted in 1555 that the Earth will be hit by an asteroid strike, causing mass death.

It is unclear from the astronomer’s predictions when this supposed strike of ‘celestial stone’ will occur, but he wrote that a ‘great fire’ would fall from the sky. 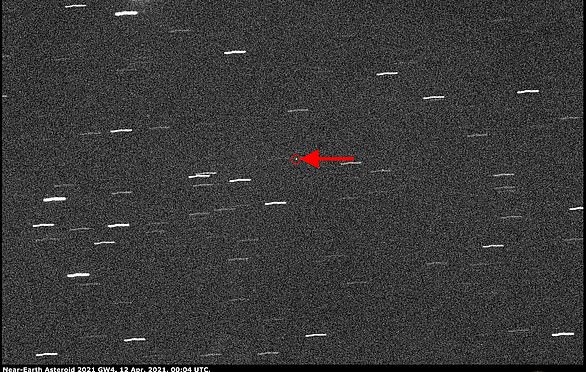 Astronomers from the Virtual Telescope project captured an image of the space rock when it was 180,000 miles from Earth. The arrow in the centre points to the object

He also wrote: ‘A great fire will fall from the sky for three nights/ The cause will appear both stupefying and marvellous/ shortly afterwards there will be an earthquake.’

Nostradamus appears to be suggesting that the Earth will be hit by scores of asteroids which will cause fires and devastation.

The world has already had close calls with asteroids, with an asteroid almost as long as a London bus narrowly missing Earth earlier this year.

The mass starvation will also see conflict rise, according to Nostradamus, as people fight over natural resources impacted by climate change.

In one section, Nostradamus wrote: ‘No abbots, monks, no novices to learn/ Honey shall cost far more than candle-wax/ So high the price of wheat that man is stirred/ His fellow man to eat in his despair.’

Nostradamus appears to be suggesting that the human race will never learn, and prices will continue to rise – so much so that many are left starving. 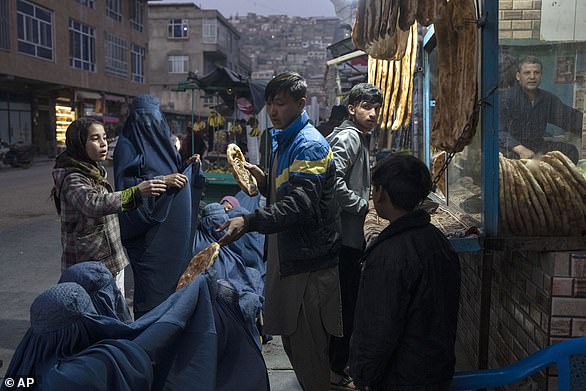 A man disributes bread to Afghan women outside a bakery in Kabul, Afghanistan, in December as prices soar in the country after the Taliban took over power

Across the world, countries have seen political instability, the coronavirus pandemic and shortages in supplies of gas cause an inflation boom, with prices rising for food and energy bills soaring.

Wholesale gas prices soared by 500 per cent in less than 12 months in the UK as a result of raised energy demand and low gas exports from Russia and low supply from France.

The power of AI technology

Nostradamus appears to have predicted the rise of artificial intelligence almost five decades ago.

Technology has evolved to such an extent over the last few decades that it is hard to know what developments will happen in the near future, but Nostradamus appeared to suggest that humans will become ‘immortal’ through the rise of AI technology.

He wrote: ‘The Moon in the full night over the high mountain/ The new sage with a lone brain sees it/ By his disciples invited to be immortal/ Eyes to the south/ Hands in bosoms, bodies in the fire.’ 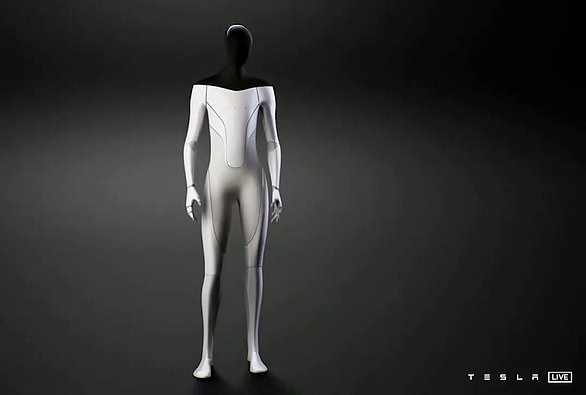 The author’s words could be interpreted as a nod to the rise of AI technology, where ‘immortal’ disciples could replace the humans on Earth.

The world has already seen Tesla CEO Elon Musk announce that the company will launch a humanoid robot next year, in a bid to replace humans in the workplace where the work is dangerous, repetitive or boring.