Not a very good boy: 40-year-old man is charged with misdemeanor after stealing a police dog’s ball

A North Carolina man who was fed up with police officers training their dogs was charged with a misdemeanor after he stole an official canine’s ball.

The Troy Police Department in Michigan was training a police dog named Eli on April 5 by laying scent tracks near a Holiday Inn Express hotel.

As officers prepared their training track, an unnamed 40-year-old man began to angrily yell at the officers from his hotel room window, asking what they were doing.

A happy pup: German Shepherd Eli successfully completed a scent training exercise, but the ball he was supposed to find was missing after an ‘upset’ 40-year-old man stole the toy

A K-9 Officer explained the training and warned the man from High Point, North Carolina not to touch the items left on the field including a toy ball, Troy Police said.

A police report described the man as an ‘upset tenant’ of the hotel.

The officer left the scene to start the canine track some distance away.

In the training the German Shepherd Eli successfully followed the scent, but when he arrived to the field, the ball he were searching for was no where to be found.

Officials then investigated and found the ball in the cup holder of a car owned by the man who yelled from his hotel window earlier in the day. 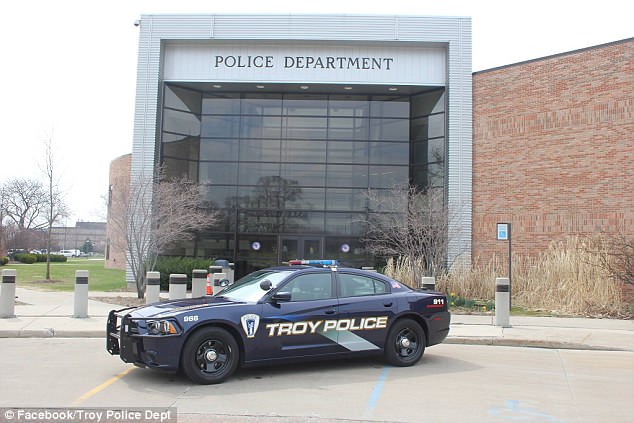 The man’s white Ford Econoline Van was found in the parking lot of the hotel and was impounded by police.

When the man came out to his car to inquire about what was going on, officers gave him a misdemeanor citation for larceny of police property.

The ball was then returned to Police Canine Eli.

Troy Police shared the bizarre citation on Facebook saying ‘Eli is happy that his ball has been recovered.’