The reactions to the 2015 Federal Budget on social media were significantly calmer than last year, with users exhibiting less anger than when the 2014 budget was handed down.

According to an analysis of user’s reactions carried out by the Black Dog Institute, people were less emotional than in 2014, where anger dominated the response.

Using the We Feel app Black Dog and the CSRIO tracked Twitter users’ reactions by searching for key words. 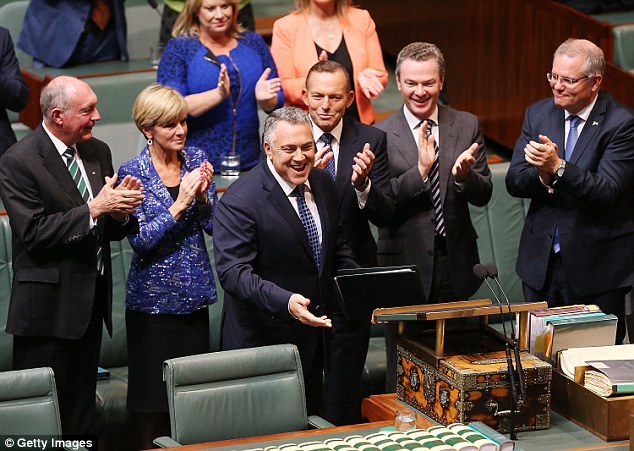 Hundreds of thousands of tweets were posted under the #budget2015 hashtag, with reactions ranging from outrage to relief.

‘Interestingly, we’re not seeing the same dramatic emotional response as last year #budget2015’, Black Dog wrote alongside its comparison of the 2014 and 2015 graphs mapping the responses.

Despite the more level-headed social media users, there was still a mixed response to many of the measures that were revealed on Tuesday night.

Some were relieved the Budget wasn’t as shocking as the one handed down in 2014 – which tried to introduce a Medicare co-payment and proposed a deregulation of university fees – while others were appalled with this year’s cuts to foreign aid.

‘Not as bad as last year but still a dud’, Ben Crawford wrote.

‘Never been so ashamed to be Australian. The cuts to welfare and foreign aid scream IPA’, Sharon McMahon posted.

Others were disappointed by the large cuts to foreign aid, which lost $1 billion

‘Would you believe that #Budget2015 has cut Humanitarian, Emergency and Refugee items…’ Shobaz Kandola tweted.

On Tuesday night Treasurer Joe Hockey announced that foreign aid had been cut by $1 billion to $4 billion, with Indonesia and Nepal bearing the brunt of it.

Others took aim at the lack of funding going towards education, domestic violence, the sum allocated to fighting terrorism and protecting our borders.

‘How can we be a moral country if we brutally cut foreign while hoarding billions in a childish infrastructure feud #auspol #budget2015’, JarrodGrainger-Brown wrote.

There were also many positive elements of the Budget pointed out by social media users, however some were still reluctant to give the government credit for them.

‘The few good aspects of #budget2015 are not due to the LNP, they are due to the crossbenchers. Credit where credit is due.’ Snowy posted.