An NHS report that claimed more than one in 18 pre-school children has a mental health disorder has been criticised for medicalising what is nothing more than bad behaviour.

Among two to four-year-olds, the most common mental health disorder is ‘oppositional defiant disorder ‘(ODD), according to figures released yesterday.

This is defined as children refusing to do what they are told and acting aggressively towards their parents. It is said to affect more than a quarter of pre-school children with supposed mental health problems.

But there are doubts about whether it is a real psychological illness, with one expert saying the NHS is ‘turning everything into a mental health problem’ and youngsters just ‘don’t do what they’re told’

Some 5.5 per cent of two to four-year-olds are thought to have mental health disorders, according to NHS figures released yesterday, with more than a quarter of these having ‘oppositional defiant disorder’, which is characterised only by bad behaviour (stock image)

‘We are turning everything into a mental health problem,’ Professor Julian Elliott, from the University of Durham, told The Telegraph.

‘For many of these children they don’t have a mental disorder; it’s a question of conduct.

‘The main problem with three and four-year-olds is that they don’t do what they’re told.’

Symptoms of ODD include arguing with adults, blaming others for their mistakes, deliberately upsetting people and having uncontrollable tantrums.

But experts argue toddlers’ parents would spend be constantly visiting doctors if they thought tantrums were a sign of mental illness.

And controversial treatments for the unruly toddlers include sending their parents on NHS-funded parenting courses.

But the experts who wrote the report have defended the classification, saying ODD can seriously affect a child’s health and education.

The National Institute of Health and Care Excellence, which advises the NHS, adopted the US-devised condition in 2013.

Exeter University’s Professor Tamsin Ford said: ‘It does affect these young people – their health is poor and their educational outcomes are poor.’

WHAT IS OPPOSITIONAL DEFIANT DISORDER?

Oppositional defiant disorder is a mental disorder recognised by the NHS which is characterised by ongoing bad behaviour and aggression.

According to The Priory private mental health clinics, which offers treatment for the disorder: ‘The signs and symptoms of ODD may be apparent in all children at some point during their development.

‘[But] if your child has been diagnosed with the condition, then these symptoms will be so frequent and severe to the point where their learning and social relationships are negatively impacted.’

The rehab centre says it can treat the disorder with behavioural therapy sessions, counselling and even medication.

Experts have also criticised the Government’s decision to bring in specialist mental health nurses in schools and colleges.

Sharon White, chief executive of the School and Public Health Nurses Association, said: ‘The suggestion that after only one year of training these practitioners would be able to provide the level of understanding deserved by our children and young people … is a nonsense sticking plaster.’

There were calls instead for more investment in the current school nursing system.

Yesterday’s landmark report on the mental health of children and young people in England is the first in more than a decade.

The findings were based on a survey of 9,117 children and included those aged two to four and 17 to 19 for the first time.

It shows a worsening picture for young people’s welfare, with one in eight five to 19-year-olds suffering a mental health disorder in 2017.

The rates of illness increase with age, affecting one in ten by the time they finished primary school, one in seven by 16 and one in six by age 20.

Women aged between 17 and 19 are the worst affected age group, with almost a quarter of them (22.4 per cent) suffering from an emotional disorder.

And one in three gay, lesbian or bisexual teenagers suffer from mental health problems, compared to one in seven heterosexuals.

Shockingly, a quarter of teenagers with a mental disorder have self-harmed or tried to kill themselves, and this rose to almost half of 17 to 19-year-olds.

The figures have coincided with concerns hundreds of children are being given high-strength antidepressants by doctors going against guidelines to prescribe them.

Experts called the figures ‘shocking’ and said inadequate mental health and support services leave many young people stuck in a ‘vicious circle of solitude and suffering’.

‘And while progress has been made to normalise conversations about mental health and successive governments have made additional funding for NHS services available, today’s figures are a wake-up call that this clearly hasn’t gone far enough.’

The Mental Health of Children and Young People in England report revealed the proportion of five to 15-year-olds with mental health problems rose from 9.7 per cent in 1999 to 11.2 per cent in 2017.

Experts offering their insight into the figures suggested social media could be partly to blame.

Teenagers aged between 17 and 19 have the highest rate of emotional disorders, with one in six of them suffering (16.9 per cent), and 6.4 per cent having more than one.

The YMCA’s Ms Hatton added: ‘To end this crisis that is ruining young lives, it’s crucial that action and investment goes into preventing young people from experiencing poor mental health in the first place.

‘From preventative youth and community services, to education in schools, mental health must be incorporated in every aspect of daily life to stop young people from reaching crisis point.

‘Without preventative services and with the NHS struggling to cope, too many young people are still left alone to deal with their mental health difficulties by themselves, leading to a vicious circle of solitude and suffering.’

WHERE DO THE MOST CHILDREN HAVE MENTAL DISORDERS?

NHS psychiatrist and deputy chair of the consultants’ committee, Dr Gary Wannan said: ‘These findings are extremely concerning yet not at all surprising given that the BMA has for a long time warned of the need for greater investment in child and adolescent mental health services (CAMHS) to be able to meet the rising demand.

‘Prevention where possible or early intervention is by far the most effective and beneficial means of treating children and young people’s mental health.’

It was also revealed yesterday that almost 600 children, including some aged 10 or under, are being given strong anti-depressants which raise their risk of suicide.

Figures unveiled by The Guardian showed 597 under-18s were given ‘last resort’ drugs by doctors going against NHS guidance.

The meds, paroxetine and venlafaxine, should not be given to children under normal prescribing circumstances, the paper reported, because they are believed to increase the risk of suicidal thoughts among young people.

Use of the super-strength depression drugs came as the number of under-18s taking anti-depressants rose from around 69,000 in 2016 to 71,365 last year.

Oxford University psychiatrist Andrea Cipriani told The Guardian: ‘Paroxetine and venlafaxine should not be prescribed as first-line treatment, that is for sure.’

She added: ‘Medications are not a quick fix for depression.’

Catherine Nixon felt she’d had a mental health problem from the age of seven but didn’t seek expert help until she was 16 years old when it began to take over her life.

She told the BBC’s Victoria Derbyshire programme she would get up at 7am and spend seven hours in the bathroom on her compulsive ‘morning routine’.

Not feeling like her condition was severe enough to seek help from the NHS, Miss Nixon waited for years before getting professional support. 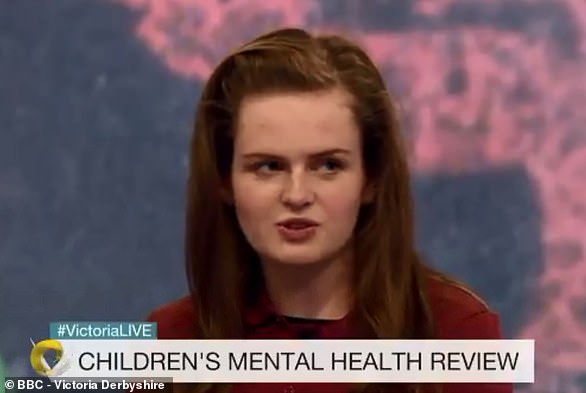 ‘It started to get worse during the first bit of year 12,’ she said.

‘I’d had counselling and low-level CBT but that wasn’t really cutting it and I didn’t really know where to go.

‘It wasn’t until things got to its absolute worst when I was in and out of A&E that I eventually got into [NHS Child and Adolescent Mental Health Service] and they were like “you’re a bit too severe for us, we’re going to have to send you to a psychiatric unit”, where I was for six months.’

Data breaking down rates by region revealed children in the East of England and the South West are worst affected, with nearly 16 per cent of them suffering.

Whereas those in London have the fewest mental disorders, with nine per cent of them suffering.

‘We need to support the children who are most vulnerable while making children and young people’s mental health a consistently high priority, and everyone’s business,’ said the Mental Health Foundation’s chief executive, Mark Rowland.

He added children in low-income homes or who have parents with mental health problems are at a heightened risk of suffering from disorders.

Alana Ryan, senior policy officer at the NSPCC said: ‘When a generation of children are struggling with their mental health with many having self-harmed or attempted suicide, we are fundamentally failing our young people.

‘Our own research shows even if children are referred for specialist mental health treatment there is a slim chance they will receive it, which is totally unacceptable.’

Chief executive, Sarb Bajwa, said the statistics confirm ‘what psychologists who work with this group have known for years – that the mental health challenges children and young people face are increasing.’

He added: ‘We need to prioritise prevention and early intervention and psychological approaches that are proven to work with children and their families, peers, schools and communities.’

For many people, mental health problems can start in the vital development stages of their lives, and this was the case for 18-year-old Alexandra Cromie, from Belfast.

Alexandra’s first years at school encouraged a negative outlook on herself, she says, when bullies would call her fat and even encourage her to cut and kill herself.

Not knowing how to deal with her feelings, Miss Cromie soon developed anxiety and depression aged 14. In attempts to change her appearance she became bulimic, trying to slim down to look more like her skinnier classmates.

With these efforts not working, and not finding anyone to confide in Alexandra’s troubled mental state soon resulted in more extreme actions. 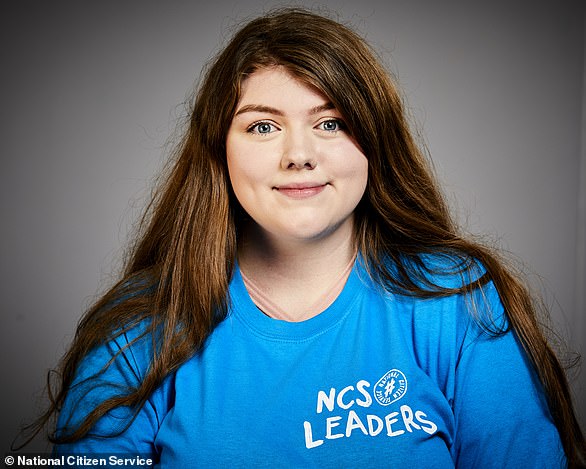 Alexandra Cromie’s mental health problems started when she was bullied at primary school and, by the age of 14, she developed anxiety, depression and bulimia and eventually tried to take her own life

‘There was nobody really there for me so all my hate and anger started to come out in self-harm,’ she revealed.

‘I was cutting myself, burning myself, scratching myself, picking under my skin, all because I didn’t know how to focus that negative energy elsewhere so I just started to focus doing that to myself which lasted around two to three years.’

Miss Cromie’s problem spiralled so much she eventually began experiencing suicidal thoughts and even tried to take her own life. It was at this point she confided in a doctor and was given an emergency referral to an NHS counsellor.

Starting to finally feel supported, Miss Cromie began to feel more optimistic about her future after a year of seeing an NHS counsellor.

She has now made huge improvements in her mental health and volunteers for the National Citizen Service, sharing her difficult experiences with other young people who have struggled, and encouraging people to seek help.

‘People need to realise that mental health can get better with the right support,’ Miss Cromie added. ‘But the problem is that people just don’t talk about it enough.

‘It can be really hard to open up, I’ve broken down previously when trying to share my story because I automatically thought people would think I’m a basket-case.

‘When I did share my story I gained so much support from people thanking me for opening up and saying how inspiring it was.

‘It really made me feel accepted. It just shows how beneficial it can be to have a supportive network around you, while being provided with a safe space to speak in.’