Not even the Flying Squad can stop this mass of migrants

Funniest story of the week featured two Sudanese illegal immigrants who stowed away in a charabanc full of ex-coppers.

They had apparently evaded a customs search at the Eurotunnel terminal at Calais and were only discovered when the coach pulled up at a Met Police sports and social club in Bushey, Hertfordshire.

It seems they gained access to the engine compartment when the bus was parked at Arras, in Northern France, and clung on for two days.

When the migrants crawled out into the daylight, they were immediately surrounded and it’s reported that one of the ex-cops shouted: ‘You’re nicked!’

Two Sudanese apparently illegal immigrants evaded a customs search at the Eurotunnel terminal at Calais and were only discovered when the coach pulled up at a Met Police sports and social club in Bushey, Hertfordshire (pictured)

As some of those on the trip to visit World War I battlefields were former members of the Flying Squad, I’d like to think he couldn’t resist yelling: ‘Put your trousers on, chummy, you’re bleedin’ nicked!’

The two illegals were detained, fed and watered, and taken to Hatfield police station. If this case runs true to form, they’ll have been packed off to the immigration centre at Croydon and given legal aid, a council flat and the full array of welfare benefits. One thing’s for sure, they won’t be sent back to the Sudan — or France, for that matter.

That would be a breach of their European yuman rites. So their hazardous journey will have been worth it, as far as they’re concerned. A home run.

If it was only a handful of illegal immigrants here and there, it wouldn’t be a huge problem. But the French authorities admitted this week that they are virtually powerless to stop the flood of foreign nationals heading for Britain.

Every single night, hundreds of young men — and, as this column has been pointing out for years, they are almost exclusively young men of military age — attempt to board trains and trucks in northern France bound for the UK. It’s only a matter of time before another Jungle-style transit camp is established.

Police in Calais say they stopped more than 57,000 last year, but who knows how many are getting through? Today’s Mail shows 15 more men found in a truck carrying dog biscuits on the M2 at Gillingham.

Barely a day passes without more photographs of migrants piling out of the back of lorries.

Few are genuine refugees. Most are economic migrants who have paid thousands to people-smugglers to transport them across continents. Some, though, may be Izal sleepers. We don’t have a clue who they are.

Admittedly, the authorities are trying to stem the tide. Yesterday, police and immigration officials raided addresses throughout the country as part of a co-ordinated operation against traffickers.

But as one back-door into Britain closes, others swing wide open. This regular flow of illegals is on top of those who continue to come here legitimately, despite successive governments promising to reduce the numbers drastically.

A report from the Office for National Statistics also said yesterday that the UK’s population will rise to an unsustainable 70 million in little over a decade and over half of that growth will be attributable to immigration. Even that, though, is reckoned to be a serious underestimate.

And only this month, David Wood, the Government’s former director general of immigration enforcement, told MPs that there are probably over a million foreigners here illegally already. 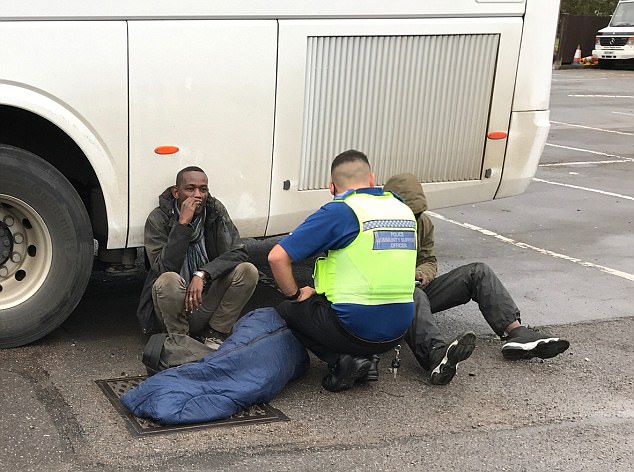 When the migrants crawled out into the daylight, they were immediately surrounded and it’s reported that one of the ex-cops shouted: ‘You’re nicked!’

Where are these additional newcomers supposed to live, especially as most of them will come to overcrowded southern England? All we ever hear is that we don’t have enough homes for our existing population and our public services, such as schools and hospitals, are in permanent crisis.

Yet die-hard Remainers — trying to thwart the will of the majority who voted to Leave the EU and take full control of our borders — think we should accept freedom of movement from Europe and clearly believe there is no limit to the numbers allowed to settle here.

If they get their way, there will be no need for migrants to conceal themselves in coaches and lorries, since they will all be able to enter Britain on EU passports, particularly those handed out like sweeties by Angela Merkel.

Why stow away when you can simply waltz in? This latest bizarre incident involving the Sudanese and the ex-cops has been likened to the fabulous Jolly Boys’ Outing episode of Only Fools And Horses.

Mange tout, Rodders. It reminds me more of another Only Fools special about a booze cruise to France which featured an Iranian national found in Denzil’s lorry when they returned to the lock-up in Peckham.

The Trotters took him back to their flat in Nelson Mandela House and introduced him to Raquel and Cassandra as ‘Gary’, a friend of Rodney’s from evening class.

No doubt these two intrepid Sudanese migrants, who were smuggled across the Med in a fishing boat, will end up living somewhere like Nelson Mandela House, too.

The only slight mystery is why they would choose to hide in the engine compartment, which isn’t the most comfortable berth. I may be able to offer an explanation.

Over the years, I’ve been privileged to be invited to deliver a couple of after-dinner turns at the annual bash of the Met’s Retired CID Officers’ Association.

A finer body of men and women you couldn’t hope to meet. But they do have a prodigious thirst.

My guess is that the luggage compartment on the return leg from Calais to Bushey will have been so full of cut-price supermarket booze there won’t have been any room for a small slice of Camembert, let alone two Sudanese stowaways.

Everybody back on the coach!

Keep your sticky fingers off freedom of speech 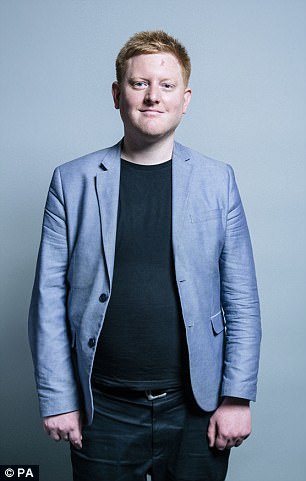 Genuine liberals — and, no, I don’t mean Left-wing fascists masquerading as liberals — should beware of joining the lynch mob stalking Labour MP Jared O’Mara, currently being put through the wringer over so-called ‘sexist, homophobic and racist’ comments.

Yes, I know about the sickening hypocrisy of the Left, always demanding the death penalty for Tories accused of making ‘inappropriate remarks’, yet trying to excuse O’Mara on the grounds that he is ‘on a journey’.

That’s beside the point. No one who believes in free speech — including the right to cause offence — should be seeking to destroy a man over something he said 15 years ago.

OK, so his remarks were crass and unpleasant, and in the normal course of events he’d probably be among the first to call for retribution against any Conservative MP who had said something similar.

But, frankly, I’m sick of the faux outrage of the self-obsessed Twitter mob, who label as ‘hate speech’ anything they disagree with.

These are dangerous times for liberty and freedom of expression. This is an age of medieval ducking-stool justice, where lives can be ruined by self-appointed social media warriors parading their own virtue by crucifying others.

The crusade against ‘sexual violence’ in the wake of the revolting Harvey Weinstein scandal is a case in point. Every dopey bird who has ever been on the end of a bungled fumble has reinvented herself as a victim of attempted rape.

Some obscure actress now claims she was ‘touched from behind’ by President George Bush Snr when he was 89 years old, wheelchair-bound and suffering from dementia. So why didn’t she say so at the time, three years ago?

Then again, there was no instant #MeToo back then. Everyone’s got to be in the movie today, haven’t they? Look at me, I’m a victim, too.

All this achieves is to debase genuine, serious sexual misconduct, which deserves to be punished. Looking at that picture in yesterday’s Mail of Keith Richards and Marianne Faithfull, I couldn’t help wondering how the Stones would have fared today.

Mick and Keef used and discarded hundreds of young women for their sexual gratification.

How long before one of these grizzled old Sixties groupies — although not, I suspect Marianne Faithfull — comes forward to report the Stones to the Jimmy Savile Squad? And don’t forget Bill Wyman and 14-year-old Mandy Smith.

We’re now told that ‘misogyny’ is about to become a criminal offence.

In which case, Under My Thumb is probably enough to get Jagger and Richards arrested in a dawn raid and put on trial at the Bailey for ‘hate crime’.

And unlike Savile, they’re both still alive.