Not to be sniffed at! How nose sprays can crack deadly peanut allergies

Not to be sniffed at! How nose sprays can crack deadly peanut allergies

A spray that is squirted up the nose could banish deadly peanut allergies.

It contains tiny traces of the proteins in peanuts that can trigger potentially fatal reactions.

By regularly exposing the body to the proteins in the spray over weeks or months, doctors believe they can help patients’ immune systems become tolerant to them, eventually eradicating the risk of life-threatening responses.

Gradual: By regularly exposing the body to the proteins in the spray over weeks or months, doctors believe they can help patients’ immune systems become tolerant to them

Although the treatment is effective, the protein content of nuts can vary considerably, making it difficult to precisely monitor patients’ intake and increasing the risk of a potentially life-threatening reaction if they consume too much.

Around one in 100 people in the UK has an allergy to peanuts. Most first allergic reactions occur before the age of two.

It happens when the immune system comes into contact with any one of three types of peanut protein — Ara h1, Ara h2 and Ara h3 — and mistakenly treats them as a threat. As a result, it releases chemicals to vanquish what it thinks is a dangerous invader.

It’s this rush of chemicals that triggers the symptoms of an allergic reaction, often within seconds. These range from an itchy mouth, nose or ears, to life-threatening anaphylactic shock — where the airway narrows, blood pressure plummets and organs shut down, causing death.

Allergy sufferers usually carry a device called an EpiPen to give themselves a shot of adrenaline if this happens. This opens up the airway and dilates blood vessels to force blood pressure back up. 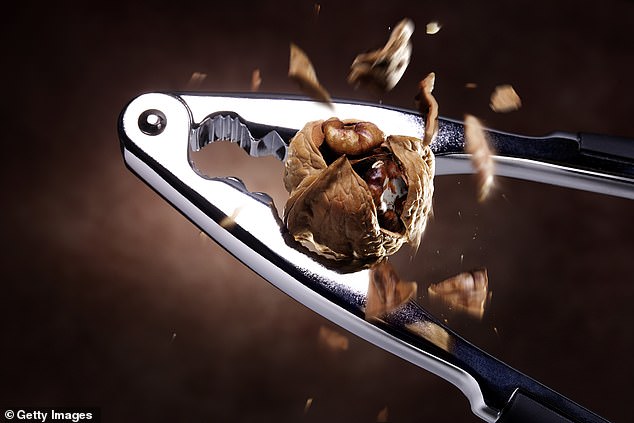 Common: Around one in 100 people in the UK has an allergy to peanuts. Most first allergic reactions occur before the age of two

Nasal sprays are a popular way of delivering drugs into the body, as the nasal cavity is lined with tiny blood vessels close to the surface that can quickly absorb medicines into the bloodstream.

Researchers behind the new peanut nose spray, from the University of Michigan, developed it from ultra-fine droplets of soya bean oil and water. They added minute traces of peanut protein.

In a study, they gave mice with peanut allergies either the nasal spray or a dummy spray without peanut protein three times over two months.

Two weeks after the final spray, all the mice were given peanuts to eat. Mice given the dummy spray developed allergic symptoms —such as itchiness, puffy eyes and wheezing — but those given the real thing had no symptoms, reports the Journal of Allergy and Clinical Immunology.

Further tests are under way to see if the effects are permanent. If successful, it will be tested in humans and may be available as a treatment in three to five years.

Dr Paul Turner, a scientist researching food allergies at Imperial College London, says: ‘It’s certainly plausible, and the nasal route may prove to be safer and easier than by mouth.

‘The danger is that we increase the risk of allergic reaction, making the allergy worse.’