Footy bad-boy John Hopoate has leapt to the defence of NRL star Addin Fonua-Blake after he was sidelined for calling a referee a ‘retard’.

The retired great claimed the Manly Sea Eagle’s player was being unfairly targeted and said he would have made similar comments if he had been in the same position.

Hopoate also slammed the media in a foul Instagram post on Thursday for what he labelled was a highly-publicised takedown on Fonua-Blake.

The former footy enforcer and now boxer’s stance is no surprise since he played 150 games for Manly and 31 for their joint venture Northern Eagles in a career in which he was suspended for 45 weeks due to a string of bad behaviour.

Hopoate, who was once suspended for 12 week for sticking his finger into the bums of opposition players during tackles, said he had no problems with Fonua-Blake’s comments.

‘All these IDIOTS carrying on about what he said, wake up cause you prob would of said worst’ he said, 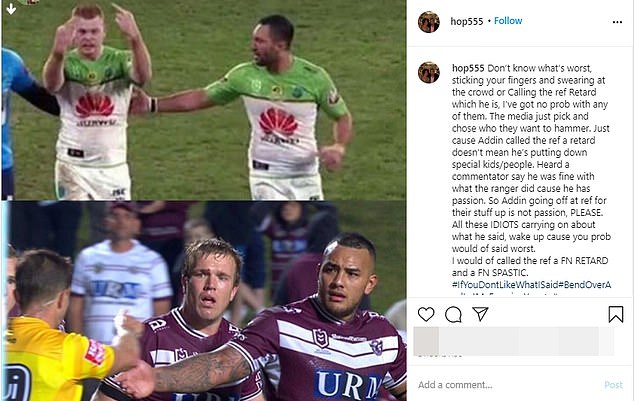 ‘I would of called the ref a FN RETARD and a FN SPASTIC.’

Hopoate also compared Fonua-Blake’s outburst to a separate incident a fortnight ago, when Canberra Raiders player Corey Horsburgh stuck his rude finger up at fans. 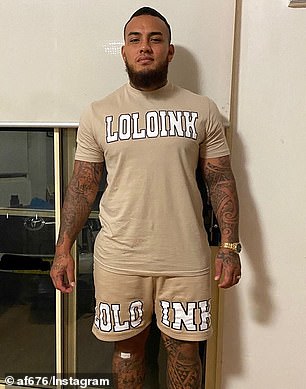 ‘I don’t know what’s worst (sic), sticking your fingers and swearing at the crowd or calling the ref Retard … I’ve got no prob with any of them,’ he said.

‘The media just pick and choose who they want to hammer.’

Addin Fonua-Blake has escaped with a two-game ban for his slurs against the referee, but will face further disciplinary action from the NRL board.

The Manly prop is being forced to sit down with the league’s interim CEO Andrew Abdo as part of an the code’s anti vilification policy.

He will be asked to explain why he chose to use the colourful language during the Zoom conference call on Thursday afternoon, reported the Daily Telegraph. 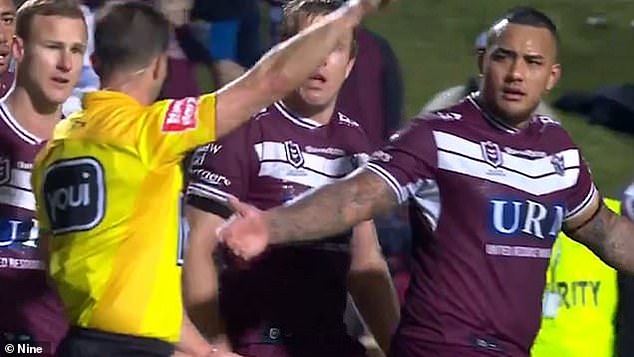 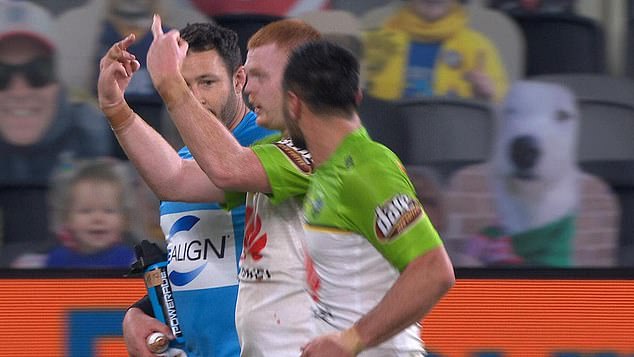 He also compared Fonua-Blake’s outburst to a separate incident a fortnight ago, when Canberra Raiders player Corey Horsburgh (pictured) stuck his rude finger up at fans

He will also be asked to volunteer and complete educational work with people with disabilities as part of his punishment over the comments.

The comments were made before he was marched from the field in Sunday’s loss to Newcastle following a controversial last-minute play.

While it was initially believed to be a a one-off comment a leaked report later revealed the true extent of his abuse .

2GB sourced a copy of the official report completed by Mr Atkins revealed Fonua-Blake also said ‘Are your eyes f***ing painted on you bunch of spastics’ when he passed the referee after the game. 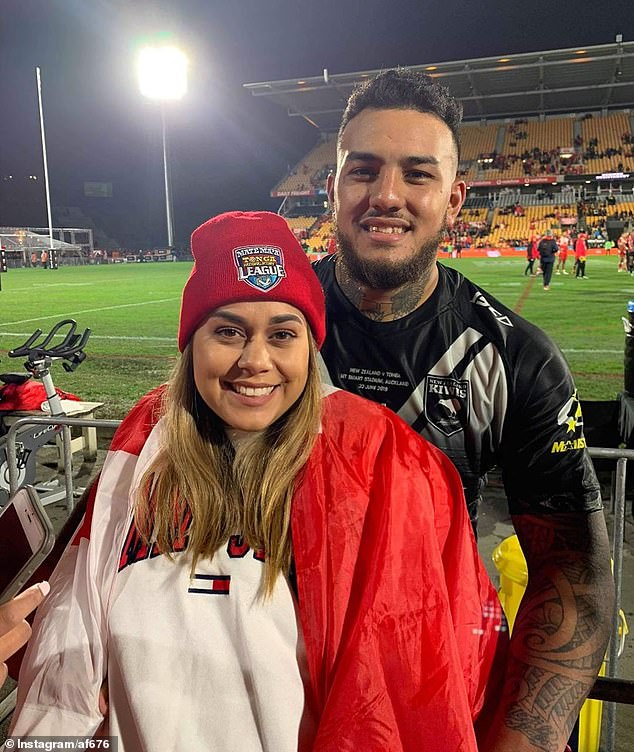 The Manly Sea Eagles released a statement and said Fonua-Blake was ‘remorseful’ and apologised to Mr Atkins.

‘Referees have a very tough job and we all need to respect their decisions even when we may not agree with them,’ Fonua-Blake said in the statement.

‘I should not have let my emotions get the better of me and I am very sorry for the comments I made.

‘I’d also like to offer my sincere apology to anyone offended by the regrettable language that I used. I let myself and my Club down. That is not who I am or what this Club stands for.’ 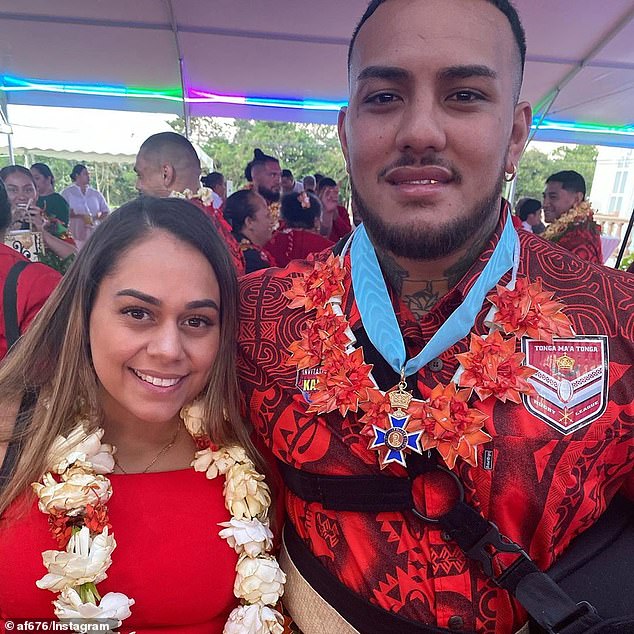 ‘As I’ve said many times, what these players have to understand is they are role models. They have a non-negotiable duty,’ Mr V’landys told the Sydney Morning Herald.

‘A young kid would’ve watched that and gone to school and abused a kid who is disadvantaged. To me, that’s intolerable.

‘We’re not going lightly on it. If we do, as a commission, we might as well walk away.’

Fonua-Blake will likely miss his return game against North Queensland as he refused a flu shot.

Players are not allowed in the state if they refuse to have a flu shot. 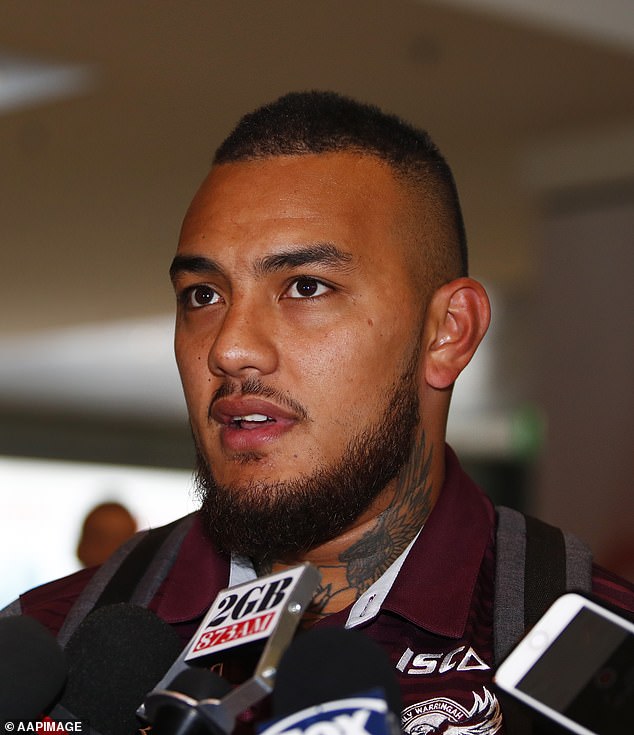