The Fighting Irish are fighting back after Notre Dame’s famed leprechaun mascot was voted one of the most ‘offensive’ in modern-day college sports.

The green-clad mascot, along with the school’s logo that includes a leprechaun in a fighting pose, was voted the fourth-most offensive mascot in the country, according to a survey conducted by Quality Logo Products Blog.

Officials from the university in South Bend, Indiana, which has won 13 college football championships, quickly fired back.

‘Our symbols stand as celebratory representations of a genuine Irish heritage at Notre Dame,’ the school said. ‘A heritage that we regard with respect, loyalty and affection.’

Notre Dame finished behind Florida State’s Osceola and Renegade, San Diego State’s Aztec Warrior and the University of Hawaii’s Vili the Warrior in the poll of 1,266 people.

‘None of these institutions were founded or named by Native Americans who sought to highlight their heritage by using names and symbols associated with their people,’ the school said.

The university also looked to distance itself from the recent wave of sports franchises which have folded to public pressure to change their names. In April, the Cleveland Indians announced the baseball team would be called the Guardians.

‘It is worth noting… that there is no comparison between Notre Dame’s nickname and mascot and the Indian and warrior names (and) mascots used by other institutions such as the NFL team formerly known as the Redskins.’

Notre Dame said its nickname and mascot emphasize the resilience of the Irish people.

‘In both the upraised fists of the leprechaun mascot and the use of the word ‘Fighting’, the intent is to recognize the determination of the Irish people and, symbolically, the university’s athletes,’ the school said. 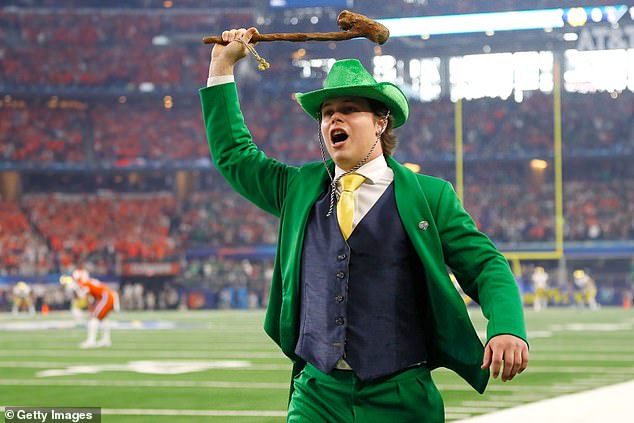 After Notre Dame’s Fighting Irish leprechaun was voted as the fourth-most offensive college football team mascot in the nation, a representative from Notre Dame emailed IndyStar with a written statement to defend its use and history

According to the Catholic university, the Fighting Irish nickname was initially created as a derogatory term, used by rival schools at the start of the 20th century, as most of their students were of Irish and Catholic descent.

The term was made the team’s official nickname in 1927 by then-university president Father Matthew Walsh, who was of Irish descent.

The Fighting Irish are one of the most successful college programs, not just in football, winning a total of 22 national titles in all sports. It last won the college football national championships in 1988 under coach by Lou Holtz.

Also, no college has more alumni in the Pro Football Hall of Fame than Notre Dame, which had 13 former players voted to Canton, according to the Hall of Fame website. 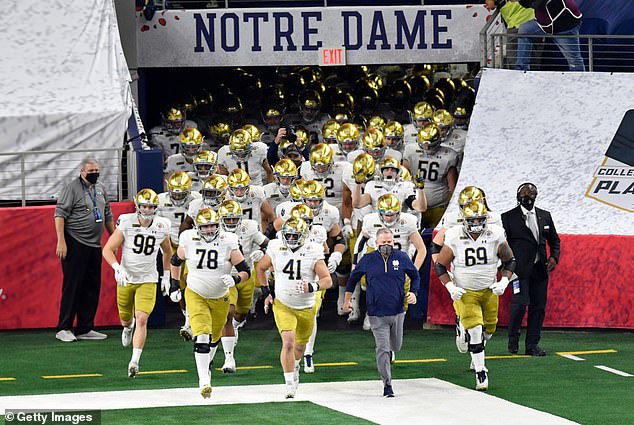 Notre Dame’s football team, also called ‘The Fighting Irish’ is one of the most successful programs in college football, not just historically, but recently too

In the NFL, the newly-named Washington Football Team changed its name from the Redskins and the Kansas City Chief’s retired its longtime on-field mascot, Warpaint the horse, over concerns about the use of Native American imagery.

They have also asked fans to perform the ‘Arrowhead Chop’ cheer with a closed fist instead of an open hand, according to The New York Times. 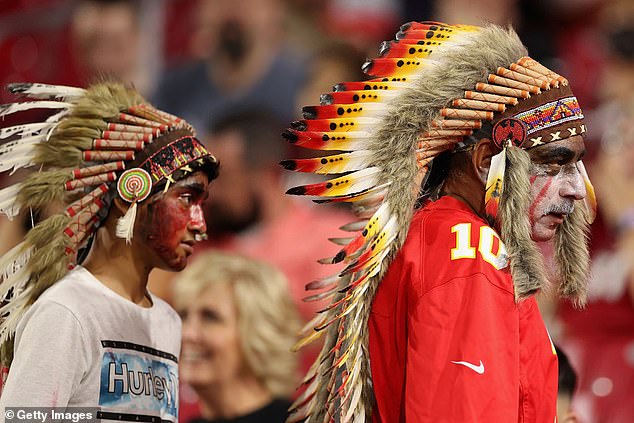 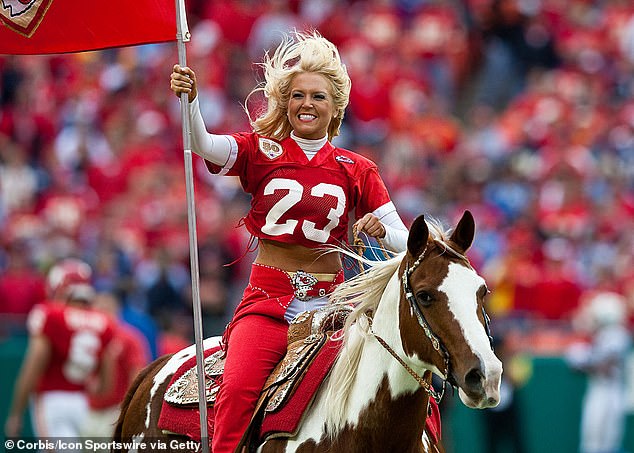 The Kansas City Chief’s decided to retire its longtime on-field mascot, Warpaint the horse (pictured), over concerns about the appropriation of Native American imagery 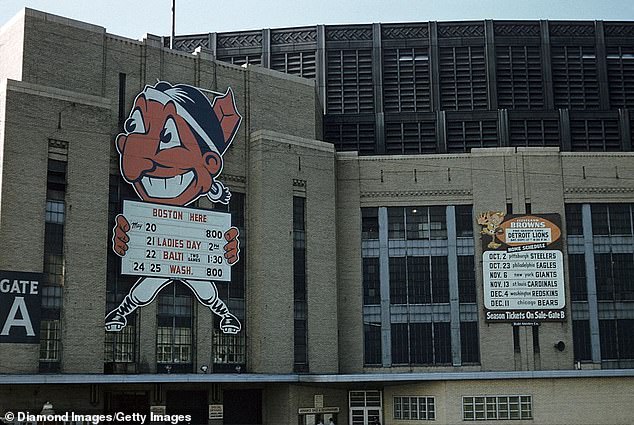 Pictured: Chief Wahoo, mascot of the Cleveland’s Indians prior to a game on May 20, 1960 between the Boston Red Sox and the Cleveland Indians in Cleveland, Ohio. The team will change their name to the Cleveland Guardians following the 2021 MLB season

Furthermore, politically correct and social activists groups are insisting the Chiefs’ name be changed, despite the franchise’s recent changes.

In baseball, the Cleveland Indians announced they will cease using the name ‘Indians’ following the 2021 baseball season, after which they will change their name to the Cleveland Guardians.

Quality Logo Products, a company that prints logos of sports team on all levels on T-shirts and water bottles, recently pushed out surveys asking people to find the best, worst, sexiest, creepiest, and most offensive mascots in college football.

The Illinois-based company managed to poll 1,266 people in total in and the surveys included 128 mascots from different Division 1 colleges and universities in the US.

Teams at both professional and collegiate level have come under intense scrutiny since the summer of 2020 regarding nicknames and mascots.

Top 5 mascots voted most offensive include a cowboy, and Indian and Hawaiian warriors in survey

Quality Logo Products launched a survey asking Americans for their opinion on college mascots without finding out which ones they find most offensive.

Here are the top five mascots that college football fans found the most offensive:

The Florida State University mascots appear at home games, riding into Doak Campbell Stadium with a burning spear before planting it into the ground.

While the school says the act serves as ‘a tribute to the great Seminole Tribe of Florida,’ many outsiders have taken issue with the act, often calling it racist.

However, it’s important to remember that the Seminole Tribe of Florida has endorsed the school’s use of the name and representation. 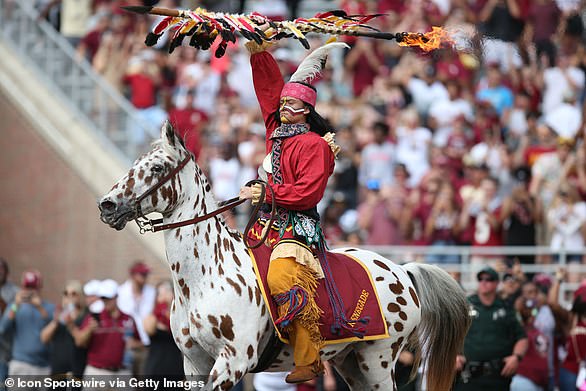 San Diego State University’s Aztec Warrior came in as the second-most offensive mascot in the nation.

The mascot and his uniform, which includes a conch shell, warrior shield, spear, loincloth, and headdress, has been called culturally insensitive.

However, he won’t be at the top of the list for much longer. In May of 2021, it was announced that while SDSU would retain the Aztec identity, but rather a spirit leader.

Further, it ‘will behave with dignity at all times and not partake in any behavior that misrepresents Aztec culture.’ 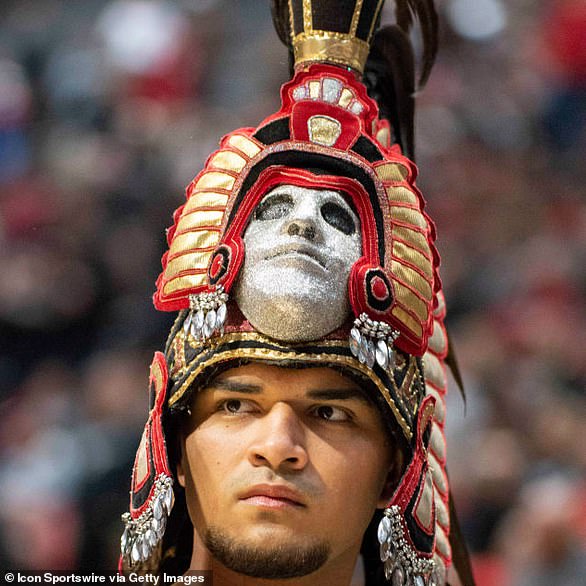 Pictured: Warrior mascot during the football game between the Nevada Wolf Pack and the San Diego State University Aztecs

#3 Vili the Warrior – University of Hawaii

Though he no longer appears at games, the iconic Vili the Warrior, from the University of Hawaii at Manoa, was deemed the third-most offensive mascot due to his sideline hakas and traditional warrior uniform. 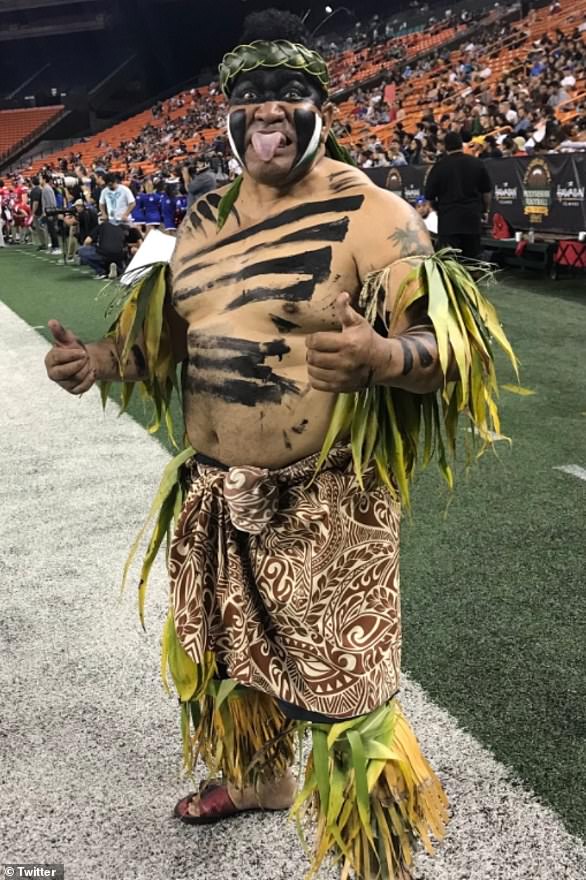 Vili the Warrior, from the University of Hawaii at Manoa, was votes as the third-most offensive mascot due to traditional warrior uniform and hakas on the touchline

The leprechaun is the latest sports mascot to draw public ire over claims of cultural appropriation although for different and unjustified reasons as it doesn’t depict Native American culture like its counterparts on this list.

The university also mentioned that the leprechaun originated in England as a disparaging symbol for Irish people.

The university’s ‘Fighting Irish’ nickname for its football team began as a derogatory term used by opposing schools at the turn of the century, as most of their students were Irish Catholic.

It was then adapted to be the team’s official nickname in 1927 by university president Father Matthew Walsh, who was of Irish descent. 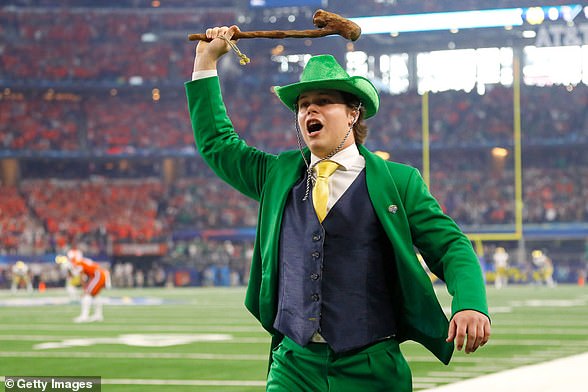 The survey found that not only was ‘Pistol Pete’ considered the ‘worst’ mascot, but also the third ‘creepiest’ behind the University of Louisiana at Lafayette mascot ‘Cayenne’ and another ‘Pete’ mascot from Purdue University.

‘With his massive head, blank stare, and disproportionately small body, it’s not hard to see why,’ the company’s post announcing the survey results read.

‘Pistol Pete’ was also deemed to be the fifth most offensive. 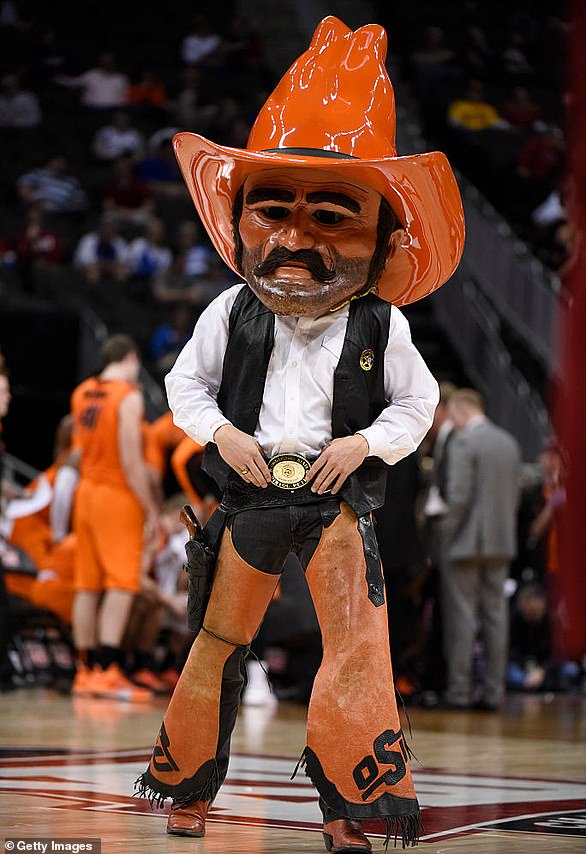 Pictured: Pistol Pete the Oklahoma State University’s mascot entertains in a game the crowd during a basketball game against rivals Oklahoma Sooners