Notting Hill Carnival has gotten off to a colourful start this morning, with hundreds of revellers throwing powder paint at each other as they danced through the streets and showed off their twerking moves.

One million people are expected to attend the event in west London over the course of Sunday and Monday, with temperatures expected to reach at least 30C on both days.

Thousands of officers will police the annual event and there will be ‘significantly more’ knife arches than last year, to deliver what the Metropolitan Police said they hoped would be a ‘safe and spectacular’ festival.

Although officers enjoying the party atmosphere has become a regular sight of the annual two-day event, this year police were facing a dance ban after being told to ‘remember what they are there for,’ reports the Telegraph.

Thousands of revellers will take to the streets of Notting Hill in west London today to enjoy the carnival celebrations. Some have already shown off their twerking skills at the annula two-day event 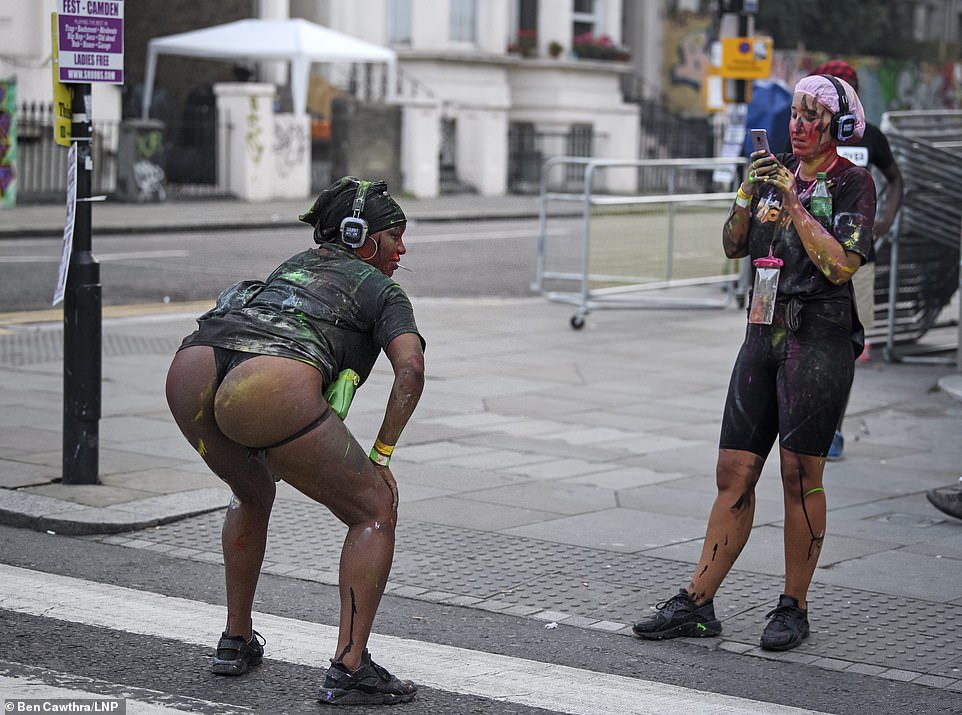 A woman shows off her moves while posing for a picture in west London today, the first day of Notting Hill Carnival 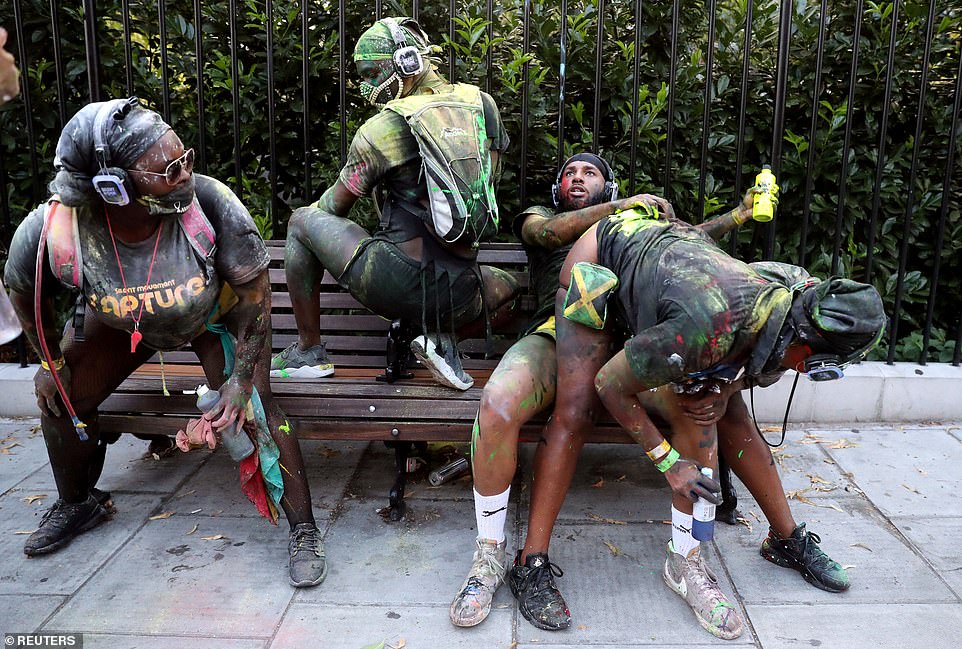 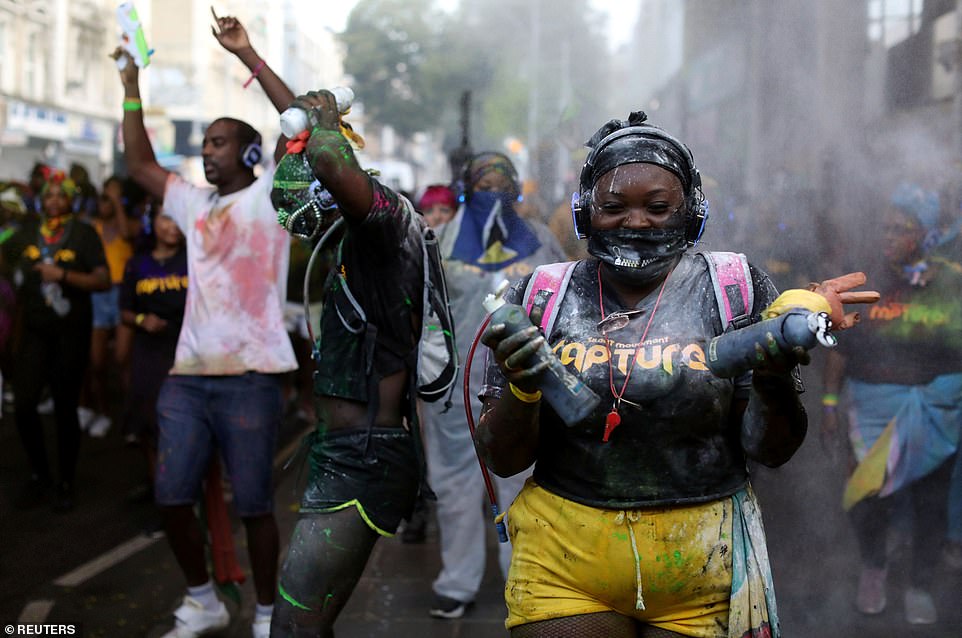 Superintendent Elisabeth Chapple said: ‘Our officers are there to keep people safe. If they are dancing and getting involved then they are less able to keep an eye on what’s going on.’

The number of police officers at this year’s carnival – 12,427, reflecting the number of shifts worked over the course of the weekend – is slightly down on last year.

Officers will be supported by about 900 event stewards on Sunday and approximately 1,100 on the typically busier Monday.

Ahead of the annual celebration, the Met’s Superintendent Elisabeth Chapple said: ‘We want to make sure that it’s safe and spectacular so we’re using a range of tactics including screening arches, using dogs, firearm teams and others.

‘We found last year that the use of screening arches alongside other tactics and other teams that were used were really, really effective and so the number of arches has been increased this year.’

She said the arches are a ‘fantastic deterrent’ and also help the detection of offensive weapons. 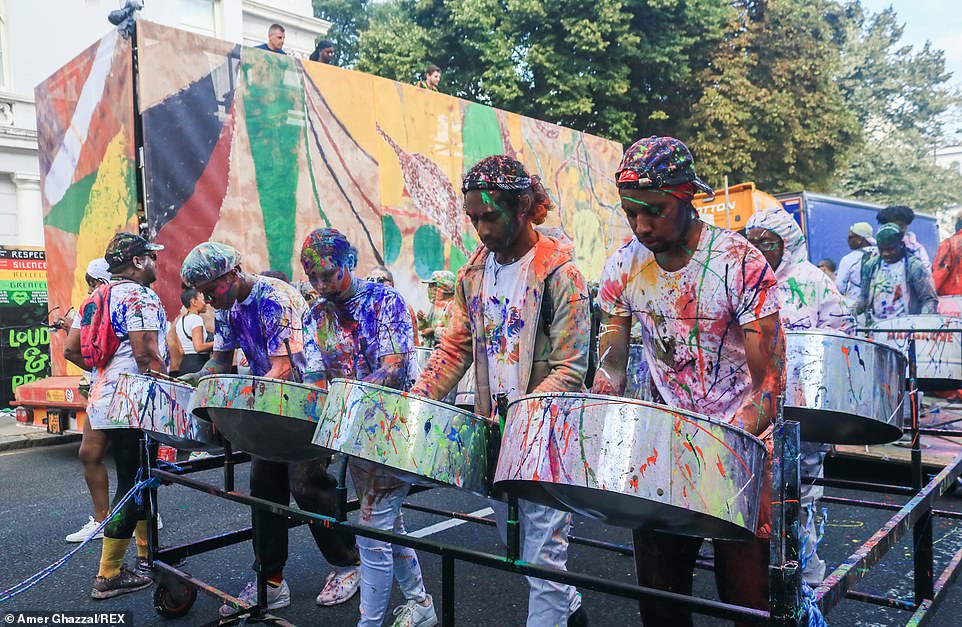 Revellers have taken to the streets of west London to kick of Notting Hill Carnival today. Pictured are performers playing the drums as they paraded through the area covered in colourful paint 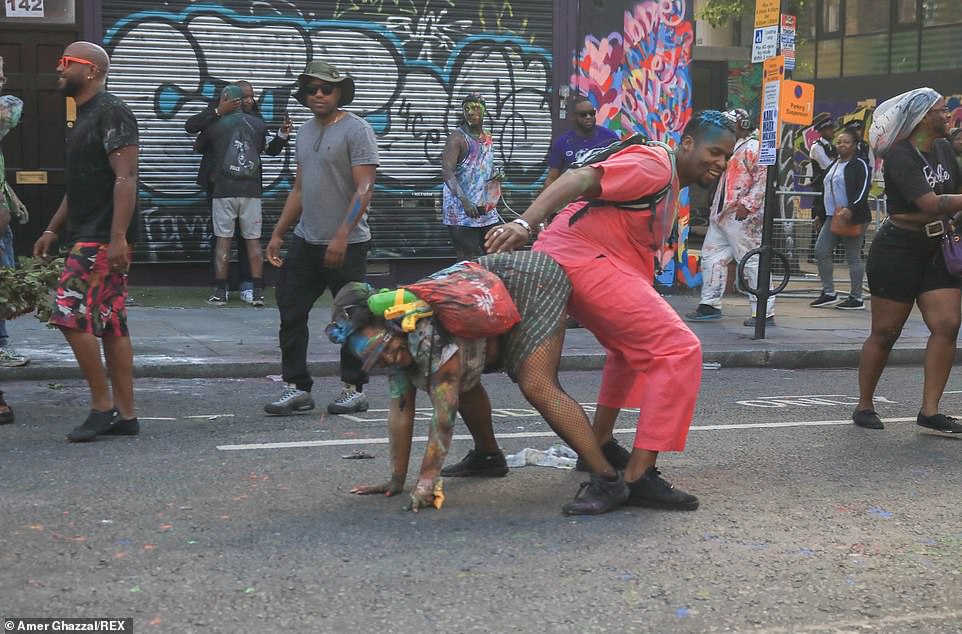 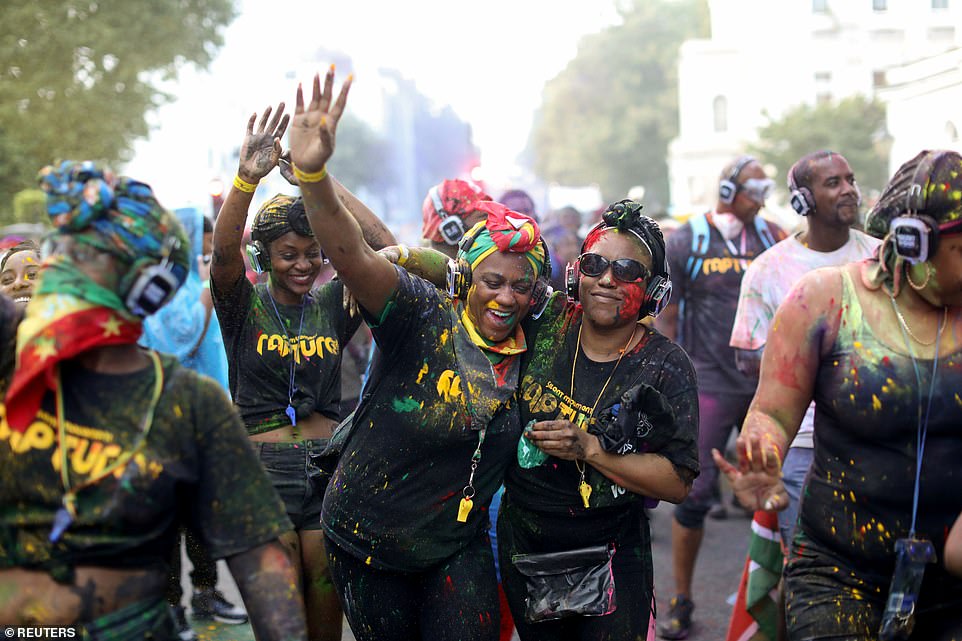 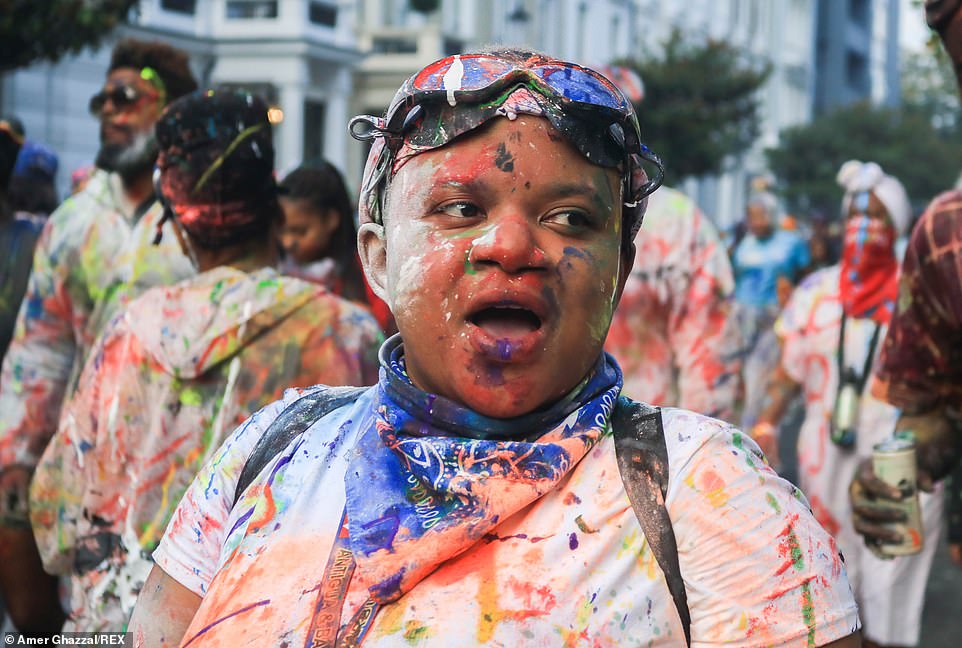 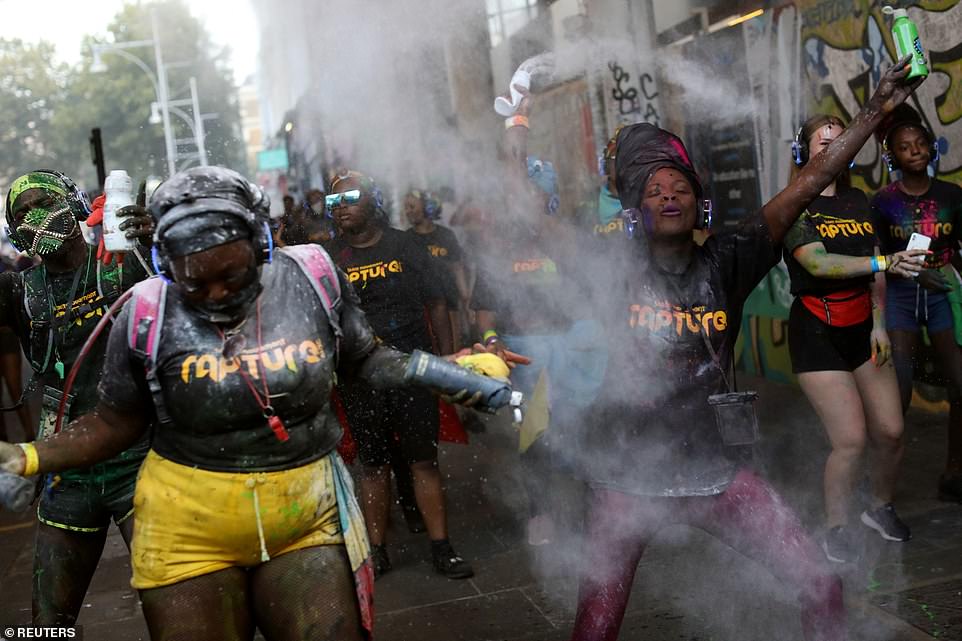 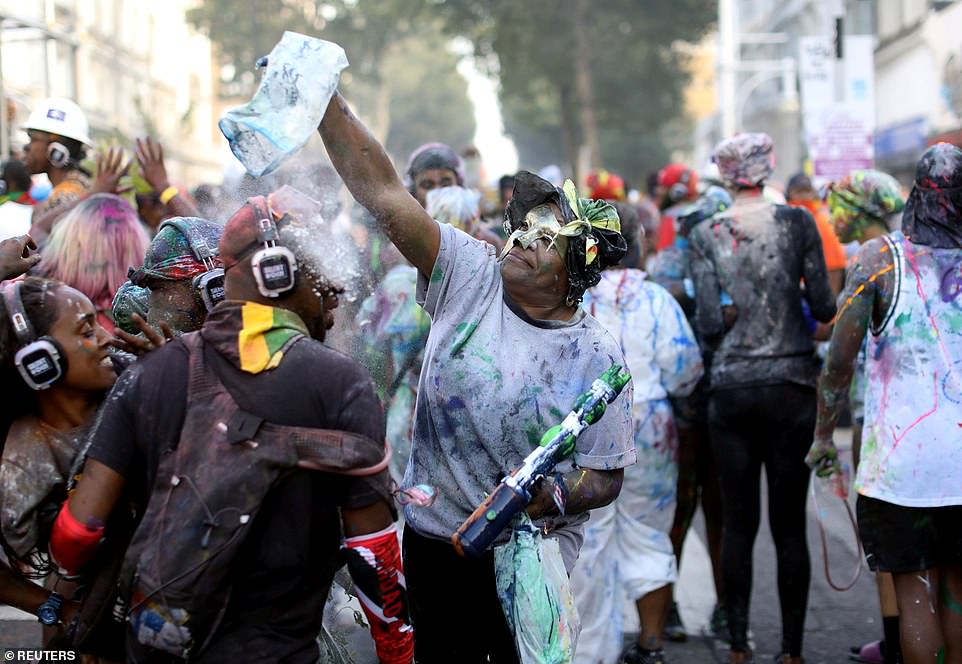 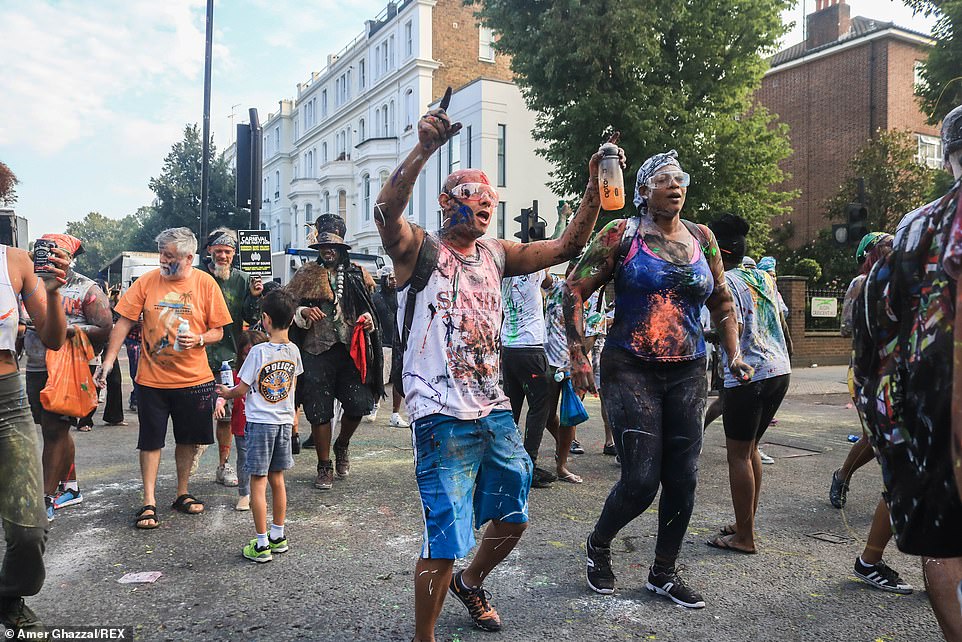 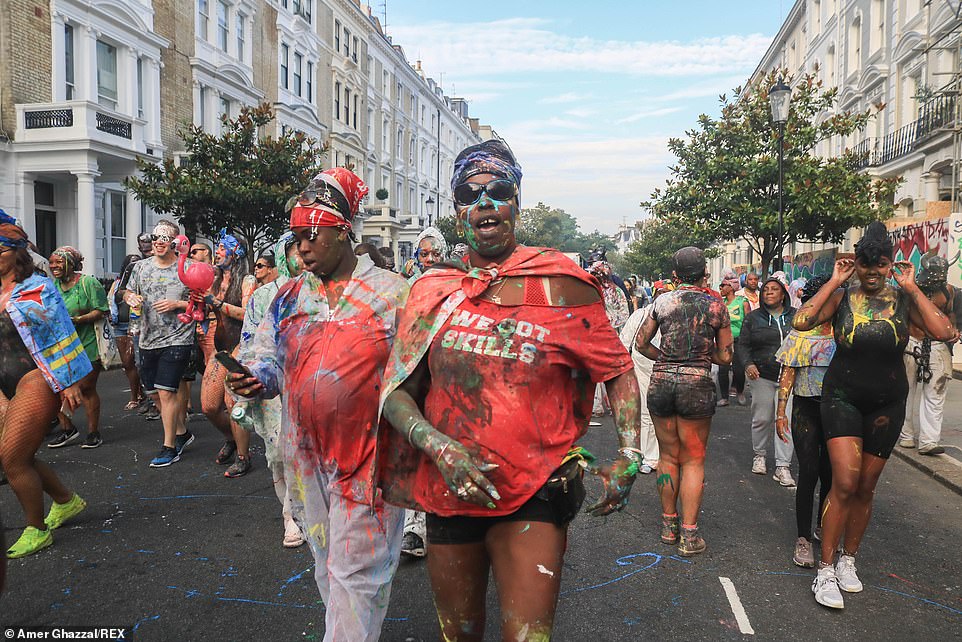 Hundreds of people got to Notting Hill early today to take part in the Caribbean tradition of Jouvert which marks the start of the annual two-day event. Pictured are revellers covered in paint as they make their way through the streets

Arches were used for the first time at the carnival in 2018 and detected offensive weapons including knives and other metal objects, she said.

Last year there were two non life-threatening stabbings over the carnival weekend and some 45 police officers were injured.

She said the force will be ‘taking every step to make sure that doesn’t happen this year’.

Matthew Phillip, the carnival’s executive director, said crime is ‘quite a small statistic in relation to the scale of the event’ and said he wanted to highlight the positives around carnival, describing the longstanding event as a ‘symbol of community cohesion and unity’. 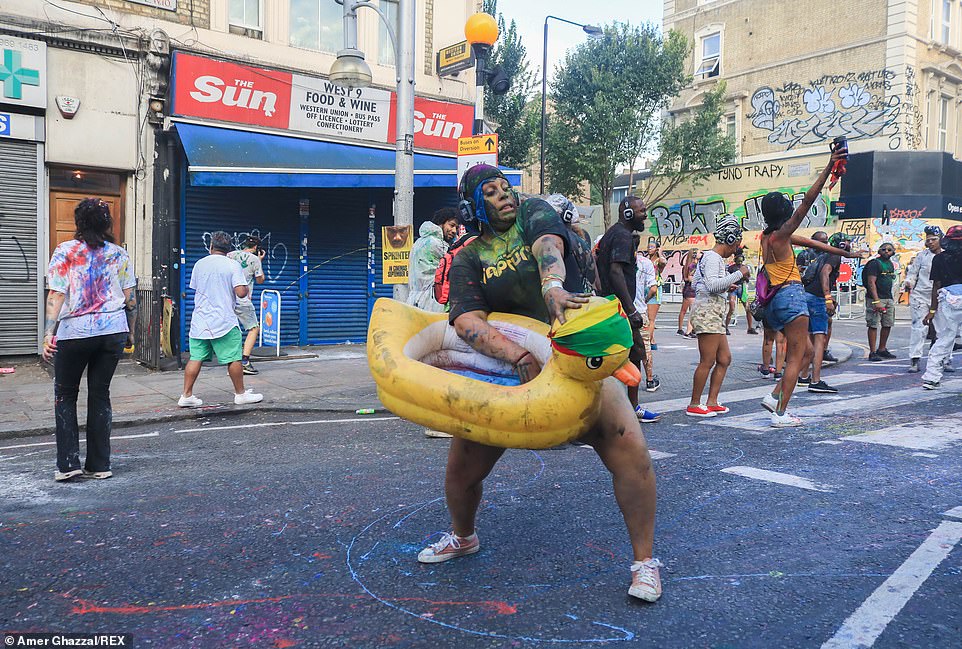 One million people are expected to attend the carnival on Sunday and Monday. Pictured is a woman covered in paint and dancing with a duck shaped paddling pool this morning 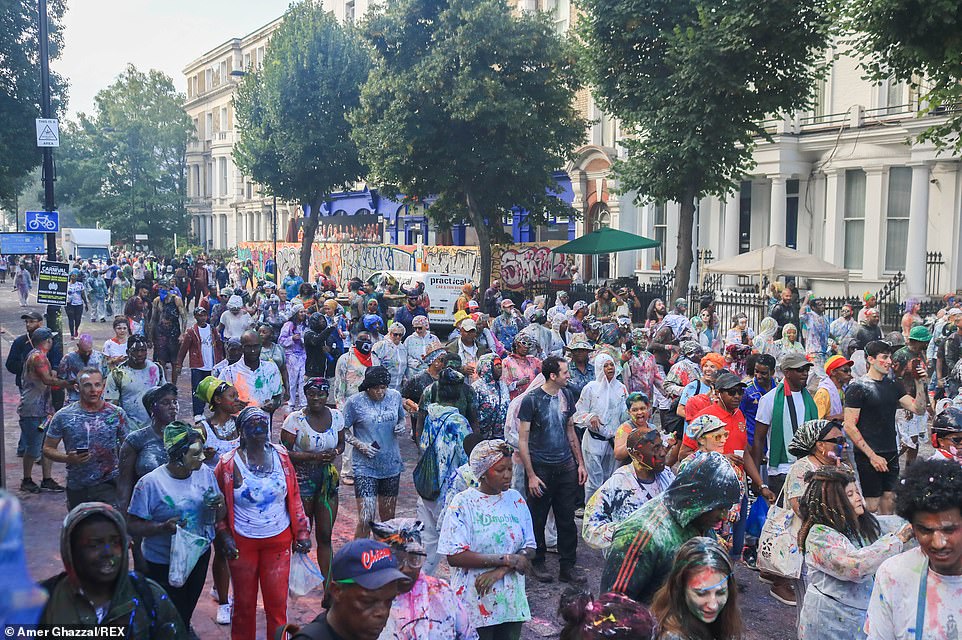 Hundreds of revellers took to the streets before lunch time on Sunday to make the most of Notting Hill Carnival. Some of the houses and businesses in the area ensured to put boards up to protect from paint and mess 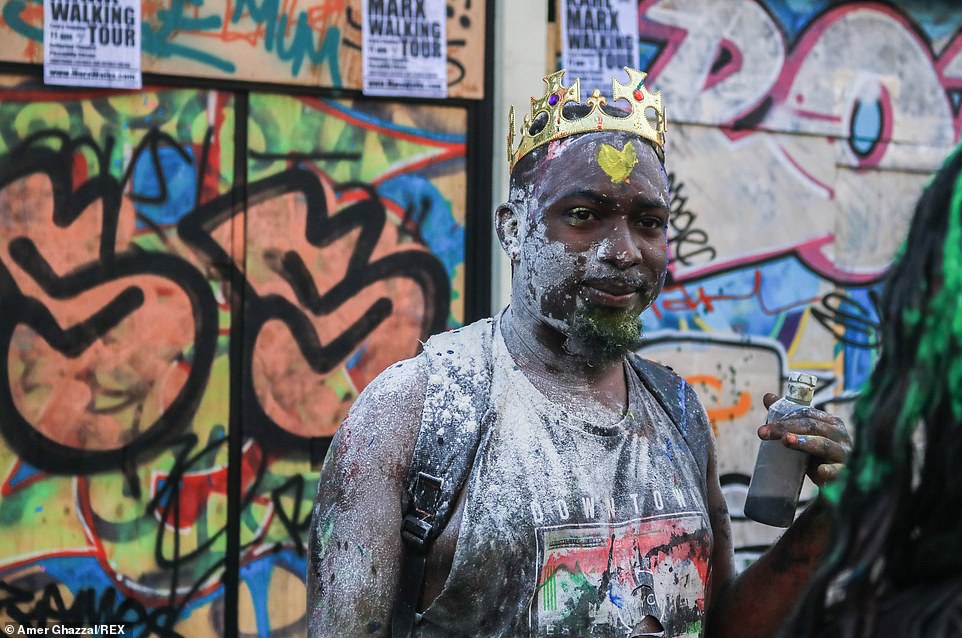 Carnival King: One man covered in paint donned a toy crown for the first day of Notting Hill Carnival this morning 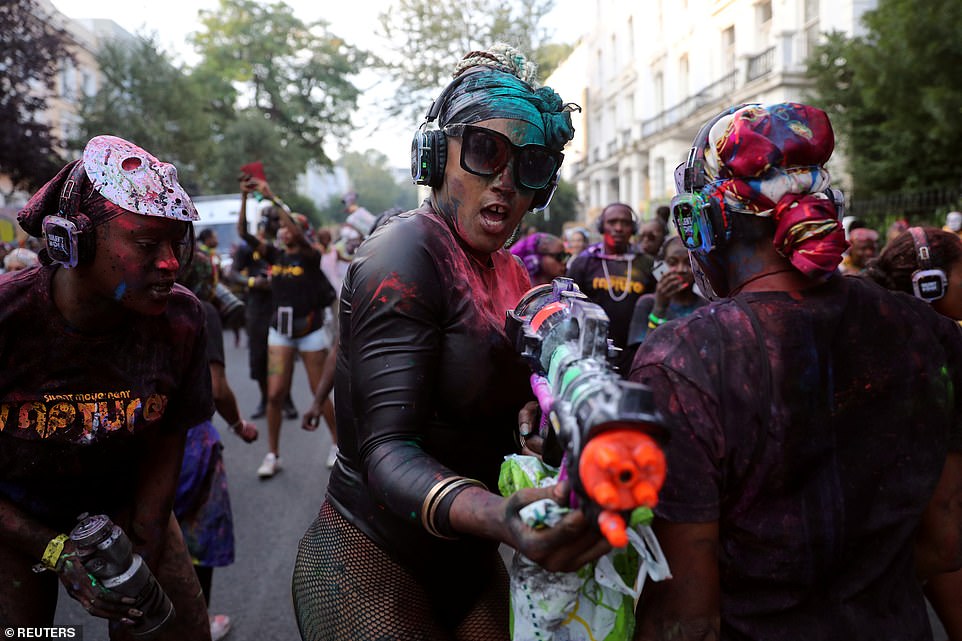 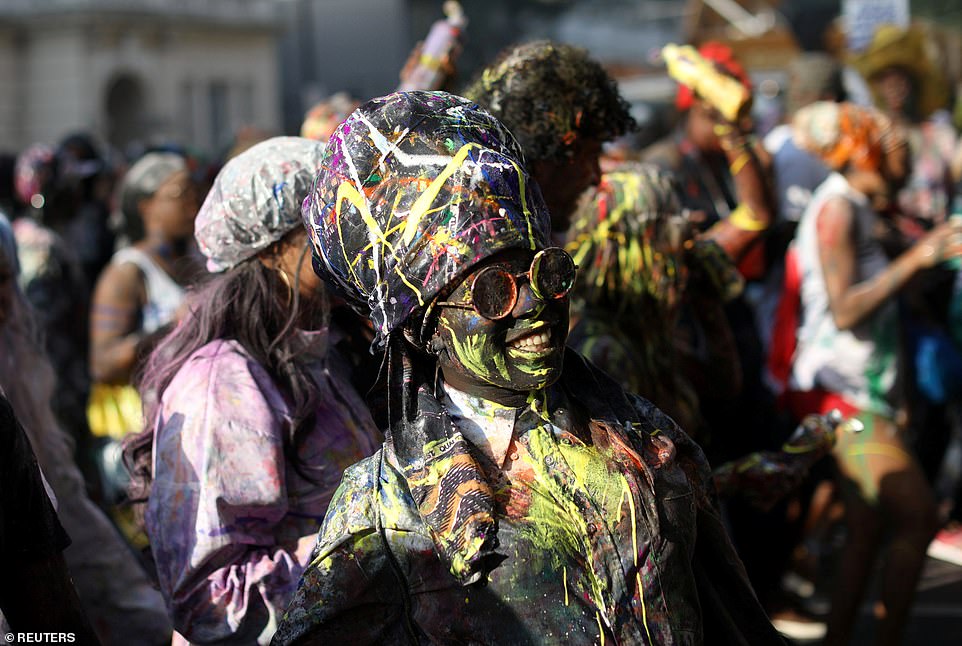 Revellers smile as they get covered with yellow, orange and pink paint at Notting Hill Carnival in west London today

In a message to anyone who may attend the event with a weapon or the intent to commit a crime, he said: ‘Don’t come, you’re not welcome.’ He said visitors this year can expect more ‘amazing costumes’ and ‘wonderful food’.

Ms Chapple advised carnivalgoers to be prepared for very hot weather by taking water or refillable bottles and downloading the official carnival app.

Met Office forecaster Craig Snell said: ‘People certainly need to bring plenty of water with them and slap on the suncream.’

Again this year there will be 72 seconds of silence on both days in memory of those killed in the Grenfell Tower fire in 2017. The tower block is within half a mile of the parade route. 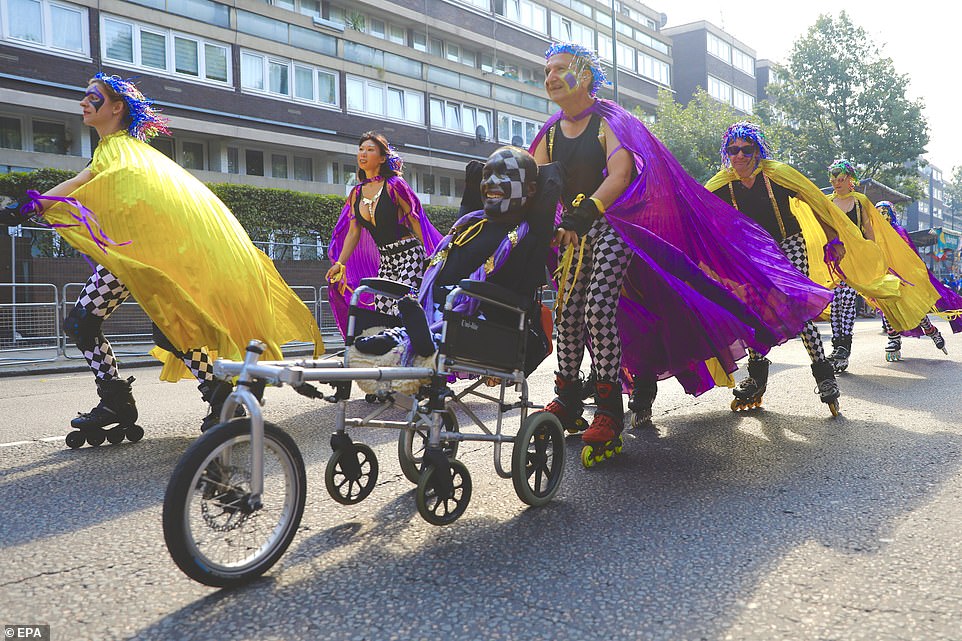 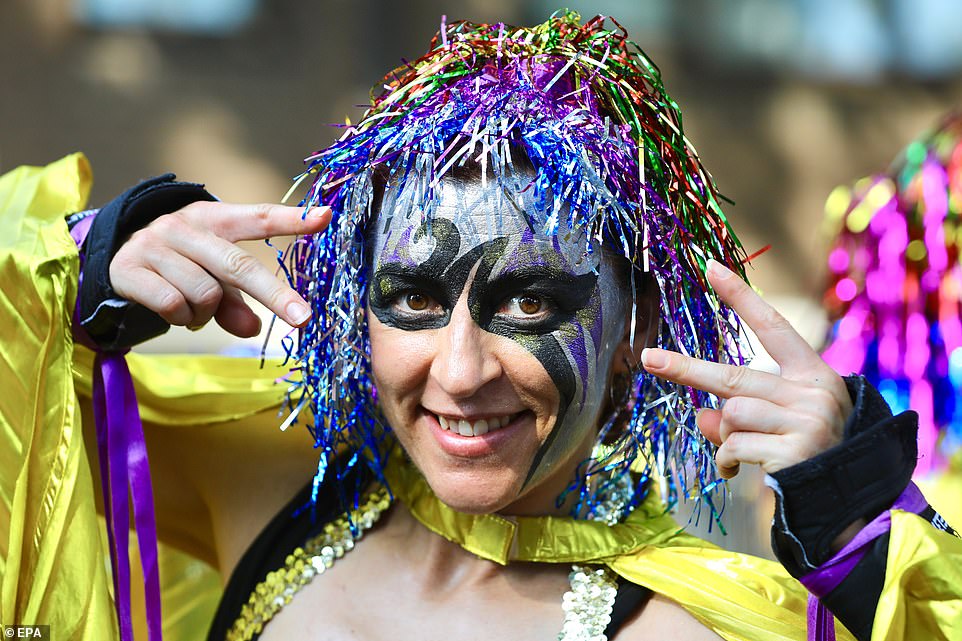 A performer dressed in her flamboyant costume poses for a picture while at Notting Hill Carnival today. Temperatures at the event are predicted to reach 30C this afternoon 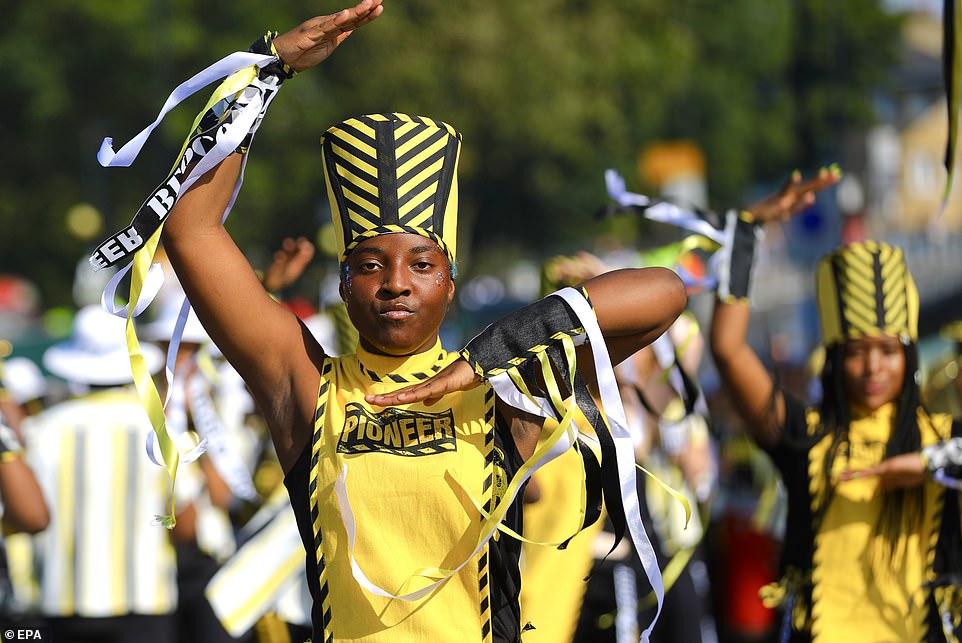