A restaurant has apologised after accidentally presenting two black customers with a bill enclosed in a book which included the N-word on one of the page headings.

Louise Ankle, 31, was having dinner with her friend Matthea Fearon, 32, at The Botanist, in West Bridgford, Nottinghamshire, on Sunday evening.

Miss Ankle, who works in retail, said they enjoyed their meal and asked for the bill, which was presented in a hardback book.

It was designed for customers to open the front cover and find the receipt.

But they flicked through the rest of the pages – which were supposed to be glued together, but had come unstuck – towards the end of the book.

Louise Ankle, 31, was having dinner with friend Matthea Fearon, 32, when their bill was presented to them in a book with the N-word on it 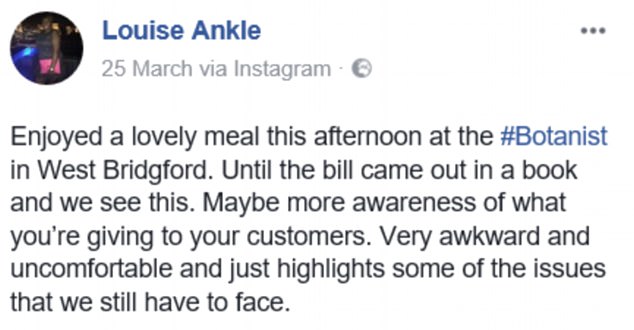 Miss Ankle shared the picture of the book, which is believed to be a collection of essays by Scottish philosopher Thomas Carlyle in support of slavery, on Instagram

And they discovered a page in the book, which displayed the N-word as part of a page heading.

The book is believed to be a collection of essays by Scottish philosopher Thomas Carlyle (1795-1881), who wrote in 1849 arguing in favour of slavery.

Miss Ankle said: ‘We did realise at the time we were the only two black people in the restaurant. Although it did not bother us, we were aware.

‘When [the bill] came, it came in a book which was closed. I did not see the N-word.

‘Matthea opened it and flicked through to the back of the book. Her first reaction was, “Oh my God”. She said it again and was hesitant to show me.

‘[It was] at the back of the book. We both were in shock, we were both flabbergasted. The initial reaction is shock then it quickly turns into anger and upset. It’s something we have never encountered before.

‘We understand totally that accidents happen, but the management team or people running the restaurant have to deal with complaints of that magnitude or size.’

Miss Ankle, of Whitemore, Nottingham, said they approached the manager of the restaurant about what happened – who apologised and allowed them to leave without paying.

She wanted to speak out to warn others.

She added: ‘We have [since] been emailing the manager of the restaurant and we are talking with them at the moment.

‘There’s nothing in particular I want. I do not want an item or to go back to the restaurant. We want to make people aware that these things do happen.’

Miss Fearon, who works in the hospitalityindustry, said: ‘As racial as the word is, this is more to do with ignorance and education.

‘We were just shocked more than anything. You do not expect to go out anywhere and see that word.

‘There were children in the restaurant who could have opened it.’

Miss Ankle (left) said: ‘When [the bill] came, it came in a book which was closed. I did not see the N-word. Matthea (right) opened it and flicked through to the back of the book. Her first reaction was, “Oh my God”. She said it again and was hesitant to show me’ 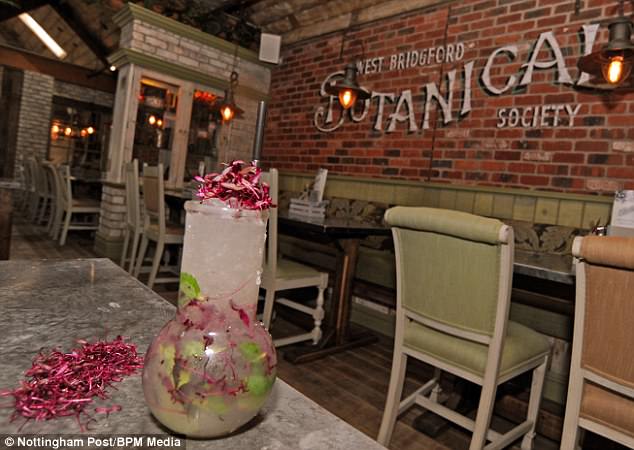 They had been eating at The Botanist, in West Bridgford, Nottinghamshire. The CEO has apologised and explained the chain buy vintage books to be hollowed out and glued together for bills to be placed in

She added: ‘I have spoken to them since, they have apologised profusely. They have advised they are removing the books from the restaurants and they are going to commit to more training with the management team at all the restaurants.

‘We have both been lucky growing up in Nottingham and have never experienced anything like that.’

Chris Hill, CEO of the New World Trading Company, which owns the restaurant chain, said: ‘First of all we are horrified, apologetic and distressed, as you would imagine. We would like to reaffirm our apologies to them and anyone else offended by this.

‘We buy vintage books from our supplier. They arrive to us hollowed-out and glued together. We ask for them to be old and vintage-looking.

‘What looked to have happened is in the book presented to Ms Fearon… the glue came away and the page revealed content and this awful language.’

He added: ‘We do not specify at all what we want. We have withdrawn the books from across the sites and will not reinstate them unless we can be 100 percent satisfied that an incident like this will not reoccur.

‘We will be going back to the supply chain to understand how this would have happened.

‘We withdrew the books immediately the following morning, this was across the country.

‘There’s no title on the front of the book, it had Carlyle on the side. The vast majority of the content had been hollowed out. It was the few pages at back of the book. We had no idea.’