I can’t quite believe I’m here. Down the scruffy, nondescript road, past the shabby industrial estates and under the towering electricity pylons, to Restaurant Sat Bains, a small, smart building a few miles from the centre of Nottingham.

It’s third time lucky. The first time, years back, I nearly made it, only to turn back upon news of a sudden death in the family. The next was scuppered by a heavy bout of flu. But on this bleak, soggy March day, I’m finally here.

And excited. Because Bains is one hell of a cook. I’ve eaten many of his dishes over the years on various television programmes, and he’s never stopped evolving, eternally in search of the very essence of every ingredient. He’s a man seemingly hewn from solid teak, with biceps bigger than my thighs, and barely a shred of fat. But when he smiles, his whole head seems to beam. 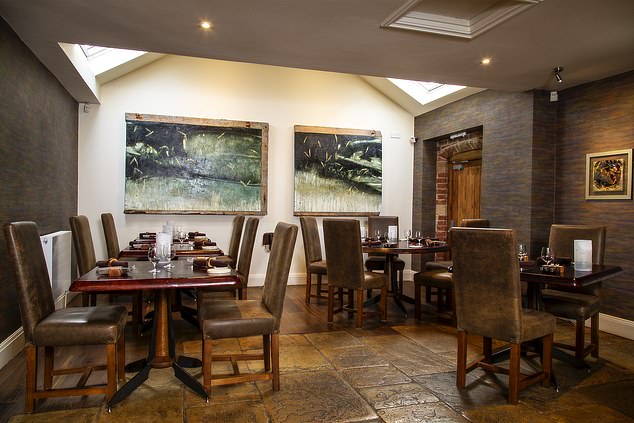 Inside the main dining room at Restaurant Sat Bains. There’s no shouting or histrionics or flying knives, just a calm, quiet intensity

The restaurant is only open for four days of the week, giving their staff a proper break – a rare and admirable policy in a place of this level. And at lunch, it’s either a private room or here, on a lovingly hewn oak table, smack bang in the middle of the kitchen action. There’s no shouting or histrionics or flying knives, just a calm, quiet intensity, broken only by the clatter of knives and the constant whir of the ice-cream machine.

We order the ten-course tasting menu and sit back, awaiting the usual cavalcade of micro-bites and gels, strange plates, edible soil and sous-vided everything. Plus endless guff about ‘stories’ and ‘journeys’ and ‘philosophies’. But from the very first taste, a butternut soup as smooth as Roger Moore lounging in silk pyjamas, I realise how wrong I am. Because this is old-fashioned cooking, mixed seamlessly with the most modern of approaches. Bains has been here for more than 15 years and has no need to show off. There’s an utter confidence to his cooking, a true sense of his character infused into every dish.

That soup comes with fresh herbs wrapped in a brik pastry cigar and a blob of horseradish ice cream. It’s gentle, soft and refined, winter slipping into spring, with a sly dusting of brilliance.

Just like an Isle of Skye scallop roasted in butter, so the outside is lavishly caramelised and the inside perfectly pearlescent. Two wobbling wafers of braised pig’s trotter are an inspired addition, both subtle and substantial, while the whole dish is scented with the merest whisper of garam masala, a gentle nod to Bains’s Sikh roots. Lentils, two varieties, provide their earthy growl. All these extra ingredients are mere vassals, though, slaves to the scallop. They’re there to coax out every last iota of sweetness, to make this sublime piece of shellfish truly shine. Old-school technique meets the most contemporary of inspiration.

Next, sweetbreads, gently poached, then formed into a small burnished sphere and filled with garlic butter. God’s own version of chicken Kiev. It’s astonishing, sitting on a cloud of celeriac puree, gushing hot fat. The work involved to create each blessed ball is extreme, yet the flavours are straightforward and gleefully intense. Garlic, glands, glory. ‘We’re not being challenged,’ says Matthew, who’s long been a fan, ‘but seduced.’ 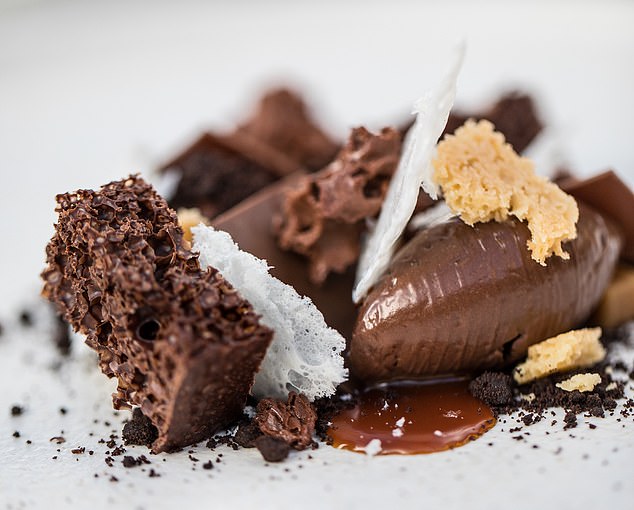 Lenton Lane, inspired by Rocky Road. A take on Rocky Road (lots of chocolate and local sorrel, it’s based on Lenton Lane, the road we clattered down to reach lunch)

And so it goes on. A Maris Peer potato, poached in kombu butter and finished over embers, with tart cream cheese and chives and a great wodge of Danish caviar. Dear God, it’s good, cool and warm, gently salty, with murmurs of the sea. But again, no avant-garde tomfoolery, rather a dish where the flavours don’t just sing, but lustily holler about the earth and the sea. There’s braised oxtail with beetroot, and pot-roast turnip with aged parmesan that elevates this humble root to something worthy of the gods. The balance of every dish is always perfect, the acidity just right. We eat monkfish with a Bordelaise sauce that takes days to prepare, with three bottles of wine, three kinds of stock, and endless reducing and deglazing and simmering. It’s worth every last bead of sweat.

Puddings – a take on Rocky Road (lots of chocolate and local sorrel, it’s based on Lenton Lane, the road we clattered down to reach lunch, with its mud and potholes, because, according to Bains, ‘it looks like s***’), and rhubarb with custard and Mr Whippy ice cream – are every bit as fine. ‘I’d rather be an exciting two-star restaurant than a stagnant three,’ says Bains, as he plonks down green-curry ice cream wrapped in candy floss. Sounds bizarre, tastes, well, just right, chewy with a honk of ginger and kaffir lime. Even the wines, from China and Uruguay, Thailand and Greece, thrill. God knows why this place doesn’t have three Michelin stars, because the food dazzles and beguiles – a truly great chef with a brilliant brigade, all cooking at the peak of their powers. No ponce or pretension, just a hard-crafted paean to culinary art, and the eternal joys of serious eating. All this for £110 per head. Not cheap, but supersonic value. And most definitely worth that three-year wait.

Lunch of duck salad at The Ivy with my old mucker film producer Jonathan Sothcott. Roger Moore may have been mentioned. And Christopher Lee.

To the Cheltenham Festival with my mother, and a lunch of rare beef, pork pie and tongue and tomato salad.