‘He was my mentor and friend. When I needed advice and support he was there’: Emotional Novak Djokovic wears a jacket bearing Kobe Bryant’s number as he fights backs tears during Australian Open tribute to NBA star

An emotional Novak Djokovic paid tribute to Kobe Bryant as he continued his march through the Australian Open draw with a straight-sets victory over Milos Raonic in the quarter-finals.

Djokovic was good friends with the basketball star, who was killed in a helicopter crash on Sunday, and he came out for the match on Rod Laver Arena wearing a jacket bearing the initials KB, Bryant’s numbers eight and 24 and a heart.

Nick Kyrgios had spoken after his defeat by Rafael Nadal on Monday about being inspired by Bryant, and Djokovic certainly looked like a man on a mission in a 6-4 6-3 7-6 (1) victory. The defending champion broke down as he spoke about Bryant afterwards, saying: ‘I don’t know what we could say. It really caught us by surprise.

‘He was one of the greatest athletes of all time, he inspired myself and many other people around the world. I had that fortune to have a personal relationship with him over the last 10 years.

‘When I needed some advice and support, he was there for me. He was my mentor, my friend, it’s just heartbreaking to see what has happened to him and his daughter. It’s unbelievable.’

The only real concern on court for the defending champion came in the third set when he began to experience problems with his contact lenses.

Djokovic took a medical timeout and looked flustered as he continued to seek help from the trainers but that did not stop him finishing off the match in a tie-break.

Raonic had not lost a set all tournament, defeating Stefanos Tsitsipas and Marin Cilic in the last two rounds, but he took a 0-9 record against Djokovic into the contest and soon found his mighty serve under huge pressure.

The Canadian frustrated Djokovic by saving eight break points but he finally took one to claim the first set.

The second seed broke serve again in the fourth game of the second set and, although Raonic managed to hold through the third, the tie-break was one-way traffic. 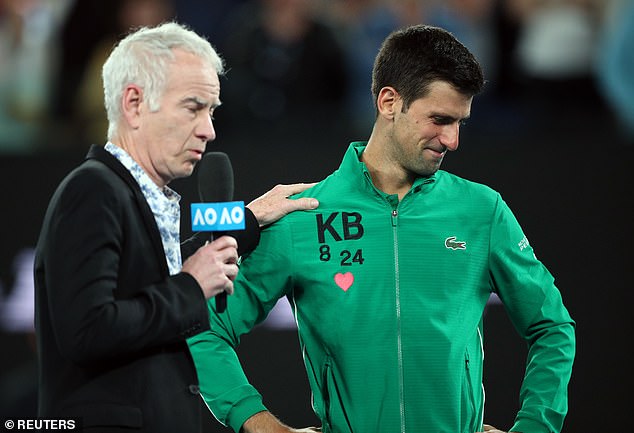 Djokovic appeared overwhelmed when speaking to John McEnroe in Australia 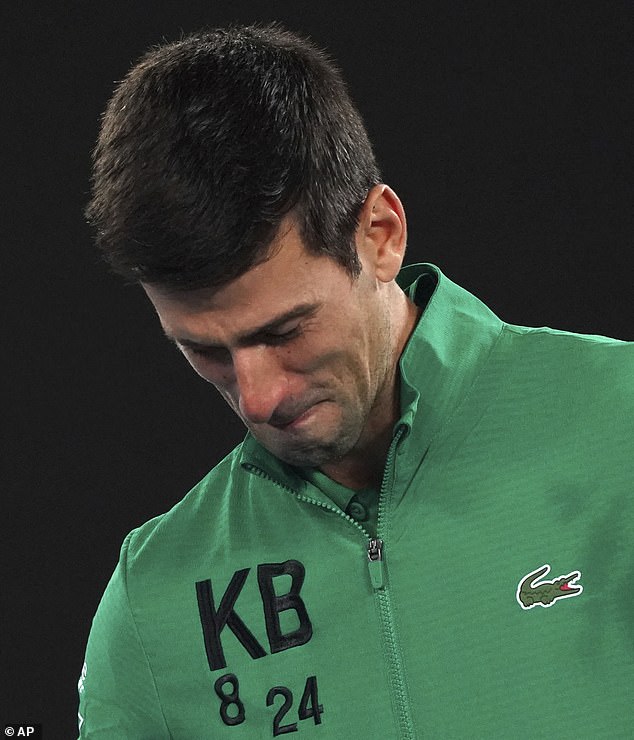 Djokovic now moves through to a last-four clash with his old rival Roger Federer, who saved seven match points to beat Tennys Sandgren earlier on Tuesday.

Looking ahead to the meeting, Djokovic said: ‘Obviously tremendous respect for Roger. He’s been one of the all-time greats and definitely one of my two biggest rivals. The match-ups against Roger and Rafa have made me the player I am today.

‘I hope to get to at least one match point. It was quite amazing what he has done on the court today. It’s not the first time, that’s why he is who he is. Let the better player win.’