Tennis superstar Novak Djokovic is hopeful his three-year ban on entering Australia will be lifted with Anthony Albanese now leading the federal government.

The Serbian world No.1, 35, was sensationally banned from competing at the 2022 Australian Open in January and deported by then Immigration Minister Alex Hawke due to being unvaccinated against Covid-19.

Under Australia’s immigration laws, Djokovic cannot be granted another visa for three years – unless ‘compelling grounds’ see authorities backflip on the decision, which generated global headlines.

With Albanese the new Prime Minister, the outcome could potentially change.

‘In terms of the government, yes, I heard the news,’ Djokovic said.

‘But I don’t know anything about whether my visa is going to be reinstated or whether I’m going to be allowed to come back to Australia.

Tennis superstar Novak Djokovic is hopeful his three-year ban of entering Australia will be lifted by the new Federal government (pictured, on January 16 when he was deported) 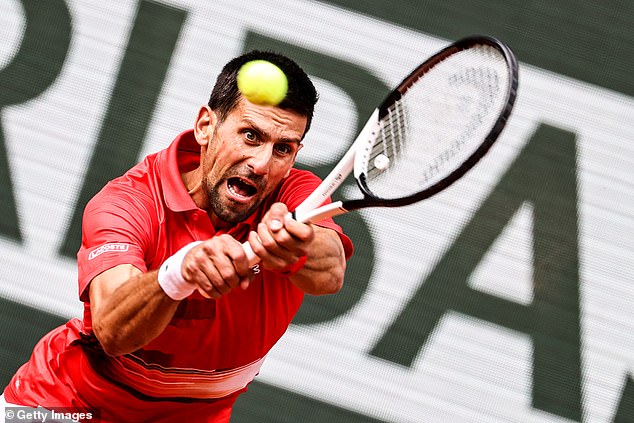 The 35-year-old is aware that Anthony Albanese is the new PM and if given the opportunity, ‘would love’ to see his ban quashed and again compete at Melbourne Park from 2023 onwards

‘I would like to go there and play the Australian Open (in 2023). I don’t hold any grudges.

‘If I have an opportunity to go back, I would love to.’

After he was initially granted access to Australia in early January, Djokovic was then detained at Melbourne Airport for nine hours.

It soon emerged he was given the green light by Tennis Australia to travel from Europe with a pre-tournament exemption to take the court at Melbourne Park – despite his vaccination status being clouded.

On January 5, Djokovic’s visa was cancelled, with the Australian Border Force announcing the player ‘failed to provide appropriate evidence to meet the entry requirements for Australia’. 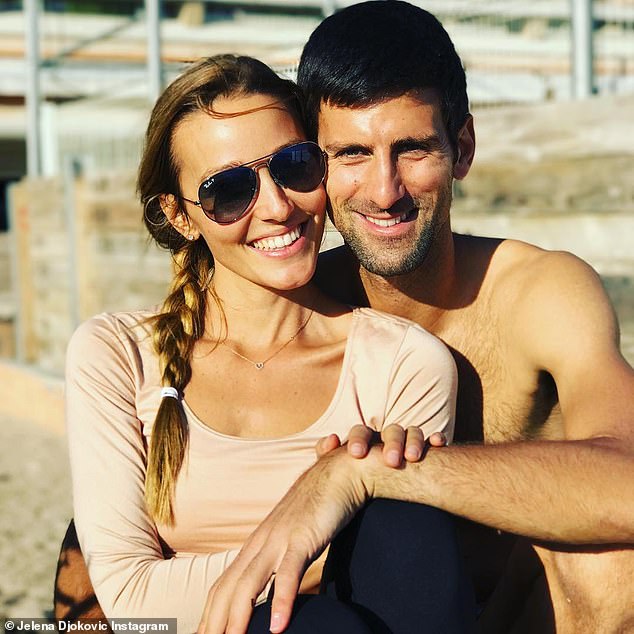 In his native Serbia, government officials and the general public were outraged with the way Novak Djokovic (pictured, with wife Jelena) was treated by authorities in Australia throughout his vaccination saga in January

He cancelled Djokovic’s visa on ‘health and good order grounds, on the basis it was in the public interest to do so’.

Djokovic was detained in a hotel in Carlton for a second time, before he was eventually deported with his entourage on January 16.

In his native Serbia, government officials and the general public were outraged with the way their national hero was treated by authorities.

He is on track to meet 13-time winner Rafael Nadal in the quarter-finals at Roland Garros.

Novak Djokovic’s defence of his Australian Open title was over before it started after Australian immigration officials cancelled his visa for the second time on January 16.

Here’s how the saga has unfolded:

Jan 4: Djokovic tweets that he is on his way to the Australian Open armed with a medical exemption. He wrote on Instagram: ‘I’ve spent fantastic quality time with my loved ones over the break and today I’m heading Down Under with an exemption permission. Let’s go 2022!!’

Jan 5: Then Australian Prime Minister Scott Morrison warns Djokovic he will be on the ‘next plane home’ if his medical exemption is deemed insufficient, and is adamant Djokovic will not receive preferential treatment.

Jan 5: Djokovic’s visa is cancelled upon his arrival in Melbourne. The Australian Border Force announces that the player ‘failed to provide appropriate evidence to meet the entry requirements for Australia’.

Jan 6: Djokovic is sent to the Park Hotel in Melbourne after being refused a visa. He launches an appeal, which is adjourned until 10am on January 10. Serbian president Aleksandar Vucic says Djokovic is the victim of ‘persecution’.

Jan 9: Djokovic’s lawyers claim he was granted a vaccine exemption to enter Australia because he recorded a positive Covid-19 test in Serbia on December 16. However, social media posts suggest he attended a number of social events in the days following his apparent diagnosis.

Jan 10: Djokovic’s visa cancellation is quashed by Judge Anthony Kelly, who orders the Australian Government to pay legal costs and release Djokovic from detention within half-an-hour. Djokovic says he is ‘pleased and grateful’ and wishes to ‘stay and try to compete’.

Jan 11: Djokovic’s title defence remains in doubt as the Australian Immigration Minister ponders whether to over-ride the court’s ruling, reportedly due to an alleged misleading claim made by Djokovic on his entry form relating to his movements in the 14 days prior to arrival in Australia.

Jan 12: Djokovic admits making an ‘error of judgement’ by attending an interview with a French journalist while Covid positive. He adds that, although he attended a children’s tennis event the day after being tested, he did not receive notification of the positive test until after the event.

Jan 13: Djokovic is drawn to face fellow Serb Miomir Kecmanovic in the first round.

Jan 14: Immigration minister Minister Alex Hawke cancels Djokovic’s visa for a second time, saying in a statement it was ‘on health and good order grounds’.

Jan 15: Djokovic’s lawyers have a minor win in court, with the judge agreeing to have the matter heard by a panel of three judges on Sunday – a decision fiercely opposed by the government

Jan 16: Djokovic LOSES his appeal and is told he will be deported. He is later seen at Melbourne Airport as he and his team leave Australia.