Novak Djokovic will find out his Australia Open fate THIS MORNING

Novak Djokovic is set to learn his Australian Open fate on Wednesday morning after yet another kink in his story emerged.

The world No 1 was found to have falsified the answer on his immigration forms relating to his whereabouts for the 14 days prior to entering Australia — an offence which theoretically carries a maximum 12-month prison sentence.

In a further twist, it emerged that his travel declaration form was filled out by Tennis Australia, further illustrating how closely linked they were with his whole application process.

These factors were being weighed up by Canberra immigration minister Alex Hawke, who is due to rule today on whether the unvaccinated star could stay on in the country.

Hawke has the power to override the court decision made on Monday which released Djokovic from his hotel.

Somehow the player, his management and Tennis Australia contrived to give a wrong answer, ticking the ‘No’ box to the question of whether he had travelled in the two weeks prior to his arrival.

This is surprising, to say the least, as the 34-year-old Serb seemed to have a plan to prepare as best he could for Australia.

He followed a well-trodden path for someone who spends most of his free weeks between three bases — Belgrade, Monaco and Marbella. On Christmas Day he was pictured in the Serb capital, but by New Year’s Eve he was videoed practising at the Puente Romano tennis and beach resort in southern Spain. 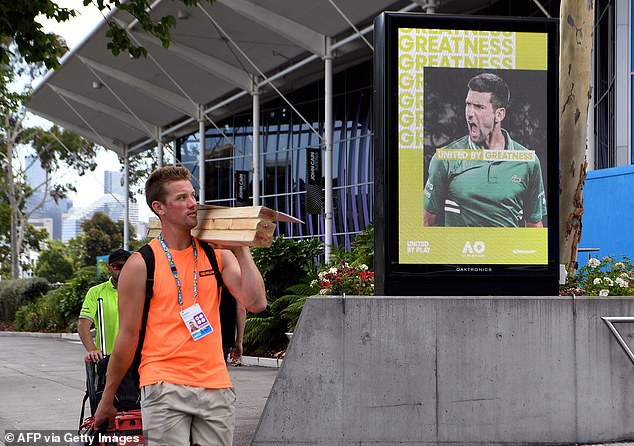 It adds to the two other areas of unanswered questions, which surround both his positive test on December 16 and missing the Tennis Australia deadline of December 10 to apply for a vaccine exemption.

One well-placed source told Sportsmail that Djokovic’s application was twice rejected before December 10, although that could not be verified.

The mystery around the December 16 test deepened last night when evidence emerged from German publication Der Spiegel — using the QR barcode on Djokovic’s court documents — suggesting it was actually logged on December 26.

Djokovic has yet to explain why he was present at a public event and a photoshoot on the 17th and 18th. And a positive test on Boxing Day, rather than December 16, could explain this. 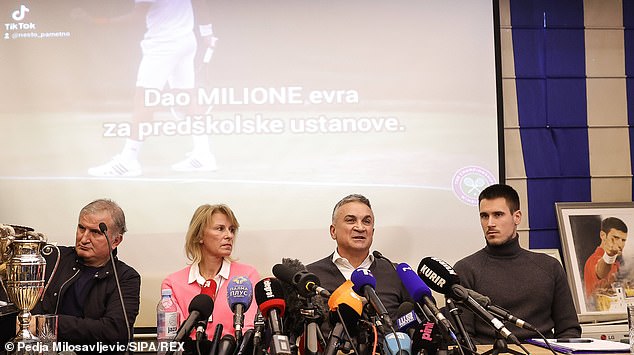 Djokovic’s family held a press conference on Monday, but ended it abruptly during a Q&A

Being diagnosed with Covid after Christmas would have caused even more problems for his travel, both to Spain in late December and Australia on January 4 — particularly for someone who has not been vaccinated.

Should Djokovic be allowed to defend his title he will be one of a tiny minority of unjabbed people allowed into Melbourne Park, as it is otherwise mandatory for players, workers and spectators.

In a comedic turn of events, it also emerged that the player had to be granted an exemption to attend the offices of his law firm, Hall and Wilcox who, according to the Sydney Morning Herald, do not allow unvaccinated people through their front door.

As the outcome of the ministry’s investigation was awaited, player reaction continued to come in. Andy Murray bemoaned how the whole episode was overshadowing the build-up to the grand slam. 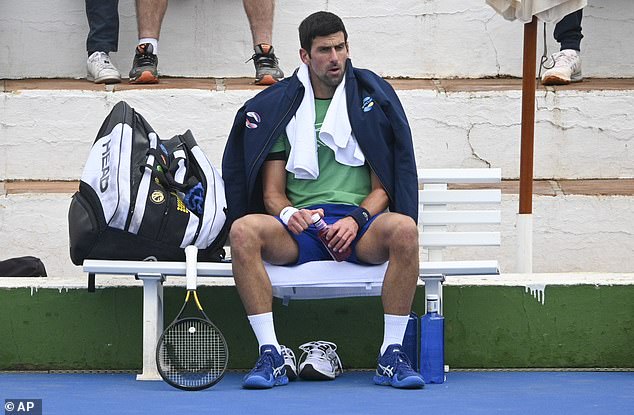 Djokovic has come under fire from his fellow professionals, particularyl Marton Fucsovics

‘We want the best players there, but there are questions to be answered. Until that happens, it’s tough to give a definitive opinion,’ he added.

A stronger view came from world No38 Marton Fucsovics.

‘People’s health is paramount and there are rules that were outlined months ago, namely that everyone should vaccinate themselves and Djokovic didn’t,’ he said. ‘From this point of view, I don’t think he should have the right to be here.’