There are currently 54 criminals on Europol’s Most Wanted list. The felons on the list are wanted for a host of crimes from murder, racketeering, human trafficking, drug dealing and fraud.

Some of those on the list have arrived in Europe from different continents. But all are wanted by at least one police force in Europe for the most serious offences.

Among those on the list is Friedrich Felzmann, 67, who is suspected of shooting two people dead and seriously wounding a third in the Stiwoll, Styria area on October 29, 2017. 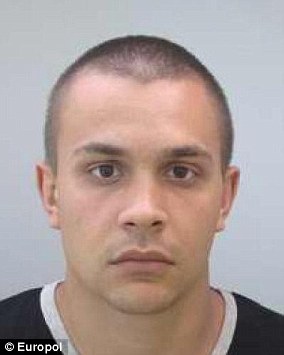 Austrian police believe Felzmann drove off in his car into a forest where he disappeared on foot.

Svetlozar Valentiov Stoilov, 29, is on the run from Bulgarian authorities having being found guilty of murdering Stoyan Baltov on December 5, 2008.

He is facing an 18-year jail term upon his recapture. 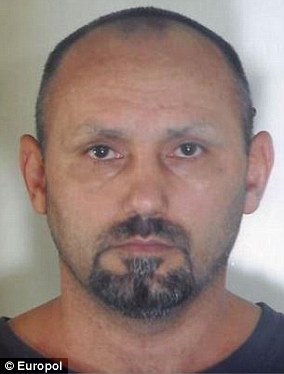 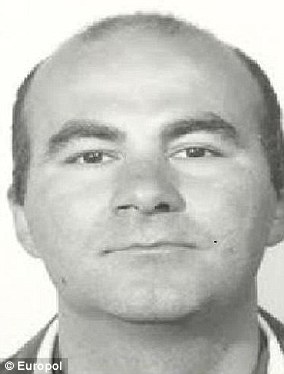 Vasileios Palaiokostas (left), 52, is suspected of numerous crimes including escaping from custody in February 2009 after commandeering a helicopter. Theodorou Nicolas (right), 47, is wanted by Belgian authorities on suspicion of two counts of attempted murder

Greek authorities have offered a €1 million reward for the capture of Vasileios Palaiokostas, 52, who managed to escape from custody after commandeering a helicopter in February 2009.

He managed to vanish following his escape. Officials suspect Palaiokostas was involved in kidnapping, hostage taking, murder and armed robbery, as well as the illegal seizure of aircraft and ships.

He is also suspected of possession of explosives, blackmail and the unlawful seizure of a helicopter.

Belgian authorities said Theodoru Nicolas is facing 25 years in prison over the attempted murder of two car salesmen  in Montroeul-sur-Haine on November, 15, 1999. 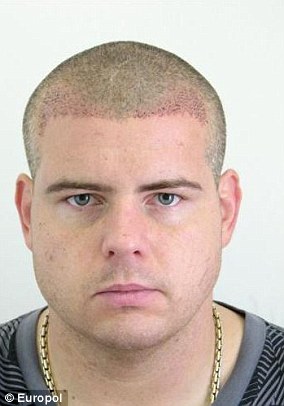 Marian Stajgar, 38, is wanted by Slovak authorities for murder. He has also had hair transplant surgery, officials confirmed

They said he has several scars from being shot in previous shoot-outs.

Officers also confirmed he has undergone hair transplantation surgery and is very violent and dangerous. 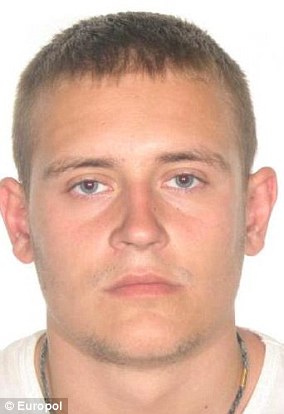 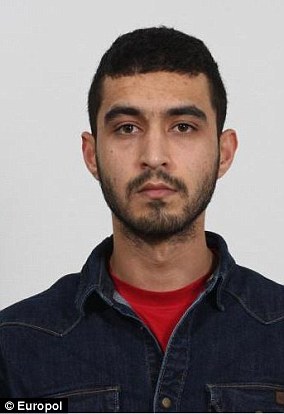 Vjaceslavs Makarzeckis (left), 31, is suspected by Latvian authorities of being involved in a major methamphetamine drugs ring, while Afghan national Amin Qatra (right), 29, is wanted on suspicion of murder by Danish authorities

Vjaceslavs Makarzeckis, 31, is suspected by Latvian authorities of being a member of an organised crime group who imported large quantities of methamphetamine into the country.

Local police targeted the gang in 2013 and made several arrests and seized significant quantities of methamphetamine.

Afghan national Amin Qatra, 29, is wanted by Danish police  in connection with a murder in Velje on June 1, 2016.

Officials said Qatra slit is victim’s throat before escaping from the scene. His current location is unknown. 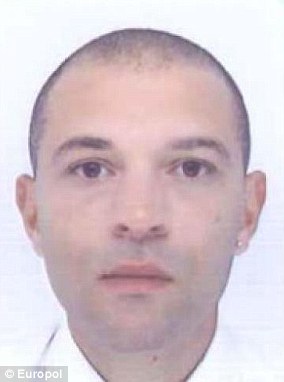 Karim Ouali, 42, is wanted by French authorities after he attacked a co-worker in the air traffic control tower of the Bale Mulhouse airport.

On April 27, 2011 Ouali is suspected of attacking one of his colleagues with a ceremonial axe used by indigenous people in Quebec, Canada.

After killing his colleague, Ouali fled.

Officials claimed he was in a psychotic state at the time of the murder. He is said to have tribal tattoos on his chest as well as a beauty mark on his right cheek.

He may also be wearing a wig. 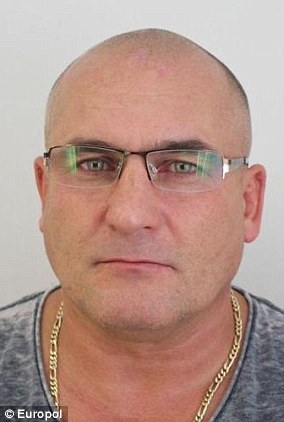 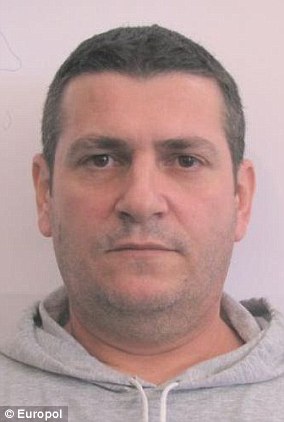 Henrich Szucs (left), 50,  is accused of being involved in a major criminal organisation in Slovakia, while Cypriot authorities want to speak to Gani Burelli (right), 50, in relation to murder

Henrich Szucs, 50, who has several aliases, is suspected by authorities in Slovakia of being part of a major criminal organisation involved in racketeering and extortion.

Police in Slovakia have issued a European Arrest Warrant to detain Szucs, who is believed to be the criminal mastermind behind the organisation.

Gani Burelli, 50, from Albania, is suspected of being involved in the murder of three people on June 23, 2016.

He is accused of entering a restaurant in Ayia Napa with an accomplice wearing balaclavas.

The gang, who were armed with pistols and automatic weapons, opened fire and killed a businessman, a police officer and his wife. The police officer’s two young children were in the restaurant at the time.

A second police officer was seriously injured, but he managed to shoot dead the accomplice.

Burelli is believed to have fled the scene in a car which was later found burned out.

He is also suspected of being involved in several other murders in Ayia Napa as part of an Albanian crime gang. 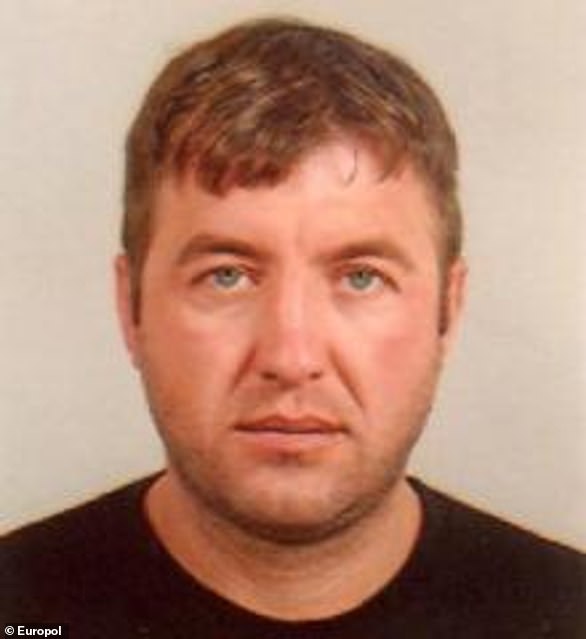 Ivaylo Dimitrov Mitev (above), 45, of Bulgaria, attacked Angel Vasiley in June 2000 in the town of Samokov. His victim suffered a brain haemorrhage. Mitev was sentenced to three years in prison 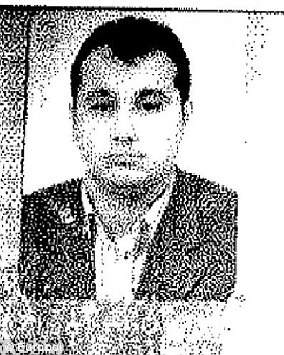 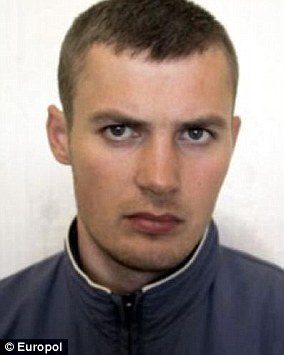 Mustafa Korsurgeli (left), 36, is wanted by Maltese authorities in connection with the murder of his then partner in June 2011. Ringaila Algimantas (right), 39, is suspected of involvement in a major armed Lithuanian crime gang Agurkiniai between 2005 and 2014

Mustafa Korsurgeli, 36, is wanted by Maltese authorities in connection with the murder of his then partner in June 2011.

Turkish national Mustafa Korsugeli, 35, was living in a rented apartment with his girlfriend in St Paul’s Bay.

Authorities determined the unnamed victim had been discovered on June 4, 2011 – two days after she died and Kosurgeli fled Malta on an international flight to Istanbul.

Ringaila Algimantas, 39, is wanted by Lithuanian authorities for drugs smuggling and being a member a major international crime gang.

Authorities believe Algimantas is a member of the feared Agurkinia crime gang who have been known to operate across Europe in areas with large Lithuanian populations.

Algimantas is known to speak both Lithuanian and Russian.

Intelligence suggests he was a member of the gang at least during the period 2005-2014. 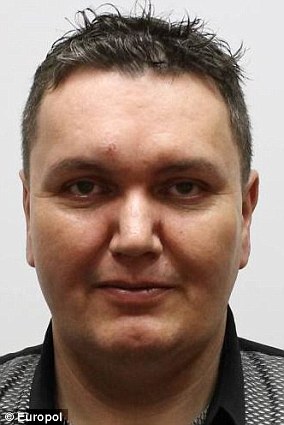 Petr Zdrazil, is accused of committing a fraud affecting the interests of the European Union and is facing six years in prison upon his recapture

Petr Zdrazil, 50, is wanted by Czech authorities for a €290,000 fraud where he ripped off truck hauliers who supplied him with a service without payment.

To get away with his criminal enterprise, Zdrazil used a false identity.

He has been sentenced by Czech authorities to a six-year jail term. 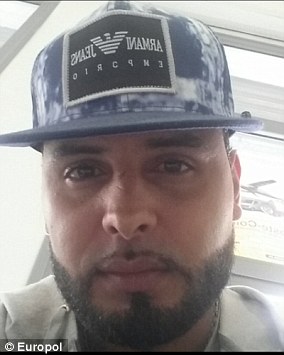 Mohamed Ezzi, 30, is wanted by authorities in Luxembourg concerning allegations he viciously assaulted his wife leaving her with partial blindness and unable to work.

The Tunisian-born suspect has  been accused of violently assaulting his wife on many occasions and has been sentenced to 10 years in jail.

The attacks happened over a five-year period between 2009 and 2014. 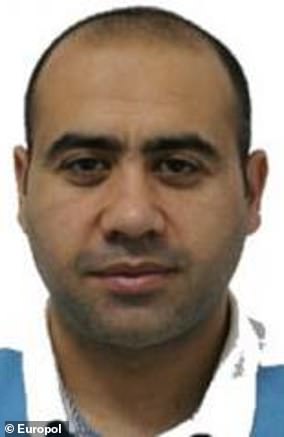 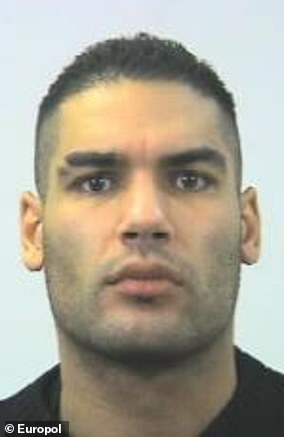 In June 2006, Omar Mukhles (left), now 38, from Syria, planned and helped his brother to illegally leave Romania. Mike Soldier (right), 38, of Finland, faces almost four years in jail for an aggravated drug offence and driving while intoxicated, among other crimes

In June 2006, Omar Mukhles, now 38, from Syria, planned and helped his brother to illegally  leave Romania.

Mukhles knew that his brother Omar Hayssam was sent to trial for terrorism by organising and financing the kidnapping of three Romanian journalists in Iraq.

Mike Soldier, 38, of Finland, faces almost four years in jail for an aggravated drug offence, causing a serious traffic hazard, driving while intoxicated and a firearms offence, among others. 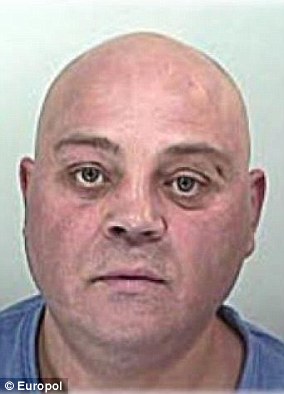 Zoltan Plank, 51, is suspected of attempted murder and robbery

Zoltan Plank and several business acquaintances are accused of hiring two hit men on August 25, 2014 to murder a fellow associate.

The gang members stabbed the man repeatedly and left him for dead, although he survived.

Plank, 51, is later accused of holding up some Chinese tourists while pretending to be a police officer. The gang stole an estimated €1.28 million.

The gang opened fire using a machine gun to stop several people who attempted to follow them by car.

Hungarian authorities believe Plank may have grown his hair long. 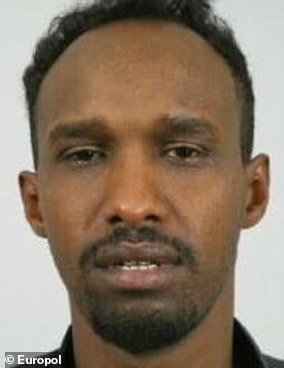 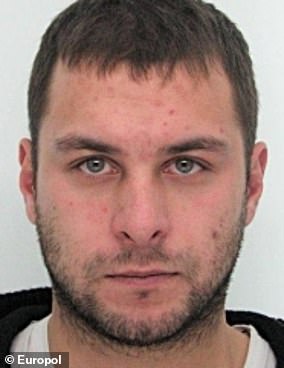 Mohamad Ahmed Hassan (left), 35, from Somalia, is wanted for stabbing a victim to death with a knife on August 28, 2009 in Brønshøj, Denmark. In 2010, Ernest Gammer (right) attacked a man in a nightclub in Tallinn and stabbed him several times, severely injuring him. Gammer was convicted by the court in 2013 to four years’ imprisonment 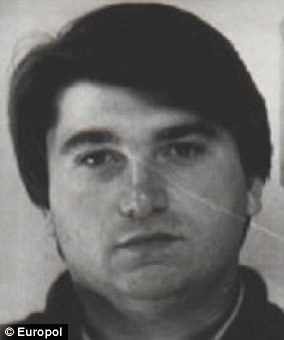 Giovnanni Motsi, 60, is wanted by Italian authorities, and is suspected of being in the Mafia

Giovanni Motsi is accused of being a member of the Mafia by Italian authorities and is suspected of involvement in several brutal murders.

He is also accused of being engaged in a criminal conspiracy.

The 60-year-old Italian faces life imprisonment if captured by police.