Almost 60 per cent of 16-17 year olds had signs of immunity, despite vaccines not being routinely offered to the youngest age group.

Ministers are set to expand the inoculation roll-out to older teenagers today to stop an autumn surge in infections when schools return.

But experts have questioned the ‘pointless’ plans, saying youngsters — who face a tiny risk of dying — are gradually gaining immunity through natural exposure.

Others warned natural immunity may only be ‘short-lived’, making it important for adults to get vaccinated.

The antibody data, released by the Office for National Statistics (ONS), also found almost 94 per cent of people in England now had Covid antibodies.

Scientists called the findings ‘highly reassuring’ and claimed it was ‘no wonder’ the country was seeing a fall in Covid cases.

And they said the true figure would likely be much higher because antibodies aren’t immediately made by the immune system, meaning the tests would miss immunity triggered by infections that occurred during the July surge.

Covid vaccines are the main factor behind the high levels, with nearly 90 per cent of over-18s having had both doses.

Office for National Statistics testing revealed 80 per cent of 16 to 24-year-olds had Covid antibodies by July 18. This is likely down to vaccines for over-18s and immunity from previous infection 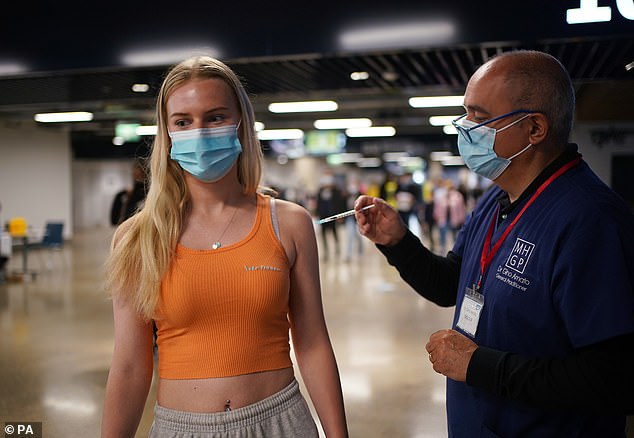 Ministers are set to announce they are opening up the drive to 1.5million 16 and 17-year-olds today after a U-turn from top scientists. Pictured is an 18-year-old being vaccinated at Tottenham Hotspur’s Stadium, North London 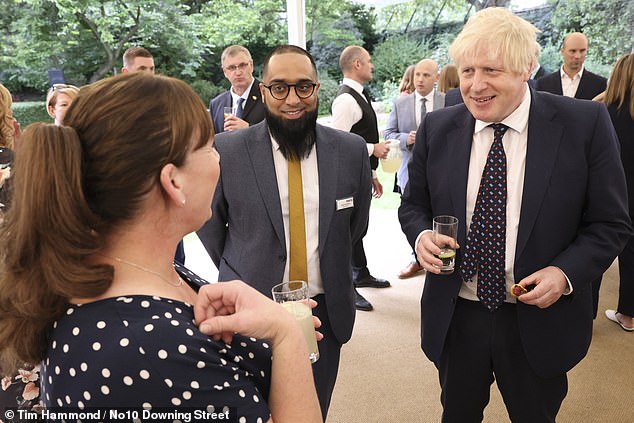 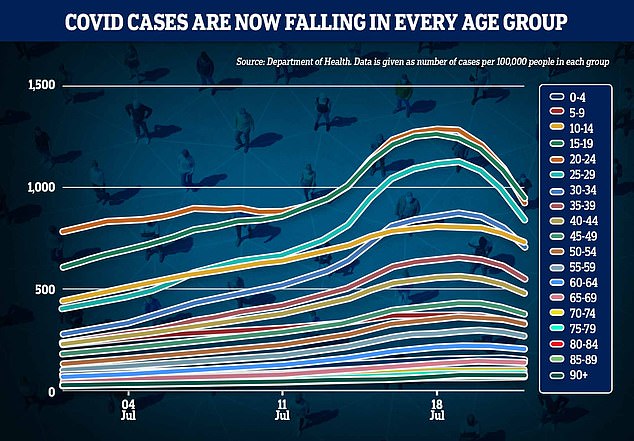 This graph shows the seven-day Covid infection rate by age group since the start of June. It reveals cases have been significantly higher in younger age groups

The ONS — which analyses tens of thousands of blood samples every fortnight — doesn’t break down whether antibodies came from jabs or infection.

Their presence generally means a person has at least some protection against the disease and won’t fall ill.

Testing positive does not make someone completely immune, however, and people who have them can still get sick.

Getting a positive test result means only that there were a certain amount of them in their body at the time of the test.

Scientists say levels dip naturally over time and people may not have any detectable antibodies now — even if they did so last year.

And likewise, people who test negative may still be protected from the virus because there are other parts of the immune system geared up to fight off invaders, such as T cells.

What is the evidence on vaccinating children?

Covid is very rarely severe or fatal in children.

Just one in 500,000 under-18s are at risk of dying from the virus, researchers at leading UK universities found this month.

That means any vaccine given to youngsters has to be very safe because the risk-harm benefit from them catching the virus is so low.

The fact that older people have a higher chance of being hospitalised or dying from the virus outweighs the side effects the vaccine could have on them.

But as children are less affected from the virus, some side effects could be riskier to them than the virus itself.

Since the vaccine rollout has been expanded to children in countries including the US and Israel, there have been reports of an extremely rare reported cases of myocarditis and pericarditis.

Myocarditis is inflammation of the heart muscle, while pericarditis is when the protective layer around the heart gets inflamed.

There are no specific causes of the conditions but they are usually triggered by a virus.

The UK is expected to wait for more data from clinical trials and other countries immunising children before making a decision to offer all youngster the jab.

The US, Israel and France are already giving the vaccine to over-12s.

In addition to safety concerns, children’s bodies and immune systems behave differently, meaning they might have different treatment needs.

Youngsters may need different doses or needle sizes depending on their height, weight and age – which is why most children are only vaccinated after safety has been well-documented in the adult population.

Professor Paul Hunter, an infectious diseases expert at the University of East Anglia, said today’s figures were ‘highly reassuring’ because they meant the ‘vast majority’ of the country’s adults had some form of Covid protection.

And he said antibody levels were likely already even higher.

Professor Hunter added: ‘Given it takes about eight to ten days for antibodies to develop after infection or after immunization, this figure is an underestimate and would not take account of any infections or immunizations after the July 4 and so would not include the effect of the big peak of cases that we saw in mid-July.’

Despite high rates of antibodies among 16 and 17 year olds, he added vaccinating them may still be ‘the correct option even though most will already be immune’.

Professor Jonathan Ball, a virologist at Nottingham University, said: ‘With more than 90 per cent of people testing positive for the presence of Covid antibodies, it’s no wonder we are seeing a decline in cases.

‘But we should not get complacent.

‘The virus hasn’t gone away and it will continue to circulate in future.

‘To limit the extent and potential harm of inevitable future outbreaks it is important to maintain high levels of population immunity.

‘So I would urge everyone who is eligible, to get vaccinated, and for those already jabbed, to get any boosters offered in future.’

He added: ‘There will undoubtedly be a large number of people immune through natural infection, but if natural immunity to this coronavirus is similar to that generated to the seasonal coronaviruses, then it is likely to be short-lived. This is another reason to get fully jabbed.’

Office for National Statistics figures showed 739 of 1,039 youngsters aged 16 to 24 who had their blood tested had Covid antibodies.

This suggested that 79.8 per cent of the more than 4million people in this age group in England would test positive for the antibodies if they were all swabbed.

Immunity in the younger age groups is likely linked to vaccines, which were offered to over-18s from mid-June.

But NHS England figures show 1.6million 18 to 24-year-olds — or 35 per cent — are still yet to get their first dose. For comparison, among over-80s almost everyone has been jabbed.

Those aged 16 and 17 have not been offered Covid vaccines.

Ministers are said to be keen to push the immunisation drive into younger age groups in order to prevent an Autumn surge in cases when schools return.

Universities minister Michelle Donelan said ministers were expecting an ‘imminent’ announcement from the JCVI on rolling out jabs to more teenagers.

Asked whether parents would be consulted on whether they wanted their children to receive a vaccine, Ms Donelan said she would not ‘preempt’ the announcement.

Speaking on Sky News this morning, she said: ‘As a representative of the Government I am waiting for the JCVI update on this which could be today but it is very imminent.

‘As I have already said I am not going to preempt a policy announcement.’

But Professor David Livermore, an infectious diseases expert at the University of East Anglia, has slammed the plans.

He told MailOnline: ‘Sixteen to 17-year-olds are at low risk of serious disease and, through exposure, are developing immunity anyway.

‘We do not know if vaccine-induced or infection-induced immunity will prove the longer lasting, and to the better contributor to herd immunity.

‘Given this I can see no good reason to prioritise vaccinating them.

‘Limited vaccine supplies would be far better used in countries and regions with large vulnerable elderly populations who presently remain unvaccinated — Australia, much of South East Asia and Latin America, as well as Africa.’

Some 223,755 under-18s have already been vaccinated in England because the jabs have been made available to young people living with adults vulnerable to the virus.

Britain’s medical regulator the MHRA has approved the Pfizer vaccine for all over-12s, and it is already been rolled out to this age group en masse in the US.