The police want powers to be able to enter homes and shut down parties and BBQs they deem unnecessary under lockdown laws.

The Police Federation, who represent rank and file officers, believe there is a technicality in the current measures that mean they cannot enter a private property to break up a house party, unless they are allowed in by the householders.

On Sunday, the chairman of the group John Apter said that increased numbers of  people are calling the police to report their neighbours for breaking social distancing rules.

In just the first week of lockdown in late March, Greater Manchester Police were called to 494 gatherings in just four days.

A Police Federation source, told The Telegraph: ‘We have asked they consider giving us powers around private gatherings or gatherings in a private dwelling.’

Police chat with passers by in St George’s Park, Bristol, as the UK continues in lockdown to help curb the spread of the coronavirus on Tuesday

‘Some officers are having to work round it using other legislation that wasn’t designed for it.’

It comes after police have been accused of being ‘overzealous’ and pursuing ‘over-enforcement’ – from banning shops selling Easter eggs to shaming walkers with drones.

Despite the clamour for new lockdown powers, they are very unlikely to be green-lit by Home Secretary Priti Patel.

A Home Office source told the newspaper: ‘It would be a really big step for policing in this country that is not needed at this point.

‘Also police can issue the fixed penalty notice as they travel to or from the party.’

Police have already been given some enforcement power by the Home Office to ensure the rules set down by Boris Johnson three weeks ago are being followed. 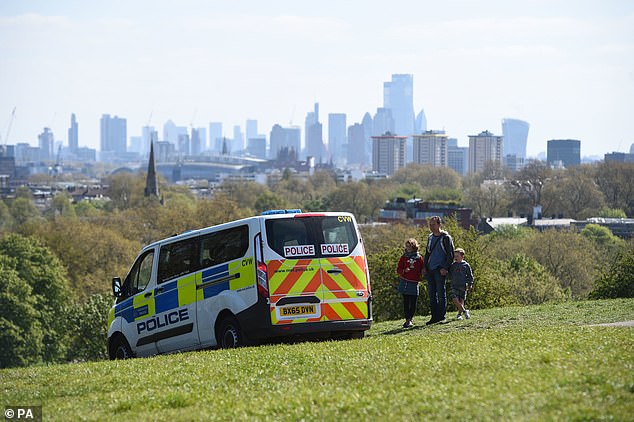 Police pass a family out walking on Primrose Hill, London, as the UK continues in lockdown to help curb the spread of the coronavirus on Tuesday

This includes breaking up gatherings of two or more people.  Those who refuse to comply could be issued with a fixed penalty notice of £60, which will be lowered to £30 if paid within 14 days.

Second-time offenders could be issued a fixed penalty notice of £120, doubling on each further repeat offence.

Those who do not pay the penalty can be taken to court, with magistrates able to impose fines up to £1,000 or more.

Just last week a survey revealed that a third of Britons think police have gone too far in their lockdown crackdown in the UK.

A YouGov poll commissioned by crime and justice consultancy Crest Advisory asked 1,646 adults between Friday and Sunday for their thoughts on how they view the police handling of the new laws and Government guidance to keep people indoors and protect against the spread of Covid-19. 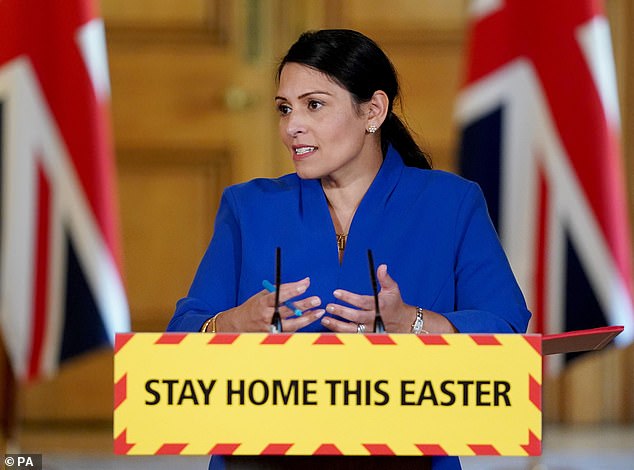 Despite the clamour for new lockdown powers, they are very unlikely to be green-lit by Home Secretary Priti Patel

The new research indicated 42 per cent of respondents fully support the approach taken by the police, but a further 32 per cent felt in some cases the police had gone too far.

Some 14 per cent of people who took part in the survey said the police should take tougher action, while 6 per cent felt the police approach to date had been too heavy handed.

Just 2 per cent of the public said the police should have no role in enforcing the lockdown.

Joe Caluori, head of policy at Crest Advisory, said: ‘This survey underlines the challenge police forces have in striking a balance between effective enforcement of the lockdown in order to support public health efforts to tackle Covid-19 and the need to maintain Britain’s model of policing by consent.’