First there was the Tupperware party, then came the Avon get-together and later, in some of the more daring households, the Ann Summers soiree.

But now there is a new bash where no one talks to each other and everyone stares at their laptops.

No, not an average night in homes up and down the country, but the Black Friday party, when friends meet up to bag the best online deals over a few glasses of prosecco and takeaway pizzas.

Since online giant Amazon helped introduce this very American event to Britain in 2010, Black Friday – which follows Thanksgiving Day in the US and marks the start of the Christmas shopping season – has become an important part of the retail calendar.

The Black Friday parties taking places across the nation will see friends meet up to bag the best online deals over a few glasses of prosecco and takeaway pizzas. (Stock image)

Bargain hunters are expected to part with £2.44 billion next Friday.

Over the whole weekend to so-called ‘Cyber Monday’, both online and traditional sales are forecast to reach a staggering £8.29 billion – six per cent up on last year’s £7.78 billion.

Marketing manager Tom Bourlet, 31, and his girlfriend Raquel, 29, who works in finance, are hosting a Black Friday party at their home in Brighton.

Mr Bourlet said: ‘There will be four to six of us, we’ll have prosecco in one hand and a laptop in the other – we might order some pizza. We’ll just listen to music and share some deals we find so we all get the best bargains.

‘We realised it was easier to get a group of us to spot all the best deals, plus it’s a fun way of hanging out together and having a few drinks while getting some bargains for Christmas.’

It is Mr Bourlet’s first event and he hopes to find a good deal on a vacuum cleaner and a backpack.

Mr Bourlet added: ‘I actually hated Black Friday in the beginning. I thought watching Americans charge into shops and hurting each other was sickening. 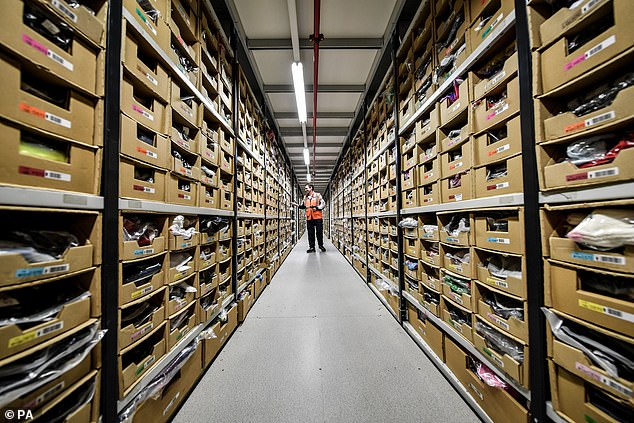 Bargain hunters are expected to part with £2.44 billion next Friday. Pictured: A worker picks clothing from thousands of clothing racks at Amazon’s fulfillment centre in Swansea, in the run up to Black Friday

‘But if companies want to offer 20 per cent discounts online, then I’m not complaining.’

Schoolgirl Evie Jones, 13, of London, is planning a Black Friday party with three friends after lessons on Friday. ‘I like a sale, but this year it just clicked that we could stay in and buy online,’ she said.

‘We don’t want to go out to a shop because it’s too hectic. This way we can all get together and advise each other about what we buy. They’re all bringing their laptops.

‘There will be little to no conversation but we’ll talk afterwards.’

Evie hopes to buy discounted clothes from Urban Outfitters and make-up from Superdrug.

‘Consumers are thinking they’ll wait and see what deals are on. It’s not just a one-day event any more. Multiple retailers are now starting early.’

Many retailers in Britain have jumped the gun and started slashing their prices last week in an attempt to lure consumers.

Supermarket Morrisons offered magnums of prosecco for £10 almost two weeks before Black Friday, while online retailer Not On The High Street is has slashed prices by up to 50 per cent on some items in the run-up to the big event.

However, some retailers are not joining the frenzy. Supermarket Asda, for instance, says it prefers to focus on lower prices all year round.

For those not caught up in the spending frenzy, or who have some money left over, there is Giving Tuesday on November 27.

The public is encouraged to donate, organise a bake sale, give unwanted clothes to local charities or raise money in other ways.

Last year about £225 million was raised globally in 24 hours.