‘Now for another miracle!’: Italian papers back Roma to produce another comeback

Liverpool may have a three-goal cushion going into their Champions League semi-final second leg with Roma… but the Italian papers have not given up hope just yet.

The morning after their side’s defeat at Anfield, the top sports publications on the continent were not weeping over defeat, but instead backing their side to produce yet another miracle comeback in Europe’s premier competition.

They came from three goals behind to beat Barcelona in the quarter-finals and two late goals on Tuesday did indeed give them hope of repeating the feat in Rome. 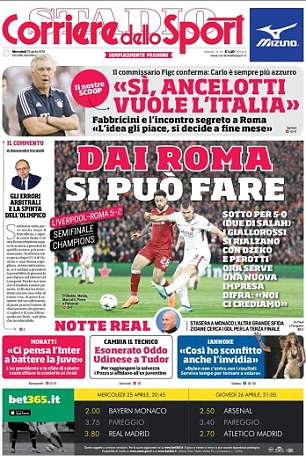 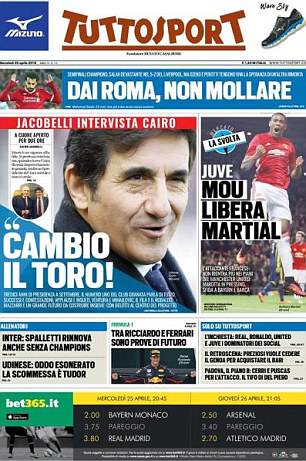 The front page of Gazzetta dello Sport led with the headline ‘Now for another miracle’, but did give some column inches to the player they called ‘the great ex’ – Mohamed Salah.

The Egyptian scored twice and produced two assists on another magical night at Anfield, and has since been labelled the most in-form player on the planet by some.

Tuttosport called his performance devastating, but instead opted to focus on their Serie A side, with the line: ‘Come on Roma, don’t give up’. 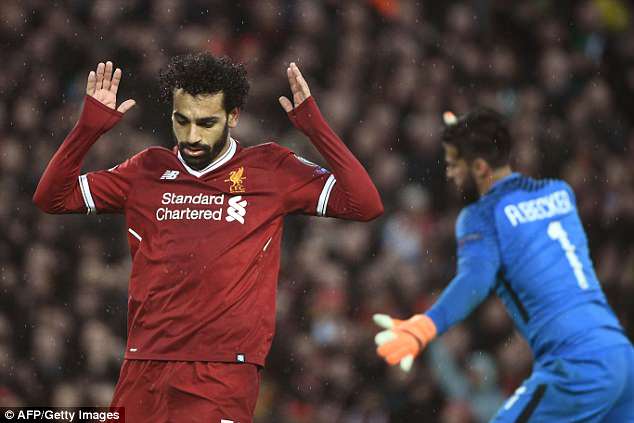 Corriere dello Sport, meanwhile, wrote: ‘Come on Roma, it can be done’, before going on to say that the ‘Giallorossi got back on their feet with Dzeko and Perotti’.

The pair scored late goals – the first after a momentary lapse of defensive concentration and the second from the penalty spot – to give Roma a faint hope of securing a place in the Champions League final.

Jurgen Klopp and his Liverpool side will still be huge favourites to progress though, with one away goal in Rome surely taking them out of touch in the last-four clash.