You know that the Hamptons are pretty exclusive when you find out that billionaire financier George Soros’s house isn’t even in the part known as Billionaire’s Row. In July and August, this part of New York state has the highest concentration of wealthy and beautiful people on the planet. However, the clever people are the ones who come just afterwards, because what remains is gorgeous.

Right now, you can walk for miles along deserted sandy beaches and find rates for hotels have plummeted like a stone. The black-windowed SUVs that clogged up the quaint lanes have headed back to Manhattan, the helicopters shuttling celebrities and magnates between their million-dollar homes have been grounded.

Long Island is a misnomer. It may be long, tapering to golden stranded perfection around Montauk, but it’s a peninsula, linked to Manhattan by trains and buses, with resonant names for the stops: East Hampton, Bridgehampton, Amagansett.

It’s gloriously expansive, a British-style landscape of trees, farms and windmills, but studded with perfect villages and vast mansions. The most expensive sandbar in the world is equal parts glossed-up mini-series and nostalgia – a world of lawn tennis and yacht clubs.

Southampton is so unlike its British namesake that it is faintly surreal. White Fences Inn lives up to the quintessential Hamptons in that it’s the sort of B&B that has its own swimming pool and the showers are powerful enough to pound you like a nor’easter.

But owners Liz and Eric are typical year-rounders in that they’re charming and hospitable, along with Bailey, their golden doodle dog who pads around the white-painted veranda. If rates here can top £807 a night in summer, they start at £202 in off-season.

After tea, with some home-made cappuccino shortbread, Liz takes us to her favourite beach. The houses on Meadows Lane have the Atlantic on one side and Shinnecock Bay on the other. Liz points out a vast glass and steel edifice. ‘That belongs to Calvin Klein. It cost £24million to buy, and £24million to tear down and rebuild.’

Rumour has it that there’s only one bedroom so that he doesn’t have to suffer messy house guests. She also points out Soros’s house, a more traditional set of buildings around the corner.

However, anyone can use the dune-clad beach, with its pleasing touch of wildness. It certainly doesn’t feel as if Manhattan is just 90 miles away. 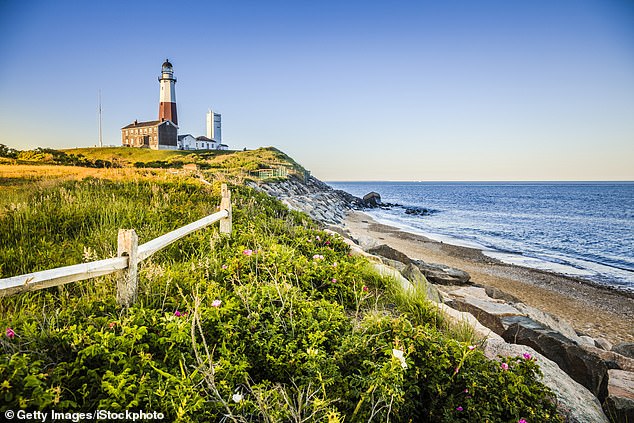 The Hamptons weren’t always like this. In the 1940s artists, including Jackson Pollock, came here in search of cheap spaces and found them in derelict barns.

As a tribute, the Parrish Art Museum, next to White Fences, has been built to resemble a barn, but the resemblance ends there. This lavishly endowed museum (parties in the Hamptons summer season largely revolve around charity fundraisers) is a 34,000 square foot temple to abstraction and pop art.

Sag Harbor has a special charm. It has a suitably quaint, coffee-shop-and-tree-lined Main Street, which leads down to the waterfront with lobster shacks and fish market. There’s a strong family feel here, with children wearing Little League baseball outfits, joining their parents to crowd into the Corner Bar for lobster rolls and pizza. Across the water, via a couple of ferries, is North Fork. If the Hamptons has the fame and the celebrity of Manhattan, North Fork is Long Island’s Brooklyn.

This was always the cheaper part of the coast but it’s infinitely cooler. And foodier.

We eat at the white-clapperboard North Fork Table and Inn. When it opened in 2005, it was a pioneer in farm-to-fork food but, according to long-term owner and chef Claudia Fleming, it’s so much easier these days.

‘We’ve started to get Wall Street people moving here and deciding to start farming,’ she says. ‘I’m not sure they’ll ever made a profit but we love that they do.’

She’s a beneficiary of several Wall Street mid-life crises, and so are we as we eat locally sourced duck confit, foie gras and fish.

Getting a table here in summer requires stamina; out-of-season is a much simpler process.

At Greenport, there’s a trendy new hotel, the Menhaden, named in an ironic-Brooklyn way after a particularly unattractive fish. The hotel, though, is a charmer, with 16 light-filled rooms and a roof terrace, and kitchens on each floor stocked with locally made treats – including jams, crisps and biscuits – so guests can help themselves.

Greenport, another small town on the North Fork branch of the Long Island Rail Road, bustles gently, with diners and bandstands, and yellow school buses revving back to life for a new term.

Just along the coast, Sound View is a former motel that’s been given more than just a nip and a tuck. Built on stilts, with steps down to the beach, the pine-clad cabins start at £163 a night out of season. 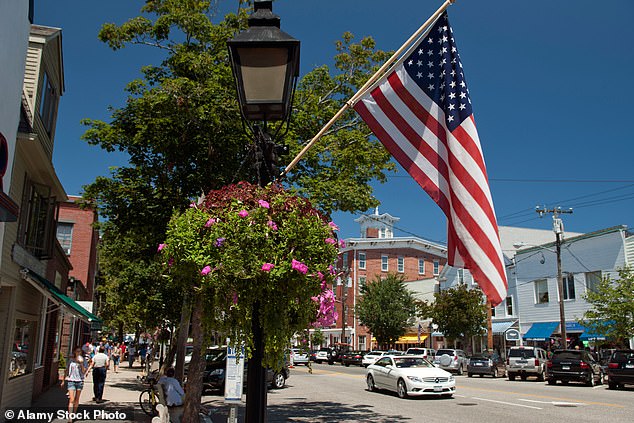 The hotel has Halyard, another of Long Island’s best restaurants, attached to it, a place to mix whipped ricotta cheese with swordfish tacos.

While we were chatting to the 30-year-old chef Stephan Bogardus, a middle-aged woman came into the restaurant. He broke off to give her a hug. ‘She was my grade-school head teacher,’ he says when he returns.

Increasingly, Long Island’s farms are becoming vineyards and not much of the produce makes it out of the state because it’s snapped up by locals and visitors.

In 2006, Michael Kontokosta gave up a life in corporate law to take on the family potato farm. Now, Kontokosta is one of the most stylish wineries going, with a collection of award-winning wines.

He isn’t in it for the money – there’s too much competition – but he’s much happier as a wine-maker than a lawyer. It’s a lifestyle thing, because he likes Long Island out of season.

And even at this time of year, you’ll still generally spot a celebrity or two who have similar ideas.

Paul McCartney has a place in Amagansett, and Alec Baldwin can often be seen, along with Brooke Shields.

Some of the Beautiful People can also be clever people, too.