Strawberry milkshake has been thrown over UKIP’s Carl Benjamin during an election rally in Salisbury today.

The UKIP European election candidate, who was slammed last month for releasing a video suggesting he ‘might’ rape Labour MP Jess Phillips, was targeted while he walked through the streets of Salisbury this afternoon.

The dousing was the fourth time protesters have aimed a milkshake at Mr Benjamin.

He was soaked with the drink while campaigning in Totnes, Devon, on Sunday, May 12, just two days after protesters tried to throw their drinks over him in Truro, Cornwall on Friday, May 10.

The candidate for South West England sparked fury last month over a tweet he sent to Jess Phillips, the MP for Birmingham Yardley, in 2016, saying ‘I wouldn’t even rape you’.

In a video posted on April 26 he added: ‘With enough pressure, I might cave.’

UKIP European election candidate Carl Benjamin, who was slammed last month for releasing a video suggesting he might rape Labour MP Jess Philips, was targeted while he walked through the streets of Salisbury this afternoon

After announcing a list of spoof UKIP policies, including invading Spain and restoring the British empire, he said: ‘There’s been an awful lot of talk about whether I would or wouldn’t rape Jess Phillips.

‘I’ve been in a lot of trouble for my hardline stance of not even raping her. I suppose with enough pressure I might cave. But let’s be honest, nobody’s got that much beer.’

It comes after a McDonalds in Edinburgh was ordered by police to stop the sale of their milkshakes in an effort to prevent further attacks.

It was feared protesters would throw the drink over Brexit Party leader Nigel Farage during yesterday’s elections rally in the city.

Printed signs saying ‘we will not be selling milkshakes or ice creams tonight. This is due to a police request given recent events’ were displayed on the fast-food chain’s windows. 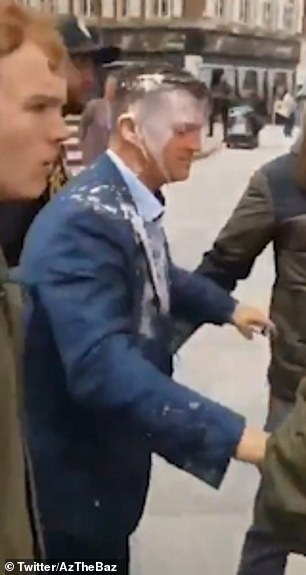 The tweet read: ‘Looks like UKIP European election candidate Carl Benjamin was the latest to get the milkshake treatment during a visit to Salisbury today.’

But reaction to the images was mixed as despite some praising the decision to throw the milkshake others said it was ‘thuggery’.

One tweet read: ‘Whoever threw the milkshake basically admitting they couldn’t out debate Carl Benjamin. How sad.’

While another tweet said: ‘Ukipper Carl Benjamin gets the milkshake he so richly deserves.’

Tommy Robinson has also had food and drinks thrown at him during the European election campaign.

Former English Defence League leader Mr Yaxley-Lennon was drenched by milkshakes twice in two days as he campaigned in the north-west of England.

The far right activist claimed ‘some Muslim supporter’ was behind the incident involving an unidentified assailant. Footage of the attack was widely shared online.

The second encounter took place as the far-right extremist was campaigning in Warrington, Cheshire and sparked a brawl after his blue striped suit was covered in the sticky McDonald’s drink.

In footage taken at the scene, Robinson – who is running as an independent to become an MEP for the North West – can be seen engaged in a discussion with an Asian man and appears to be referencing an earlier altercation in the town centre.

He can be heard telling the man that he was ‘overly aggressive’ and that ‘the only person you pushed was a woman.’ But just moments later, the 36-year-old is covered in milkshake before hurling several punches at the man responsible. 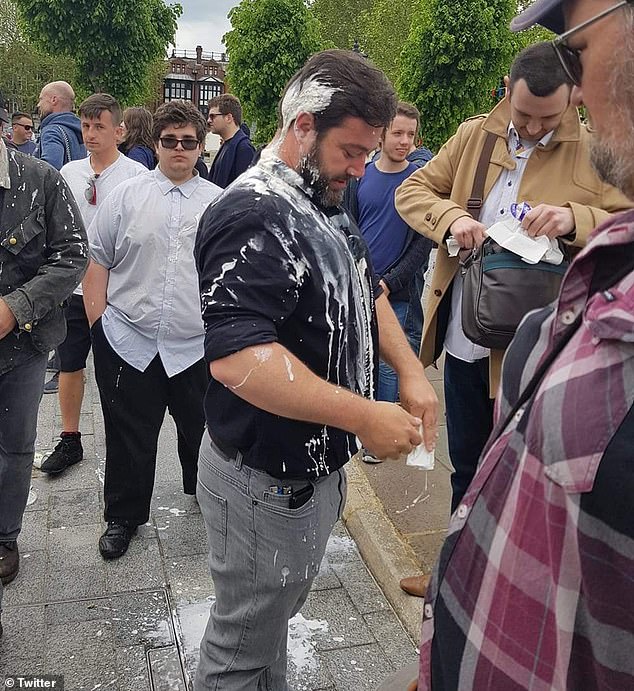 The Mirror quoted a man named Danny who claimed to have been responsible for throwing the milkshake.

‘The police took me away but they told me they weren’t going to do anything, they just wanted me out of that situation,’ he told the newspaper.

He told Asian Image: ‘He just kept talking to me. I kept moving location. I was the only Asian guy there.

‘I said to him I do not wish to speak to you on or off camera. I just got annoyed with him. A milkshake ‘slipped’ out of my hand.’

Mr Benjamin – who is currently being investigated by police about what he said were jokey rape comments made towards MP Jess Phillips – was at a public meeting in Cornwall last week when two protesters tried to throw a drink over him.