‘Now’s the time to revolt’: Row as vicars threaten to defy Justin Welby’s orders to shut over Easter

Church of England vicars have threatened to defy the Archbishop of Canterbury’s orders to shut over Easter – claiming ‘now is the time to revolt’.

Guidance issued by Justin Welby warned the clergy not to enter churches to film services or for solo prayer.

Mr Welby prerecorded his Easter services from his kitchen, while other vicars claimed they would be at their churches to celebrate on Sunday.

Many across the Church of England have become enraged by the rules as they go further than the government advice.

The government had made provisions for such activities, so people belonging to churches up and down the country were still able to attend virtual services.

Those defying the rules set out by Mr Welby last night claimed they were being threatened with disciplinary measures.

One vicar said ‘it was time to revolt’ and another claimed they had ‘been going to church since lockdown’.

They said they would continue to do so, adding they would be attending at 10.30am on Easter Sunday. 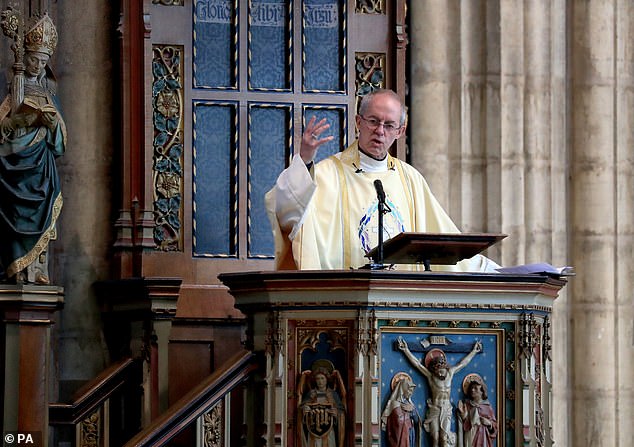 Rector at London’s St Luke’s Wimbledon Park Rev James Paice told the Telegraph: ‘If people can go to supermarkets and get food and stand less than two metres apart from others, then why can’t clergy go into an empty building on their own?

‘The advice that clergy should get shopping but not enter their buildings alone to minister online elevates the humanistic and practical above the spiritual.’

He added: ‘I’ve been going every Sunday to a room in my church. Ever since the lockdown I have been doing it, and I will do it at 10.30am on Easter Sunday. Other clergy are doing it from the main body of church.’

But most priests appear to be obeying the Archbishop as he calls for the first Easter without church services since 1213.

Some have used their initiative, including Mr Selby who recorded his service on his iPad from his kitchen. 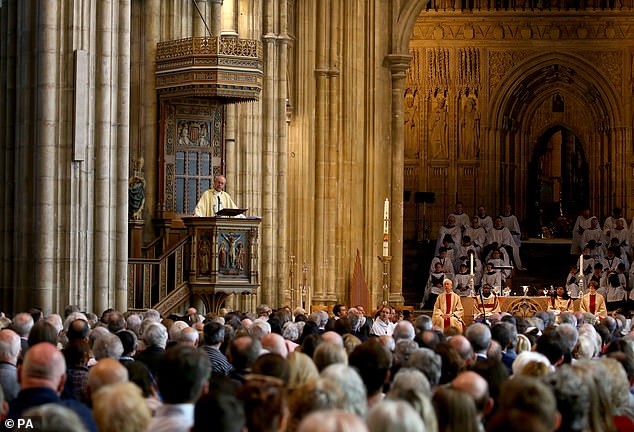 The Archbishop normally presides over a congregation of 1,500 people at Canterbury Cathedral on Easter morning (pictured in 2019)

He is set to call for ‘a resurrection of our common life’ during the sermon as well as hailing the courage of people working on the front line in response to the outbreak.

It is thought he will say: ‘After so much suffering, so much heroism from key workers and the NHS, we cannot be content to go back to what was before as if all is normal.

‘There needs to be a resurrection of our common life.’ He will also acknowledge the uncertainty society is currently facing.

‘So many people right across the country are anxious about employment, food, are isolated from loved ones and feel that the future looks dark,’ he will tell a virtual congregation.

‘People right across the globe feel the same uncertainty, fear, despair and isolation. But you are not alone.’

He will add: ‘In the resurrection of Jesus Christ, we have a hope that is surer than stone; than any architecture.

‘Even in the dark days of this Easter we can feed on hope. We can dream of what our country and our world will look like after the pandemic.’

The service will be broadcast live on BBC Radio 4 on Sunday and available to watch on the Church of England’s website and Facebook page from 9am.

The Archbishop will be joined in the virtual service by his wife Caroline, who will read from the Book of Acts.

Other pre-recorded elements of the service, which will feature hymns, include The Rt Rev Rose Hudson-Wilkin reading the Gospel and 10-year-old Theodore Levings, a member of All Saints Church in Canterbury, leading prayers.

The BBC service will finish with a national virtual congregation singing Thine Be The Glory, submitted by Radio 4 listeners in advance.

Churches across the country have been continuing to broadcast services digitally in the lead-up to Easter with more than 1,000 livestreams taking place on a regular basis.

The Palm Sunday service was the third to be broadcast on national Church of England channels since the suspension of public worship in church buildings due to the coronavirus outbreak.

A national service broadcast by the Archbishop of Canterbury last week which also featured on BBC Radio 4 and local radio stations, attracted around five million listeners and viewers.