Amid a new national debate over gun rights, the leader of America’s largest pro-Second Amendment group made an unscheduled speech Thursday at a giant convention of grassroots conservatives, arguing that the level of armed security applied to celebrities and banks should extend to schools.

The National Rifle Association’s Wayne LaPierre opened up the Conservative Political Action Conference Thursday blaming ‘school security, the failure of family, the failure of America’s mental health system, and even the unbelievable failure of the FBI, ‘ for last week’s school shooting in Parkland, Florida, which left 17 dead. 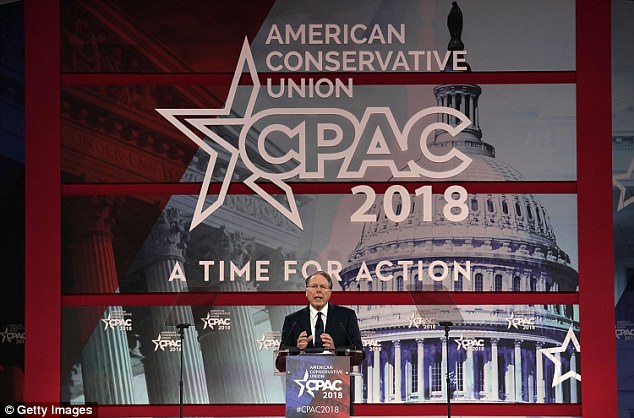 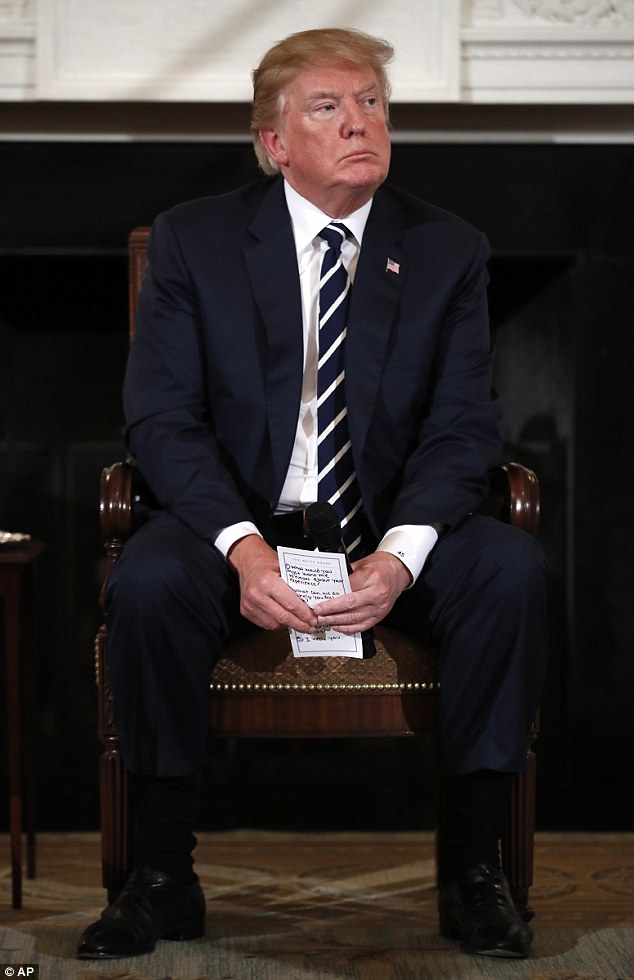 Wayne LaPierre’s speech came a day after President Trump invited victims of school shootings into the White House for a conversation. While suggesting he was open to some gun control measures, the president tweeted his support for the NRA Thursday morning 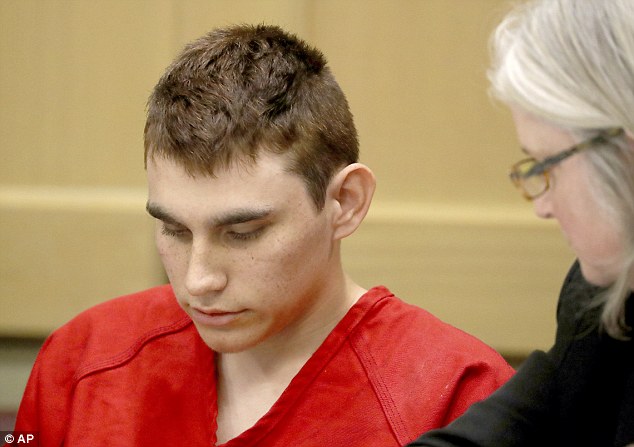 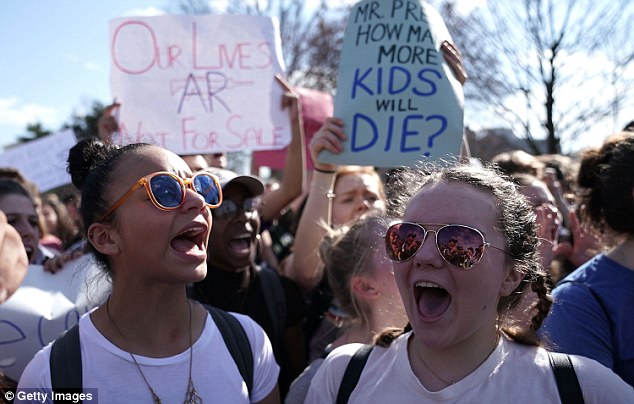 The most recent school shooting has invigorated student activists who want lawmakers to pass stricter gun laws. The National Rifle Association has stood in opposition to most of these measures

‘Does that make any sense to anybody?’ he asked the crowd. ‘Do we really love our money and our celebrities more than we love our children?’

While an appearance by LaPierre was expected during the three-day conference, held just outside of Washington, D.C., at Maryland’s National Harbor, he was left off the schedule in light of the recent school shooting, with organizers worried that his speech would attract protesters.

But it was clear when NRA spokeswoman Dana Loesch was introduced as the first big-name speaker, that LaPierre would soon follow.

‘We were all horrified by another terrible tragedy at an American school,’ LaPierre began. ‘Each and every member of the National Rifle Association mourns the loss of the innocent.’

He then delivered a 30-plus minute diatribe against the Democrats and the media to the crowd.

‘The opportunists wasted not one second to exploit tragedy for political gain,’ he said, suggesting the ‘breathless national media’ was eager to ‘smear’ the NRA.

‘For them it’s not a safety issue, it’s a political issue,’ he continued. ‘Their goal is to eliminate the Second Amendment and our firearms freedoms, so they can eradicate all individual freedoms.’

‘Their solution is to make you, all of you, less free,’ LaPierre said.

The NRA CEO spent a big chunk of his speech warning off socialism, suggesting that the modern-day Democratic Party was completely now in the Bernie Sanders’ mold.

‘Obama may be gone, but they’re Utopian dream, it marches on,’ LaPierre added.

It goes beyond Sanders, the Vermont independent who ran for president in 2016, losing to Hillary Clinton in the Democratic primary.

‘He’s near the end of his career,’ LaPierre said of the 76-year-old Sanders. ‘But how about Kamala Harris, Elizabeth Warren, Bill de Blasio, Andrew Cuomo, Cory Booker, Christopher Murphy and Keith Ellison?’

‘They are not Democrats in the mold of John F. Kennedy or Tip O’Neill,’ LaPierre said. ‘They hide behind labels like Democrat, left-wing and progressive to make their socialist agenda more palatable and that is terrifying.’

Following in the footsteps of Congressional Republicans, who have become more and more critical of the FBI, LaPierre blamed them too, while pointing out that many members of the NRA are in law enforcement.

That didn’t stop LaPierre – and Loesch – from saying the bureau dropped the ball.

‘I refuse to leave this stage until I say one more time that we must immediately harden our schools,’ La Pierre. ‘Every day young children are being dropped off at schools that are virtual wide-open soft targets for anyone bent on mass-murder.’

Before LaPierre spoke, Loesch brought fire to the stage – blasting the national media and agreeing that schools should be protected by deadly firepower.

‘We’re parents too,’ she said of NRA members. 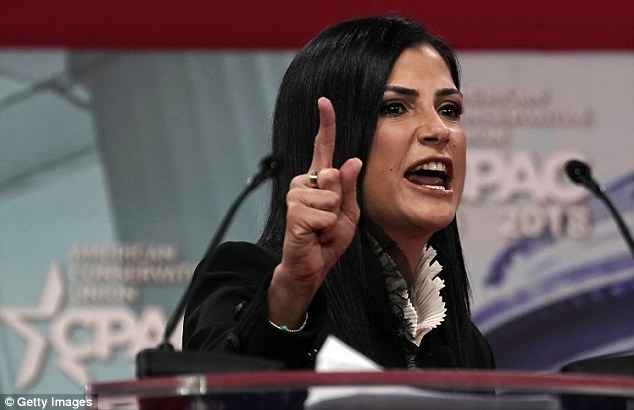 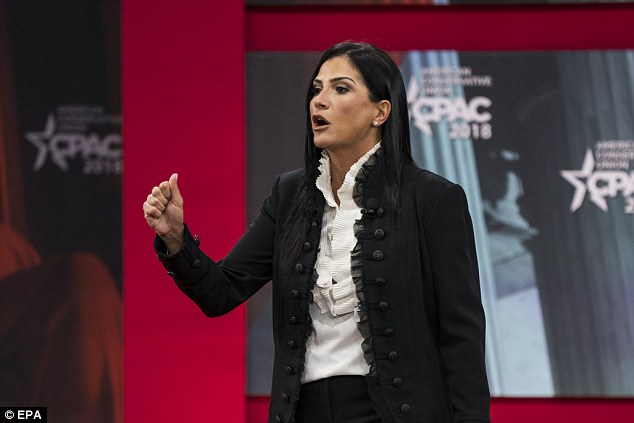 ‘But yet we leave them the most unprotected,’ Loesch lamented.

She opened her remarks by pointing to the back of a cavernous ballroom at reporters and television cameras – and claiming broadcasters crave the ratings that come along with massacres.

‘Many in legacy media love mass shootings. You guys love it!’ she said.

In her next breath, Loesch lambasted them for ignoring the plague of routine shootings in black-majority urban neighborhoods.

‘There are thousands of grieving black mothers in Chicago every weekend, and you don’t see CNN town halls for them, do you?’ she asked on Thursday.

Last Wednesday’s shooting at the Marjory Stoneman Douglas High School invigorated its students to become vocal in the Second Amendment debate, as busloads of teenagers have invaded the state’s capitol in Tallahassee with plans to march on Washington next month.

A number of students who survived the shooting, and parents of the deceased, gathered at the White House yesterday for a listening session with President Donald Trump.

Trump, most notably, pitched the ideas of arming teachers in the schools, an idea that was panned by a majority of his guests in the room.

He also said he would push for more comprehensive background checks, consider raising the age to buy firearms to 21,  and ban bump stocks, the devices that turned the Las Vegas gunman’s semi-automatic into a machine gun, increasing his killing power.

But the president also expressed his support for the NRA, who endorsed him in May 2016, as he was earning the Republican nomination.

‘What many people don’t understand, or don’t want to understand, is that Wayne, Chris and the folks who work so hard at the @NRA are Great People and Great American Patriots,’ Trump tweeted Thursday morning, before LaPierre’s speech.

‘They love our Country and will do the right thing. MAKE AMERICA GREAT AGAIN!’ the president wrote.

‘We have to harden our schools not soften them up,’ the president said, parroting the NRA head. ‘We have to get smart on gun-free zones,’ he added, repeating one of his own campaign trail talking points.

Trump also said the NRA was ready to make moves on guns.

‘I’m a believer, but I spoke to them, and they’re ready to do things they want to do things,’ the president said.