NRA files for bankruptcy and moves from New York to Texas

BREAKING NEWS: NRA files for bankruptcy and announces it’s ‘dumping’ New York to reincorporate in Texas where it has 400k members

The National Rifle Association has filed for bankruptcy and announced it is ‘dumping’ New York in favor of Texas where they have some 400,000 members.

The gun rights advocacy group announced on Friday that it has filed bankruptcy petitions in US court as part of a restructuring plan in a bid to cut its ties with New York.

The NRA said in a statement they were going to restructure as a Texas nonprofit to exit what it said was a ‘a corrupt political and regulatory environment in New York’ where it has been registered for 150 years.

It comes five months after New York Attorney General Letitia James tried to dissolve the NRA by filing a lawsuit accusing its leadership of taking $64 million dollars from the group for their own personal use. 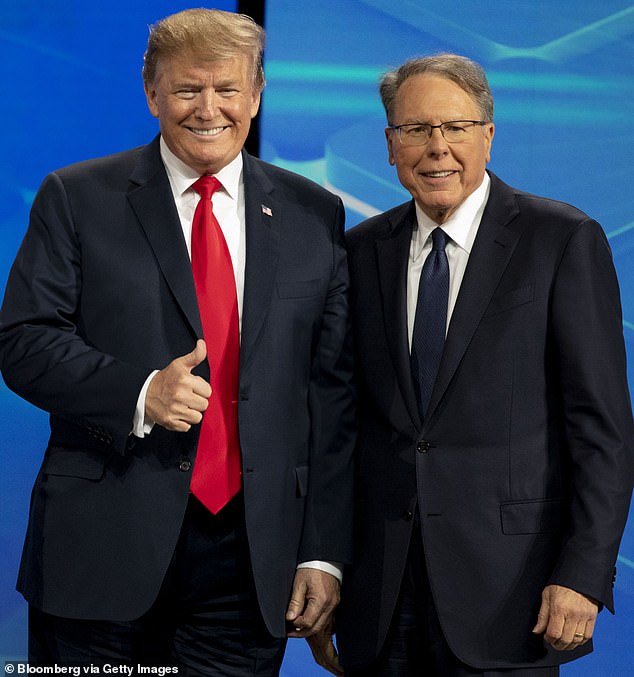 President Trump is pictured above with NRA CEO Wayne LaPierre back in 2019. Trump had urged the group back in August to move to Texas to avoid legal hassles

In a statement announcing the changes, NRA CEO Wayne LaPierre said the move to Texas and the bankruptcy filing was part of a strategic plan.

‘Obviously, an important part of this plan is ‘dumping New York’. The NRA is pursuing reincorporating in a state that values the contributions of the NRA, celebrates our law-abiding members and will join us as a partner in upholding constitutional freedom,’ LaPierre said.

‘This is a transformational moment in the history of the NRA.’

In the New York lawsuit filed last August, James accused LaPierre and three of his current or former top executives of using the organization as their ‘personal piggy bank’ for years.

She sought to have the organization dissolved over alleged self-dealing by top leaders of the group.

The NRA counter-sued James, alleging that her bombshell lawsuit ‘was a baseless, premeditated attack on our organization and the Second Amendment freedoms it fights to defend’.

‘I think the NRA should move to Texas and lead a very good and beautiful life,’ Trump said at the time.

James on Friday vowed to continue her legal fight against the NRA, saying in a statement: ‘The NRA’s claimed financial status has finally met its moral status: bankrupt. While we review this filing, we will not allow the NRA to use this or any other tactic to evade accountability and my office’s oversight.’