A woman has been filmed seemingly threatening to shoot a man after he asked her to wear a mask inside a grocery store.

In the video obtained by Perez Hilton, the woman dubbed ‘NRA Karen’ is seen at the cash register of a Stater Bros in Beaumont, California and the person filming tells her: ‘The state says you have to wear a mask.’

The woman responds by shooing him away.

‘Bye,’ she says twice with a wave. She then turned to the employee behind a sneeze screen at the cash register and says: ‘I have a mask but I’ll have an anxiety attack in two minutes so…’ 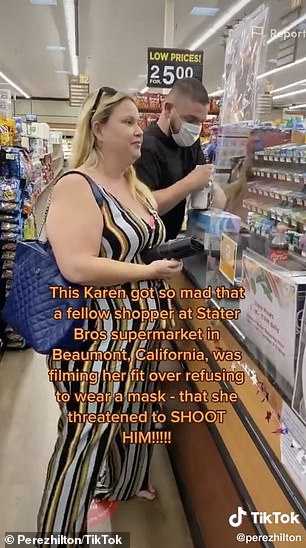 A woman dubbed ‘NRA Karen’ in a video obtained by Perez Hilton is seen at the cash register of a Stater Bros in Beaumont, California without a mask. When told by a fellow customer (not pictured) that the ‘state says you have to wear a mask’, she tells staff she has a mask but wearing one will give her an anxiety attack

The unidentified woman then leans toward the employee where there is no screen, and says: ‘I really will … I have a medical condition. I have a note.’

The person filming the clip continues his plea for her to wear the mask.

That’s when she looks directly at him and says: ‘You are not videotaping me because you will get shot outside in this parking lot.’

As she starts rummaging around in her bag, the shocked customer responds: ‘Oh.’

Another shopper and the employee – who is not visible on screen – do not respond to what is going on.

After the complaining shopper tells her he’s calling the police she says ‘go ahead’.

She then pulls out a mask and gives in: ‘I’ll put my mask on.’

The video cuts off with her using an expletive. 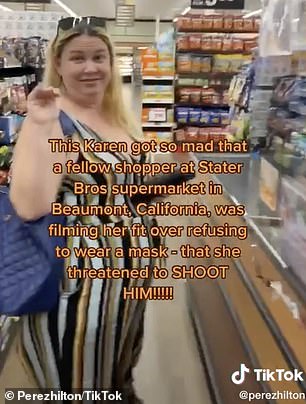 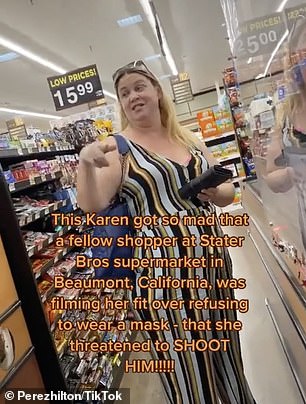 She adds to the employee that she has a medical condition and has a note, presumably from a medical professional explaining why she is exempt. Then she The woman says: ‘You are not videotaping me because you will get shot outside in this parking lot’ 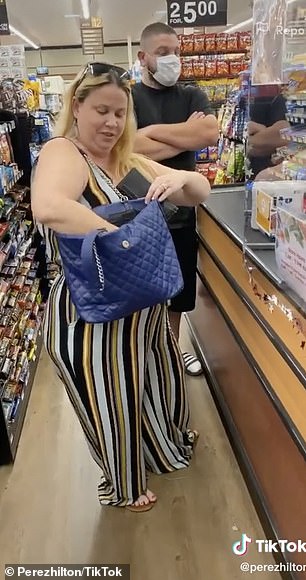 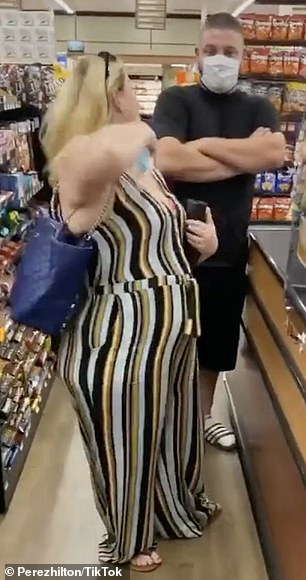 It’s unclear when the video was filmed but California issued a mask mandate in the middle of June.

It requires a face covering in public while waiting in a public line.

Exceptions are for children under two years old, anyone with respiratory issues where it would impede their breathing, anyone unable to remove the mask without help and anyone with a medical condition, mental health condition, or disability that does not allow them to wear a mask.

California recently surpassed New York as the state with the most cases of COVID-19. There were 427,261 cases compared to 414, 949 in New York on Thursday.

Despite Stater Bros putting up signs to wear masks, some social media users have complained that many branches are not enforcing the rule.

DailyMail.com has reached out to Stater Bros for comment. 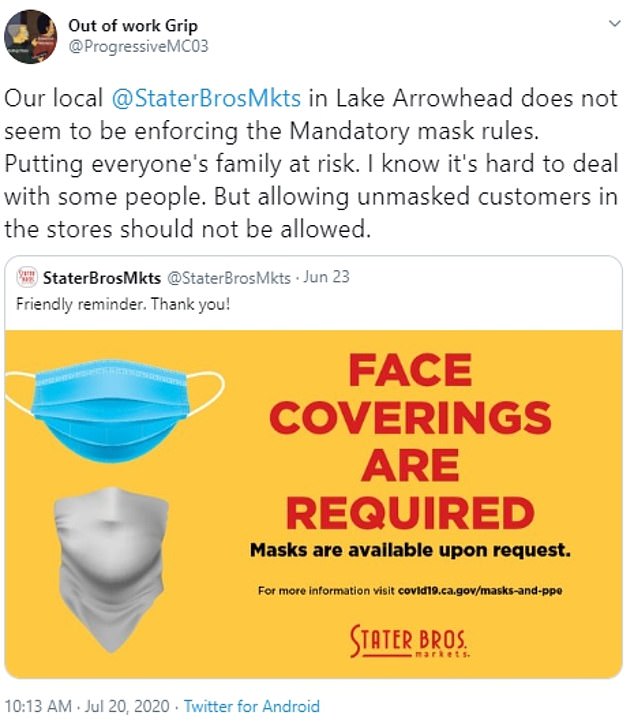 Despite Stater Bros putting up signs to wear masks, some social media users have complained that many branches are not enforcing the rule.