NRL confirms the rugby league season will start on May 28

The NRL will resume play on May 28 after getting the go-ahead to continue the season by the government, the league has announced.

ARL Commissioner Wayne Pearce confirmed that teams will begin training on May 4 before the season resumes on May 28.

He also confirmed that points earned in the first two rounds of the competition will remain.

Tui Kamikamica and Brenko Lee of the Melbourne Storm arrive to train in Melbourne, Wednesday, April 15, 2020 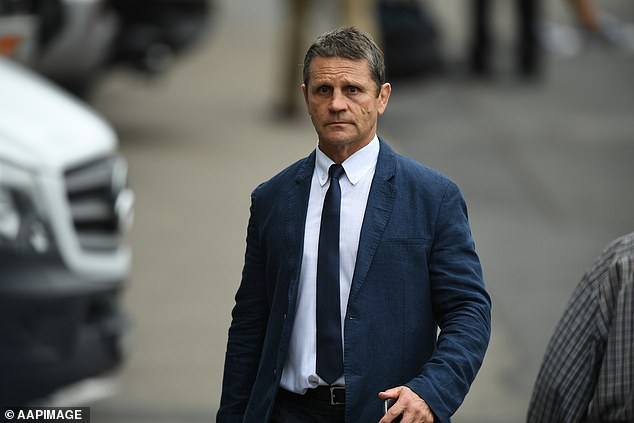 ‘What we achieved today was a lot more clarity around the medical process and what those protocols are,’ Pearce told NRL.com.

‘We clarified that May 28 is a definite and also confirmed that May 4 is the resumption date for training.

‘What was also confirmed that the competition points that had been earned in the first two rounds will carry over to the extended competition.

‘Everyone is supportive of what we’re doing. Everyone is unified into getting back on the field.

‘We feel like we owe it to not just the players and coaches but the thousands of staff members at various clubs and associated industries that are out on the unemployment lines too.’ 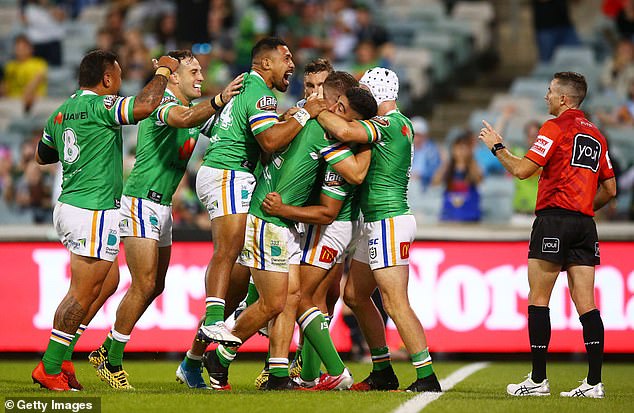 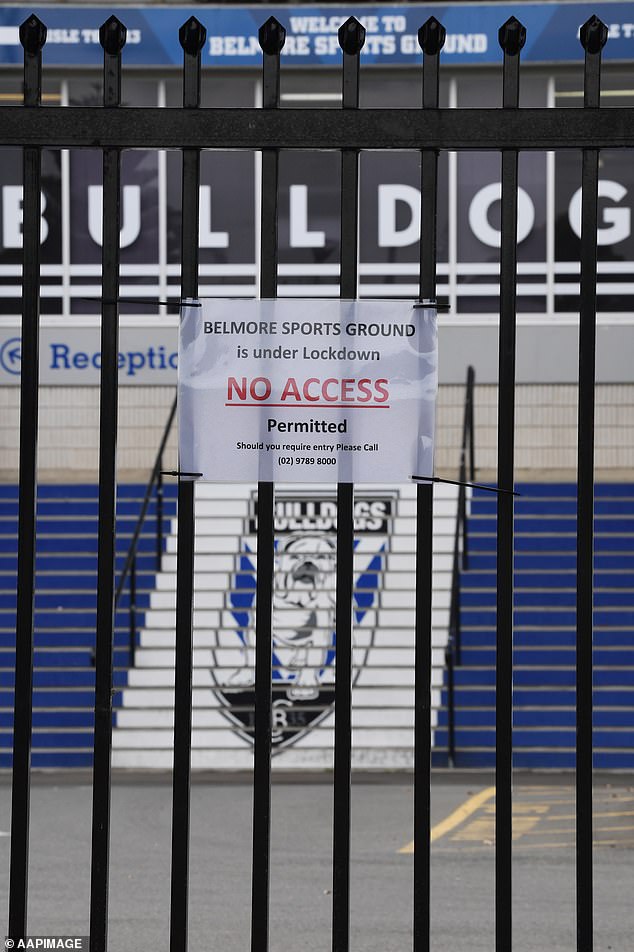 The Canterbury Bankstown Bulldogs NRL club in lock down following the cancellation of all NRL matches indefinitely, Sydney, Wednesday, March 25, 2020

Peter V’landys hopes a deal can be struck with broadcasters to unlock the details around the NRL’s return by the end of the week, but admits it will be a challenge.

Talks continued between the league and its TV partners are ongoing, as the game pushes towards its planned May 28 restart.

There is increased speculation those meetings could also prompt an extended TV rights deal, which would likely be worth less money than the current $1.8billion agreement.

V’landys told AAP earlier this month that he was open to the prospect of an extended TV deal being negotiated out of the coronavirus crisis.

Discussions over simulcast and exclusive games between the two networks are also expected to form part of discussions, as well as any changes to the weekend’s schedule.

‘We’re trying our best to finalise all the broadcast things this week, and that’s optimistic,’ V’landys told AAP.

‘Because they are very complicated. And you have two partners, not just one. And you’ve got to work between the two of them.

‘But they are certainly progressing. There are meetings every day. It’s not an easy progress. But we will get there.’

Any change in rights would ultimately affect the game’s bottom line, with the league already acknowledging they must reset their cost base.

Nine have been insistent on their position that clubs must be properly funded, with CEO Hugh Marks declaring the games tribalism its greatest strength this week.

Those discussions will also therefore impact on any changes to football department expenditure, and how clubs set themselves up for the future.

But more immediately, the game needs to reach a resolution for the structure of this season.

Both Nine and Foxtel will still have a key say in the structure of the season, as well as the new financial value of each round.

They will also have a preference on a grand final date, as well as whether State of Origin is played during or after the regular season.

‘The key stakeholder in regards to the competition structure are the broadcasters, so we are liaising with the broadcasters at the moment,’ Project Apollo leader Wayne Pearce said.

Pearce said there is still discussion around the structure of the competition, which is yet to be finalised with stakeholders.

Lockdown measures will ease across the Tasman next week, but the club are still yet to gain a travel exemption to arrive in Australia.

Players and staff are also likely to have to remain in quarantine for two weeks once landing, however there is some chance the NRL could push for them to be able to train.

Effectively that would be the only way the Warriors could resume training at the same time as other clubs.

‘We’re working through all those details, we haven’t finalised that yet,’ Pearce said.

‘We are working with the government authorities to get them over here, get them through a quarantine period and have them ready with the other teams for the start of the competition.’ 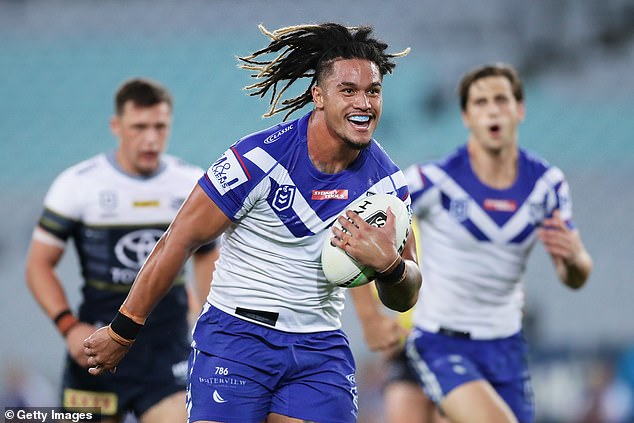 Renouf To’omaga of Canterbury Bulldogs playing against the North Queensland Cowboys at ANZ Stadium on March 19, 2020

Meanwhile, Pearce also revealed the NRL are hoping interstate players will not have to relocate and set up camp in NSW.

At this stage, none of the three Queensland-based clubs will be able to travel back and forth across the border while the Victorian government’s position is unclear.

‘As of today, those teams would have to come into camp in NSW,’ Pearce said.

‘But the landscape is changing pretty quickly. The government authorities are very supportive of what we are looking to do.

‘Because we actually are looking to hold ourselves to a very high standard. It will certainly exceed what community expectations are.’ 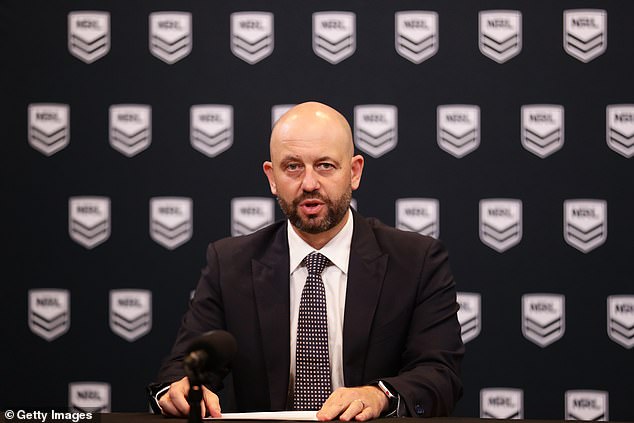 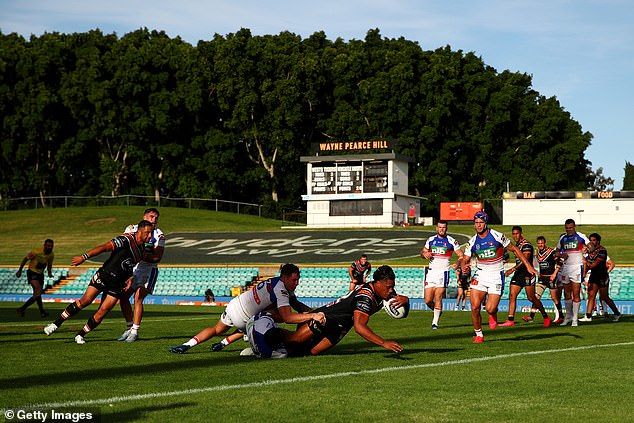 His exit was not about cost saving, but rather a ‘mutual agreement’ after ‘reflecting on the needs of the game’ according to an NRL statement.

He will be replaced by chief commercial officer Andrew Abdo in the interim, with the South African-born executive a chance to become the NRL’s fourth boss in eight years.

Pressure on Greenberg only grew last week NRL TV rights holder Channel Nine hit out at ‘mismanagement of the code’ in recent years, in a bombshell statement.

‘At Nine we had hoped to work with the NRL on a solution to the issues facing rugby league in 2020, brought on so starkly by COVID-19,’ the statement began.

‘But this health crisis in our community has highlighted the mismanagement of the code over many years. Nine has invested hundreds of millions in this game over decades and we now find they have profoundly wasted those funds with very little to fall back on to support the clubs, the players and supporters.

‘It has been my great honour and privilege to be the CEO of the NRL for the last 4 years. Despite the variety of challenges and pressures I have loved every single minute of the journey. Our growth over the last 4 years has been extraordinary & I am very proud of my contribution to the game.

‘I am indebted to the game for the variety of opportunities and experiences that have been provided to my family and I, and we leave with many great memories and life long friendships.

‘My sincere thanks to all the stakeholders across the game, particularly the fans who are the lifeblood of rugby league. Their unwavering passion for the game is wonderful.

‘I remain in awe of the players skill and bravery to play this game week in and week out & I thank all of them, both past and present for their friendship and support.

‘My thanks also to the staff and Executive team at the NRL. It has been an absolute honour to lead this team of talented, resilient and hard working professionals.’