Footy fans are finally given the green light to watch NRL games live at stadiums in NSW with crowds of up to 10,000 people

NRL fans in NSW have been officially given the green light to return in round eight after the state’s stadiums were given permission to operate at 25 per cent capacity.

NSW Premier Gladys Berejiklian on Sunday confirmed the state’s sporting venues will be allowed to operate with a quarter of the capacity occupied from July 1.

The announcement comes just days after the federal government ticked off on crowds of up to 10,000 people social distancing in stadiums.

‘If there is any outside organised event outside with ticketing and seating, up to 25 per cent capacity of that venue can be utilised for an event,’ Berejiklian said.

A Knights fan supports during the round five NRL match between the Newcastle Knights and the Melbourne Storm at Central Coast Stadium on June 13, as coronavirus restrictions ease

‘It can be a concert, a music event, a sporting event.

Social distancing seating is expected to take place, along with a range of other health protocols the NRL will have to adhere to.

Only stadiums with a maximum 40,000 capacity have been allowed to open, meaning ANZ Stadium remains unavailable. 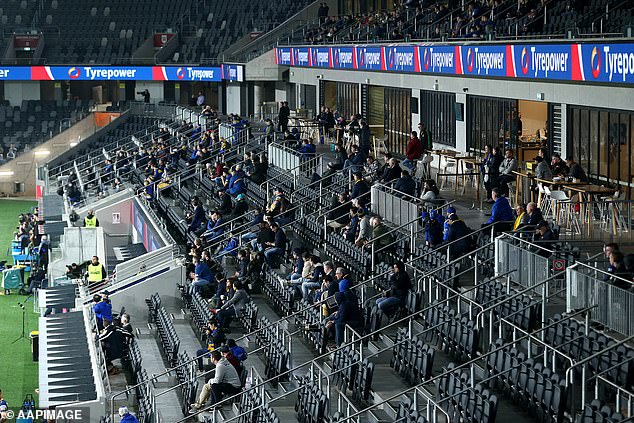 Spectators look on while social distancing during the Round 5 NRL match between the Parramatta Eels and Penrith Panthers at Bankwest Stadium in Sydney, Friday, June 12

The Sydney Olympic Park site remains unoccupied, with the lease of former tenants South Sydney and Canterbury expiring this month.

Both clubs are in talks about a return to the venue after the state government’s decision to backflip on plans to renovate the stadium this year.

‘The health advice was that no matter how well organised an event is, no matter how well it’s ticketed and seated and entry and exit points are considered, it would be extremely difficult to manage an event of more than 10,000 people at this time, which is why that limit was applied,’ Berejiklian said.

Queensland chief medical officer Jeanette Young is confident the state government will allow fans back into their venues. 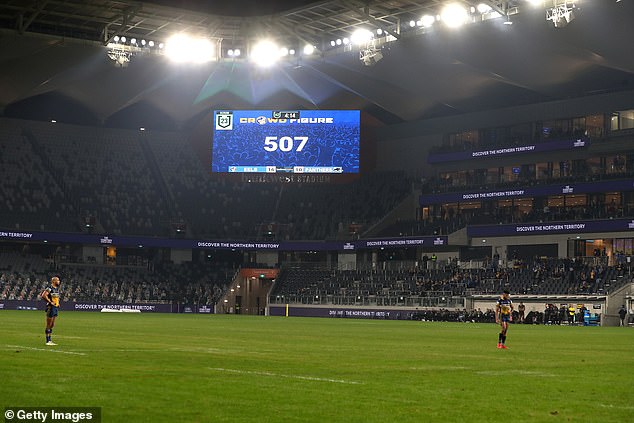 ‘I don’t know about next weekend but I think it’ll be reasonably soon that we should be able to see a return to spectators in our stadiums,’ Young said.

‘That work’s happening as we speak.’

It remains unclear whether the Victorian government will open the gates at their sporting venues, including AAMI Park.

Melbourne host defending premiers the Sydney Roosters in the opening match of round eight on July 2.

The NRL is being played in a limited number of grounds until round nine.

That means fans of Canberra, Manly, Gold Coast and the Warriors are likely to have to travel to watch their teams play ‘home’ games that week.

ARL Commission chairman Peter V’landys has identified August 1 as his next goal to remove any limitation on crowd numbers.

WHAT 25 PER CENT CAPACITY LOOKS LIKE AT NRL STADIUMS