The Tigers, who are the only team in the NRL not to win after three rounds, had a golden opportunity to run over the top of Nathan Brown’s side when winger Marcelo Montoya was sin-binned with 12 minutes remaining at Campbelltown Stadium.

Trailing 16-12, it was a perfect chance for Tigers playmaker Brooks to ice the contest.

He failed to do so, and Cronk – who won four NRL premierships in a glittering career with the Storm and Roosters – was scathing in his assessment.

Speaking on Fox Sports’ NRL 360 on Monday night, Cronk said Brooks had to deliver a clutch play at the death. 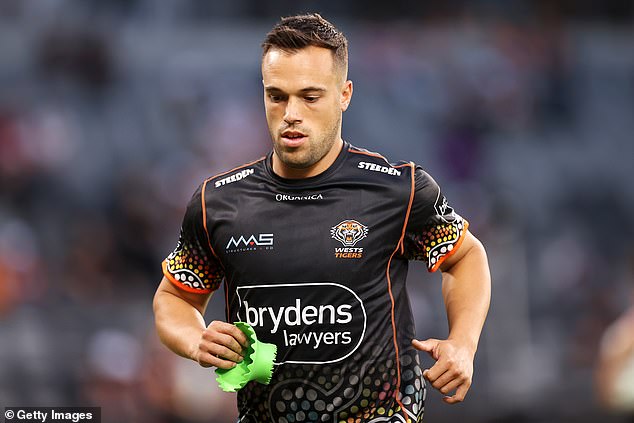 The Tigers, led by halfback Brooks, had a golden opportunity to run over the top of Nathan Brown’s team when winger Marcelo Montoya was sin-binned with 12 minutes remaining at Campbelltown Stadium 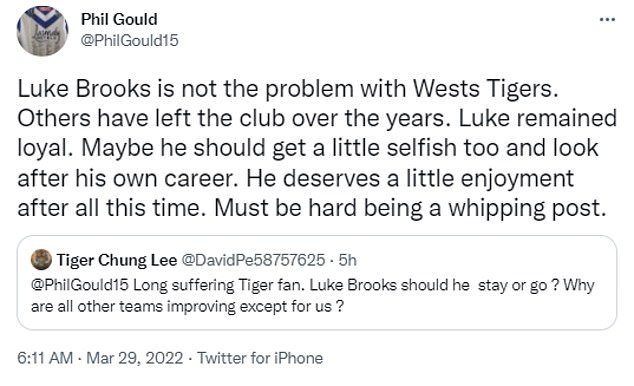 ‘Footy sense and footy IQ has to come into it,’ Cronk said.

‘When Montoya went to the bin, the Tigers had multiple shots to their left (side) — it’s the wrong side of the field… Luke Brooks needs to takes ownership of that.’

Cronk stressed that Wests should have kept going to the left-hand side of the Warriors’ line  where Montoya usually defends – until they beat the defence.

Instead, the Tigers only went in that direction twice despite having 17 shots at attacking the Kiwis’ line.

Responding to a question online from one of his Twitter followers, the Canterbury Bulldogs General Manager of Football tweeted his belief that the playmaker is not the problem.

‘Others have left over the years. Luke remained loyal. Maybe he should get a little selfish too and look after his own career,’ Gould said.

‘He deserves a little enjoyment after all this time. Must be hard being a whipping post.’

The Tigers travel to the Gold Coast to take on the Titans this Thursday night.

A fourth successive defeat will heap even more pressure on Brooks and coach Michael Maguire.