NRL: Kevin Walters LOSES it with the Broncos after they were hammered by Parramatta

Kevin Walters LOSES it with the Broncos: Coach goes off after Brisbane suffer ANOTHER embarrassing defeat with finals footy slipping away from his ‘broken’ side

Brisbane’s season is at risk of being in tatters and the desperation of the situation has not escaped Kevin Walters’, who completely lost it with his team in the sheds after they suffered another hammering on Friday.

Having been thumped 60-12 by Melbourne on home turf last week, the Broncos returned to Suncorp Stadium looking to redeem themselves against a Parra side bidding to seal their place in top four and a home semi final.

However, it was more of the same for Walters’ side who had no answer for the electric Eels across a drab 80 minutes of footy.

“I thought it was a gee-up… It’s unfathomable!” 😳 Fatty did not hold back on his assessment of Brisbane as vision emerged of Kevin Walters LOSING it in the sheds. 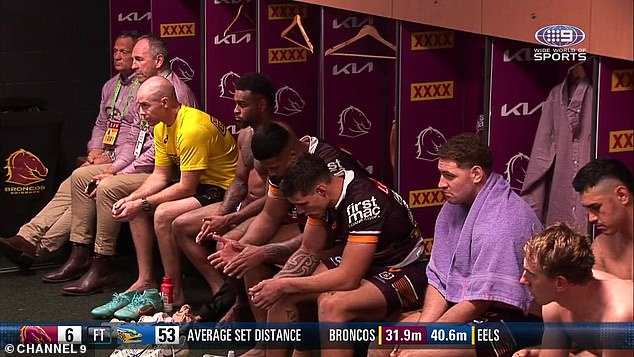 Worse still, star man Adam Reynolds was withdrawn midway through the first half after failing a HIA in a night to forget, whose for and against took a hammering in a huge boost for ninth-placed Canberra.

And after their shellacking, Walters was unable to contain his rage with his troops, with Channel 9 showing the coach’s emotions boiling over during a dressing down in the sheds.

Walters can be seen pacing the room pointing his finger in the direction of various players. 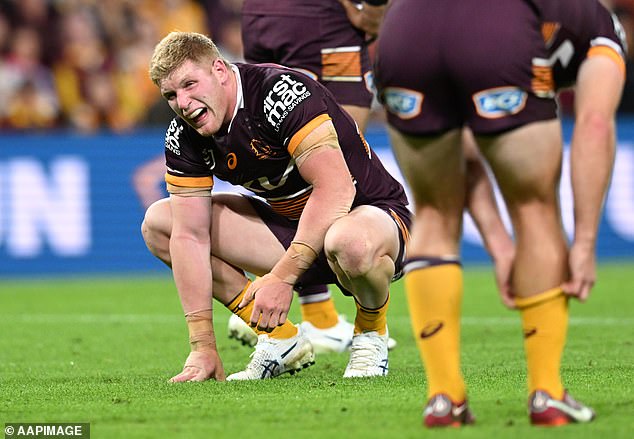 The Broncos are desperate to instill the urgency that saw them occupy a top four spot just six weeks ago, with their defence all at sea having conceded over 100 points in the past two games.

The door is now open for the Raiders, in ninth on 26 points and with a -25 points difference, to move into the top eight with a win over Manly on Saturday.

Nine analyst Paul Vautin described the Broncos as a ‘broken’ side heading into next week’s game against the Dragons in Sydney.

‘We just need to fix our defence more than anything and our attitude hasn’t been where it needs to be at this time of the year to compete against good sides.’