An NRL player who was investigated over the leaking of a series of sex tapes has claimed he became involved in the scandal due to a ‘misunderstanding’.

Penrith Panthers star Tyrone May was charged with allegedly filming and disseminating sexual acts with two women without their consent. He has also been stood down by the NRL.

May denies any wrongdoing and has been granted bail.

Former Panthers player Corey Harawira-Naera was questioned by the league as part of its investigation into the series of sex tapes allegedly involving May and other Penrith players, including Tyrone Phillips and Liam Coleman. 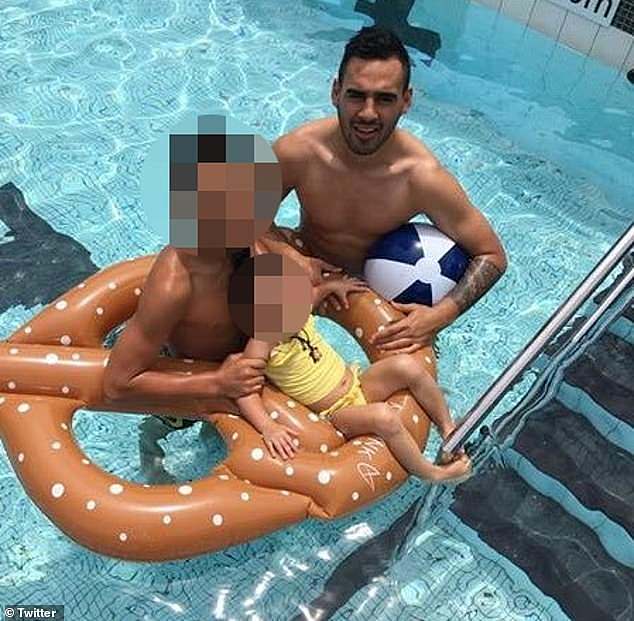 Harawira-Naera – who now plays for the Canterbury Bulldogs – said he had been cleared of any wrongdoing after speaking with the NRL integrity unit.

‘It was a misunderstanding between me and the boys,’ he told the Sydney Morning Herald.

‘They tipped me up that I might have a talk to (the NRL) because I was in a group that had seen those kind of videos.’

Harawira-Naera said his name had been mentioned ‘in the media’ and his family were concerned that he was involved.

The player said he felt bad for May after his arrest.

‘To see some of my close mates go through stuff like that – obviously the media bagging [May] and social media as well – it’s hard to see your mate cop that,’ he said.

Harawira-Naera said he had been in contact with May and other players to offer his support.

‘I told them if they needed a chat or anything I’m always here, even though I’m at a different club, we’re still good mates,’ he said.

May was charged after he allegedly filmed a sexual act with a woman at Coffs Harbour in February 2018. May denies the charges. 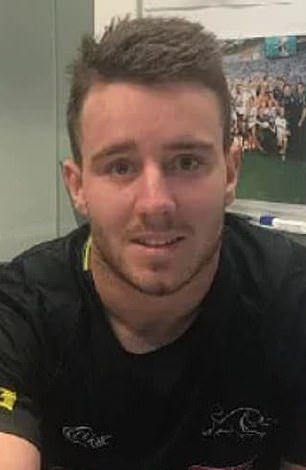 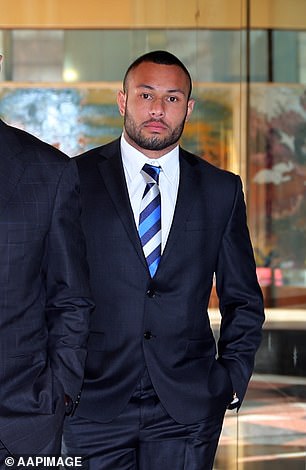 Police have further alleged that May filmed a sexual act with another woman at Kingswood in May 2018.

Police have been told that the sexual acts were consensual but the women were unaware they were being filmed.

The women became aware of the existence of the videos after they were leaked on social media.

May was granted conditional bail and is due to appear before Penrith Local Court on May 1.

The Panthers believe the videos were leaked by a player at another NRL club. 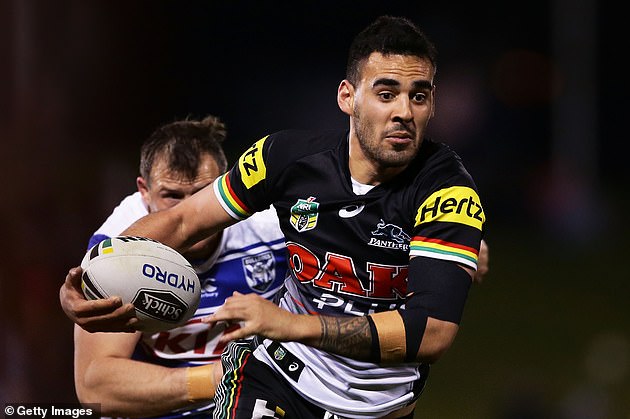 The videos, one eight seconds long and one 12 seconds, allegedly show the 22-year-old Penrith Panthers player alongside two women and another man.

May’s face is not visible in the footage taken nine months ago but it is understood that NRL investigators identified him from a distinctive tattoo on his arm.

In one video a man can reportedly be heard swearing at a woman, demanding she perform a sex act on another man and calling her a ‘f*****g ratbag’.

Two other Panthers players – Phillips and Coleman – have also been caught up in a sex tape scandal.

The Penrith Panthers club released a statement confirming they are investigating the video allegedly involving Phillips and Coleman, as the club goes into damage control.

September 4 – Pictures are published of Canterbury players dancing nude during their Mad Monday celebrations. The club was fined $250,000 and Adam Elliott and Asipeli Fine both pleaded guilty to wilful and obscene exposure.

September 30 – Jarryd Hayne is alleged to have sexually assaulted a woman after travelling to her home in the Hunter region on NRL grand final night. He has been charged with aggravated sexual assault and has pleaded not guilty.

October 1 – South Sydney’s Greg Inglis is charged with speeding and drink-driving while returning from an indigenous tournament in Dubbo. He was stripped of the Australian captaincy by coach Mal Meninga and handed an 18-month good behaviour bond.

October 13 – Parramatta’s Jaeman Salmon is charged with drink driving after a traffic accident in which he flipped his car and hit three parked vehicles. He was convicted and disqualified from driving for six months. He has also been stood down from round one and fined $10,000.

November 24 – Wests Tigers’ Zane Musgrove and Penrith’s Liam Coleman are involved in an alleged incident at a Coogee hotel. The pair have pleaded not guilty to indecently assaulting a 22-year-old woman.

December 2 – Newcastle prop Jacob Saifiti suffers a broken leg after being knocked out in a fight outside a pub. He was not charged by police but is fined $25,000.

December 6 – Dylan Walker is charged with common assault following an alleged domestic violence incident at his Dee Why home. He has pleaded not guilty. His partner has retracted her original statements made to police in which she claimed he pulled her hair, causing her to fall.

December 13 – Jack de Belin is charged with the aggravated sexual assault of a 19-year-old woman. He has pleaded not guilty.

December 21 – Six Cronulla lower-grade players are involved in a scuffle at the Cronulla Sailing Club. The bar banned the entire Sharks playing group. The six players were all fined.

December 25 – Brisbane’s Myles Taueli shatters a man’s jaw with a coward punch only weeks after being drafted into the Broncos’ top 30 squad. He has been convicted of assault, jailed for two years and had his Broncos contract torn up.

December 26 – Newcastle’s Tautau Moga allegedly slaps a taxi driver. He has been charged with common assault and will appear in court on March 21.

December 30 – Wests Tigers utility Michael Chee Kam is alleged to have punched a ride share driver. He has been charged with common assault.

January 7 – Scott Bolton pleads guilty to common assault after grabbing a woman’s upper thigh at a Sydney bar. He was given a 12-month good behaviour bond.

January 11 – The first of three lewd videos involving Dylan Napa emerge on the internet, all of which show the Queensland prop engaging in a sexual act.

January 15 – A video emerges of Corey Norman watching on as a man snorts a white substance off a plate. Norman was sanctioned by the NRL for the video in 2016.

February 1 – Ben Barba is sacked by North Queensland after the club views CCTV of an alleged domestic incident at a Townsville casino. He has been handed a life ban by the NRL.

February 20 – Brisbane’s Haas is stood down for four games and fined $20,000 for failing to comply with an integrity unit investigation.