NRL star Dylan Walker has vowed to get his life back on track after pleading guilty to assault on Friday.

The Manly centre, 26, escaped without a conviction after admitting he shoved a stranger in a drunken altercation late last year.

‘I’ve got people that look towards me and I’ve just got to make better decisions,’ he said outside Sydney’s Downing Centre Local Court.

‘It’s an opportunity for me to be a better person, a better role model, better father, son and uncle.’

The matter will now fall to the NRL’s integrity unit, with no rush for them to determine a penalty given he is still sidelined with a hamstring injury.

Off-contract at the end of this year, Walker has been told by coach Des Hasler he still wants him at the Sea Eagles but knows that future is still far from secure.

Walker was impassive in court as magistrate Vivien Swain on Friday described his assault as a ‘frightening scene’.

The victim had come to his sister’s aid when Walker tried to get in her car outside a pizza restaurant on Sydney’s northern beaches.

The victim then offered to help Walker find some alternative transport.

But in an ‘unnecessary confrontation’, Walker got closer to him then pushed him in the chest, causing him to fall over.

Walker had been set to fight the charges in a two-day trial starting on Friday but offered to plead guilty on Thursday in exchange for prosecutors dropping another assault charge.

The four-time Kangaroos Test player was so drunk at the time of the assault that he only remembers it by looking at video of the incident, the court heard.

Another assault charge was withdrawn.

Walker’s lawyer, Richard Pontello SC, asked for the court to take into account his client’s ‘background of childhood deprivation” when sentencing him.

But the magistrate found Walker was of good character.

He regularly feeds the homeless and is a loving father to his two young children, his lawyer Richard Pontello SC submitted.

He has good prospects of rehabilitation as well and had demonstrated remorse, Ms Swain said. 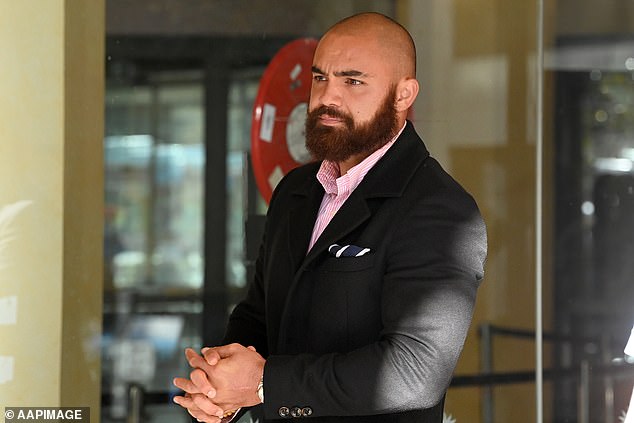 While the assault was in the lower range of seriousness it would have been ‘very frightening’ for the victim, the magistrate said.

She decided not to convict Walker.

But she imposed conditions for 18 months, including that he is required to stay out of legal trouble and receive treatment.

‘I just want to let people know that there’s an avenue to be a better person and seek help,’ Walker told reporters.

He said he had apologised to his victim, who was not injured in the assault.

The former South Sydney Rabbitoh was stood down in early 2019 as he fought the accusation he’d assaulted his fiancee, Alexandra Ivkovic, in December 2018.

In that incident, Ms Ivkovic called triple zero and accused the NRL player of pulling her hair and causing her to fall as she held a baby.

She recanted the story later that night, saying she’d overreacted.

Walker returned to the field after being found not guilty by a magistrate in May 2019.