NRL star who made sex tapes without women’s consent apologises

NRL star Tyrone May has given a tearful apology after avoiding jail for making sex tapes without the consent of the women he filmed.

The 24-year-old Penrith Panthers utility was given a three-year good behaviour bond and ordered to do 300 hours of community service for filming four intimate videos in 2018.

Charges over the distribution of the videos, which were leaked to media in March 2019, were dropped.

May was reduced to tears speaking about the scandal on Wednesday.

‘For (my little sister) to realise her brother is on TV for what I was on for, that hurt a lot,’ he told 7News.

‘If I was the father of a girl and that happened to my daughter I’d be pretty filthy, so I’m honestly sorry.

‘I didn’t realise how much drama and trouble I could cause. Once it’s on the internet, it doesn’t go away.’

Agreed facts tendered to court revealed two of the sex tapes were involved a woman who joined May, former Penrith reserve-grade player and another man in a Sydney apartment.

When the video was circulated on social media the woman contacted police before a second clip from the same night also surfaced online.

‘Once again, the complainant did not consent to the recording being made,’ the agreed facts state.

May said he woke up from a mid-afternoon nap in March of 2019 when he received a phone call about the leaked tapes.

He was arrested two days later, before another two videos were leaked online. 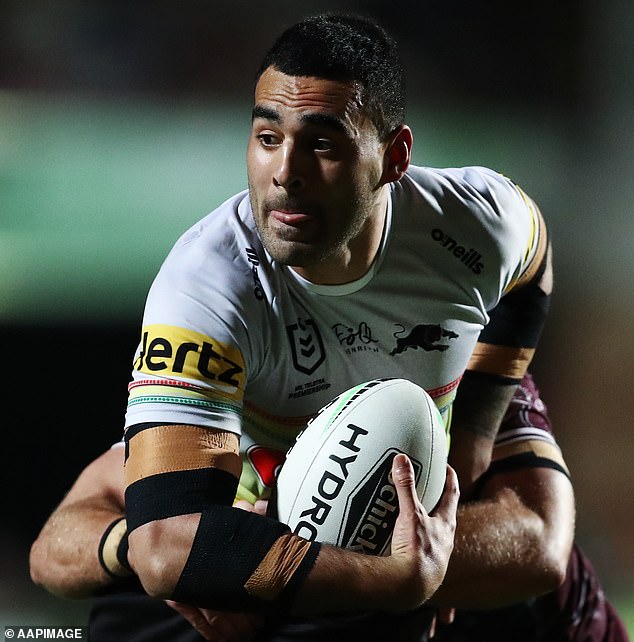 A woman came forward and identified herself in the last two videos which were recorded at the Best Western motel in Coffs Harbour in February 2018.

May pleaded guilty to four counts of intentionally recording an intimate image without consent but was spared jail.

The football star is fulfilling his community service as a groundskeeper at a local dog park.

Magistrate Denes lectured May about consent in the ‘Me Too’ era and said his lack of remorse almost landed him in jail.

‘It makes it really simple – If you don’t know they are going to consent, why would you assume they do consent?’ Ms Denes said.

‘Do you just assume people want milk and sugar with their tea? No, you ask.’