An experienced doctor has laid bare the shocking emergency room crises in Australia as ambulances queue outside hospitals and desperate patients go untreated in waiting areas.

Emergency medicine specialist Dr James Tadros told a NSW parliamentary inquiry this week he can’t remember a shift in three years where patient care hasn’t been compromised because of overcrowding and understaffing.

Dr Tadros read aloud texts he sent to a colleague about an 88-year-old woman with kidney failure who had been in the waiting room for six hours and was so weak she was ‘lying across three chairs’.

‘Some bystanders were helping her daughter to slowly move her around because she was so weak. This is basically Third World,’ one message read, reports The Sydney Morning Herald.

He told the colleague, Dr Pramod Chandru, that ambulance patients who weren’t necessarily the sickest were being prioritized over other patients and that he had to wheel the woman around in a wheelchair for 20 minutes to even find a space to assess her.

Nurses could not begin treatment for the kidney failure with slow intravenous fluids while in the waiting room, while treatment with rapid fluids would likely cause a deadly pulmonary edema, Dr Tadros wrote.

‘Maybe that will get her a bed. I just wrote up 500ml to try and do something for her.’

Twelve hours after the woman first presented at emergency and six hours after she was first seen by Dr Tadros, the patient was finally found a bed.

‘Her abdomen is riddled with metastatic cancer of unknown primary… she’s probably going to imminently die from this. The worst part is, her and her daughter have been so nice despite our rubbish care,’ he wrote. 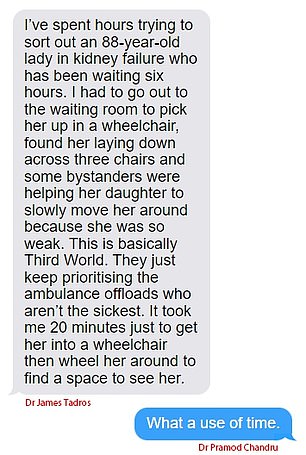 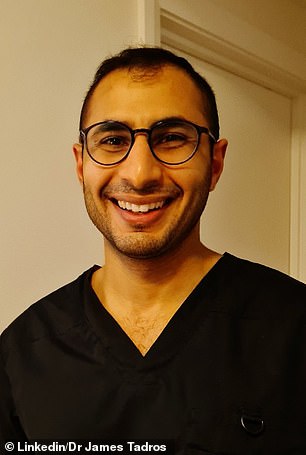 The Labor-led inquiry heard ambulance patients in NSW can regularly wait up to 36 hours to be allocated a bed in a ward for proper treatment because of bottlenecked hospitals, a situation known as ‘access block’.

Kelly Falconer, a senior nurse who also gave evidence, said nurses were routinely risking their registrations by going into waiting rooms and treating patients who were yet to be officially seen.

Dr Tadros said emergency rooms in Western Sydney hospitals were operating at 100 per cent capacity and staff burnout was common.

‘We work in an environment that we don’t see as conducive to good medical care.’ Dr Tadros said in an ABC report.

‘The frontline staff have become completely numb to it,’ Setthy Ung from the South Western Sydney Local Health District said.

‘They’ve learnt to adapt, to live on the knife’s edge.’ 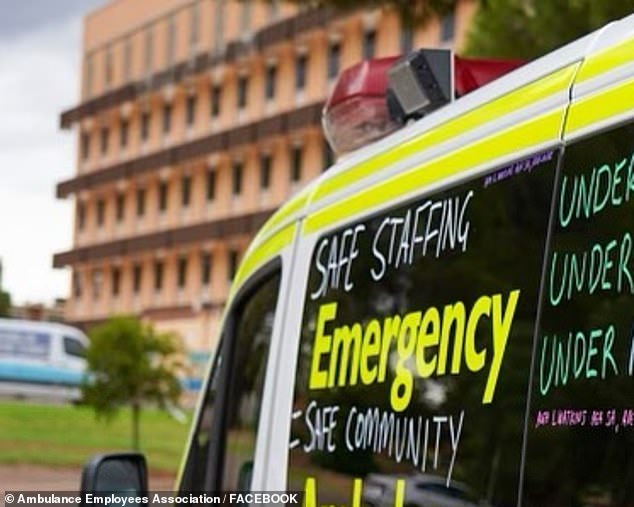 A NSW Health spokesperson said 84 per cent of ambulance patients in NSW were  transferred to emergency departments within 30 minutes.

But Health Minister Brad Hazzard was previously accused of being out of touch by the paramedics union after he told a March budget estimates hearing ambulance queuing was ‘rare’.

Health Services Union secretary Gerard Hayes has called for a Royal Commission into healthcare spending to get to the root cause as to why significant budget spending is failing to address the problem.

The inquiry will finish on Friday.