A couple who were filmed abusing and slapping airline staff in a mid-air tantrum for several hours have been fined.

Alexander and Nicole Thompson were flying from Vanuatu to Brisbane on a Virgin airline, on January 5, when the brawl broke out.

The New South Wales couple got upset when their four-year-old was not allowed to use a business class toilet, the Brisbane Magistrate Court heard.

The court heard how the couple were livid after their child was allowed to use the business class toilet but later refused because it was occupied by another passenger.

Mr Thompson, 41, and Mrs Thompson, each pleaded guilty to a Commonwealth charge of offensive and disorderly conduct on an aircraft, Courier Mail reported.

The Thompson’s defence lawyer said his client’s behaviour was ‘inexcusable’. 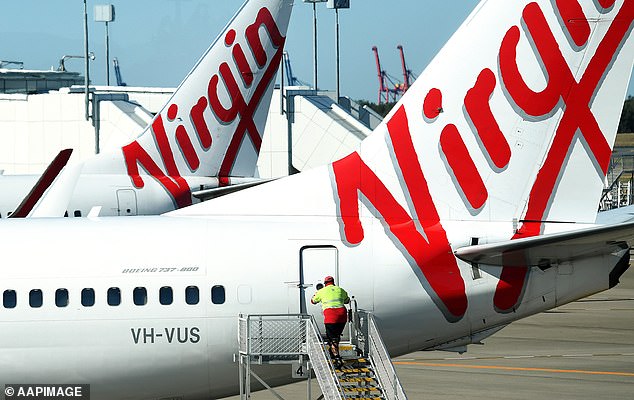 The couple were each fined $500 for offensive disorderly conduct. Mrs Thompson was further fined $300 for common assault (stock)

Magistrate Judith Daley said the couple were disrespectful to staff through their actions and tone of voice.

‘This is an example where the abuse went on for the whole of the flight virtually, some hours,’ Ms Daley said, the publication reported.

‘It’s a contained area. So that when people disrupt you can’t easily diffuse it by calling police and no one can escape because you’re all on the plane together.

‘They swapped staff, they tried to do everything to appease you, and nothing did.’

The couple were each fined $500 for offensive disorderly conduct. Mrs Thompson was further fined $300 for common assault.