Premier Dominic Perrottet will reap the rewards of his predecessor’s Covid policies as he celebrates the end of lockdown in NSW.

He appeared alongside Stuart Ayres, Brad Hazzard and Victor Dominello – all key ministers in his cabinet – as he heralded in a new Covid normal.

NSW Health announced 477 new Covid cases and six deaths overnight. Five of the victims were not vaccinated while the other had received one dose.

‘It’s been a tough 100 days of blood, sweat and no beers,’ Mr Perrottet said. ‘But tomorrow will be a great day.’

The new Premier thanked residents for their efforts during the 106 days they’ve endured in lockdown, adding that NSW has ‘led the way out of lockdown’.

‘Yesterday we hit 90 per cent first dose… NSW is leading our country out of this pandemic,’ Mr Perrottet said.

‘Not just leading our country, but leading the world… And that’s been the secret to our success.’

Dr Chant’s failure to appear marks the second time in a week she has not been present for a milestone press conference, sparking concerns she did not approve of Mr Perrottet’s roadmap out of lockdown 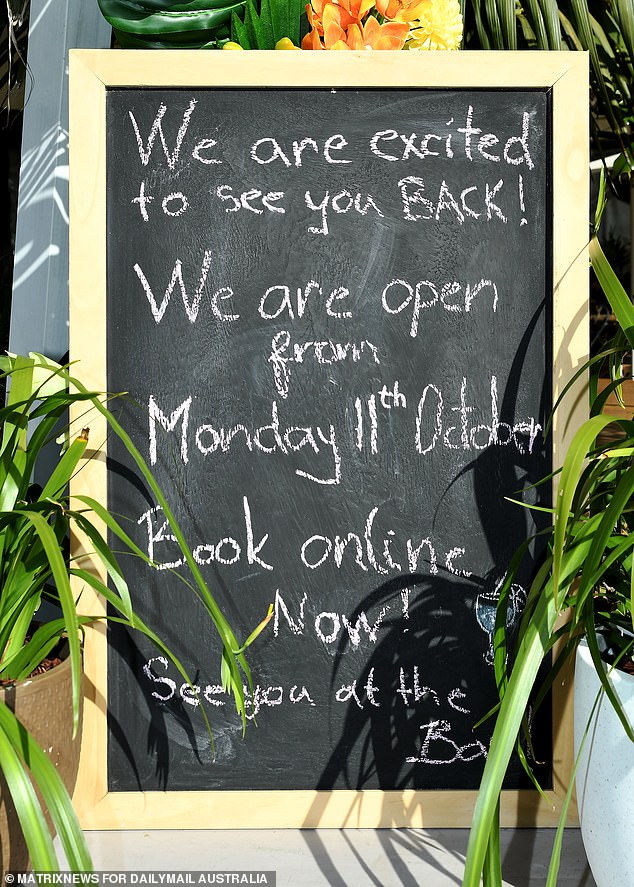 While she’s been a mainstay at press conferences the past four months, chief health officer Kerry Chant was not present.

But new Mr Perrottet appears content delivering his important messages without her, instead calling upon fellow ministers as he focuses on kickstarting the state’s economy.

Mr Ayres, who is the Minister for Jobs and Western Sydney, urged residents to continue getting vaccinated to allow the government to continue easing restrictions.

‘It’s not mission complete, we still have a long way to go,’ he said.

Mr Dominello helped to create the vaccine passport needed to enter premises in his role as Minister for Digital and Customer Service.

Health Minister Brad Hazzard has been a mainstay in press conferences for months.

The Premier and his ministers all urged the community to treat each other with kindness and patience as lockdown lifts.

Mr Perrottet said customers should treat every server as though they were their own neighbour’s son or daughter, indicating there would be ‘a lot of young people back at work for the first time in months’. 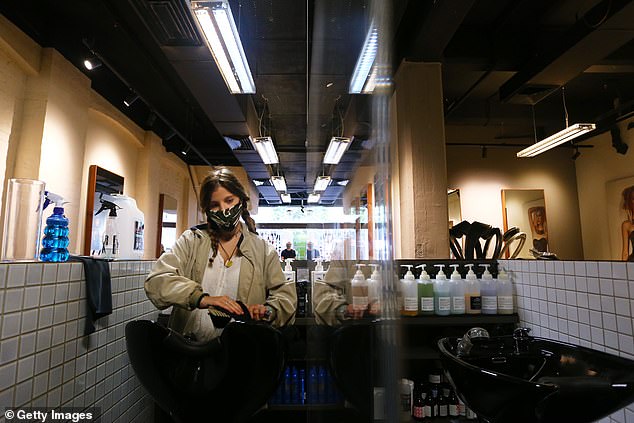 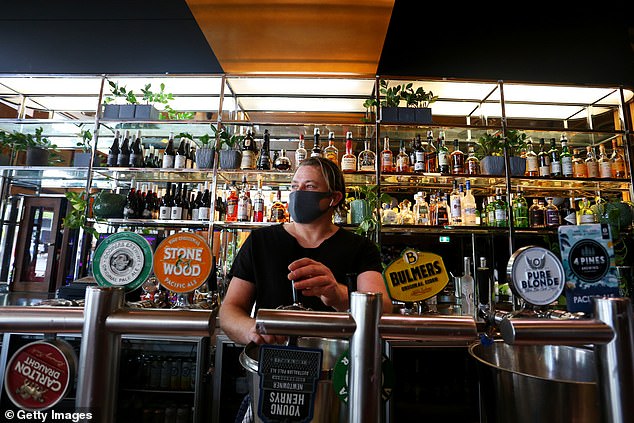 Mr Perrottet on Thursday announced a revised strategy to reopen NSW and questions were raised about Dr Chant’s absence.

It’s the second time in a week Dr Chant hasn’t stood alongside Mr Perrottet – as she did with former Premier Gladys Berejiklian – sparking concerns she wasn’t on-board with his accelerated roadmap out of lockdown.

Any further changes to the roadmap will be carefully considered during cabinet meetings, including lifting the limit of 20-person reservations at 80 per cent double dosed.

‘We’re not making policy on the run here, we’ll think things through,’ he said.

Dr Chant stood side-by-side with former NSW premier Gladys Berejiklian throughout the darkest days of the pandemic to keep the nation up to date about the virus’ spread in Australia’s largest state.

One reporter went as far to describe Dr Chant’s omission as ‘disrespectful’ and others questioned if she even endorsed the accelerated roadmap.

‘What does it say about your respect for Dr Kerry Chant when she’s lead us through this for the last two years and you wouldn’t invite her here today at your first major [press conference],’ one reporter asked.

‘It is a bit disrespectful isn’t it?’ 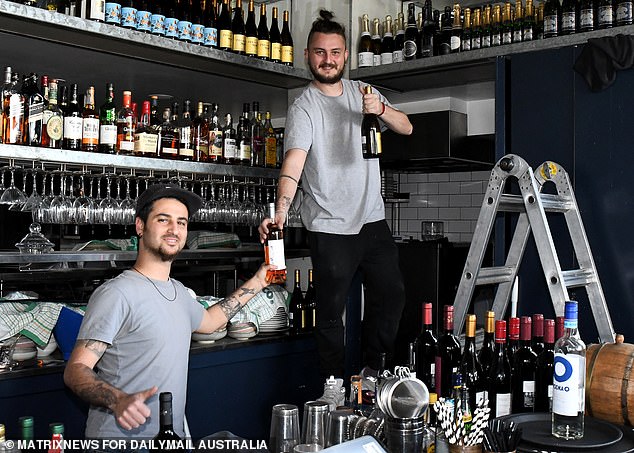 Mr Perrottet replied tersely: ‘Dr Chant is one of my favourite constituents in Epping. We have always had a great relationship.’

The reporter said it was reasonable during a health crisis to expect the chief health officer to attend major Covid press conferences.

‘The style might be different and changes will get made, but in my view we had a very constructive discussion last night and as the health minister has said, these changes are supported by the health team.’

After meeting with the crisis cabinet on Wednesday, when the state reached a 70 per cent double-dose vaccination milestone, Mr Perrottet announced the changes. 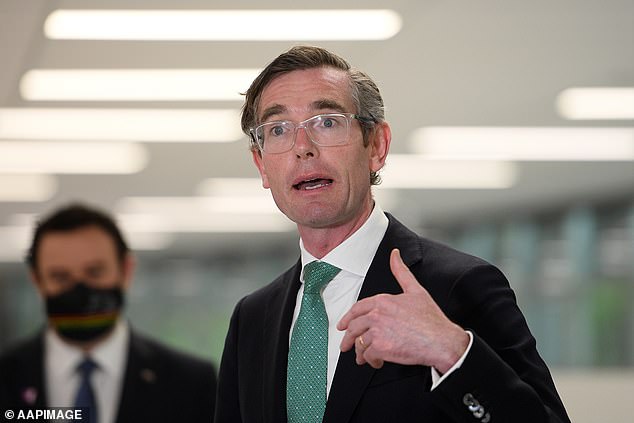 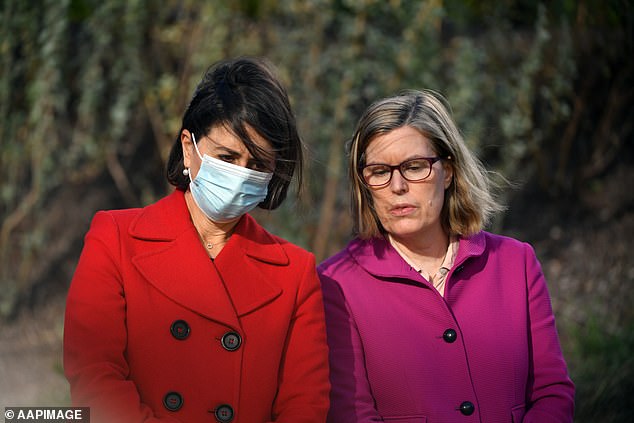 These reduced restrictions will apply only for the fully vaccinated until December 1, when freedoms are restored for the unvaccinated.

Dr Chant appeared nervous about the accelerated re-opening as she urged ‘caution’ among the state’s residents ahead of the first stage of restriction easing.

Hundreds gathered by the water at Bondi and Manly on Saturday night to party ahead of Covid restrictions being relaxed on Monday for double-jabbed residents. 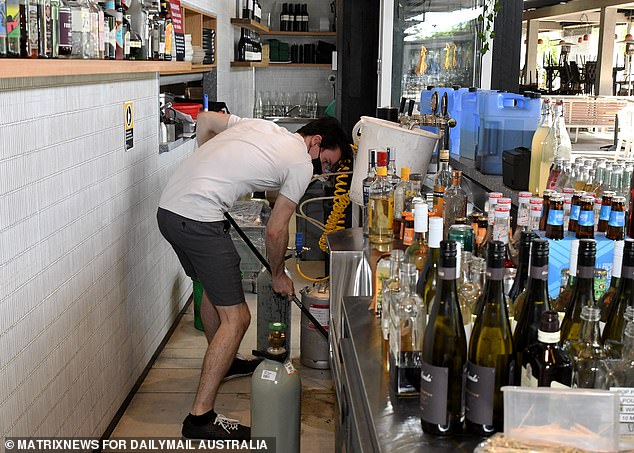 Massive crowds flocked to ‘The Office’ in Manly – a popular waterfront spot near the wharf – where music was blasting and an impromptu dance floor was set up.

Revellers were filmed crammed together and maskless as they belted out ABBA songs with drinks in tow while some were reported urinating.

Similar scenes occurred at Bondi beach, after police were forced to disperse huge crowds who began congregating throughout the day.

A number of move-on directions were given to residents while no fines were issued despite public health orders being in place until Monday.

Under Covid-19 restrictions only groups of five fully-vaccinated adults are allowed to gather outdoors until the state’s stay-at-home orders are eased on October 11. 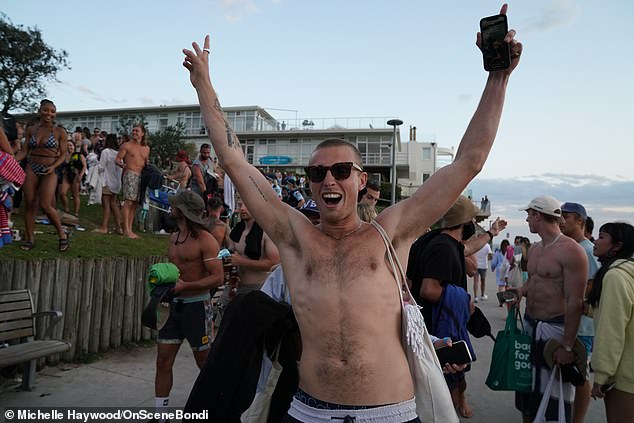