Anthony Albanese has been angrily confronted by a furious local whose property has been repeatedly flooded in recurring disasters, saying no-one is helping him.

The Akubra-wearing Windsor resident tackled the Prime Minister and NSW Premier Dom Perrottet as they made a flying visit to flood-affected areas in the Hawkesbury region, north of Sydney.

He raged at the lack of urgency from all levels of government to come up with long-term solutions to stop the floods happening time after time.

‘No-one’s going to help me clean up,’ raged the local. ‘Out the backyard, I’ve got chemical containers that have floated in.

‘We actually need action now. Your governments need to start working together. You’ve had flood studies since 2012…but nothing’s happened.’

He desperately appealed to the PM, as a fellow Rabbitohs rugby league fan, to come to the area’s rescue.

‘You and I are both Souths supporters,’ he said. ‘Let’s get into the front row and start working. Otherwise you’re going to visit here again.’

The exasperated local revealed his land was under four metres of water but so far his home had luckily escaped the worst of the rising waters this time.

But he said the local economy would be smashed by the latest floods with businesses closed down for days as locals take time off for the big clean up.

And that’s even before the cost of repairs, he said, which mostly wouldn’t be covered by insurance. 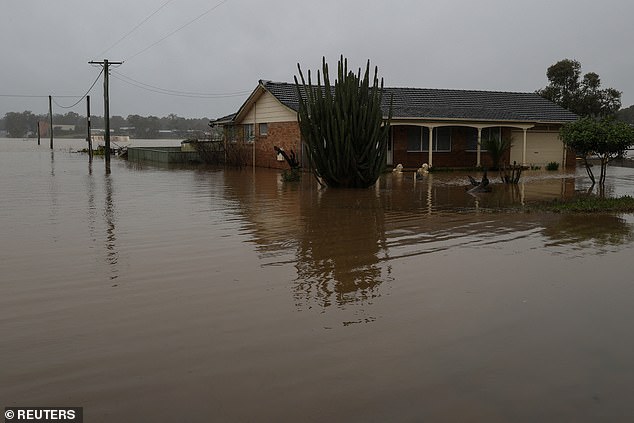 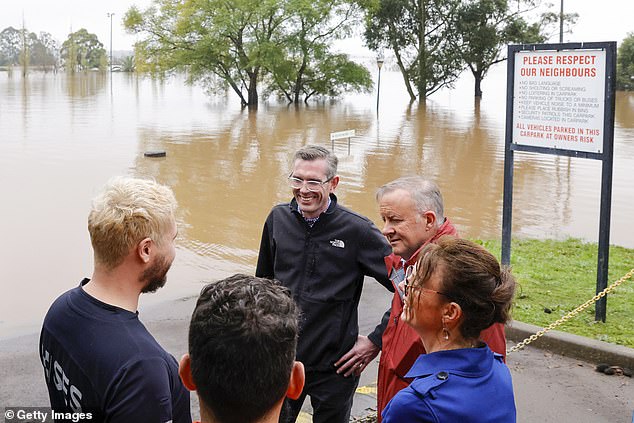 Prime Minister Anthony Albanese and NSW Premier Dom Perrottet made a flying visit to flood-affected areas in the Hawkesbury region, north of Sydney

‘The majority of people here, including me, we’re not insured,’ he told the politicians. ‘The cost that is incurred, not only to the government, but to the locals, is ongoing.

‘This happened three months ago and everyone was talking about fixing the same problem, “It’s all on the radar…”

‘But nothing happened. It’s just getting repetitive. We’re just fed up with it.’

He said calls to the local and state government had proved fruitless in even trying to find help to tackle the clean up operation after the floods.

He demanded a fresh bipartisan approach to the problem which actually delivered solutions and not just press releases.

The premier vowed to take up the issue with the local council, who the Mr Perrottet said had previously been slow to act, but the response was shot down by the local.

‘You will speak to the council but that’s the problem,’ he fumed. ‘There’s a lot of speaking…but we need action.

But he said he welcomed the sight of the Labor PM and Liberal Premier making the trip to the affected area.

‘This is the first step – getting together and getting an action plan happening,’ he said. 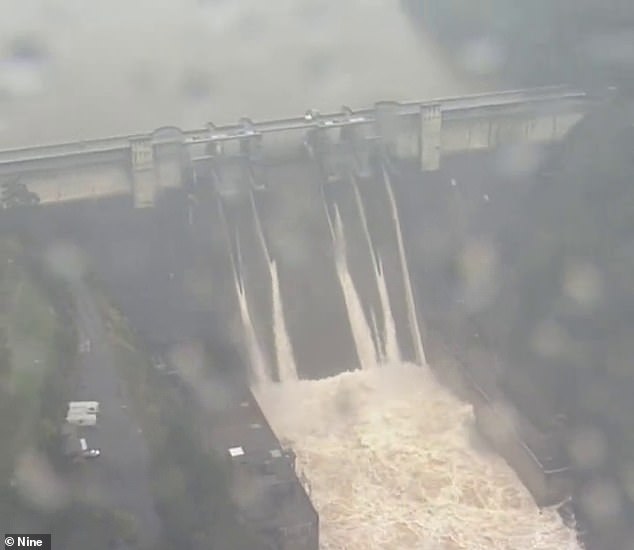 The local partly blamed the floods on the strategic release of the Warragamba Dam to prevent it overflowing, but which then sends flood water crashing downstream into the Hawkesbury-Nepean Valley. 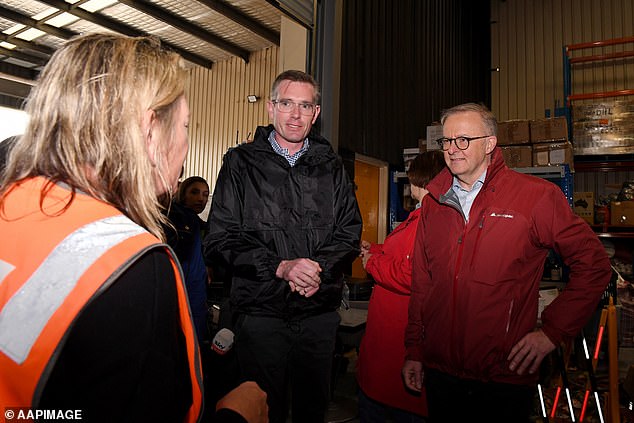 Nearby Richmond has received almost four times the average monthly rainfall in the past week, recording 174mm in the last seven days versus the monthly July average of 44mm.

But the local partly blamed the floods on the strategic release of the Warragamba Dam to prevent it overflowing, but which then sends flood water crashing downstream into the Hawkesbury-Nepean Valley.

‘You [are] releasing the dam at 97.9 per cent when the catchment areas are full and the cry comes from the government that it’s not a flood mitigation dam,’ he seethed.

‘Look over my shoulder. That’s what happens. Somebody needs to pick up the ball and run with it.’

He said the locals had already been warned to expect yet another flood in two months’ time.

‘They’re already talking that we’ve got this flood happening again in September,’ he said.

‘We’re already getting messages saying it’s going to happen and, “Are you prepared?”

‘The locals are always prepared. Government’s not.’

The shell-shocked politicians – who had flown in by helicopter from the SES HQ at Sydney’s Homebush – listened mostly in silence to the local’s spray.

But Premier Perrottet said at a press conference earlier on Wednesday that they had been warned releasing the water earlier would have had a potentially greater flooding impact.

A proposal to raise the dam level by 14m to mitigate the flood-risk is still under review five years after it was first proposed as part of the Hawkesbury-Nepean Valley Flood Risk Management Strategy.

‘It’s a complex project, and it is one that requires a lot of planning, approvals and environmental approvals of both a state and federal level,’ said the premier.

‘But in relation to releasing water from the dam, the advice we’ve received that would actually have a more negative impact on those communities in that region.’ 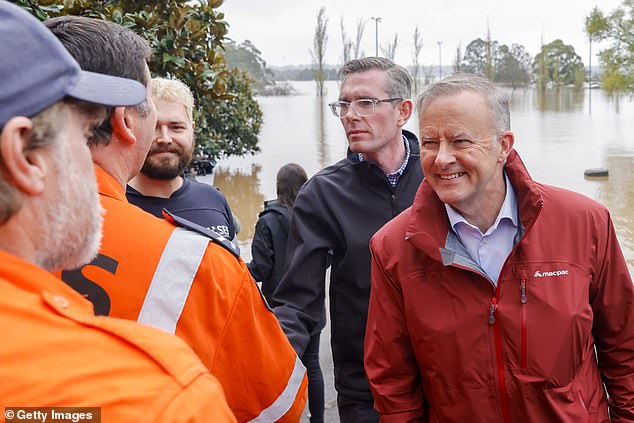 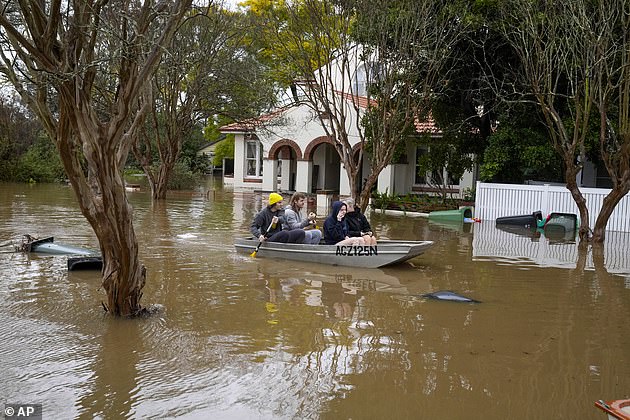 Earlier, Mr Albanese had announced flood-affected residents will be eligible for $1000 disaster payments for adults and $400 for children, which will be transferred into bank accounts as early as Thursday.

The population of the eligible LGAs combined is 3.67 million.

The disaster payments are in addition to initial assistance flagged by the federal and NSW governments announced earlier this week.

‘We know this is having a real impact on people. We want to make sure the supports are available as soon as possible,’ Mr Albanese said.

‘That’s why we’ve been very quick to act in partnership with the NSW government and it is pleasing that we’ve been able to work together so strongly. We know that these circumstances have impacted people there in the area where you are.’