A TikTok comedian who has accurately guessed the number of new Covid cases in NSW for three days in a row says the state’s health department has asked him to cease posting his ‘calculations’ online, but it hasn’t stopped him from making his predictions for Saturday.

In a video uploaded to Twitter on Friday evening, Jon-Bernard Kairouz teased his latest prediction of 111 cases for Saturday, despite his claims he received a stern phone call from a NSW Health representative demanding he refrain from posting further videos.

‘He said we would have to cease giving out the numbers because we’re compromising the public health system,’ Kairouz told news.com.au on Friday afternoon.

The NSW Health employee reportedly said it would be in his ‘best interest’ to cease making any more videos, and if he didn’t there could be ‘consequences’ for health staff.

The TikTok star claimed he told the worker he simply used maths to calculate his predictions and did not have a source in the department.

Many people on social media are speculating Mr Kairouz has an informant after he correctly predicted the number of new Covid-19 cases in NSW for three days in a row.

Mr Kairouz has uploaded a video to Twitter on Friday evening predicting 111 Covid cases for Saturday, despite claims NSW Health has warned him to stop making the calculations

Mr Kairouz has repeatedly denied the accusations, claiming he uses data based on the previous day’s results to arrive at his predictions.

The 25-year-old says he comes up with his answers by using a Casio scientific calculator and ‘simple maths’, based on cases infectious in the community, the diameter and circumference of hotspot areas and population areas.

Mr Kairouz maintained he would continue sharing his calculations despite the warning. 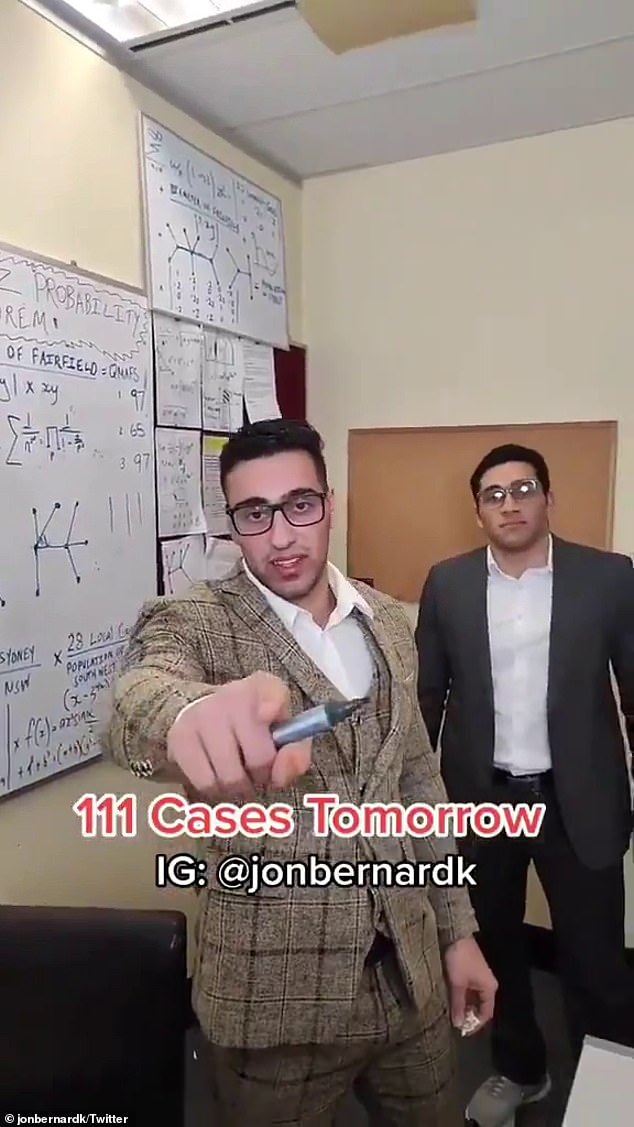 ‘I’m not going to be intimidated, it’s a bit of fun at the end of the day,’ he said.

The development comes as the TikTok star said he had received threatening messages from followers who believe he is related to Gladys Berejiklian’s new partner, leading lawyer Arthur Moses.

The comedian from western Sydney, has gained a huge social media following through his spot-on predictions of new coronavirus cases. 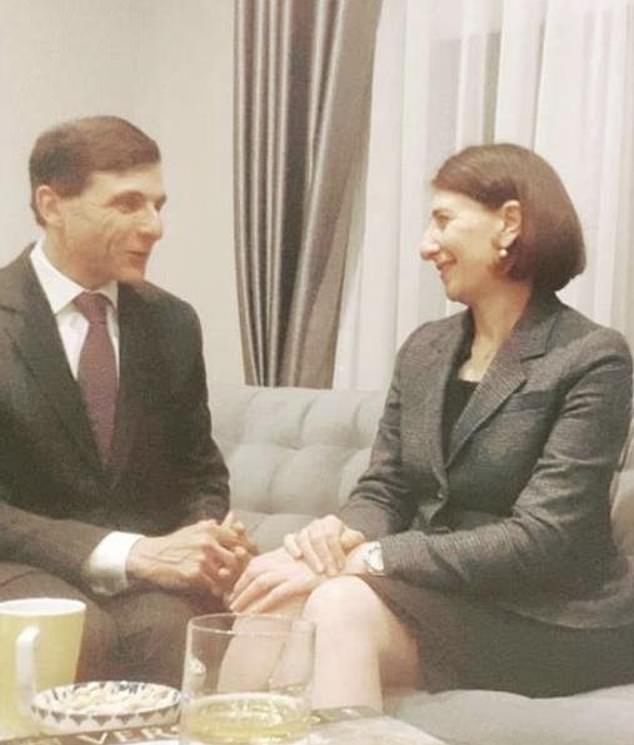 Kairouz told Nova’s Fitzy & Wippa he had been accused of being a relative of the NSW Premier Gladys Berejiklian, or her new boyfriend Arthur Moses (pictured together)

‘Look, I’m doing the community a favour and it’s not like I’m doing anything wrong or unethical, it’s just maths and cold hard numbers,’ he told the breakfast radio duo.

Ms Berejiklian was asked directly about Kairouz’s predictions during her Covid update on Friday morning, and whether she was worried about information being leaked from NSW Health.

‘All we can do is focus on the job at hand,’ she replied.

‘I know at the moment a lot of people have, or [are] alleged to have, various bits of information and advice but what is important for us as a team – team New South Wales – is to focus on what is necessary and that is to lead our state during the most challenging of times.’

Kairouz said his new-found fame had given rise to various conspiracy theories.

‘Honestly there’s rumours and conspiracy theories flying around that I’m related to Gladys or her nephew or related to her new boyfriend, that’s not the case,’ he told the show.

Ms Berejiklian, who is notoriously private about her personal life, is believed to be dating the man who represented her during a corruption inquiry into her former boyfriend and disgraced MP Daryl Maguire.

The Premier’s relationship with high-profile barrister Arthur Moses was seemingly confirmed in June through a loved-up Instagram post shared by her sister.

Daily Mail Australia is not suggesting Mr Moses is related to Kairouz, or the source of his Covid information. 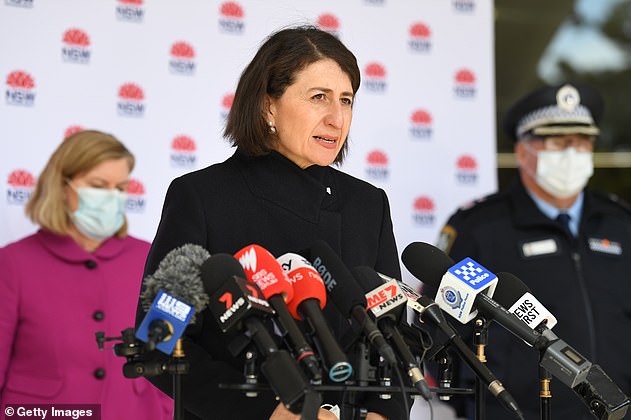 Kairouz shut down theories he has a connection to Gladys Berejiklian or an inside source at NSW Health, insisting ‘it’s numbers mate, it’s a solid formula’

Kairouz’s lighthearted approach to the lockdown was first revealed when he posted a video to TikTok last week poking fun at Ms Berejiklian urging Sydney residents to ‘not browse’ while shopping.

In the video the comedian is seen sprinting into the Clemton Park Coles and grabbing a trolley, before pushing it through the aisles at a breakneck speed grabbing items.

Kairouz said he and his brothers employed a ‘Kairouz probability algorithm’ in order to predict the cases. He also revealed when he first realised his talent for predictions, which bears an uncanny similarity to the plot of Academy Award-winning film Good Will Hunting.

‘To be honest I work at a college as a janitor and sometimes I’ll see an equation on a whiteboard and I can just finish it.

‘I feel like I’m smarter than most of the kids there!’ 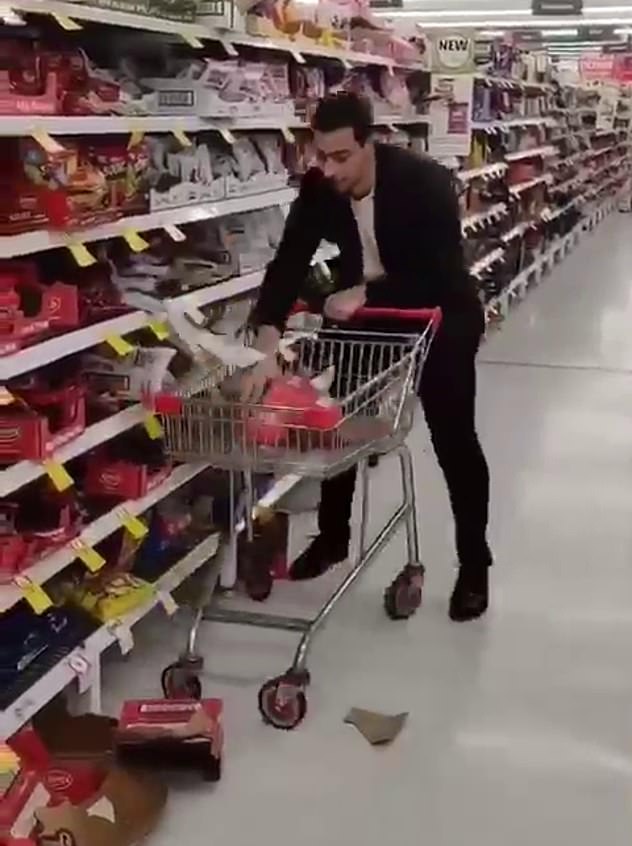 Kairouz appeared on Studio Ten shortly after Ms Berejiklian’s press conference to call her response to his predictions a ‘non-answer’.

‘I mean, just be honest and upfront with the reporters,’ he said. ‘It’s simple calculation on my end and the maths doesn’t lie, what can I say.’

The sudden celebrity was also asked what tomorrow’s numbers would be.

‘I’m going to have to crunch the numbers in the old equation and see how I go,’ he replied.

‘There’s no reason for people to doubt me, that’s three in a row… and perfect numbers like perfect men are very rare, so I’ll guess we’ll see.’