With the path out of lockdown finally mapped out, New South Wales is banking on reaching a 70 per cent full vaccination rate by mid-October, but a 15 per cent drop in jab rates threatens to derail the reopening plan.

New South Wales has been leading the way on vaccination rates and is on track to hit the target marker by October 18 – a date which has tentatively been set by the Berejiklian government as ‘Freedom Day’ for the fully-vaccinated.

But the optimistic timeline relies on the jab rate maintaining its impressively high levels, something that hasn’t occurred in many other parts of the world, with rates consistently stalling around the 60 per cent mark.

Sooner or later the soaring vaccination levels will inevitably start to slide as our freedoms are left in the hands of the vaccine hesitant, putting the state’s reopening timetable in jeopardy.

In fact, the numbers are already starting to wane heavily in NSW with a 15.8 per cent drop in vaccinations in just the past week. 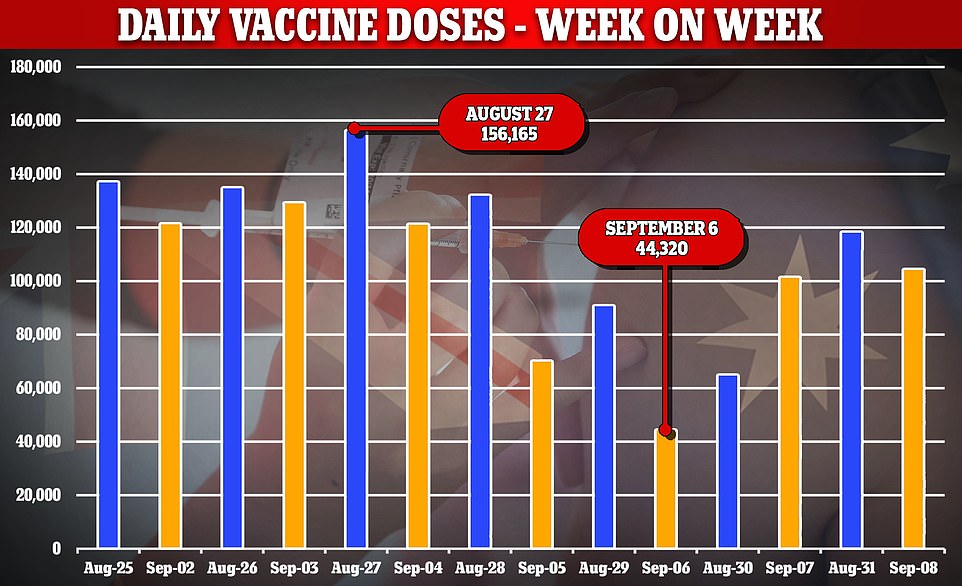 Numbers are already starting to wane heavily in NSW with a 15.8 per cent drop in vaccinations in just the past week

HOW VACCINATION RATES HAVE PEAKED THEN FALLEN IN NEW SOUTH WALES

Number of doses, both first and second, given out by NSW Health and across the GP network 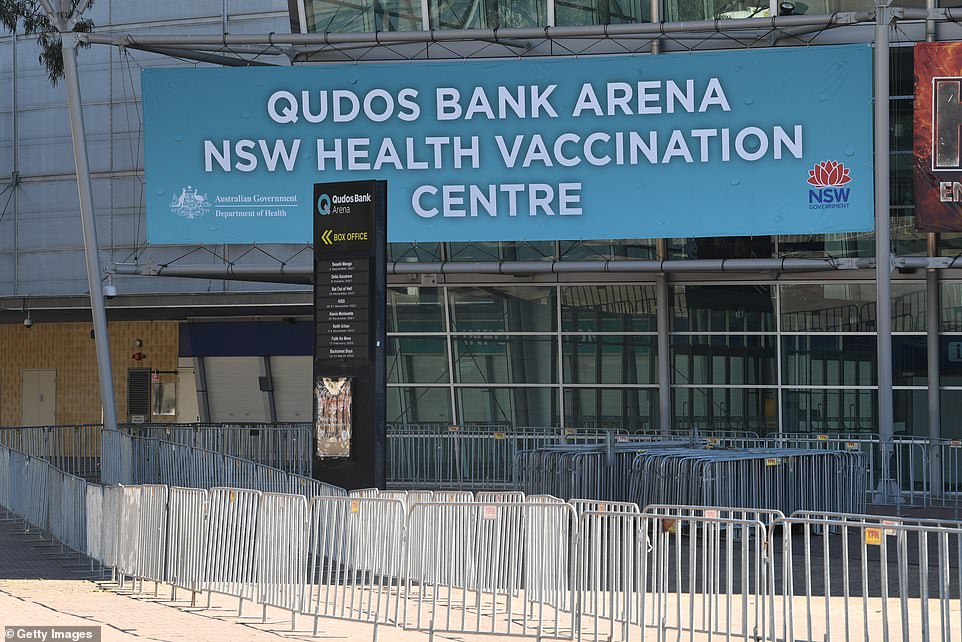 The statistic is mirrored in many other countries which have hit the ‘vaccination ceiling’ after a strong start to their rollout.

The main factors contributing to declining jab rates overseas are largely attributed to vaccine-hesitancy, ‘political reasons’ and a bizarre phenomenon which has seen millions of people fail to show up to receive their second dose.

It means that while vaccination rates are high when populations are first given access to the jab, the number of those willing and still unvaccinated starts to decline.

The number of residents rolling up their sleeves in NSW each day this week has been less than the corresponding day last week.

In the seven days from August 26 to September 1, the state administered 821,228 jabs across the GP network, pharmacies and at NSW Health vaccine hubs.

But in the following week between September 2 to 8, there were 691,500 shots given out – representing a steep 15.8 per cent slump.

If the numbers keep declining it could unfortunately see long-suffering NSW residents remain under stay-at-home orders beyond the mid-October target and set back the national cabinet’s four-phase reopening plan penned by the Doherty Institute. 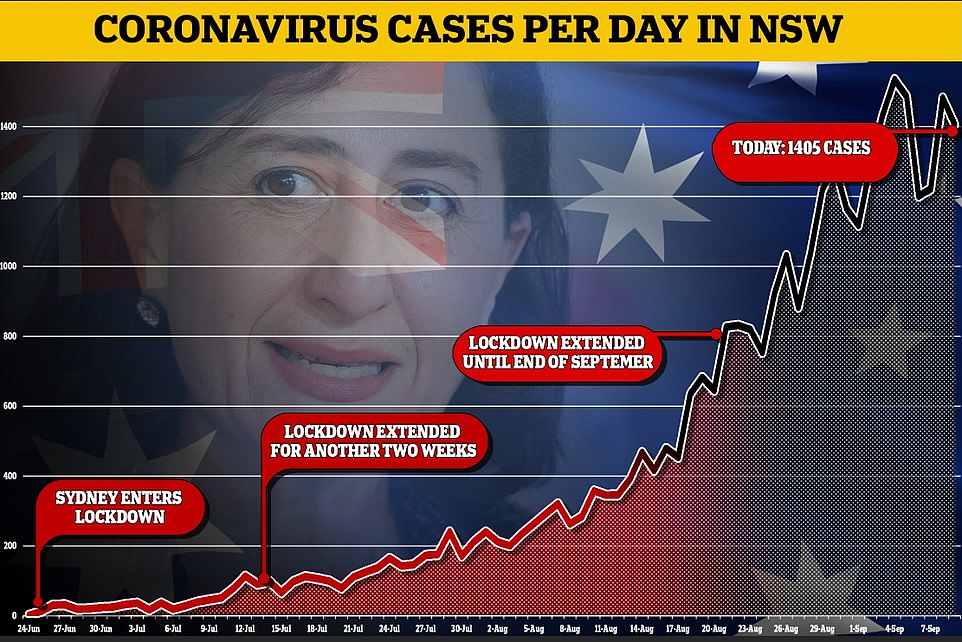 NSW recorded a further 1,405 new Covid cases on Thursday and five more deaths with the Berejiklian government banking on high vaccination rates as the ticket out of lockdown 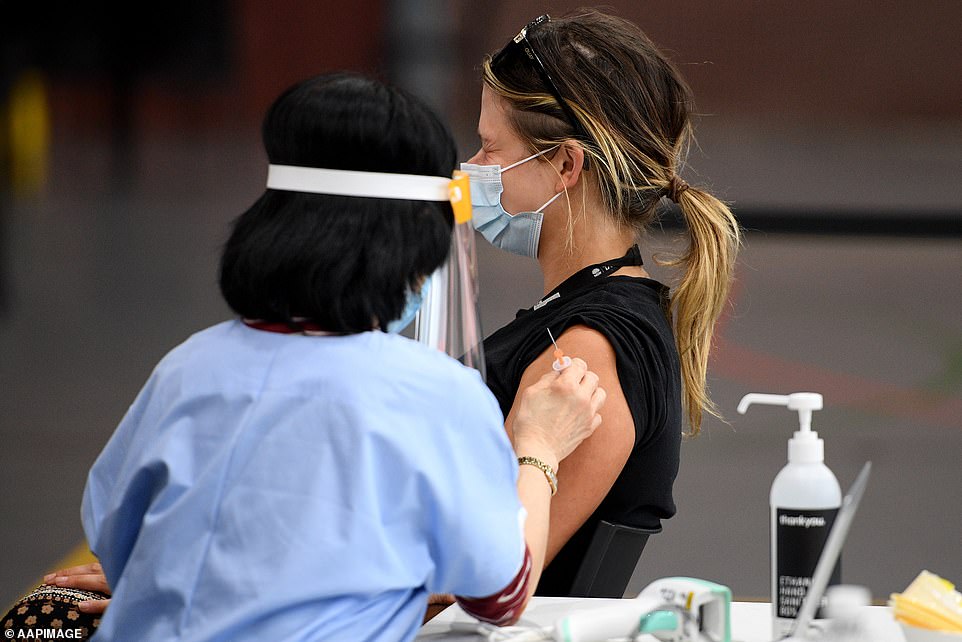 The number of residents rolling up their sleeves in NSW each day this week has been less than the corresponding day last week. Pictured: Covid vaccine clinic in Sydney’s Redfern 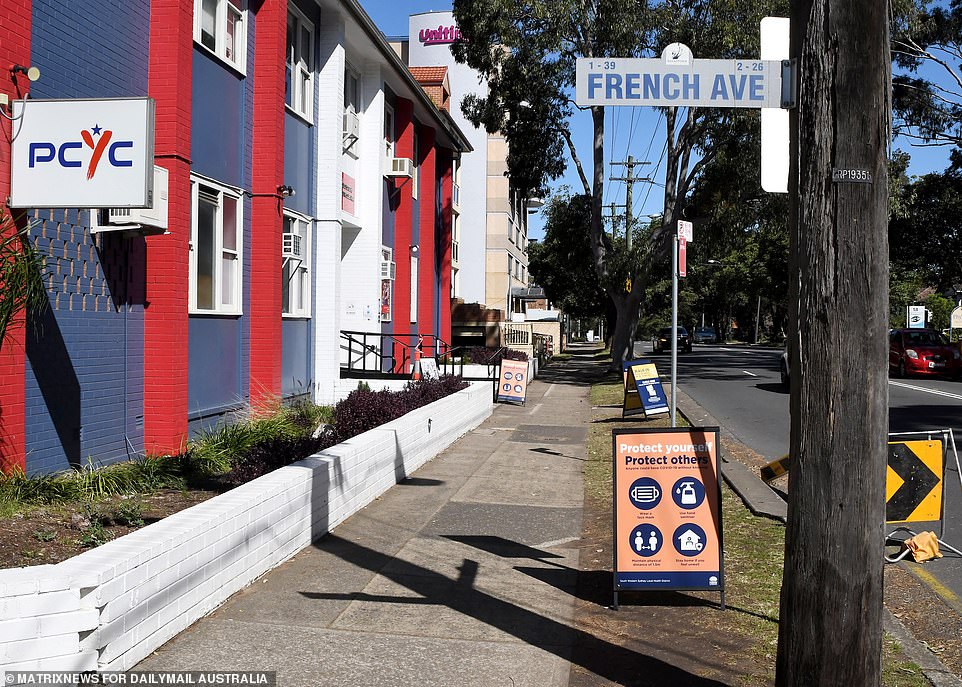 Gladys Berejiklain unveiled the state government’s long-awaited roadmap out of lockdown on Thursday, which has seen Sydneysiders living under stay at home orders for almost 12 weeks.

Under the plan pubs, restaurants, cafes, gyms, retail stores and personal services like hair salons will be able to throw open their doors to the fully vaccinated, with the one person per 4sqm rule enforced indoors and the one person per 2sqm rule adhered to outdoors.

Customers and patrons will need to prove their vaccination status when they scan in via QR code using the Service NSW app.

Weddings and funerals can also go ahead with a limit with a 50-person cap on guests, along with religious services. 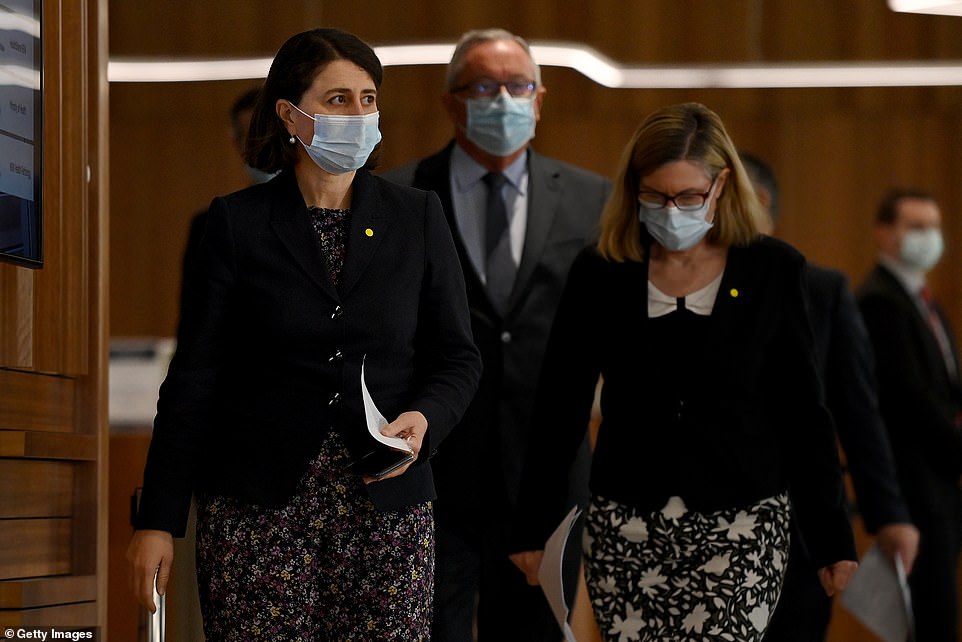 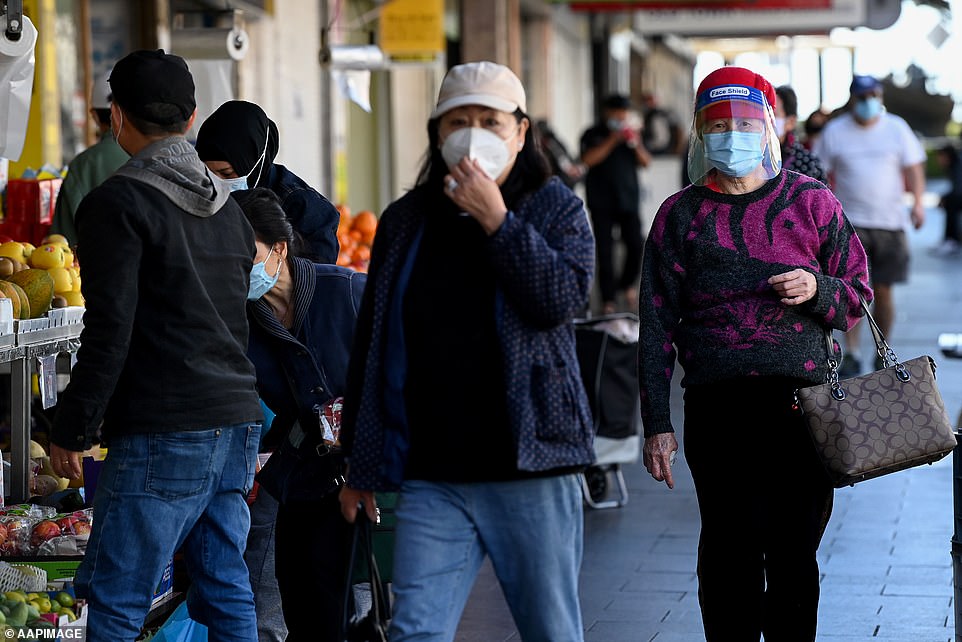 Sydneysiders are banking on the 70 per cent fully-vaccinated rate being reached in mid-October to free millions from lockdown (pictured, Sydney’s Bankstown, a hotspot LGA)

Up to five guests will be allowed in the home, with gathering of 20 permitted outdoors.

Sporting events will also be given the green light but under the one person per 4sqm rule with a limit of 5000 spectators, while cinemas will be able to operate at 75 per cent capacity.

Those who refuse to get the jab will not be granted access to the same freedoms as those who are fully vaccinated and only allowed to attend essential venues such as supermarkets.

But it all hinges on Australians continuing to line up and get the jab.

At the moment Australia’s overall vaccination rate is 39.4 per cent for those aged over 16 vaccinated – giving the nation a grim ranking of 34 out of 38 in the OECD.

NSW as a state has 43.5 per cent of its population double-dosed with 76.4 per cent receiving their first shot.

While it may appear there’s not much further to go in order to reach the national cabinet’s phase two target of 70 per cent, examples overseas show just how much of a challenge it may turn out to be.

The UK started to ramp up its very successful vaccination campaign at the end of January, well ahead of Australia, and have only achieved 68.8 per cent coverage.

The number of daily vaccinations dropped off a cliff in late March and April, from a high of 750,000 jabs in a single day to less than 50,000. 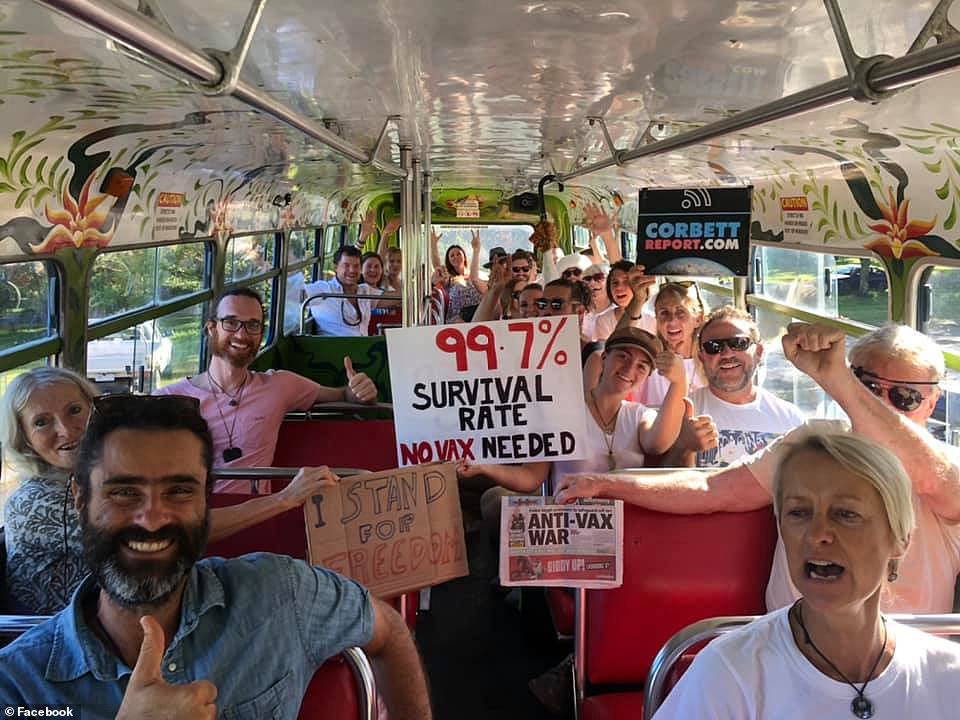 The main factors contributing to declining jab rates overseas are largely attributed to vaccine-hesitancy, ‘political reasons’ and a bizarre phenomenon which has seen millions of people fail to show up to receive their second dose. Pictured: A busload of Covid-deniers in Byron Bay

In the United States, which has only reached a vaccination rate of 58.9 per cent for those aged over 12, it has been a similar story.

There were three millions doses a day being administered back in April but by mid-July those figures dropped to about 650,000.

According to Dr Jennifer Kates, the vice-president of the Kaiser Family Foundation, which monitors vaccine sentiment, part of the problem is due to a core of vaccine-hesitant ‘holdouts’.

‘A persistent share of about 20 per cent are hold-outs, who say they won’t get vaccinated at all, or only will if required by their employer,’ she told the BBC.

Another reason is due to the toxic nature of US politics, which is now impacting constituent’s health decisions. 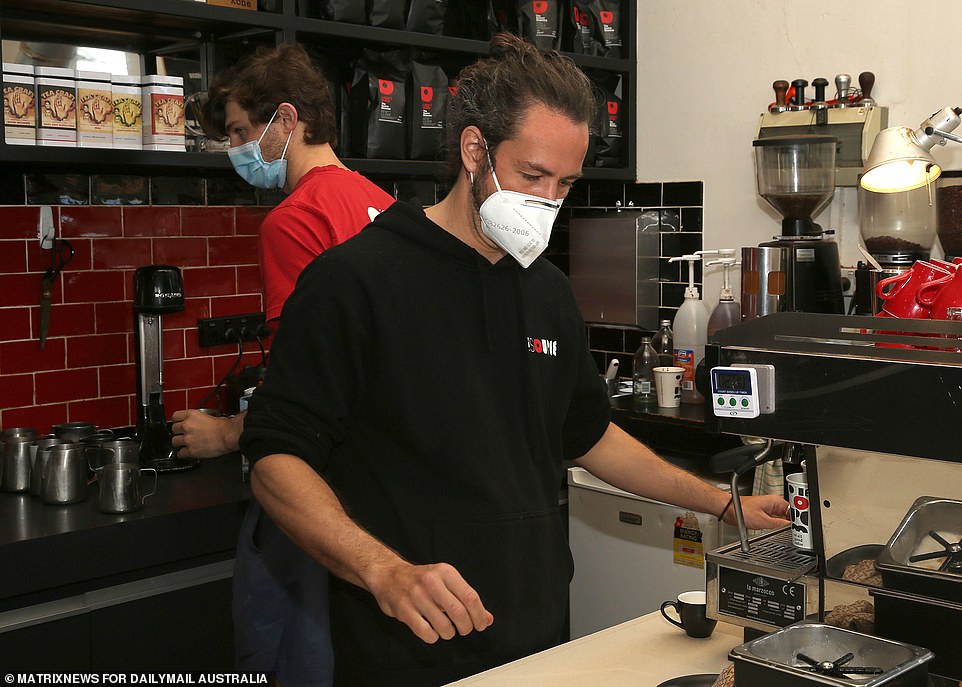 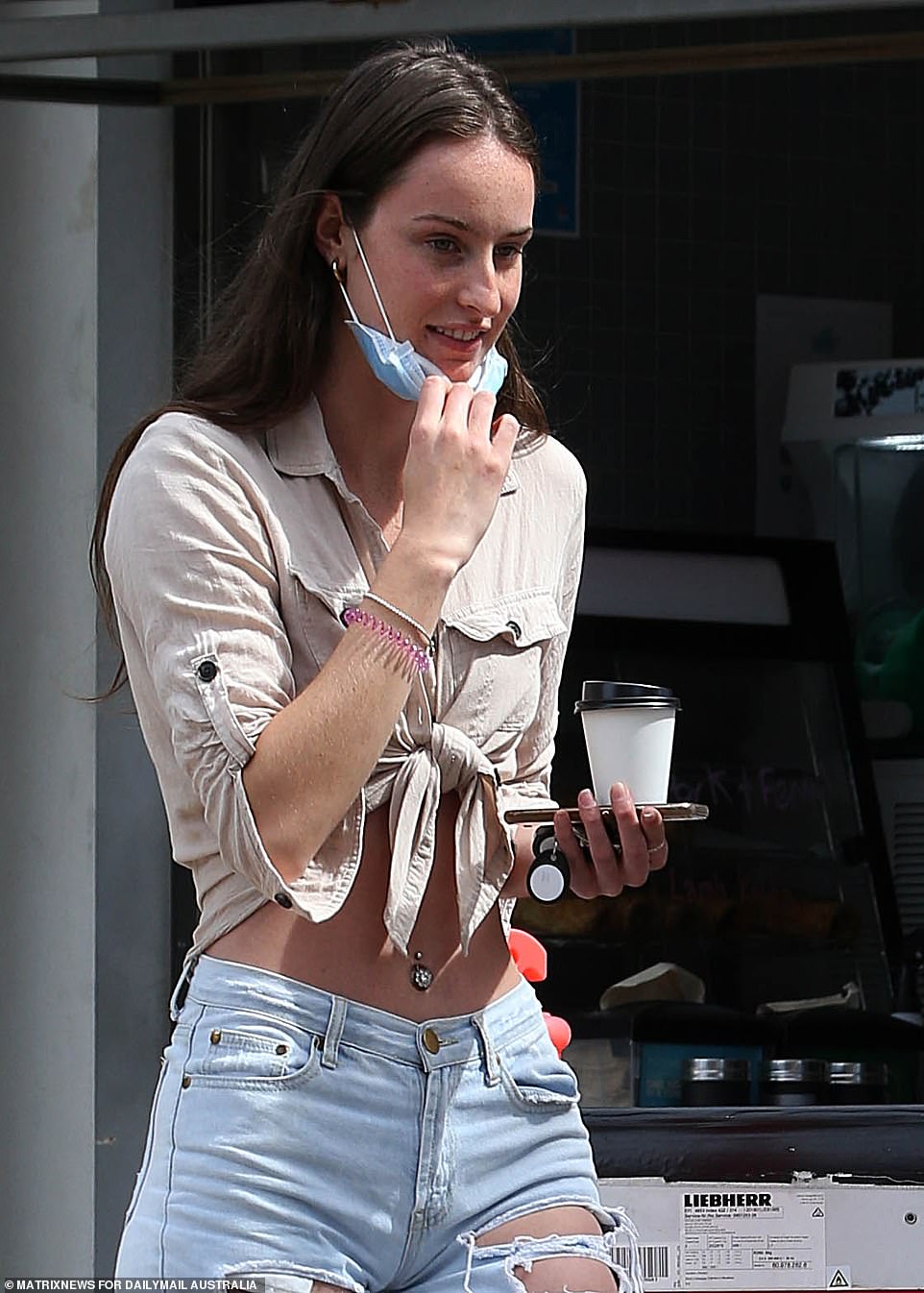 At the moment Australia’s overall vaccination rate is 39.4 per cent for those aged over 16 vaccinated – giving the nation a grim ranking of 34 out of 38 in the OECD. Pictured: A resident in Sydney’s Lower North Shore 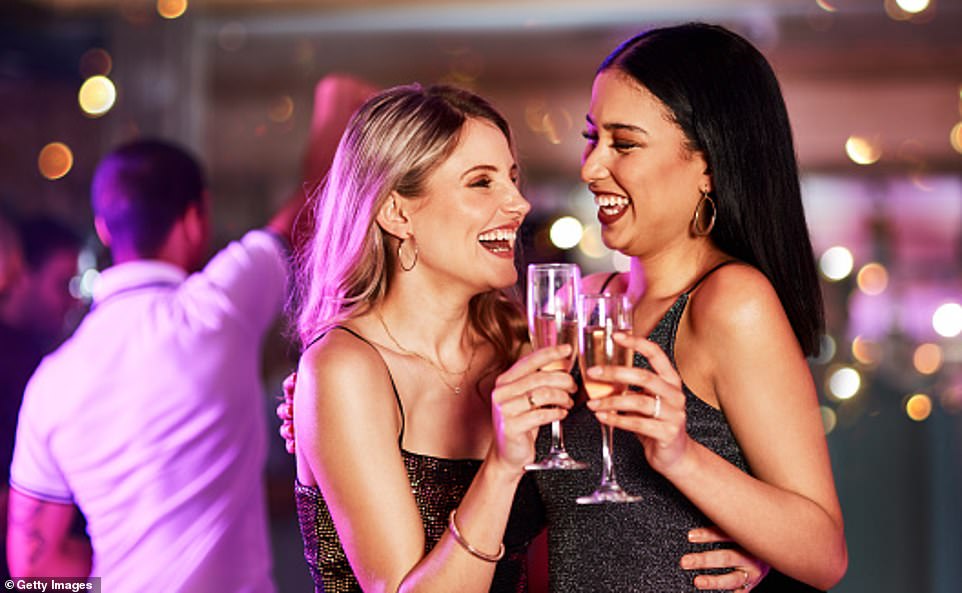 ‘The biggest reason from my perspective is defiance along a political divide,’ Baylor College of Medicine vaccine expert Prof Peter Hotez said.

‘The messaging coming from conservative news outlets and conservative members of Congress is if you’re a young person you don’t need it because the death rates are low and vaccines are being used as an instrument of control by the liberals.’

While NSW’s impressive first dose feat of 76.4 per cent seems to suggest the state is guaranteed to reach its reopening target, in the US more than five million people failed to turn up for their second shot.

About eight per cent of Prizer or Moderna vaccine recipients missed out on getting the maximum protection against the virus and in other countries a similar phenomenon has been observed.

Some told the New York Times they were sick after the first dose and refused to get the second while others simply felt they were protected enough with just the one shot. 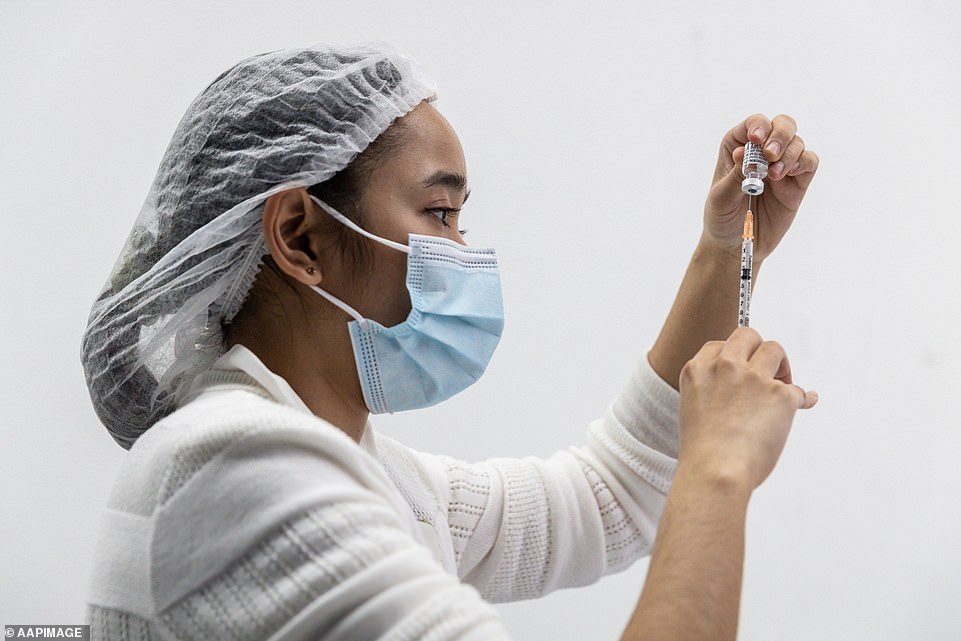 While NSW’s impressive first dose feat of 76.4 per cent seems to suggest the state is guaranteed to reach its reopening target, in the US more than five million people failed to turn up for their second shot. Pictured: An Australia health worker prepares a Pfizer vaccine 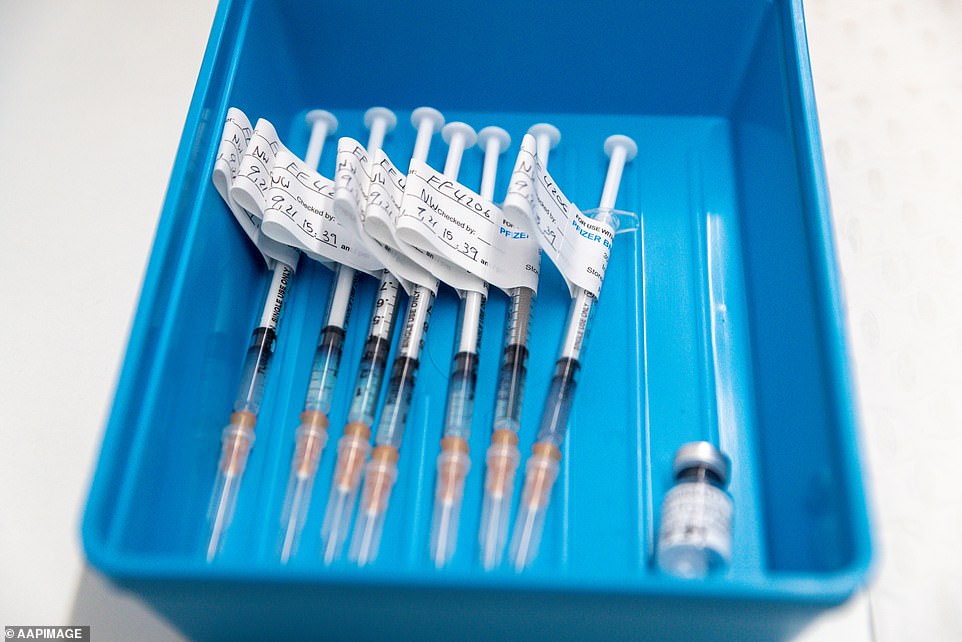 WHAT CAN YOU DO ON ‘FREEDOM DAY’?

Only fully-vaccinated people and those with medical exemptions will have access to the freedoms allowed under the Reopening NSW roadmap.

The freedoms for vaccinated adults will come into effect on the Monday after NSW hits the 70 per cent double dose target and include:

Gatherings in the home and public spaces:

Weddings, funerals and places of worship: