Teachers in New South Wales have explained the reasons why they’re striking after marching on NSW Parliament demanding better wages and working conditions.

Dressed in red shirts emblazoned with the text ‘More than Thanks’, fired up teachers called on the government to offer them more than a three per cent pay rise on Thursday.

The NSW Teachers Federation is asking for a pay rise of between five and seven per cent to keep up with the cost of living.

Aussie teachers on Reddit and social media have cited work load as their main concern.

‘It’s the ridiculous amount of work that has nothing to directly do with teaching and learning. It’s the changes in policies that require teachers to support a wider array of students in the same class.’ 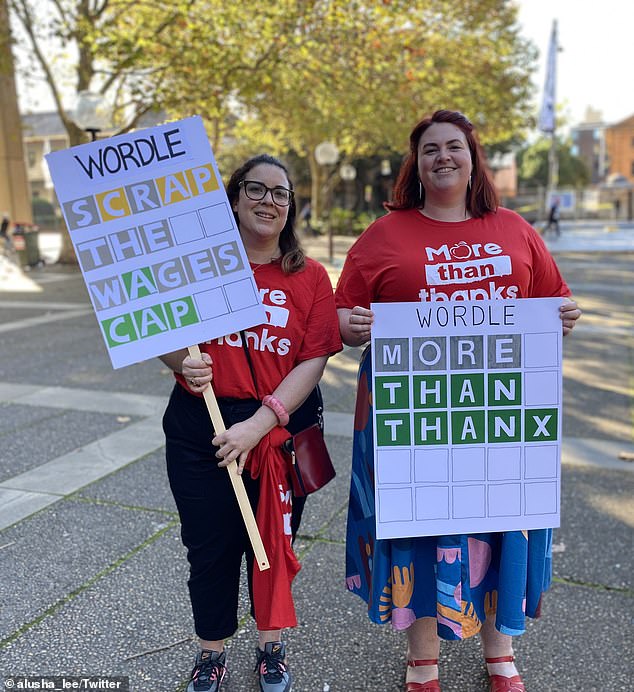 The same teacher added that schools have ‘no idea how to measure workload’ and teachers often have to ‘parent students’.

Another posted: ‘Pay isn’t even the problem though – it’s workload.’

‘My contract says 30 hours a week, but I’ve easily cleared that by Wednesday because of admin. What I wouldn’t give for a PA, just so I could do my job.’

‘I earn $110K. My problem isn’t really how much I’m paid. It’s a combination of the following:

‘It’s the ridiculous amount of work that has nothing to directly do with teaching and learning. It’s the changes in policies that require teachers to support a wider array of students in the same class. The dark age level of understanding when it comes to managing teachers’ time. Schools have no idea how to measure workload, let alone attempt to manage it.

The fact that parents and the system often require teachers to parent students. It’s the push to keep kids out of trades and apprenticeships before they finish year 12 and then ignoring that this may be an issue. It’s when schools take teachers away from their administrational lines to provide cover for classes due to no redundant staffing.’

‘I earn $78K and I’m a second year teacher in Western Australia. Pay is not the problem; it is workload. Too much admin for the role. Either pay has to increase to cover all of this unpaid labour, or the labour has to decrease.’

‘Anytime I see someone say, ‘Teachers get 12 weeks off a year,’ I immediately know their experience with teachers is entirely from the perspective of a student. If I worked the same amount of hours a teacher worked as a labourer, I’d be making six figures.

‘Ask any kind of a teacher where they spent after-school hours, their weekends, and their school holidays. We’d be at school by 7 in the morning, and leave for home around 6 at night. Weekends were either programming at home or at the school, holidays spent at school, setting up classes, building curriculum for the term, professional development courses, and research. If your office job is underpaid and overworked with excessive unpaid hours, join your union and document everything.’ 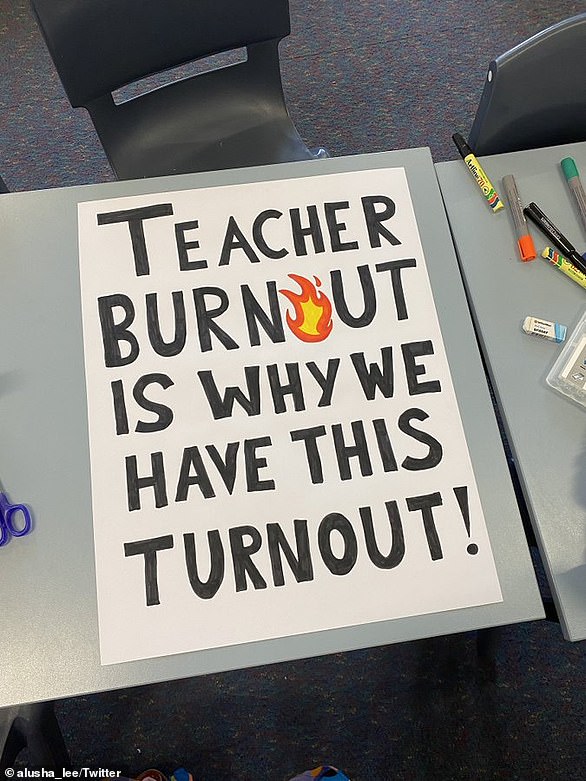 One Sydney teacher shared a sign for the strike which read: ‘Teacher burnout is why we have this turnout!’

‘I left teaching at the end of last term after 16 years of teaching. One of the things that really sticks out to me about the state of teaching right now is the amount of teachers choosing to drop down to part time. In fact, it’s getting so bad that some schools are now refusing part-time teaching staff, because it’s a nightmare for timetabling and student outcomes.

‘Of course, the underlying issues that are causing the exodus away from full-time teaching aren’t being looked at by the governing departments; rather, they’re just throwing in new grads in the hope that a few swim rather than sink.’

‘I’m a state high school teacher in QLD, finishing my fifth year of rural and transferring to metropolitan. Pay is good. Super and salary sacrificing is good. I like that I can structure my life around a pretty consistent schedule. I love teaching. But workload is killing me.

‘It’s not even the classroom stuff (drafting, grading, reporting, the differentiating for students of varying ability); it’s the mountains of administrative paperwork that go with it. Teaching and learning plans a term in advance, with all resources created and loaded to a one drive account for possible home learning, records of every adjustment made to every worksheet, assessment, and activity for each kid recorded in OneSchool.’

‘The real issues will only be masked temporarily by better pay. My summary of the real issues is this: Kids are much harder to teach these days. The work environment between teachers and support staff is very toxic. Layers upon layers of ‘new’ stuff have been introduced to waste teachers’ time on the job.

‘Eventually we will have no teachers because who in their right mind wants to pay for a degree and then wind up in that environment.’

‘ In addition to the excessive admin workload, one of the biggest issues with attracting and retaining high-quality teachers is the top end of the scale.

‘After five years, the scale in NSW tops out at around $107K. So a five-year teacher, who is essentially still mastering their craft, is paid the same as a 20-plus-year expert. An all round 10%–15% won’t hurt attracting new talent, but they really need to stretch the scale out at the top end, or find a way to reward high-quality teachers properly.’ 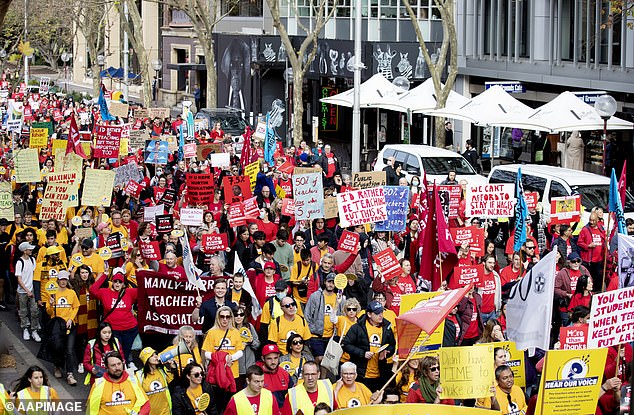 Education staff carried signs with a colourful array of memes and images of famous artists, movie stills and cartoon characters from The Simpsons and SpongeBob during their protest in Sydney.

Others had blunt, but inventive, messages slamming the government over teacher shortages and pay.

One teacher’s amusing sign read: ‘I could make more $ on this pole’.

Another sign referenced Hogwarts – the fictional school from the Harry Potter franchise. ‘This wouldn’t happen at Hogwarts,’ it said.

Another protester held up an image of Simpsons character Edna Krabappel – Bart Simpson’s school teacher on the beloved animated series – slumped against her chalkboard. ‘Overworked’ is written in chalk above her head.

An animated boiling kettle was spotted on one sign with the creative phrase: ‘Teachers have reached boiling point.’

Another protester held a picture of a amusing meme which featured stills of the characters Miss Honey and Miss Trunchbull from the kids movie, Matilda.

Written next to the image of Miss Honey is: ‘What I thought teaching would be like.’ Then written below, next to the still of Miss Trunchball, is: ‘What teaching actually feels like.’

One striker had a hand drawn image of a unicorn and claimed that, like unicorns, well-paid teachers ‘don’t exist’. 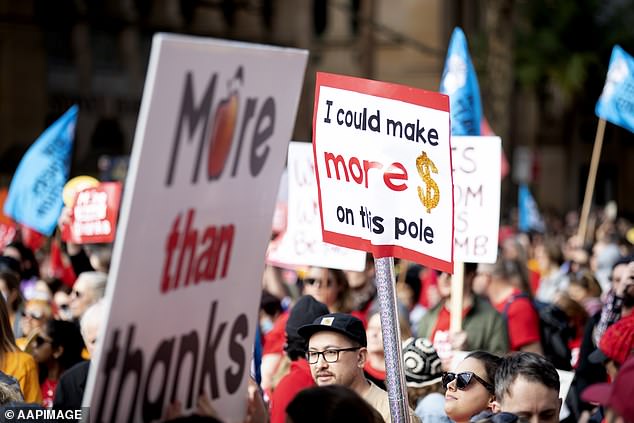 One teacher’s sign read: ‘I could make more $ on this pole’ 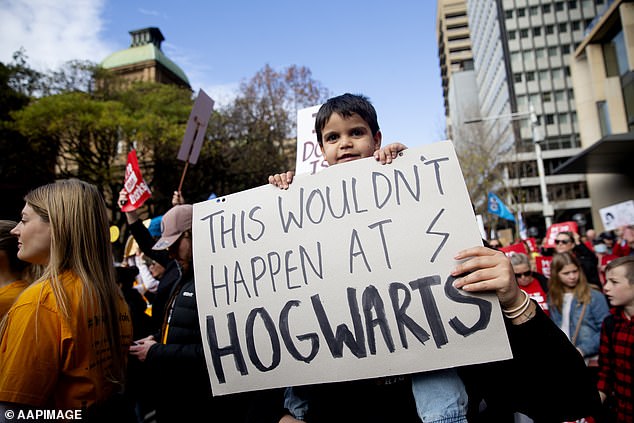 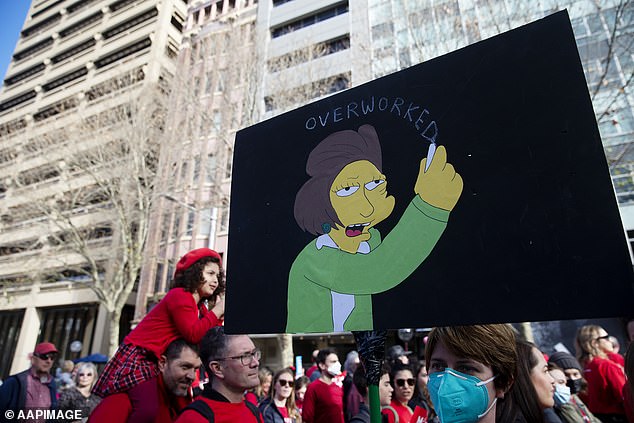 Other teachers had pictures of characters from the beloved animated cartoon The Simpsons to illustrate their point. Above, Edna Krabappel 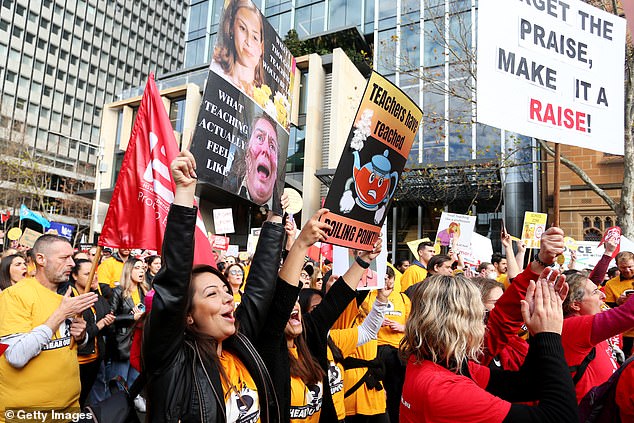 Education staff held signs that featured memes and colourful imagery, while others resorted to more direct messages to the NSW government 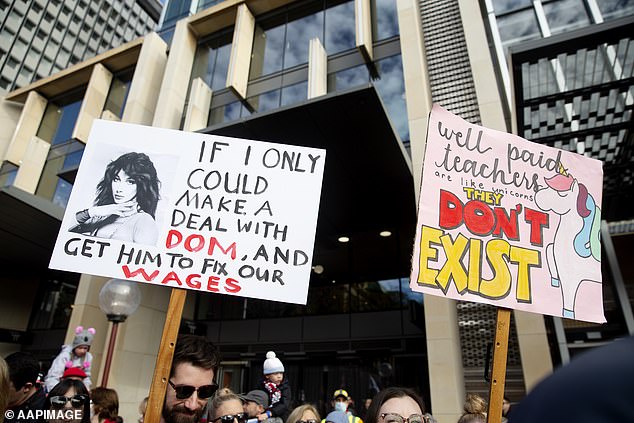 One striker had a picture of a unicorn and the words: ‘Well paid teachers are like unicorns, they don’t exist’

Salaries for public school educators have reportedly gone up nearly 30 per cent in the last 11 years.

‘We have a crisis in the form of a teacher shortage, a crisis that is the government’s own making,’ NSW Teachers Federation President Angelo Gavrielatos said on Wednesday. 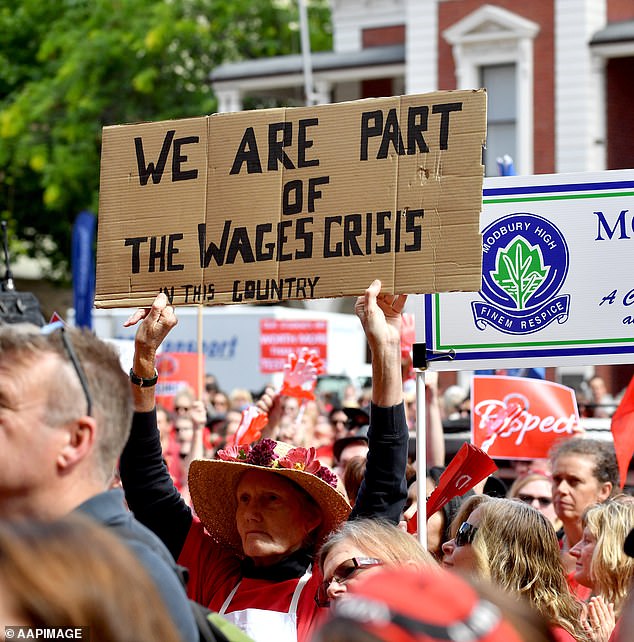 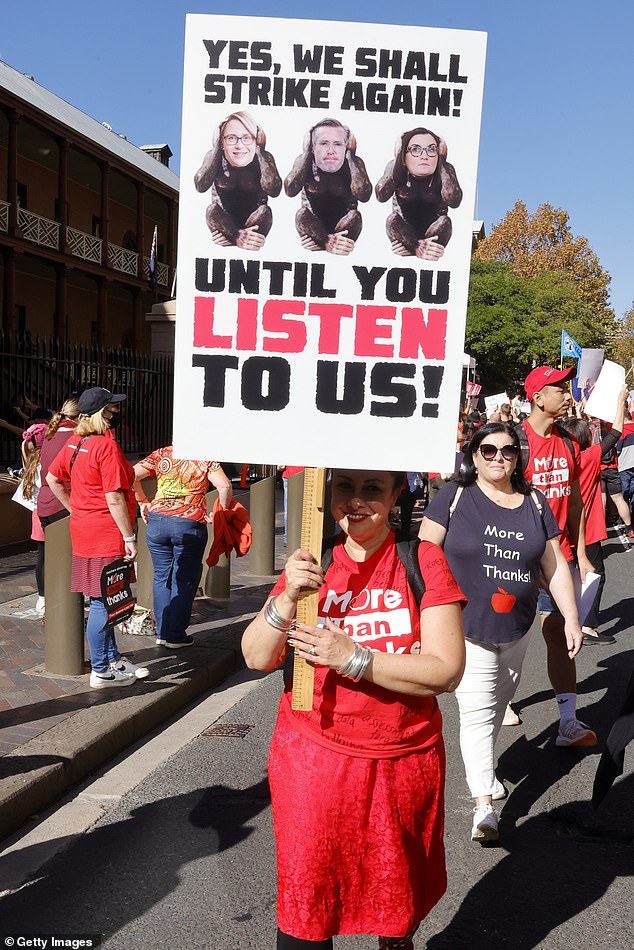 WHY ARE THERE STRIKES?

Teachers are striking for 24 hours from Thursday

They’re angry at a NSW budget that offered no more than a three cent pay rise this year, with the possibility of 3.5 per cent the following year

‘The government has known for years the causes of this crisis: uncompetitive salaries and unsustainable workloads.’

Mr Gavrielatos said there were 1906 job vacancies in schools across NSW this year, up 67 per cent from the same period last year.

The union says more than 20,000 of its members showed up in Sydney’s CBD on Thursday.

One of them was Peter Kitonga, 50, a legal studies teacher at Sir Joseph Banks High School in Revesby in western Sydney.

“I have been working as a public school teacher for 13 years and our salaries have not kept up with inflation,” he told AAP.

“It’s the duty of the government to ensure that students have a qualified teacher in front of them. You can bring teachers on board by giving them better pay.”

The Federation’s head Angelo Gavrielatos said Premier Dominic Perrottet’s unwillingness to negotiate with the union was “failing teachers and … students”.

He described the chronic shortage of teachers on Thursday as ‘a classroom crisis’.

‘Thousands of classes are uncovered across the state because of a lack of teachers,’ he said.

‘The premier’s three per cent salary cap is a ‘take it or leave it’ proposition that is far below inflation.

‘He is ignoring the evidence that current salary levels are turning people off teaching and a significant increase is urgently required.’

Debbie Jones, a Catholic primary school teacher from North Sydney with more than 40 years of teaching experience, said she was worried for the future of her profession.

‘Teachers are just running on empty. We’re all exhausted,’ she told AAP.

‘There’s just not going to be any (teachers) left. Pay teachers what they’re worth and they will come,’ she said.

But Education Minister Sarah Mitchell was disappointed by the decision to strike and said it was politically motivated.

Ms Mitchell defended the government’s public sector wages policy, calling it the most generous in the country.

‘Teachers are out the front (of parliament) pleading with a government that refuses to listen,” she told reporters.

‘Our children are suffering in education outcomes because the government refuses to hire teachers.’