A dread-inspiring weather map has revealed the 400km stretch of Australian coast set to be hammered by a megastorm bringing more flooding hell for NSW locals.

The severe weather warning is for a large part of New South Wales, from just south of Newcastle, but including the lower Hunter Valley, south to Ulladulla, and also 200km inland to the Central Tablelands towns of Oberon and Lithgow.

The alert for heavy rainfall, possible flash flooding, wind gusts of up to 90km/h and landslides was issued on Friday afternoon and applies from Saturday onwards.

The warning comes as Melbourne was hit by a deluge which brought half the city’s average monthly rainfall in just one hour. 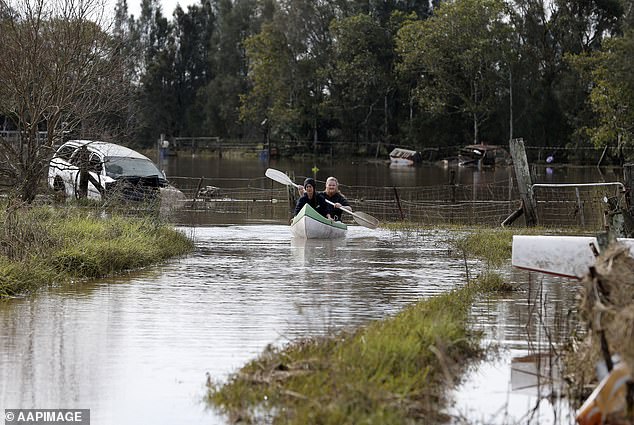 The weather office issued a warning for flooding in many of NSW river systems in coming days (Pictured two people use a kayak to navigate their driveway at Millers Forest, NSW after flooding in July 2022)

Sydney, Gosford, Penrith, Parramatta, Katoomba and Wollongong are all in the path of the storm from Saturday afternoon, as are dozens of smaller towns in heavily populated areas like the Central Coast.

Most of them have been forecast with 100 per cent chance of rain for Saturday.

The storm will also reach deep into the lower Hunter, hitting towns including Maitland and Singleton, which also both have a 100 per cent chance of rain for Saturday.

Canberra will also see a wet weekend but will not see the same amount of rain or the high winds that coastal towns and further north will experience.

The bleak weekend weather warnings came after it was revealed Sydney has this week smashed its all-time rainfall record of 2,194mm set in 1950.

While much of the state was already copping rain on Friday afternoon, the worst of it is due to come late on Saturday afternoon, lasting until Sunday. 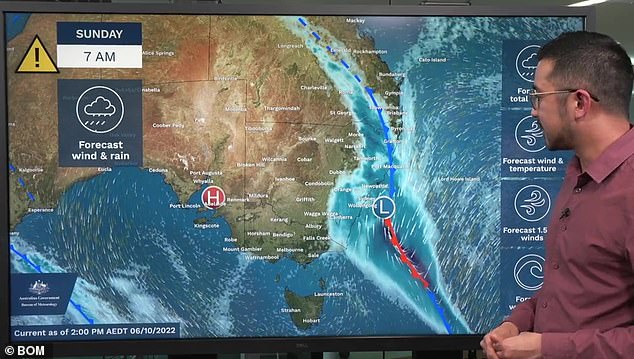 While much of the state was already copping rain on Friday afternoon, the worst of it is due to come late on Saturday afternoon, lasting until Sunday 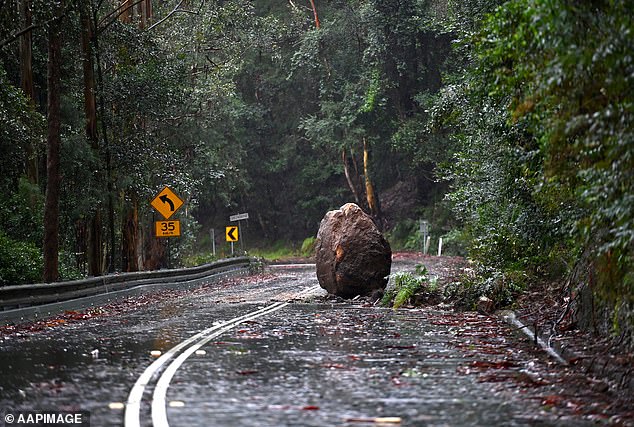 The alert was for heavy rainfall, flash flooding, wind gusts of up to 90km an hour and debris on roads was issued on Friday afternoon and applies from Saturday onwards (Pictured, a boulder blocks Wiseman Ferry Road)

‘Six-hourly rainfall totals between 30 to 50mm are likely, with isolated falls above 70mm possible,’ a statement from the Bureau of Meteorology said.

It added that the heavy rain could bring ‘landslides and debris across roads’ in all affected areas.

The BoM also warned rain from Friday onwards could lead to flooding in river systems across a huge part of the state.

‘This is likely to cause renewed flooding in the NSW inland rivers and the Hunter, Shoalhaven and Greater Sydney districts,’ a BoM flood watch warning issued on Friday said.

‘Renewed major flooding is possible for the Gwydir, Namoi, Macquarie, Belubula, Lachlan and Bogan Rivers and Mandagery Creek from Friday into the weekend.’

The storm will also see temperatures tumbling to an unseasonable 17C top in Sydney on Sunday,

‘A surface trough is drawing humid, tropical air over New South Wales. A low pressure centre is expected to deepen within the trough during Saturday and then cross the coast late Saturday or early Sunday.’

The storm is likely to head offshore by late Sunday.

Brisbane and the Gold Coast are also forecast to see some rain, but nowhere near the same amount as further south.

On Friday in Melbourne half of October’s average rainfall fell in one hour as some suburbs received 30 millimetres of rain in as little as 20 minutes on Friday.

There were fears a private dam in Craigieburn could collapse, with emergency services and engineers on site and a nearby major road shut down as a precaution.

Authorities are bracing for major flooding on Saturday along the Avoca River at Charleton, northwest of Bendigo. 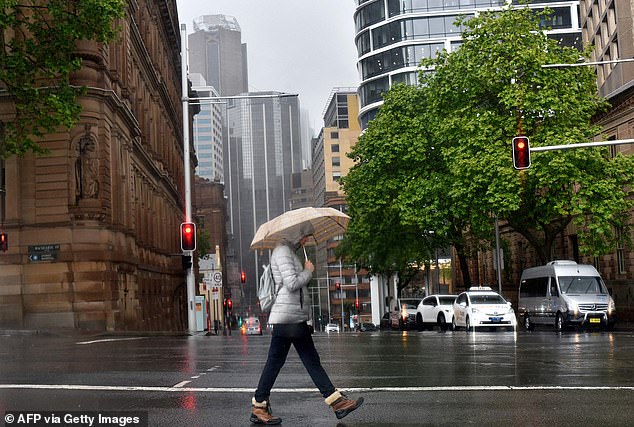 A woman shelters from the rain under an umbrella while crossing a street in Sydney on October 6, ahead of another wet weekend 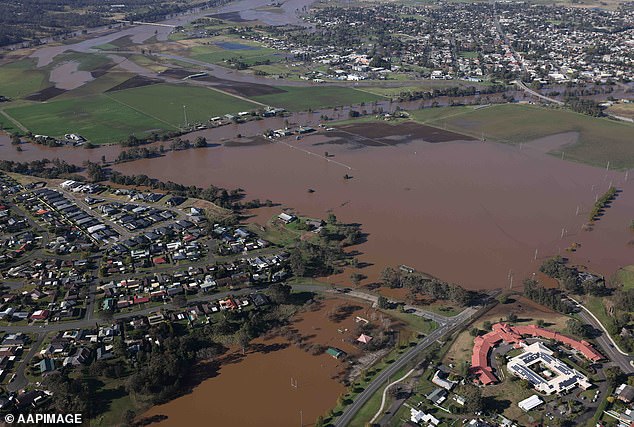 The Hunter Valley town of Singleton named in the weather office’s severe weather warning for Saturday and Sunday (Pictured, flooding at Singleton in July 2022)

A major warning was issued for the Loddon River at Laanecoorie, east of Bendigo.

The deluge on Friday followed a night of wild weather, with the SES receiving more than 600 calls for help in 24 hours.

The Evoca and Maryborough areas in regional Victoria received 50 to 65mm in an hour – roughly one month’s worth of rain.

Areas around Frankston, Bayside, Woodend and the Maryborough district were also hard hit.

Two cars became submerged in one metre of water in South Melbourne while other vehicles became stranded at Seaford, in the city’s south-east.

“We know the single largest death or cause of death in flooding is people attempting to drive through flood waters,” he said.

“Driving through flood waters could be the last decision you make.”

More than half of the calls for assistance related to the impacts of flash flooding such as leaking roofs.

There were over 120 requests for building damage, with most related to fallen trees.

Heavy rainfall was expected to continue in northeast Victoria on Saturday, before conditions ease on Sunday.