A tornado touched down overnight in the NSW town of Armidale, with wild vision showing the twister circling over homes amid an electrifying lightning storm.

Power cuts plunged 4,000 households in the area into darkness, with locals sharing images of golf ball-sized hail stones which battered down on their homes.

Trees and powerlines laid across roads on Thursday night after the supercell storm moved its way across New South Wales before gathering pace over the regional town.

The tornado hit around 11pm, with a severe thunderstorm warning issued by BoM to last well into Friday, affecting swathes of the state for 900km from Inverell down to Moruya.

Armidale locals even reported cars had been flipped over by the wild tornado, as well as houses losing their roofs and terrified families being trapped in their homes. 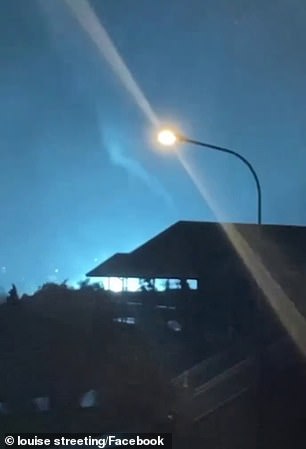 The tornado (pictured, left and right) hit Armidale around 11pm on Thursday night, leaving thousands of locals without power 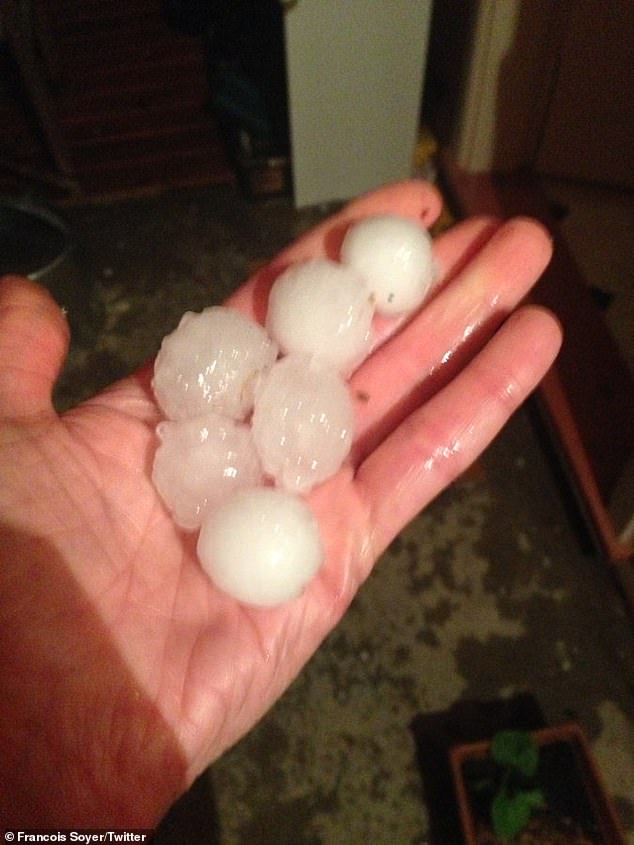 Millions are being warned to buckle down in the face of damaging wind, heavy rainfall and large hail.

The worrying development came hours after Sydney and swathes of the east coast were battered by the ‘very dangerous’ storm which saw a popular Westfield evacuated after its roof collapsed on shoppers.

Damaging winds, large hailstones and heavy rain battered Western Sydney for hours throughout the night, with Penrith and Blacktown copping the brunt of the system before it moved out to sea.

Several fronts moved into the city throughout the night, with fork lightning seen streaking across the harbour.

In the midst of the chaos, NSW Fire and Rescue rushed to save motorists trapped in three vehicles in floodwaters at Merrylands in Sydney’s west. 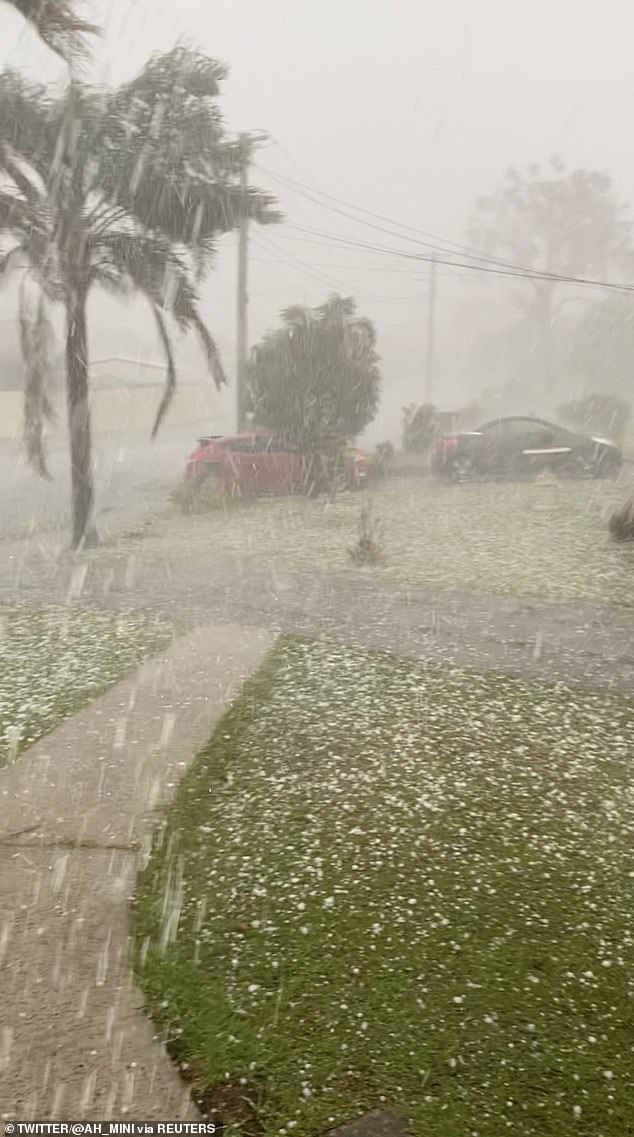 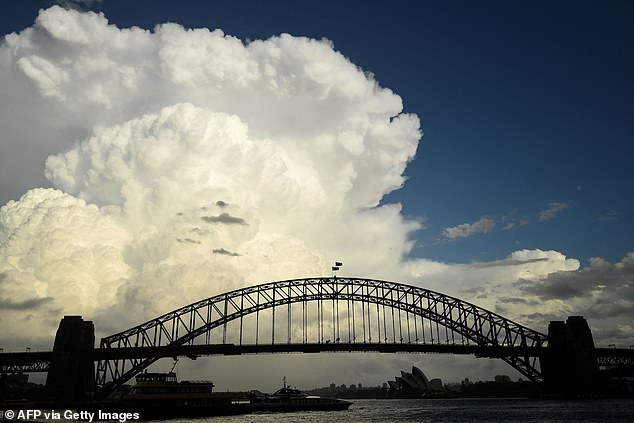 HOW TO STAY SAFE IN SEVERE STORMS

*Move your car under cover or away from trees.

*Secure or put away loose items around your house, yard and balcony.

*Keep at least 8 metres away from fallen power lines or objects that may be energised, such as fences.

*Trees that have been damaged by fire are likely to be more unstable and more likely to fall.

*Don’t walk, ride your bike or drive through flood water.

*If you are trapped by flash flooding, seek refuge in the highest available place and ring 000 if you need rescue.

*Be aware that run-off from rainfall in fire affected areas may behave differently and be more rapid. It may also contain debris such as ash, soil, trees and rocks.

*After bushfires, heavy rain and the loss of foliage can make the ground soft and heavy, leading to a greater chance of landslides.

*Avoid using the phone during the storm.

*Stay indoors away from windows, and keep children and pets indoors as well.

*Stay vigilant and monitor conditions. Note that the landscape may have changed following bushfires.

The Bureau of Meteorology had issued a urgent twister warning to ‘people in parts of the Blue Mountains/Hawkesbury, Greater Newcastle, Gosford, Wyong, Sydney and Greater Wollongong areas,’ on Thursday just after 4pm after a tornado signature was detected on a weather radar.

That warning was later downgraded, hours before a tornado hit Armidale.

Several shocking videos uploaded to social media show water pouring from the the ceiling of Mt Druitt Westfield as shoppers rush for the exits.

In one clip, large parts of the ceiling at Best and Less is seen collapsing sending debris crashing to the ground as water gushes down. 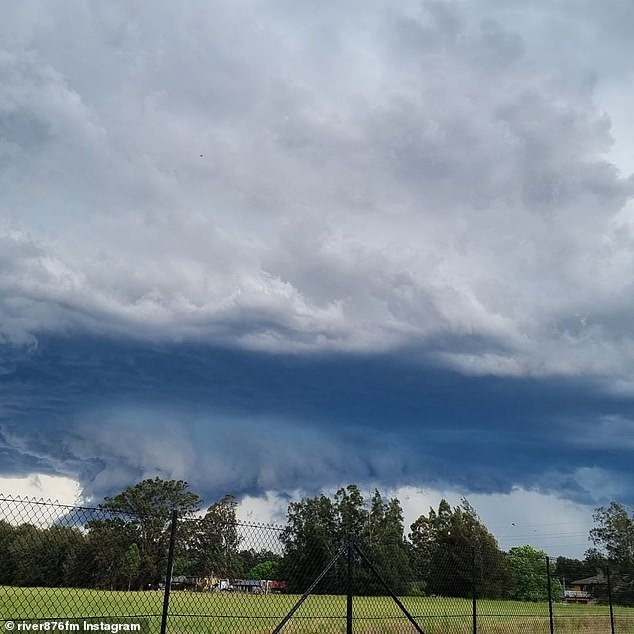 A tornado signature was detected by the Bureau of Meteorology on weather radar just after 4pm (pictured, the storm over Sydney’s west on Thursday afternoon) 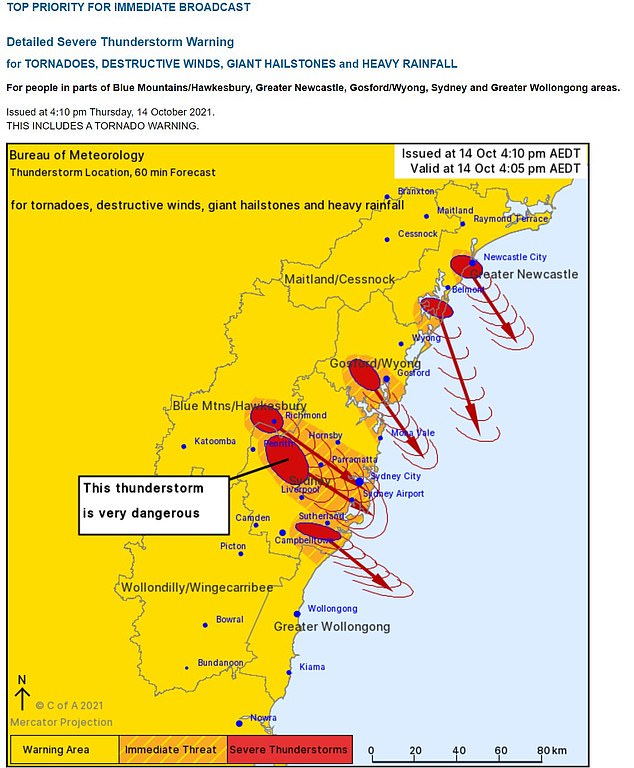 Pictured: A huge lightning strike hits Sydney’s iconic Harbour Bridge on Thursday afternoon as the system moved over the CBD

Photographs also show a clothing store and an an Indian eatery severely damaged by the wild weather, with ceiling ducks scattered across the ground amongst piles of hailstones.

NSW Fire and Rescue said they were called to the scene just after 4.00pm.

‘The rain water seemed to have pooled above the store and the ceiling collapsed,’ a spokespersons said.

‘Everyone inside has been evacuated and there were no injuries.

‘But they are still investigating, including whether others stores might be at risk.’ 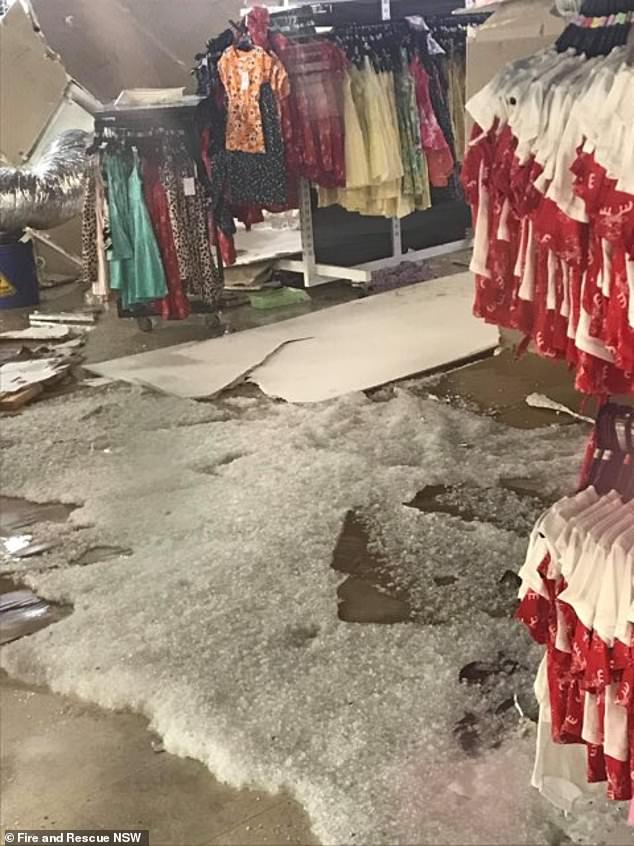 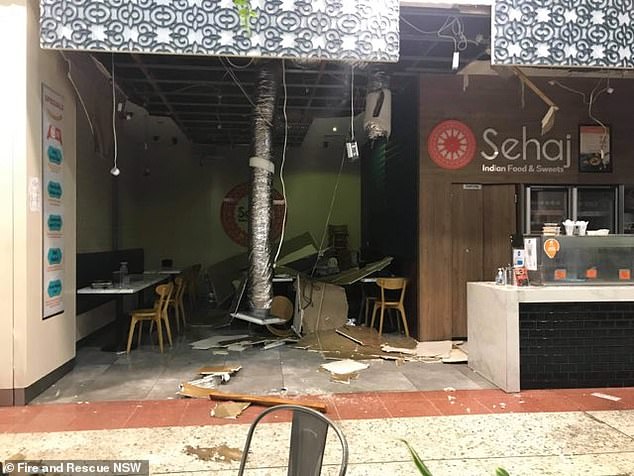 Although electricity has been restored in many areas, blackouts are still continuing in some suburbs into the evening.

‘We’ve had quite an escalating storm situation within Sydney metropolitan area. As of around a half an hour ago, we have seen rotation within a thunderstorm which is moving through,’ she said.

‘We haven’t as yet had any observations on the ground but the signatures that we are seeing on the radar are indicative of something that will produce damaging … wind gusts, large giant hail, again, quite a dangerous situation.’

THE WEATHER IN YOUR CITY THIS WEEKEND